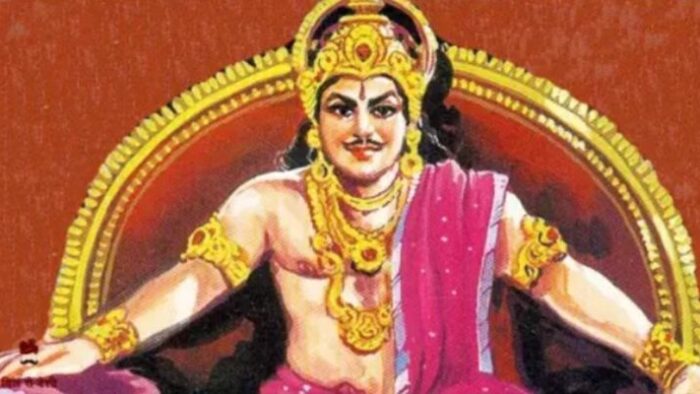 Today is Aja Ekadasi, also known as Annada Ekadasi. A recurring theme relating to vratas is how the observance of fasting saves someone or the other from desperate troubles they have landed themselves in or from some unfortunate curse that has been pronounced on them (which also usually results from a prior wrong they committed). The stories may appear fantastical, but they simply illustrate the workings of karma and in that sense are more true and real than our mundane reality.

The katha associated with Aja Ekadasi is about how observing Ekadasi helped King Harishchandra escape his troubles – and he certainly had his share of troubles.

As Sri Krishna narrates to Yudhishthira in the Brahma-Vaivarta Purana, “Any person who fasts completely on this day and worships Hrishikesha, the master of the senses, such a person becomes free of all reactions to his or her sins. Even one who simply hears about this Ekadasi is freed from past sins.”

Sri Krishna then tells Yudhishthira the story of King Harishchandra. This is a famous story, told in multiple variations across the Vedas and in the Puranas and Itihaasa. The core story goes back to the Aitareya Brahmana, which tells us that King Harishchandra had one hundred wives but no son. As suggested by Narada Muni, the king prayed to Varunadeva for a son. Varunadeva granted the boon in exchange for a vow that one day Harishchandra would make a sacrifice to Varunadeva.

The boon bore fruit and a son, Rohitashva, was born to King Harischandra. After he was born, Varunadeva came to the king and demanded that the child be sacrificed to him. There is a profound dramatic irony to this part of the story that teaches us a great lesson – karma cannot be avoided. Asking for this boon or that boon may result in a temporary gain, but there will always be a price to be paid. In short, be careful what you wish for and what you pray for to the great ones – acharyas / rishis and devas alike!

The king deflected the request again and again but finally had no choice but to agree when Rohithashva reached adulthood. Rohitashva refused to be sacrificed and ran away to the forest, advised by Indra to never consent to being sacrificed.

In punishment, Varunadeva cursed King Harishchandra with stomach illness. After roving around the forests for six years, Rohitashva met a starving brahmana named Ajigarta, who had three sons. Rohitashva offered Ajigarta one hundred cows in exchange for one of his sons to be sacrificed to Varunadeva in Rohitashva’s place. Ajigarta was fine with that, so long as his eldest son was not sacrificed, and his wife was fine with it, so long as the youngest son was spared. Accordingly, Shunahshepa, the middle son, was selected to be sacrificed.

Varunadeva agreed to the exchange. Four priests were invited to conduct the sacrifice: Ayasya, Jamadagni, Vashishtha, and Vishvamitra. All refused to sacrifice the poor boy. Ajigarta then offered to perform the sacrifice himself in exchange for another hundred cows. King Harishchandra agreed.

At the moment of the sacrifice, Shunahshepa prayed to the Rig Vedic deities for deliverance. His last hymn was to Ushas, the deity of the dawn, and then his bonds were loosened and the king cured of his stomach sickness. Vishvamitra then offered to adopt Shunahshepa as his eldest son, and he readily agreed, reviling the father who had so cheaply sold his life.

A similar variation of this story appears in the Ramayana, where King Ambarisha has been substituted for King Harishchandra.

The Markandeya Purana then picks up the tale and retells it in a different fashion, a story narrated by four wise birds to Jaimini Rishi in response to his question about why the sons of the Pandavas were slain so mercilessly at the end of the Mahabharata war.

According to the Markandeya Purana, King Harishchandra was born in the Treta Yuga. He had a queen named Taramati and a son named Rohitashva. Once, while hunting, he heard a woman cry for help. The sound was an illusion created by Vighnaraja, the deva of obstacles, who was trying to interrupt the meditation of Vishvamitra. Vighnaraja then entered the body of King Harishchandra and started insulting Vishvamitra. His meditation rudely interrupted, Vishvamitra demanded dakshina from the king for his forthcoming rajasuya yajna.

Specifically, he demanded that king give him everything the had except for himself, his wife, and his child.

(Interestingly, in the Puranic version, Harishchandra is completely innocent at the start of the story. The Devi Bhagavatam has a variation of the beginning, in which Vasishtha is praising the qualities of the king and Vishvamitra objects, recounting how the king had allowed Shunahshepa to be sacrificed in the past. Vishvamitra then decides to test the king, which then triggers the rest of the story.)

The king complied and gave all of his possessions, including his clothes, to the sage. As he was about to leave the palace with his family, Vishvamitra demanded another payment of dakshina. King Harishchandra said he did not have anything left but promised to make another gift within a month.

The king asked him what he wanted in payment. In response, Vishwamitra said “Give me all that you have except yourself, your wife and your child.” Harishchandra agreed to the demand. He let go of all his possessions – even his clothes. Vishwamitra soon demanded another donation. Harishchandra said that he did not have any possession left but promised to make another donation within a month.

The king and his family then started living in abject poverty. The subjects of the kingdom followed him away from the kingdom out of loyalty and love. Vishvamitra started beating the queen with a stick. When the dikpalakas, the guardians of the directions, saw this, they condemned Vishvamitra. The sage cursed them to take birth as human beings and then they were born as the sons of the Pandavas and Draupadi.

Almost a month had passed. Harishchandra traveled to Kashi only to find Vishvamitra already staying there. The sage demanded the dakshina. Harishchandra had one day left to make good on his promise. His wife suggested that he sell her to get some money. The king agreed and sold her to an elderly man. Rohitashva refused to let go of his mother, and he, too, was sold to that same elderly man.

Harishchandra started working for the chandala at the cremation grounds. One day, Harishchandra remembered his past lives and realized that he was suffering now due to sins he had committed in the past. He woke to see his wife, the queen, crying before him. She held the corpse of their son, Rohitashva, who had died of snakebite. Devastated, Harishchandra contemplated suicide but realized there would be no escape from suffering in his future lives either.

As the queen prepared to cremate the remains of their son, Harishchandra refused to let her do so without paying the fee that his boss, the chandala, charged for all cremations. At that moment, all the devas appeared, led by Dharmaraja and accompanied by Vishvamitra, praising his honesty and integrity. They invited the king to join them in Swarga.

Harishchandra refused to go to Swarga without his loyal subjects, explaining that they shared in the merits of his actions and that he would only go if they accompanied him. He requested Indra to allow his subjects to go to Swarga at least for one day. Indra consented.

All this time, Vashishtha, the rishi of the king’s dynasty, had been in a twelve-year period of meditation. When he heard about the tragedies that had befallen Harishchandra during this period, he began battling with Vishvamitra. Ultimately, Brahma pacified him, explaining that Vishvamitra has only been testing the king and had actually helped him reach Swarga.

The Mahabharata notes that Harishchandra was the only mortal king who found a place in the assembly of the devas. His story also presages important elements of the story of the Pandavas – Yudhishthira gambling away Draupadi; Yudhishthira refusing to enter Swarga without the dog who had faithfully accompanied him.

The Ekadasi katha, narrated by Sri Krishna to Yudhishthira, picks up the story from when the king was in the depths of despair. As he was working in the cremation grounds, one day, Harishchandra saw a great sage walking by. Harishchandra felt relieved, knowing that such brahmanas were created to help others selflessly. Harishchandra prostrated to the sage, who was the great Gautama Muni.

Gautama Muni heard the poor king’s story in shock, saddened to see this once-powerful king reduced to collecting clothes from the dead.

Gautama Muni told the king, “O king, during the dark fortnight of Bhadrapada, there occurs an especially meritorious Ekadasi named Aja (Annada) Ekadasi, which removes all sins. Indeed, this Ekadasi is so auspicious that if you simply fast on this day and perform no other austerity, all your sins will be nullified. Fast on this day and remain awake through the night. If you do so, all the reactions of your past sins will come to an end. O Harishchandra, I have come here because of your past meritorious deeds. All good fortune to you in the future!”

With that, the rishi disappeared.

King Harishchandra observed the vrata as instructed by the rishi on Aja Ekadasi. As a result of the power of this vrata, he was reunited with his wife and son, who was now brought back to life. Kettle drums were beat happily in the heavens, and the devas showered flowers upon the king, the queen, and their son. He regained his kingdom. When the time came for him to pass on, the king, his family, all his relatives, and all his subjects, too, went together to Swarga.

Sri Krishna concludes the narration – “O Pandava, whoever fasts on Aja Ekadasi is surely freed from all his sins and ascends to the spiritual world. And whosoever hears and studies the glories of this Ekadasi achieves the merit gained by performing a horse sacrifice.”