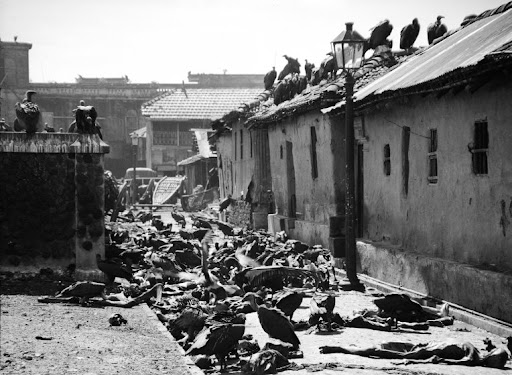 “Either a divided India or a destroyed India” were the bloodcurdling words uttered by the leader of the All India Muslim League, Muhammad Ali Jinnah, the words that sent chills down the spine.  Thus Pakistan came into existence – the very country born after dividing and destroying India through a bloodbath of many a thousand innocent people or should we not call it genocide of the Hindus?

And this extermination began with an official announcement of a day that was declared as the Direct Action Day slated to be observed on 16th August, 1946, i.e. just a year before our actual independence. This antagonistic attitude caused a massive riot resulting in thousands of innocents losing their lives while rending a million homeless.  Under the garb of a Protest March, a particular community known for their communal onslaughts, launched an assault with sheer ruthlessness.

During the Lahore resolution in 1940, the Muslim League argued for a separate territory with Muslim majority areas of Northwest and Eastern part of India should be constituted as ‘Independent States’.

Muslim League was firm on this demand of separate Muslim independent state.

In the meantime, British Government had sent Cabinet Mission to India in 1946 to transfer the power to the Indian leadership on 16th May, 1946. The proposed structure was based on a
three-tier system i.e., a centre, groups of provinces and provinces. Back then, the Indian National Congress and Muslim League were the two largest political parties of British India and had the power to construct New India as they had the largest members in the Constituent Assembly of India. These ‘groups of provinces’ were actually the proposed new independent land according to the demands of Muslim League.

On 10th July, 1946, the then Congress president Jawaharlal Nehru, had declared in Bombay (now Mumbai) via a press conference that it might change and modify the Cabinet Mission Plan according to the then situation and agreed to participate in the Constituent Assembly. Now the Muslim League refused to participate in the Constituent Assembly as they feared that their demands would be undermined causing Jinnah to adopt a more rigid stance for ‘Independent and sovereign’ separate Muslim majority land dividing India and rejected Cabinet Mission plan for transfer of power to an Interim Government.

On 29th July, 1946, Jinnah called for a press conference and declared a resolution to describe his stand that they are “preparing to launch a struggle” until their demand for a separate Muslim majority land i.e., Pakistan was considered. He further warned that they would launch “Direct Action” to grapple for their separate independent and sovereign Muslim Land.

His rigidity for Pakistan might be shown by the following statement: “Go to the Congress and ask them their plans. When they take you into their confidence I will take you into mine. Why do you expect me alone to rib with folded hands? I am going to make trouble”. It proves the insensitivity and irresponsibility and a separatist mindset of the Muslim League as well as of Jinnah.

The day of 16th August, 1946 was declared as ‘Direct Action Day’ and challenged the Congress leadership, “We will either have a divided India or a destroyed India”. This statement shows their rigidity, their enmity and their hidden agenda, their mentality to grab the power in terms of lawlessness, challenging the entire British system to achieve their purpose – a purpose for their own country, a religion based partition of a thousand years old civilization.

So by observing 16th August, 1946 as “Direct Action Day”, Muslim League proved that they were an enemy of India and its people. They wanted to destroy India in the name of birth of Pakistan. They had shown their utter hatred towards the Indian society. They had not only warned, but also fulfilled their words. The tragic consequences had ruined social and communal harmony, thereby demolishing forever the Hindu-Muslim Unity and Brotherhood theory. They had acted just like the separatist or even worse, like like a terrorist outfit. Demand for establishment of a new state is perhaps not a crime but to blackmail a civil society with dire consequences is a definite act of terror. It is reported that more than 4000 people were killed on that day and lakhs of people became homeless. Kolkata had experienced its most dreaded day of bloodstains.

In fact on 16th August, 1946 there was a huge gathering in Kolkata, which may be described as the largest Muslim congregation of the then Capital of Undivided Bengal. North Central Hindu majority and financially powerful areas of the city were attacked from the morning of the very same day from 10 AM onwards. The shops were forced to close shut, several reports of hooliganism, stabbing, pelting of stones in the area of College Street, Collotolla, Burrabazar, Kalabagan, Harison Road were reported. Muslims had started gathering around the then Ochterlony Monument, now Shaheed Minar, adjacent to the Maiden areas since midday prayers and the meeting began at around 2 PM and crowds were addressed by the principal speakers like Khawaja Nazimuddin and the then Prime Minister of Bengal province, Huseyn Shaheed Suhrawardy. The gatherings were relatively peaceful and did not gear for any provocation, but the speakers Nazimuddin and Suhrawardy instigated the assembled Muslim people as they misinformed the crowd intentionally that Muslims were being attacked first, were injured and they needed to retaliate and they should do so in self defense. So the tension brewed and Muslim leaders fired up the situation for the worse. Thus they acted upon and executed their plan to bleed and divide India.

Some sources estimate that nearly 30,000 people gathered at the Maidan area of Central Kolkata that day while others estimate nearly 100,000, but whatever the number the aftermath of the riot left deep scars that would never heal with time.  It was a planned barbarous butchery of humans – a genocide. After listening to the provocative speeches of the Muslim leaders, uneducated and mostly poor Muslims started looting and murdering Hindus. It is reported that Chief Minister Suhrawardy had that much influence in the police headquarter at Lalbazar to restrain the military and police force to act aptly, but really were the Muslims on the road attacking the Hindus local Muslims? The answer is no. There were lorries of non-Bengali Muslims brought from different parts, equipped with arsenal like the brickbats, lathis, bottles, swords, choppers etc. Only after 6 PM curfew was imposed and at 8 PM forces were deployed, but before that a planned Hindu genocide took place under the aegis of the Muslim leaders demanding a separate land for Muslims. The riot continued for nearly a week and on 21st August, Bengal was taken under direct Governor’s rule. But by then, Kolkata was devastated with so many riot affected people wherein they either lost their relatives or were rendered homeless.

Here some pertinent questions arise – Jinnah called for a Direct Action for all over India but why only Kolkata was so badly affected? Were British Troops not available to control the riots and to save Hindu lives?

On 21st August, 5 battalions of British troops were deployed in the different parts of the city. The then Viceroy, Lord Wavell alleged that to control the situation, troops should have been called in earlier and British Troops were available for any situation at that time. The riots were coming to an end by 22nd August. Suhrawardy used all his tricks to delay the deployment of British troops and prevented any timely action.  The then British Army was in the Sealdah Rest Camp and he influenced all the officials to not act appropriately and the riots continued under his conspiracy and machinations. People died due to inaction of the army and police. It is even reported that Suhrawardy was in the police control room of Lalbazar with his accomplices and influenced the local officials to not take relevant timely actions. It is also alleged that the then Viceroy of Bengal, John Burrows also had not taken actions to restore law and order to save the helpless people.

Kolkata had faced the ugliest riots in the context of the Direct Action Day and the deep rooted cause for this was evident. Jinnah led Muslim League took a resolution to reject the Cabinet Mission Plan of power transfer to India on May 16th and called on Muslims from all over India to protest against the Cabinet Mission Plan. Though the plan clearly stated for a separate Muslim Land but Jinnah needed absolute conformity and for this deal he wanted assurance from the authority. He was ready to destroy India in exchange of confirmation of their demand. Direct Action Day was observed throughout India like Northwestern provinces like Punjab, Sind, in cities like Karachi, Lahore, Dhaka, but riots emerged only in Kolkata.

Kolkata had a different picture then, the gateway of Eastern India, an affluent Economic zone, rich Industrial belt, Capital of Bengal Province which was ruled by the Muslim League. Muslim League was in Power under a regime of provincial autonomy which was introduced in 1935. Congress and Hindu Mahasabha were the oppositions there. Bengal compromised of 54% Muslims and 44% of Hindus (1941 census) and this was the main reason for League Coalition Government then. The Eastern part of Bengal Province had a clear Muslim majority which is now Bangladesh and Hindu majority prevailed in the western part of Bengal Province which is now West Bengal, a state of India. Kolkata had a clear Hindu majority with 73% of population and was influenced by the Marwari and Gujarati communities who were the economic backbone, not only for Kolkata, but for the entire Bengal. The areas where riots took place during the Direct Action call of Jinnah – the Northern and Central part of Kolkata were predominantly Muslim dominated areas. These Muslims were poor, non-Bengali speaking and had a connection with underworld, and they carried out assault against the Marwaris as they were trying to run a parallel economy. So it is very clear that in the name of Direct Action Day, it was a fight for control over the economy of Kolkata and a wider plan to include Kolkata in the future Pakistan. The entire day including the North Western part of India and Eastern part of Bengal province had followed the peaceful demonstration, no riots were reported. No violent outrages were seen in the cities like Karachi, Hyderabad (Pakistan), Lahore or even Dhaka. This is because all these cities were Muslim majority and were already confirmed to be appended into future Pakistan. But for Kolkata, they had their suspicion, their doubts. Kolkata was Hindu-dominated and hence had to pay a heavy price with their blood.  Hindus had to face the consequences of not merging with Pakistan.  Kolkata paid heavily with their lives and property for not affixing to Pakistan and sadly this darkest chapter in history remains buried – never talked about, never taught, never even whispered in this lively city, but then this riot is nothing short of ‘The Great Calcutta Killing’.