Dukh, Depression and Journeys of Life- Part V- Bhagawad Gita and the Lockdown

One of the vividest memories that I have from childhood is seeing my parents praying contemplatively in our tiny Mandir at home with their eyes fixated on the scriptures they were reading as their bodies rose and fell slowly with the rhythm of each deep breath. Mother was a stickler for discipline, she wouldn’t even answer phone or doorbell during this time. She would glare at us ominously if we got a little too raucous. My father on the other would carry on with the world as if it was not an interruption but an extension of his ritual.

Our Mandir was a minimalist walnut colored wooden box with a slanting roof, the kind that you see commonly in the hills. It had two main clay idols: a sky blue hued Shiva ,with his hair loosened casually on his shoulders -half smiling and half meditating, and a standing idol of Krishna playing flute with a hint of mischief in his eyes. Father used to read a tan coloured hardcover book: Shreemad Bhagvadgeeta, the title said. There were no fancy pictures or ornate calligraphy on it. He used to read it twice every single day. I sometimes wondered if he didn’t get bored reading it every day. “No, its meaning changes with your state of mind, so every shloka is new every time I read it”, he would say. It was too esoteric for me to comprehend then. But I remember the fragrance of the book. Its yellowed pages smelled of incense sticks — mogra, sandal and lavender. The pages were brittle, and the book’s binding was fragile. It has survived many life altering events. Shifting of home, our marriages, mom’s long illness and her eventual demise. The only thing that remained my father’s constant companion has been his Bhagvadgeeta.

Growing up in a deeply religious family, I went through deeply religious and equally deep atheist phases in life. I had read Shiva Purana, Ramcharitmanas, Durga Saptashati and several other scriptures even before i had become eligible to vote. But nothing stood out for me as much as Geeta. I was stunned by the philosophy (admittedly I would have understood very little at that time). The impression remained even through my atheist, agnostic and eventually spiritual-not-religious years later in life. During one of the touristy visits to ISCKON, I acquired my copy of Bhagvadgeeta and re read it. It indeed was very different from what I had remembered. Had the content changed or the context, I wondered. It stayed at home in a drawer largely undisturbed for many following years.

Two years ago, my mother fell sick very badly. Stroke, spinal TB, dementia, loss of vision all at once. She was incapacitated partly. At times she could not remember my birthday, sometimes she could not recall her own granddaughter whom she used to adore endlessly. She was going away the way tea diffuses in water, slowly but progressively. It was painful, both for her and us. Father was extremely stoic throughout, just going on through caregiving routine religiously. I never saw him flustered, frustrated or depressed. That was when I realised that he had completely imbibed the message of Geeta thoroughly.

Neither joy nor distress, nothing moved him.

However, I was deeply distressed. I offered to read Bhagwadgeeta to my mother who could no longer read due to loss of vision. She was ecstatic. I used to read the Hindi translation aloud often struggling to keep my tears from bursting out. My voice would choke, and throat would become swollen with repressed sadness. Especially when reading about how death is just migration of soul from one body to another.

Easy for you to say that Krishna, I would tell myself. Thankfully mother used to fall peacefully asleep while listening, saving me embarrassment of finding her son choked with emotion. Now as I look back, I realize, that I was reading Geeta for myself not mother. I was preparing for the inevitable. The inevitable did happen a few months ago. And I remembered this shloka from Bhagvadgeeta as I lit her pyre.

It is her physical body only, not her soul, I consoled myself.

The Corona pandemic came suddenly. Life as we know it went into a suspended animation through the lockdown. I began the first lockdown on a lofty note with plans to stay cheerful, spend time meaningfully etc etc. By the time, a week got over boredom, melancholy and frustration crept in slowly. Just 21 days I told myself. This too shall pass. But alas 21 days were just the beginning. So, when the second lockdown was announced, a sudden realisation dawned upon me. Hey! I have precisely 18 days. Eighteen. Like the chapters of Bhagvadgeeta! I started a project. A project to keep me positively motivated, while also re-enforcing self-discipline. I started posting a few shlokas from each chapter on Twitter. Initially I started with reading Bhagvadgeeta in our mandir at home after lighting the “jyot” in the morning. But that turned out to be difficult to follow through for a multitude of reasons like work related interruptions. Improvising, I downloaded its e-book version on Kindle. I would read a chapter or two (and sometimes only half a chapter) before I retired to bed. The thread of tweets I was maintaining kept me motivated — I didn’t want to fail publicly. But something changed as I ambled along my pursuit. I found myself seeing the issues at work differently. I found that I was having lesser confrontation and even lesser anxiety.

The lockdown is slowly being removed across the country. Corona is still at large around us. But I am no longer panicking about it — well at least not as much. So, what now? My father told me “Why do you need to stop just because 18 days are over? Keep reading Bhagvadgeeta”. Probably I will. Afterall it is a whole new book every time you read it. 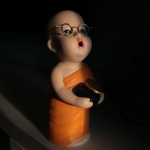