Approaching The Bhagavad Gita Through Sadhana And Adhyaayana 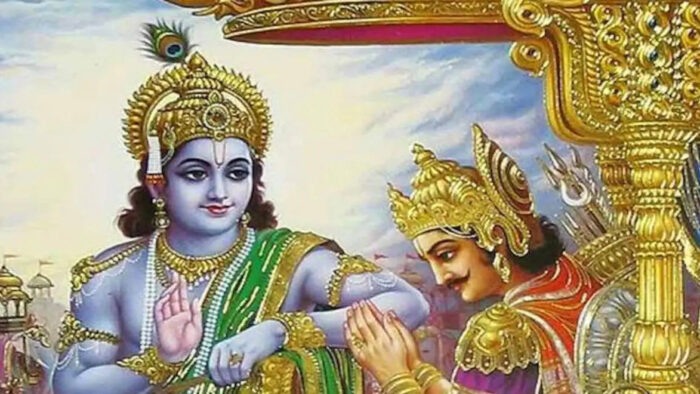 Most of us have at least passing familiarity with the Bhagavad Gita. It is the most easily recognizable and accessible primary text of Hinduism. While technically not shruti (a classification reserved for the Vedas, that which is directly heard), the Gita still contains within it the essence of the Upanishads. As it is said in the Dhyaana shlokas customarily recited before the chanting of the Gita:

(All the Upanishads are cows; the Milker is Krishna, the cowherd boy; Arjuna is the calf; Wise and pure men drink the milk, the supreme, immortal nectar of the Gita.)

Simply reading the Gita or developing an intellectual appreciation of its philosophy is not enough, though. That is just the tip of the iceberg. The goal is to attain the state of Arjuna at the end of the Gita –

(Arjuna said — O Acyuta, (my) delusion has been destroyed and memory has been regained by me through Your grace. I stand with my doubt removed; I shall follow Your instruction.) (Translation by Swami Gambhirananda).

Achieving tadaatmya (a sense of oneness) with the essence of the Bhagavad Gita and undergoing the kind of transformation that Arjuna experiences requires sadhana, a systematic and disciplined practice focused on spiritual cultivation, and adhyaayana, which goes beyond mere study to indicate going above and beyond in the search for the essence or meaning of the text at deeper levels of realization.

In that sense, we should devote a part of every day to rigorous sacred study and spiritual practices related to the Bhagavad Gita. If not daily, then with at least some level of regularity, perhaps on a weekly or monthly basis, we should spend time with the Gita.

How to Chant the Bhagavad Gita as Sadhana

Swami Ramsukhdas-Ji Maharaj was a great mahant of recent times. He lectured and wrote exhaustively on the Bhagavd Gita. His commentary on the Bhagavd Gita, the Sadhak-Sanjeevani, is a unique gem in the ocean of literature on the Bhagavad Gita. The English translation runs over two thousand pages, so detailed and thorough is the commentary.

It is written from the standpoint of sadhana and gives exquisite detailed insights about different aspects of the Gita – for example, the fact that the first syllable in the Gita is Dha- and the final is -rma indicates the status of the Gita as a treatise on Dharma.

It is a book that any earnest follower of the Gita or student in the search spiritual should read. The English translation can be read online here. It can also be found at Gita Press, Gorakhpur.

One wonderful feature of this book is that it has an appendix that provides specific instructions and guidance on the proper vidhi, procedure or process, for chanting the Gita as sadhana, including the nyaasa (the chanting of certain mantras while touching the different parts of the hands and other body parts to invoke the power of the text into one’s being) and preliminary mantras to be recited. I will just touch on a few salient points here.

Swami Ramsukhdas-ji Maharaj describes three sequences of recitation. One, the srshtikrama method, is reciting the Gita from the beginning to the end. The second method, samhaarakrama, is reading from the last verse of the eighteenth chapter to the first verse of the first chapter.

As Swami Ramsukhdas-ji Maharaj explains, the practice of this method yields uncommon power. I experienced this myself when I practiced this method for several months. The verses of the Gita penetrate deeply into one’s subtle body and psyche and generate deep vrttis from within, all reinforcing and strengthening the vrtti of the samputa mantra.

The text of the dhyaana shlokas and phala shruti (conclusory verses glorifying the Bhagavad Gita, to be read at the end of each session of recitation) can be found in Swami Sivananda’s English translation with the Roman text, available here. With this, one can easily establish a regular Bhagavad Gita chanting practice. For aid in proper pronunciation, many audio and video recordings are available online.

Readings on the Bhagavad Gita

Nowadays, there is a profundity of texts on the Gita. For initial reading and study, the English translations by Swami Swarupananda of the Ramakrishna Mission and by Swami Sivananda of the Divine Life Society are good. They are eminently readable and contain simple, clear translations and a bare minimum of commentary.

To take it to a deeper level, it is helpful to read the traditional commentaries from the different darshanas of Hinduism. The Bhagavad Gita is one of the three texts of the prasthana traya, the three authoritative primary texts of Vedanta, with the Brahma Sutras and the Upanishads as the other two of the trio. Each of the major schools of Hindu thought has commentaries on each of these texts which expounds on that particular darshana.

While the Shankara bhashya is the most famously known (and there is an excellent translation of it by Swami Gambhirananda), it is not necessarily suitable for everyone and may not be the easiest commentary on the Bhagavad Gita to start with.

The other two commentaries which are generally recommended are the Sri Ramanuja Gita Bhashya and Sri Madhusudana Sarasvati’s Gudhartha Deepika. The Sri Ramanuja bhashya is from the standpoint of Vishistadvaita Vedanta (qualified nondualism).

The Gudhartha Deepika is from the standpoint of Advaita but is deeply integrated with Bhakti, making it particularly relevant for a wider audience. It also goes into great detail on each and every word of the Gita, including simple words like ‘ca’ (and) and ‘tu’ (but). Of course, there are many more important commentaries, but these are just the ones I’m personally most familiar with and have benefited from in my readings.

There are a few reasons why it is useful to go deep into the traditional commentaries. First, it provides ontological clarity. Each of the traditional darshanas of Hindu philosophy has its own internally consistent worldview and metaphysical framework.

These commentaries put the gloss of a particular darshana (e.g., Advaita, Vishishtadvaita and Dvaita) on the Gita, which provides the sadhaka an integrated perspective and approach to understanding the Gita.

This deepens and strengthens one’s own understanding and shraddha in one’s sampradaya or tradition. It is not that one darshana is correct and the other is wrong – different darshanas are suitable for different people. Also, these commentaries are not just dry philosophy.

They are enlivened by the blessings of the acharyas and the tradition and lineage which they represent.

In steeping oneself in the study of these texts with sincerity and shraddha, the blessings of the tradition will also come and act as a tremendous aid in the quest for realization.

Finally, through the study of different commentaries, one develops an appreciation of the rich nuance and depth of the Bhagavad Gita – how it can be beautifully understood and interpreted in different ways and how each such take can lead to its own insights.

The middle six chapters deal with bhakti and Iswara anugraha, which facilitates the transition from karma to jnana. He also frames the three sections in terms of the mahavakya Tat Tvam Asi (Thou art That) – the first six chapters clarify the ‘Thou’ (Tvam); the second set of chapters address the ‘That’ (Tat) and the third set of chapters reveals the meaning behind the full statement, ‘Tat Tvam Asi’ from the perspective of jnana.

The Gitartha-sangraha of Sri Yamunacharya, which provided the base and framework for the Sri Ramanuja bhashya on the Gita, has a different categorization of the eighteen chapters. The first six are considered to be about the performance of nishkamya (desireless) karma and jnana for the realization of the self.

The middle six chapters deal with Bhakti, which is considered to be brought about by karma and jnana and is for the attainment of the knowledge of Bhagavan as He is. The final six chapters supplement and complete the two preceding sections.

The difference in emphasis and interpretation reflect the differing darshanas from which both approached the Gita. In reading both with an open mind, we pick up different insights and nuance into the ocean of wisdom that is represented by the Bhagavad Gita.

The more we dedicate ourselves to the Gita through the practices of sadhana and adhyaayana, the more such gems we will discover for ourselves.