All art in ancient India was spiritual in natural and catered to the religious needs of the people. Every motif used, every sculpture carved had a deep spiritual meaning, as all art was seen as a divine creation. This close relationship between art and religion manifested itself into all aspects of artistic creation. Ananda Coomaraswamy has described the nature of Hindu art in the following words,

‘there is no hard line drawn between the secular and the religious things in life; religion is not so much a formula, as a way of looking at things, and so all the work of life…may be done as it were unto the Lord’.

This is the reason why you see the same motifs recurring across art forms, from literature to temple sculptures to folk culture. Nowhere is this fusion of art and spirituality more evident than in the figure of the Kirtimukha or ‘face of glory’ that you find in temple architecture all over India and Asia. 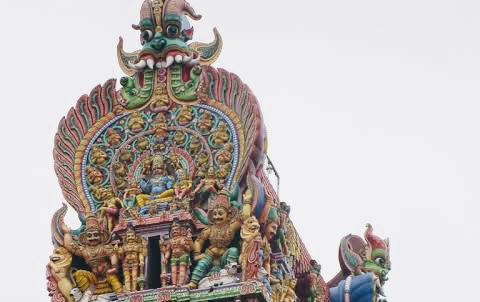 seen in all temples everywhere from the threshold of the garbhgriha to the top of the lofty Gopurams.

The Kirtimukha or ‘Face of Glory’, is a motif that is depicted as a fierce-looking lion face with bulbous eyes, matted hair and a gaping mouth displaying huge fangs. There is a Puranic story behind it. The Kirtimukha is a grotesque creature that is said to have been born out of Bhagwan Shiva’s wrath as per a story from the Skandapurāna .

As per legend, Jalandhara, the powerful king of Asuras sent his emissary, Rahu, to Lord Shiva with a message that Lord Shiva should drop his plan to marry Goddess Parvati, as she was destined to be Jalandhara’s queen. Foolishly, Rahu conveyed the message to Lord Shiva, and called him a mendicant unworthy of Devi Parvati. Infuriated by this insult, Bhagwan Shiva created a terrible creature from the spot between his eyebrows, the Ajna-Chakra. The creature had a terrible countenance, and a face like a grotesque lion. It roared and started pursuing Rahu. Joseph Campbell has described the creature thus in his book, ‘Myths To Live By’

‘The body of the monster was lean and emaciated, symbolising its insatiable hunger, yet its strength was resilient and irresistible. The apparition’s throat roared like thunder; eyes burnt like fire; the mane, dishevelled, spread far and wide into space.’ 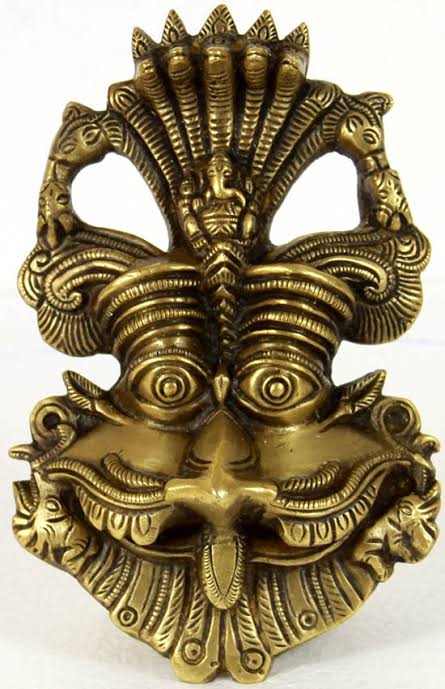 When Rahu saw the terrible creature chase him, he realised his folly and fell at the feet of Lord Shiva, seeking his forgiveness. The compassionate Shiva forgave Rahu. Rahu was saved, but the creature that was born out of Lord Shiva’s wrath was hungry. Unable to control its insatiable hunger, the creature began to devour itself, starting from its feet and arms. Finally, only the face remained.

Impressed by the creature’s ability to endure pain and to sacrifice itself, Lord Shiva addressed the creature as Kirtimukha, and blessed him with the boon that the ‘Face Of Glory’ would be present on the threshold and lintels of all Shiva temples to devour the sins of the devotees who visit the temples. Hence the Kirtimukha began to be carved on the lintel of doorways to Shiva temples and on the threshold of the door leading to the Garbhgriha. 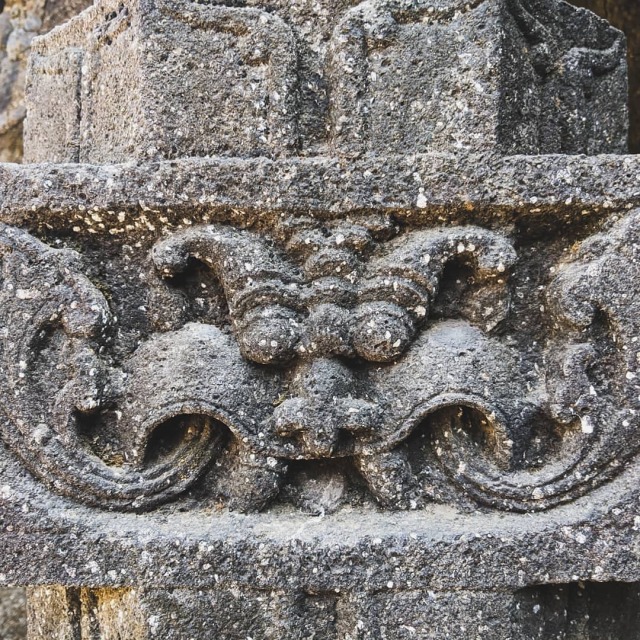 According to Stella Kramrisch, the presence of the Kirtimukha on the threshold of the garbhgriha signifies the transcendental passage of the profane into the profound. It is the threshold where the devotee is supposed to shed his ego, desires and sins for the Kirtimukha to devour them, and enter the garbhgriha as a pure soul focused only on the experience of the Darshana. 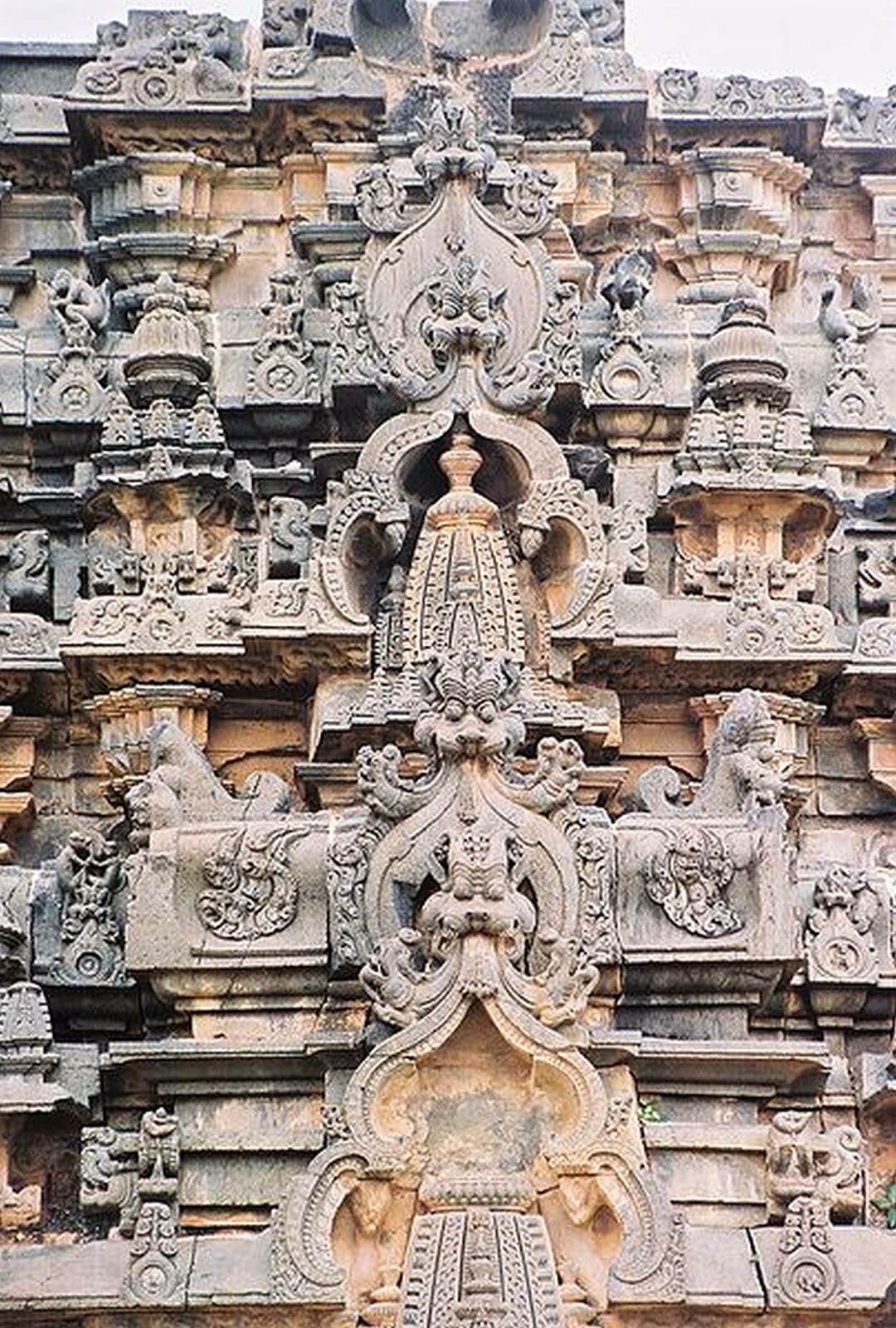 There are many references to the Kirtimukha in Sanskrit literature. According to V.S. Agrawala, the Kirtimukha was believed to be the motif that makes the temple structure stable, and its destruction in any manner would cause the collapse of the whole edifice.  In the PadmaPurana, Prabhu Shri Ram is advised to break the Kirtimukha that crowns Ravana’s palace in Lanka with his bow in order to bring down the whole edifice. 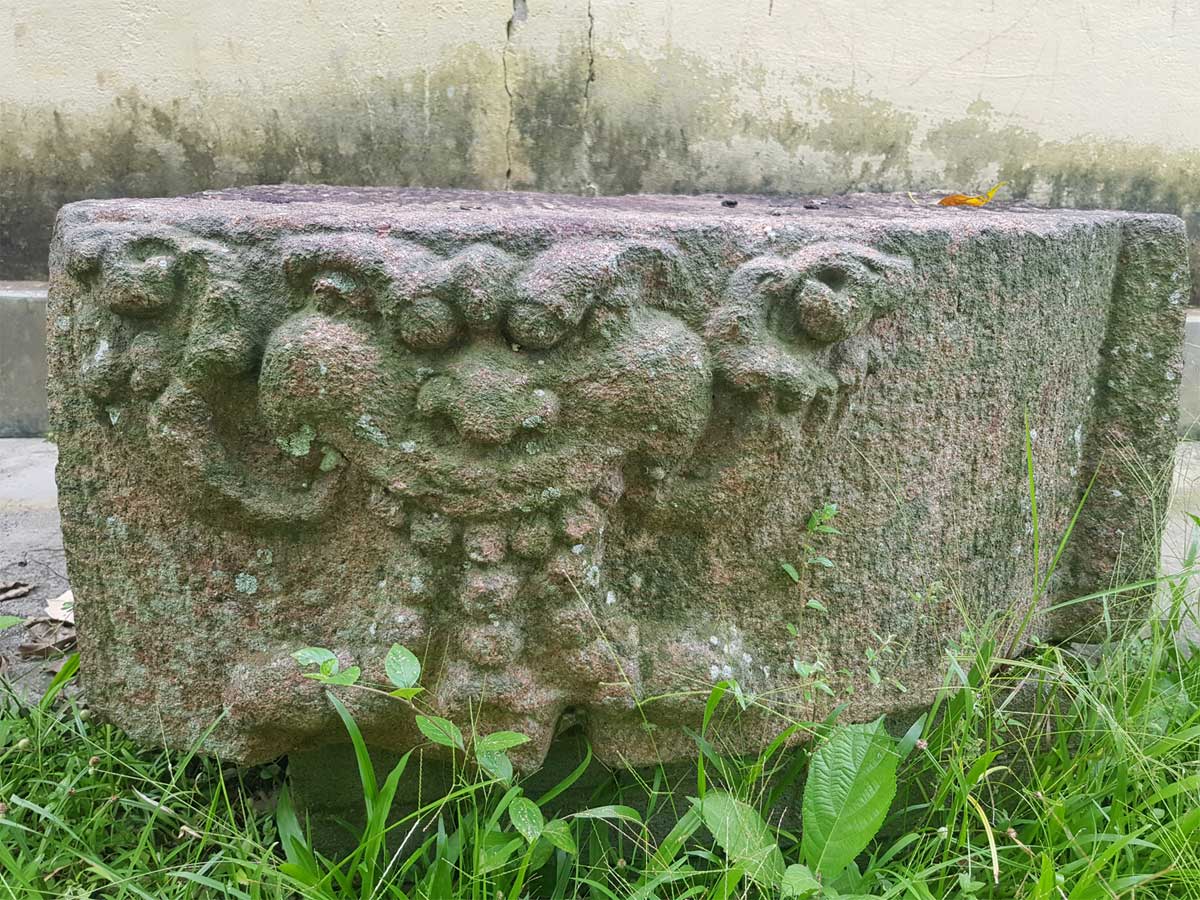 Initially meant to adorn the threshold and lintel of temples dedicated to Lord Shiva, the Kirtimukha soon became a popular decorative motif in temples dedicated to all deities. The kīrtimukha is depicted as a fierce lion like face with stylised horns, a gaping mouth with protruding fangs, frowning eyebrows, bulbous eyes, matted hair flowing in all directions and fan-shaped ears. 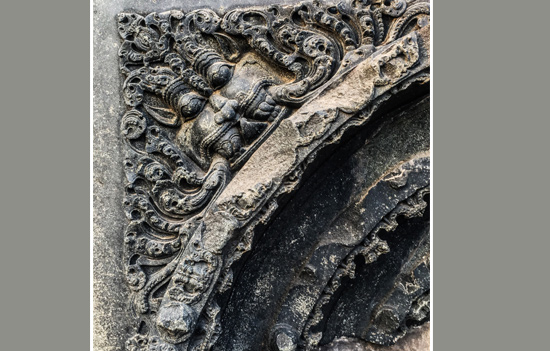 In śilpaśāstra texts like the Mānāsara, the Kirtimukha is described as a protective motif that can be carved on all parts of the temple like the pillars, the Shuknasi and the layers of the jagati.  Sometimes, the Kirtimukha is associated with the makara (crocodile) motif, especially in South-East Asia and Odisha.

The Kirtimukha is also known as Kalamukha, as it symbolises time that devours everything. According to O. C. Ganguly, in iconography, the Kirtimukha began to appear first in Siva’s jatamukuta or crown of matted hair as a protective motif. By sixth century CE, the motif became so popular for its perceived power to bestow protection and ward off evil-eye that it began to be 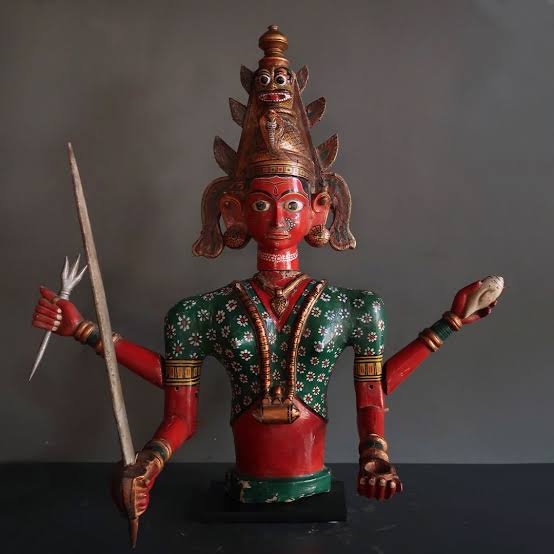 carved on the top of the aureole or prabhavali of sculptures of all deities. 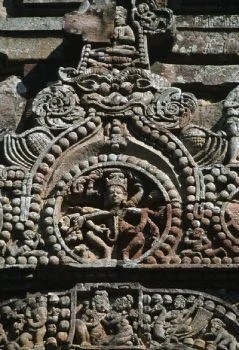 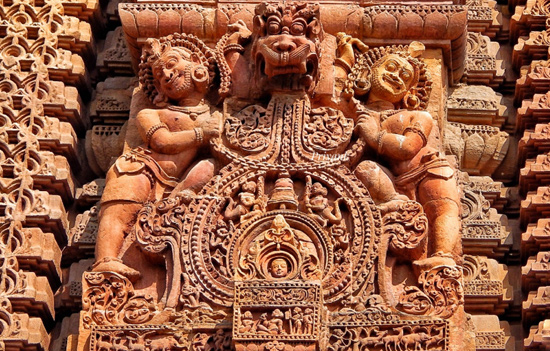 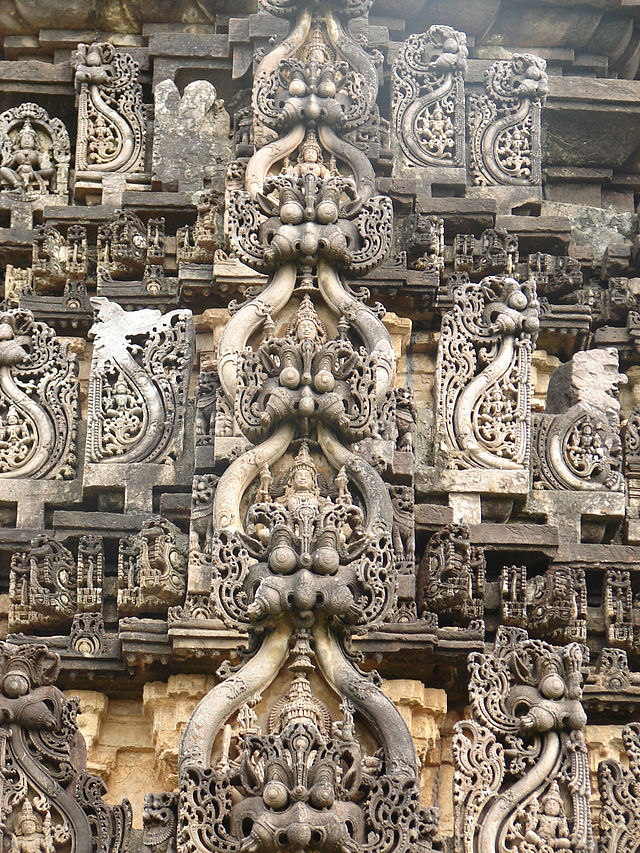 In the Maru Gurjara architectural style found in Gujarat and Rajasthan, this motif is called Grasamukha while it is called as Rahu-Mukha in Bengal. The motif is known as Kalamukha or Bhoma in South-East Asia. It is also known as Simhamukha. 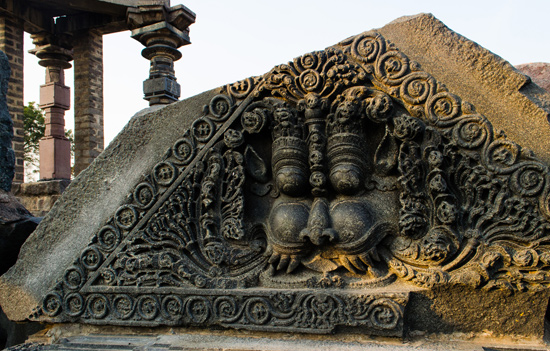 The Kirtimukha travelled to South-East Asia from India, and is seen on temples built in Thailand, Indonesia, Cambodia as well as in Sri Lanka. In Cambodia, the Kirtimukha motif is commonly used as a decorative element adorning the lintels of the doorways. 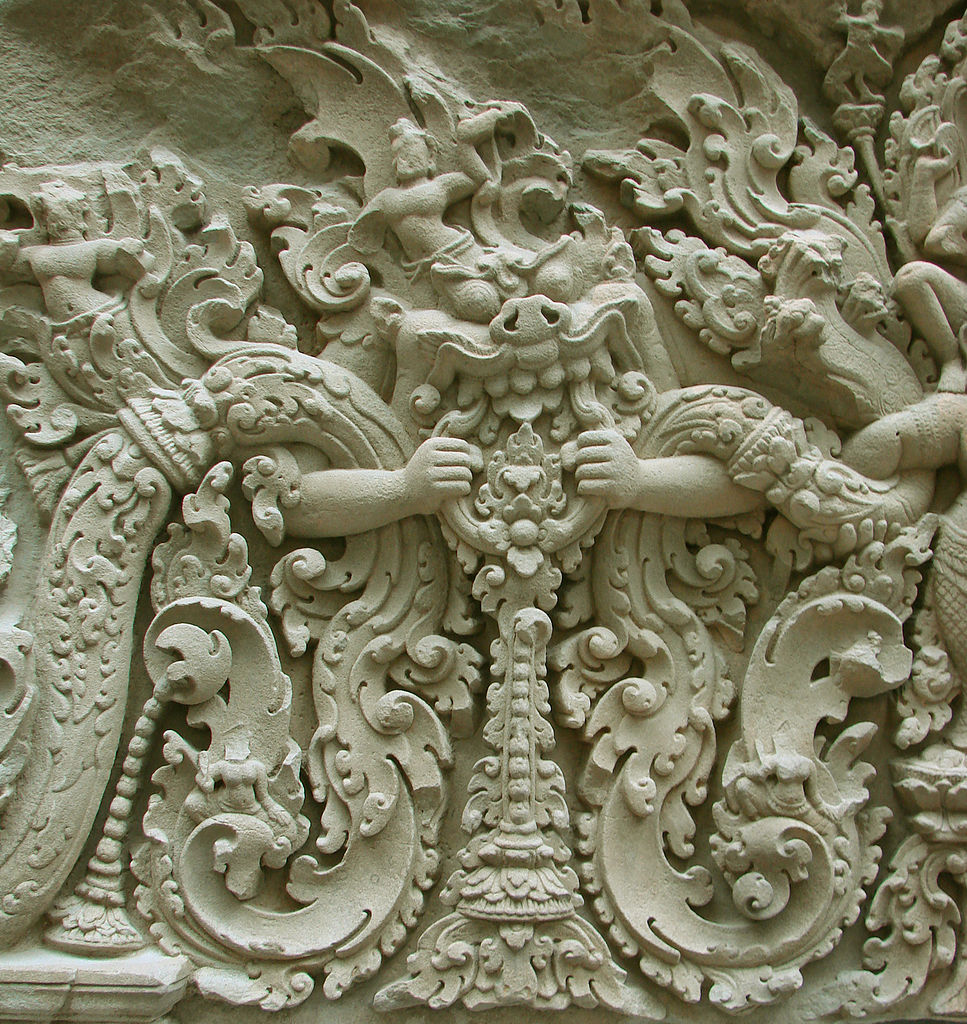 In Indonesia, the Kirtimukha is called Kala or sometimes Banaspati. It is often depicted with the Makara motif sprouting from it and is known as Kalamakara Torana. In Borobodur, the gate to the main stairs is adorned with a giant makaratorana. In Bali, the motif is called Bhoma and is perceived as the guardian deity warding off evil. 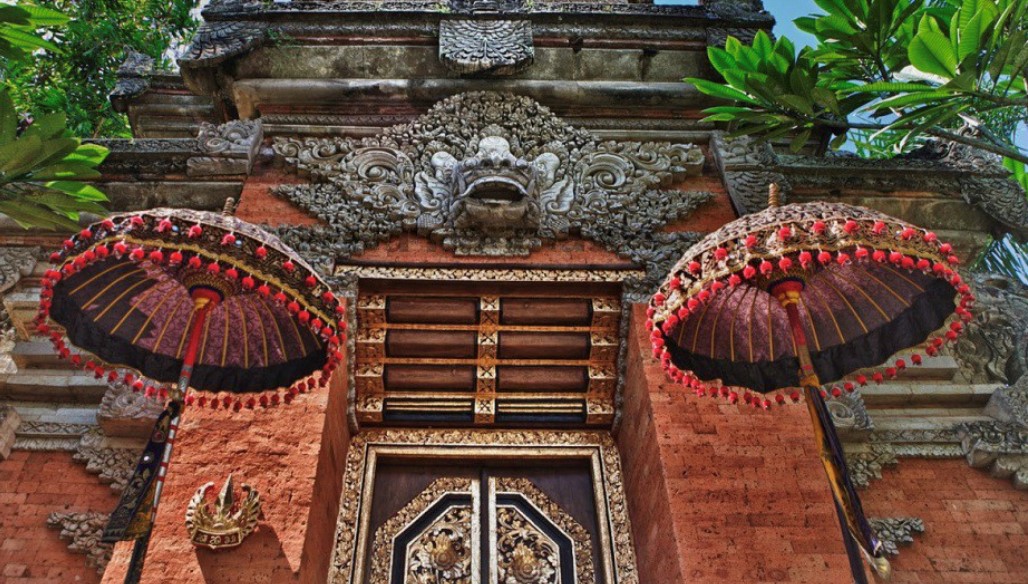 Kirtimukha in Indian Art and Crafts

Because of its perceived powers as a guardian deity that wards off evil, the Kirtimukha is a very popular motif in jewellery as well as in paintings of a religious character like the pattachitra of Odisha and the Thangka scroll paintings of Tibet, Sikkim and Ladakh. 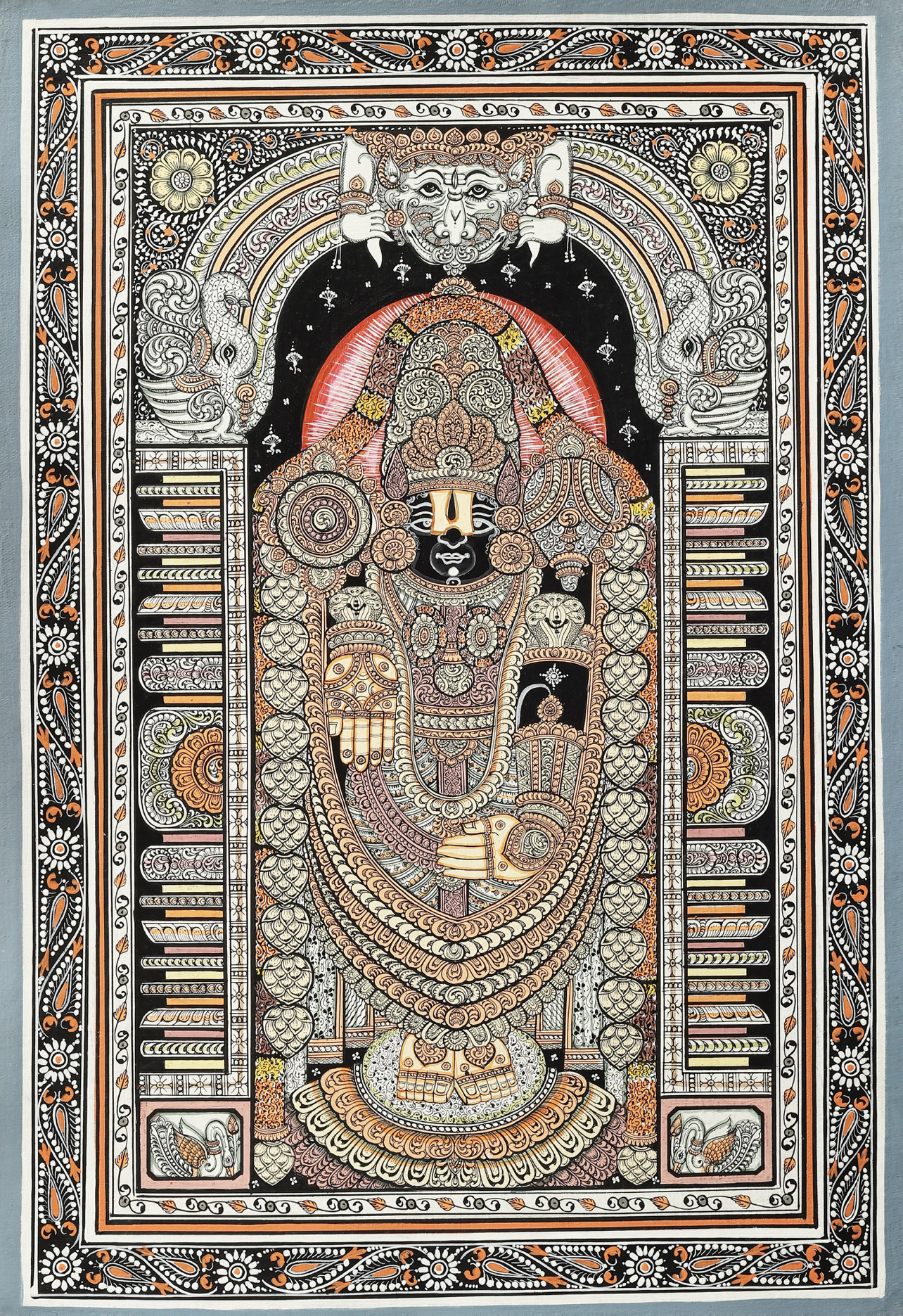 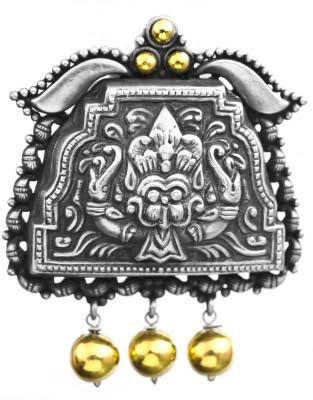 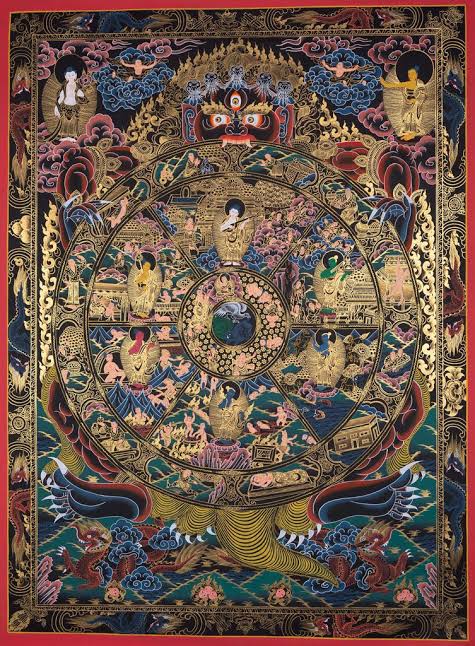 In recent years, the Kirtimukha has proved to be a very popular motif in body tattoos as it is believed that the Kirtimukha tattoo will protect the person from any harm and keep him/her safe and healthy. Kirtimukha motif has also been used in Kosa sarees woven in Chattisgarh state. 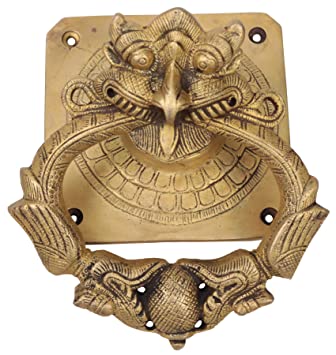 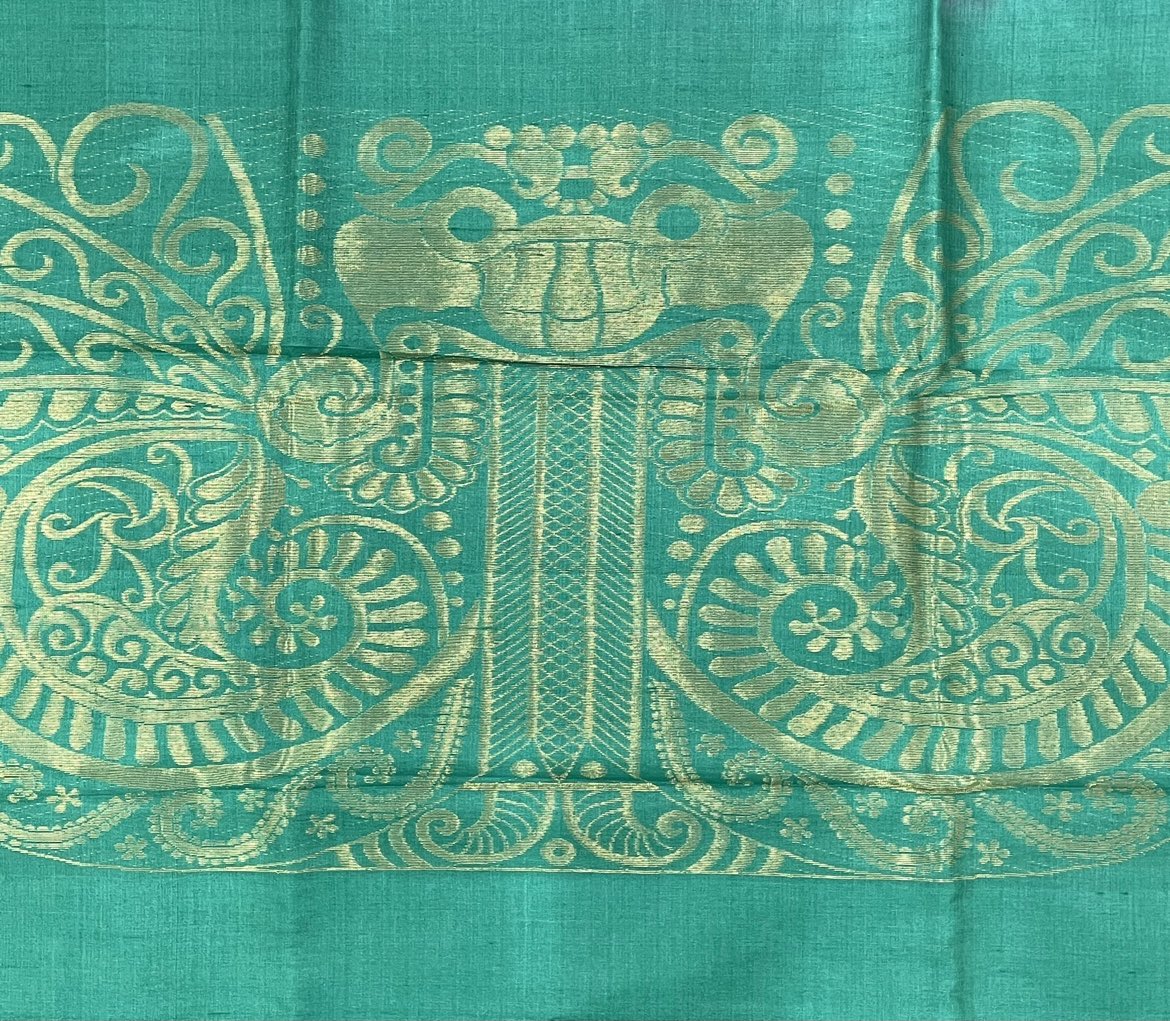 Symbolic Meaning Of The Kirtimukha 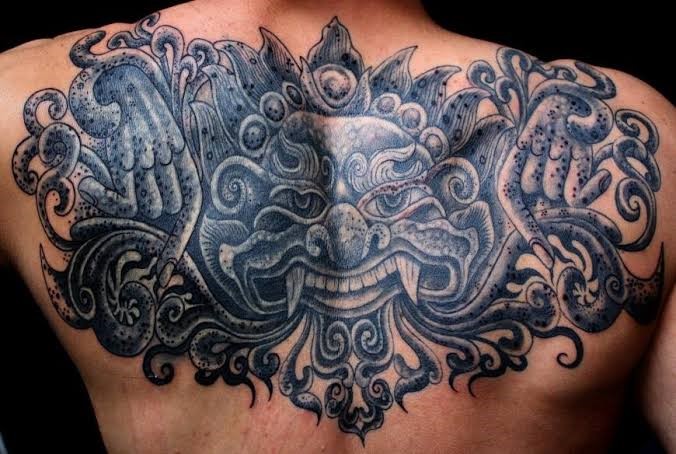 Why is the Kirtimukha motif so popular in temple architecture? It is meant to be a visual representation of our thoughtless pursuit of pleasures, that some day will devour us.

The Kirtimukha is the ‘face of glory’. Glory is an attribute of the ego, as it is the ego that constantly craves glory. It serves as a reminder that our ego sustains itself by consuming our mental peace. Hence, when we enter a temple, we are supposed to shed our ego at the threshold and enter with humility. 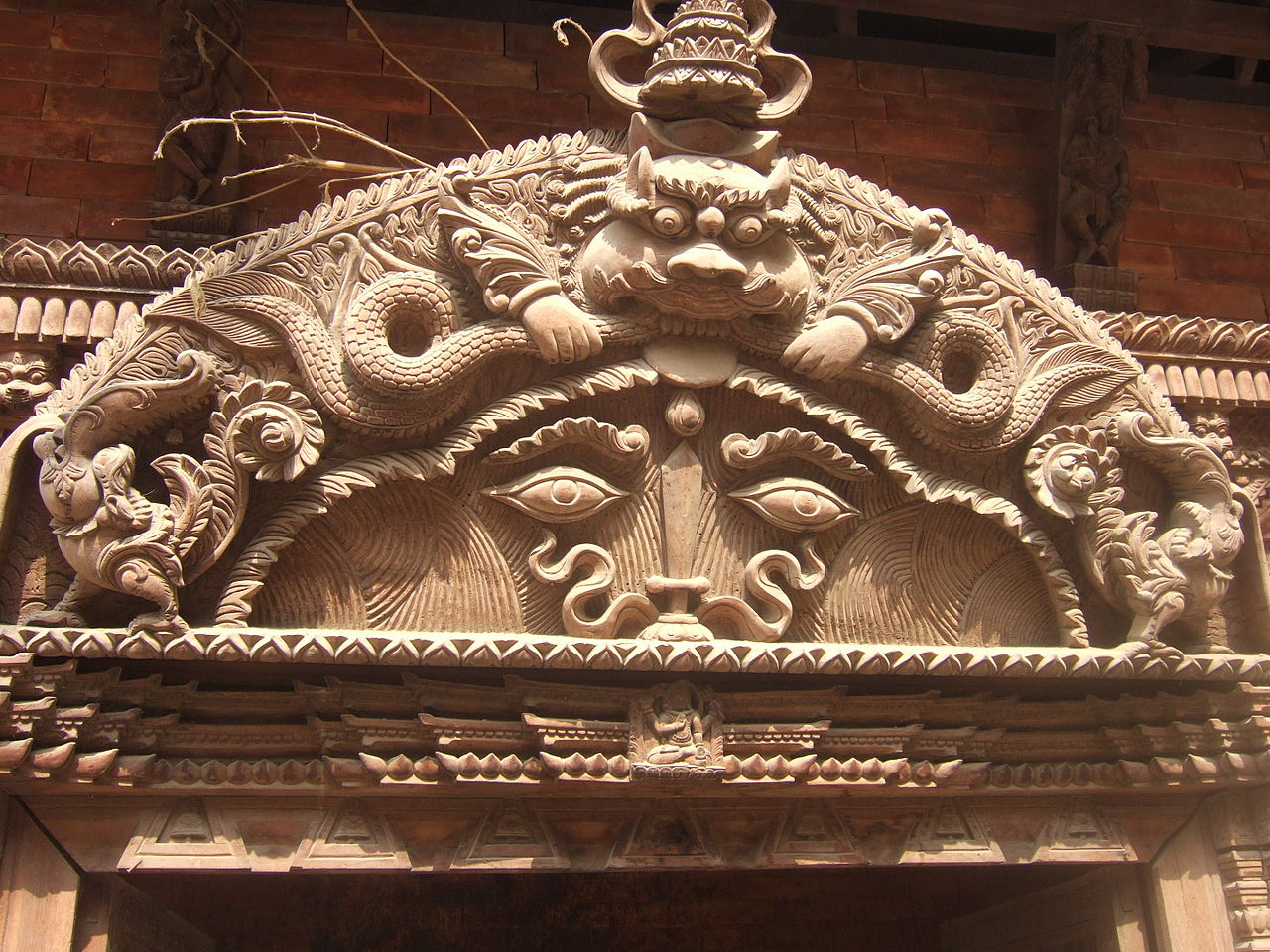 Campbell, Joseph – Myths to Live By

Thomas, Donaldson – Development of the Vajra-Mastaka on Orissan Temples

Kalpavriksha, Kirtimukha – The Face Of Glory