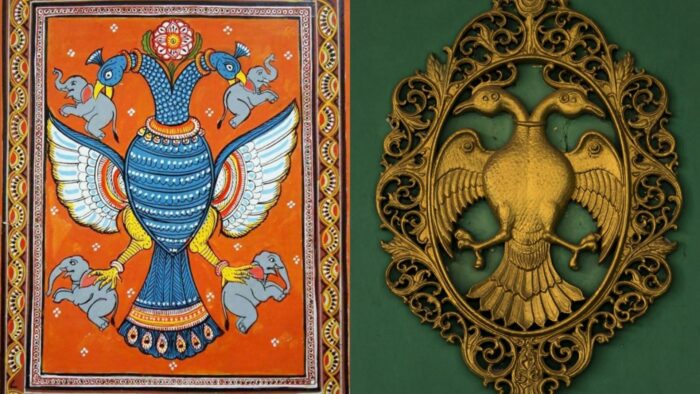 All Indian Art forms are essentially symbolic in nature. Motifs inspired by religious scriptures and beliefs play an important role in the design vocabulary of Indian art, as all art forms possess a spiritual element as per the Hindu view of aesthetics.

Motifs based on flora and fauna such as the lotus, the goose, the elephant, the lion, the peacock, the parrot and the eagle feature abundantly in Indian art, not just because they occur in nature, but also because they are symbols strongly associated with Hindu, Jain and Buddhist scriptural legends.

Mythical composite animals like the Vyala, and the Makara also feature in all forms of Indian art and crafts, including sculpture, paintings, weaving and jewellery making.

Today, we talk about a mythical bird called gaṇḍabheruṇḍa in Sanskrit that has held a special place in the world of Indian motifs for centuries. In Sanskrit, the word bheruṇḍa means ‘terrible to behold.’

The gandabherunda is a two-headed eagle, often depicted in Indian art as a terrifying figure clutching elephants by its talons. The concept of a two-headed mighty bird existed among Hittites, Egyptians and Sumerians as well as Indians. Probably the idea of a mighty celestial bird, with more than one head watching in all directions is a metaphor that appealed to all cultures.

According to British archeologist John Marshall, this motif of the double-headed eagle was brought to India by the Shakas. In his book ‘Taxila: An Illustrated Account of Archaeological Excavations’, John Marshal states that:

“The presence of the ‘double-headed eagle’ motif on this stupa at Taxila is interesting, supplying another link in a long chain of its migrations….. It was the Sakas (Scythians) who introduced the symbol to Taxila. From the Sakas, it found its way southward, through India to Vijayanagara and Ceylon.“

However, there is a mention of a two-headed eagle named Bherunda in the Panchatantra stories. The surviving copy of the Panchatantra is dated to roughly 200 BCE – 300 CE.  Based on a much older oral tradition, the Bherunda bird is also mentioned in the Mahabharata and as Prof. Subhash Kak has pointed out in a paper, Panini’s grammar written in 400 BCE mentions the Mahabharata. The KalpaSūtra, a Jain text traditionally ascribed to Bhadrabahu and dated to 4th century BCE mentions that the 24th Tirthankara Mahāvira was always watchful in all directions like bird Bherunda. Thus, it is possible that ancient Indians knew about the two-headed eagle as a symbol much before the Scythians arrived in India.

In the Indian subcontinent, gandabherunda motif is first seen carved at the base of a Stupa in Sirkap, near Taxila in present day Afghanistan as an artistic representation. It is depicted as an eagle with two heads, one looking ahead and the other looking behind, a metaphor for the past and the future. A similar motif is also seen at the entrance gateway to the Sanchi Stupa dating to 2nd century BCE. 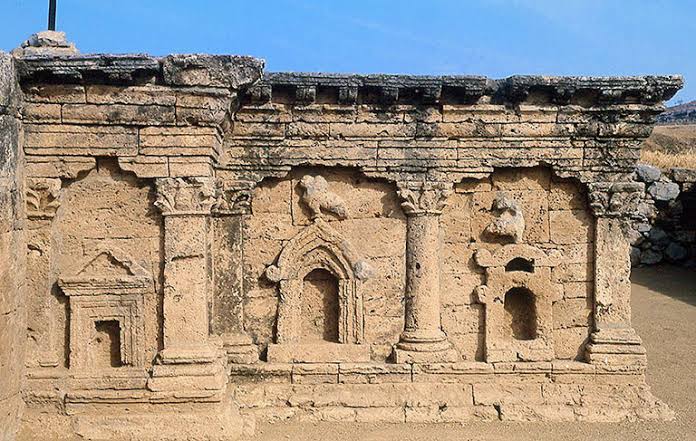 Gandabherunda also finds a mention in Buddhist literature, with a Buddhist fable that mentions a bird with two heads known as Garuḍa and Upagaruḍa. The two heads used to take turns in waking and sleeping. One day when Upagaruḍa was sleeping, Garuḍa ate a delicious flower. When Upgaruda woke up, he got so angry that he ate a poisonous flower and the bird died. The same story is told in the Panchatantra as a lesson in unity. In Panchatantra, the bird is named Bherunda.

It is noteworthy that it is in Hindu temple sculptures of Karnataka that the gandabherunda attains its full artistic representation as a terrifying mythical creature with great strength and power. According to the Narasimha Purana, the gandabherunda is said to be a terrible form of Shri Vishnu, When Shri Vishnu took the form of Narasimha to kill Hiranyakashyipu, so terrible was his wrath that his simmering anger continued to scorch the universe even after Hiranyakashyipu’s death. In order to pacify him, Gods asked Lord Shiva to intervene. Lord Shiva manifested himself in the form of another terrifying creature, Sharabha (an elephant headed lion) to calm Shri Narasimha down. However, Lord Shiva himself lost his cool as the terrible Sharabha, and Shri Vishnu had to assume the form of gandabherunda, the mighty eagle with two heads to calm Sharabha down.

The oldest sculptural representation of gandabherunda in Hindu temple art was seen at the village of Balligave, in Shimoga District in Karnataka. Installed on a victory pillar, at the Jagadekamalleśvara temple, the larger-than-life figure of gandabherunda was shown in a human form with two heads of an eagle with sharp beaks, looking in opposite directions. The original image was dated to the first half of 11th century CE. It was installed by Chavundarayarasa, a general of the Chalukya emperor Trailokyamalla, to commemorate a battle victory. However, after the image fell and broke and a replica was made by a traditional Sthapathi from Mysuru in 1937. 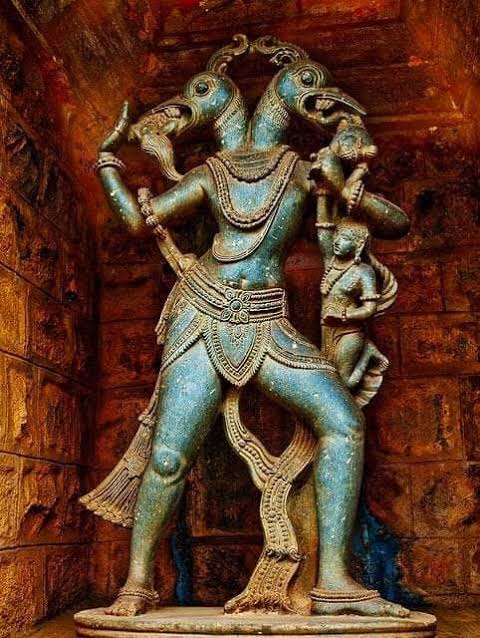 From 11th century onwards, the gandabherunda became extremely popular in South India as a symbol of royal strength and power. Many kings from different dynasties like the Chalukyas, the Kadambas, the Kakatiyas of Andhra, the Hoysalas of Karnataka and their successors, the Vijayanagara kings, adopted gandabherunda, both as a royal emblem as well as a title.

In the Hoysala royal temple of Belur built in the 12th century CE, gandabherunda is depicted at the top of a “chain of destruction”, wherein a deer is being swallowed by a python, the python is being lifted by an elephant who is being attacked by a lion who is being devoured by Sharabha. The last scene depicted is of gandabherunda attacking Sharabha. Indologist, Dr. K.L. Kamat, has referred to this sculpture as an ancient concept of the ‘food chain’ as seen in nature.

The gandabherunda motif also appears on the roof of the Rameshwara temple at Keladi in Shimoga District built by the Keladi Nayaks in the 16th century CE. This sculpture is unique in the sense that gandabherunda is depicted as a terrifying figure clutching two elephants in its talons and lions in its two beaks. 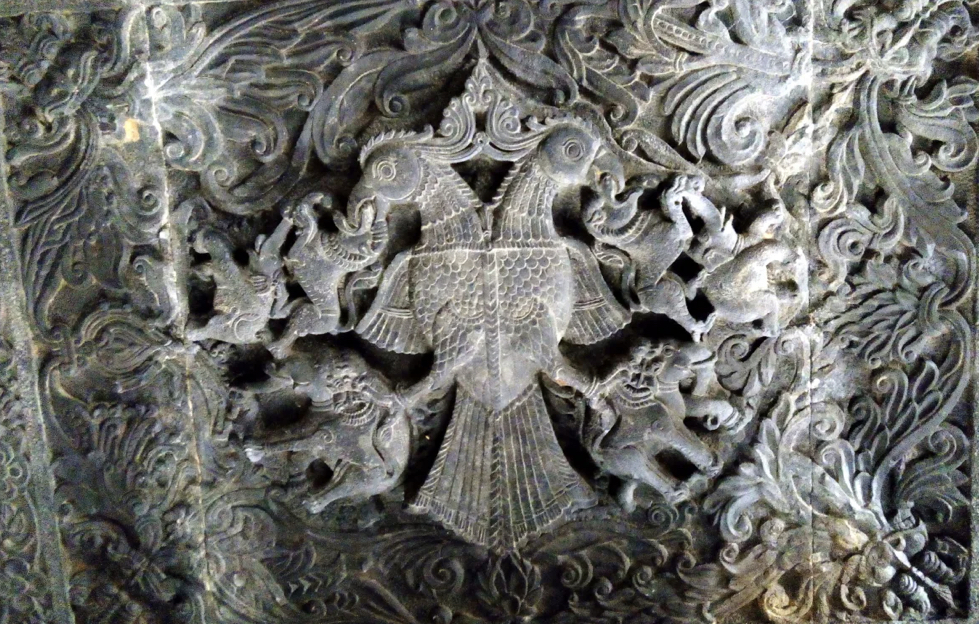 The four elephants were supposed to represent the four Islamic sultanates of the region – Bidar, Bijapur, Ahmadnagar and Golconda and the Hindu Vijayanagara kingdom 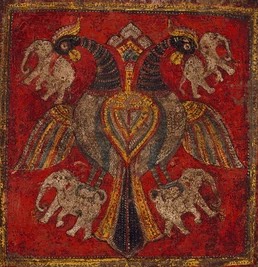 was meant to be the mighty gandabherunda. Sadly, finally, it was the elephants that got together to destroy the mighty bird!

After the fall of the Vijayanagar Empire, the Nayakas of Madurai and Keladi as well as the Wodeyars of Mysuru continued to use the gandabherunda motif. The Mysuru royal family changed the motif slightly, to turn it into a royal crest. 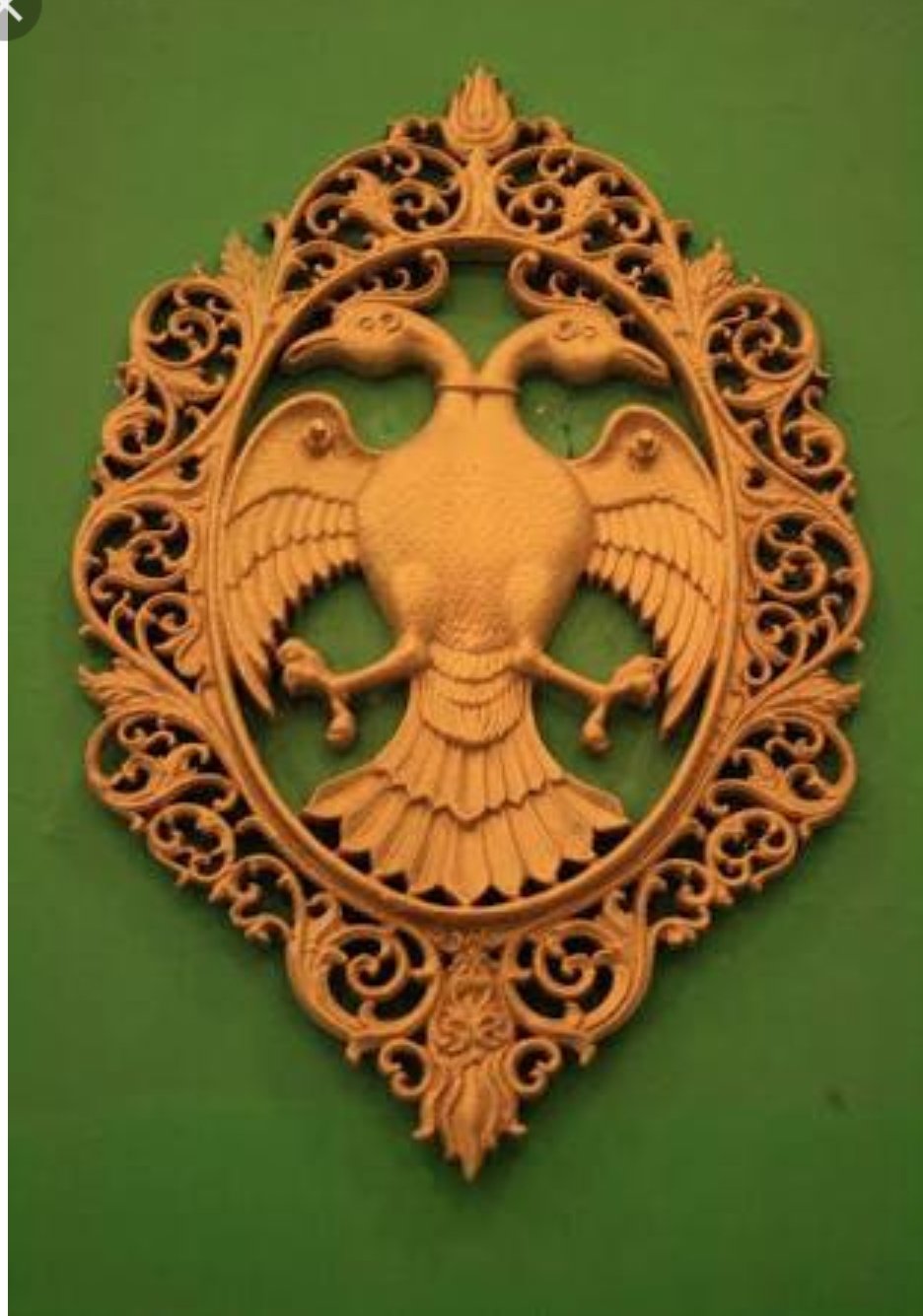 Gandabherunda in Art and Crafts:

The gandabherunda motif was adapted by other forms of Indian arts and crafts due to its religious symbolism and association with Shri Vishnu. The Pattachitra painters of Odisha used it widely on Pattachitras as well as on ganjifa playing cards. 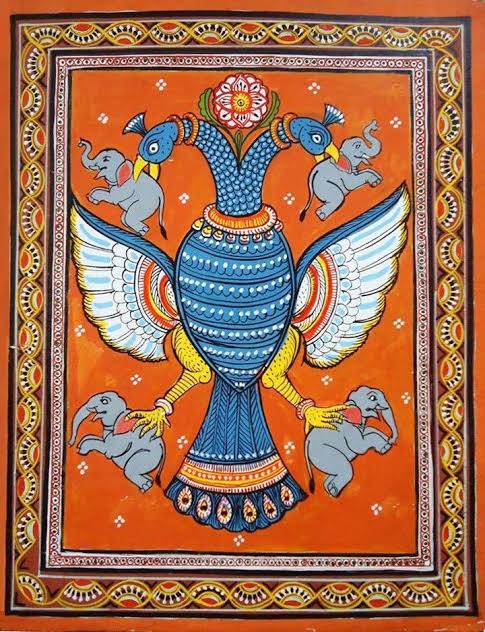 The motif was also used by the weavers of Kanchipuram as a powerful auspicious motif meant to act as a protective charm for the wearer of the garment. They called it the ‘Iruthalai Pakshi.’ 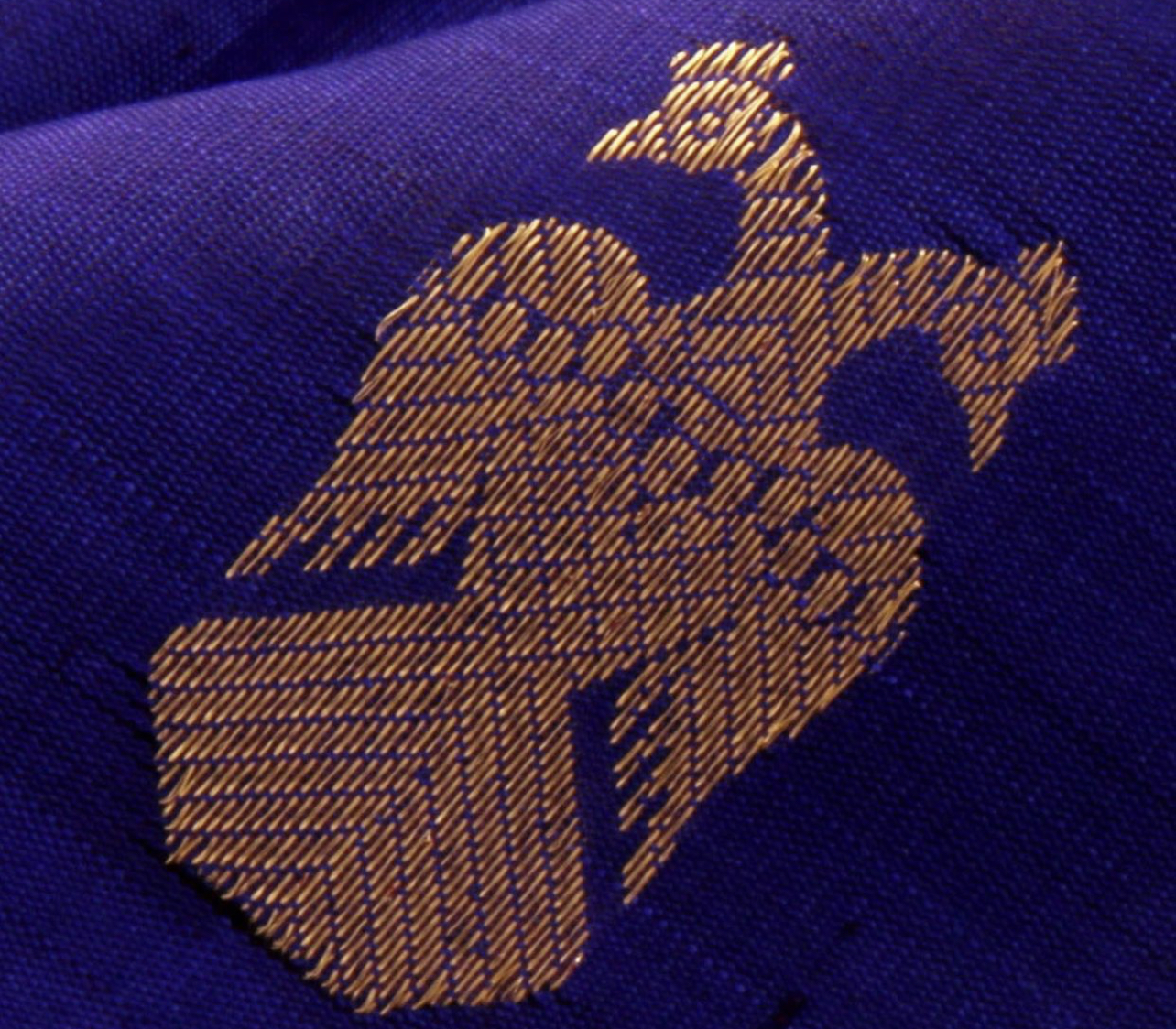 The gandabherunda was also adopted by the Ikat weavers of Odisha. Traditional temple jewellery of both Karnataka and Tamil Nadu also uses the gandabherunda motif extensively as it is considered to be both auspicious and powerful. 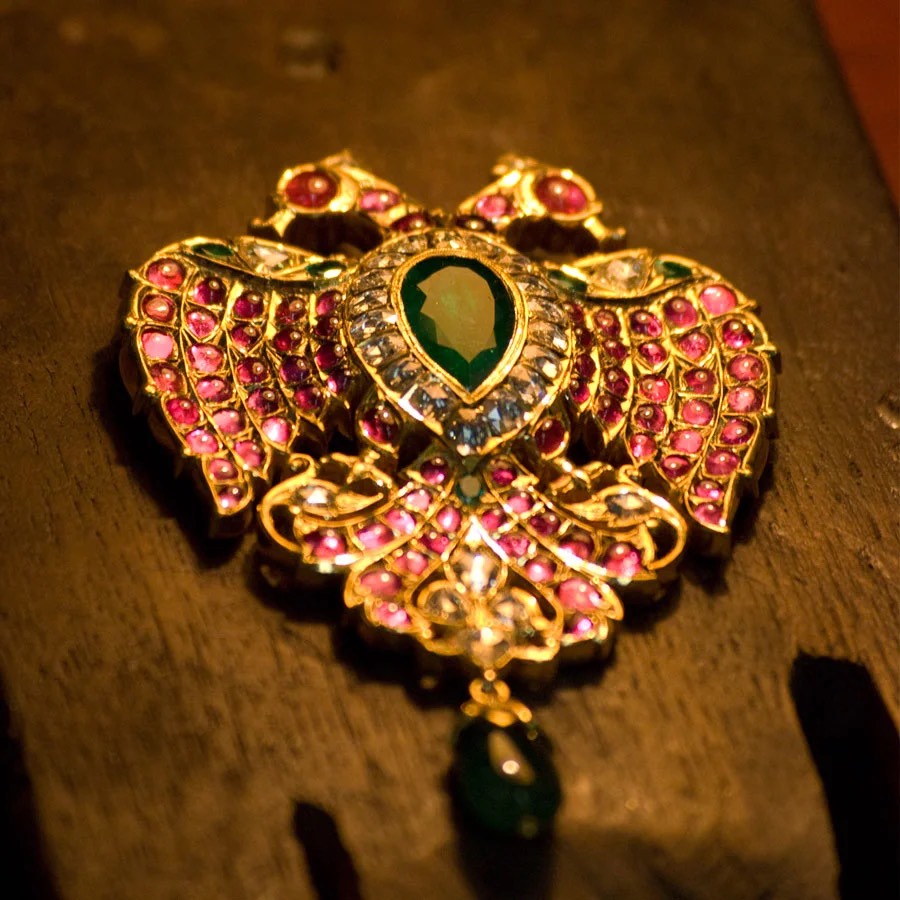 After independence, the Karnataka Government adopted the gandabherunda as the state symbol. It can be found on bus terminals and tickets issued by Karnataka State Road Transport Corporation buses as well. 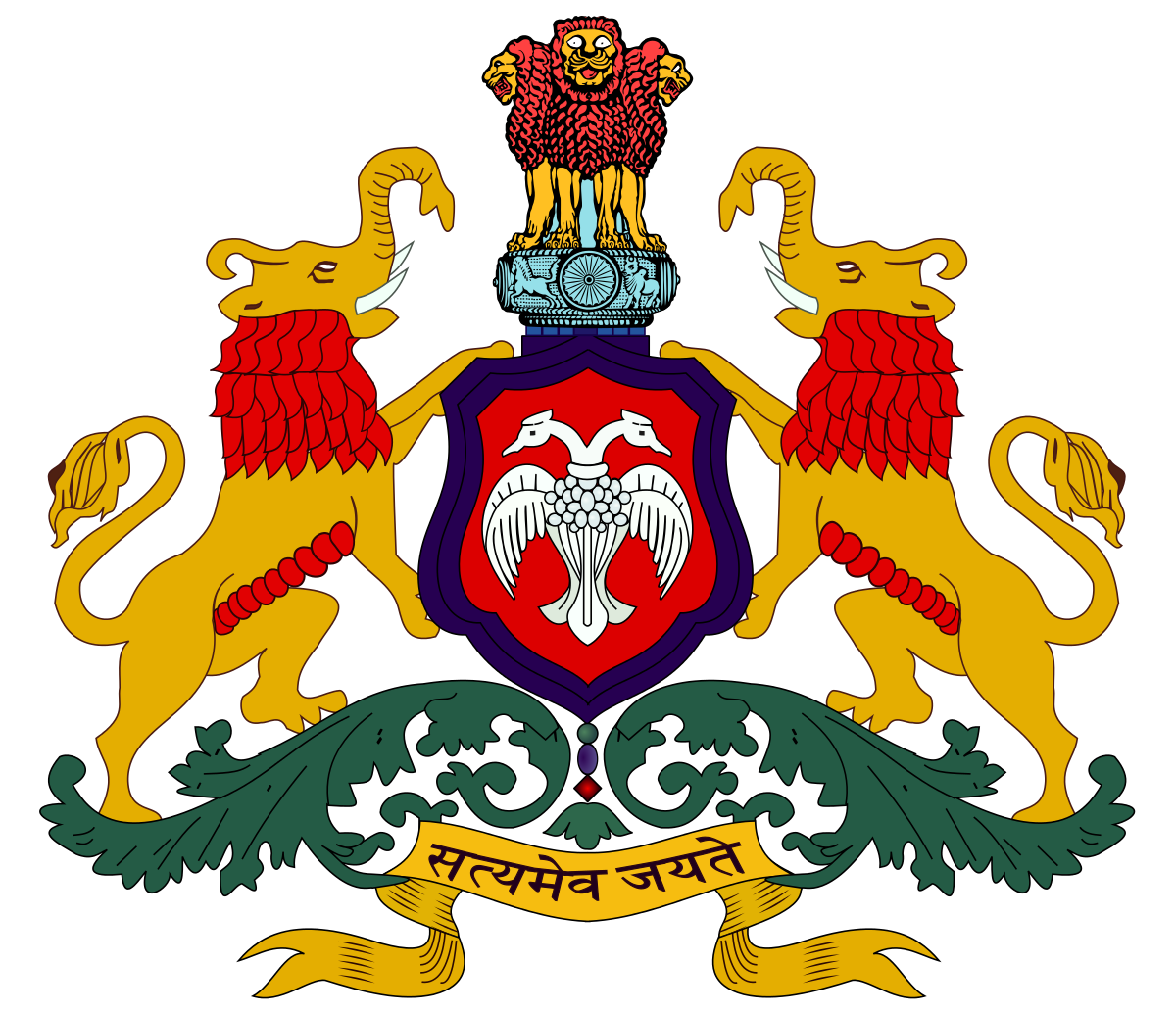 The gandabherunda was so revered by the Mysuru royal family that they instituted an Order of Gandabherunda, which was conferred upon meritorious people from the erstwhile Mysuru state between 1892 to 1950. The award consisted of a chain with a gandabherunda pendant.

Gaṇḍabheruṇḍa is also seen as a motif in the leather Puppetry of Karnataka. In recent years, it has been used as the logo of the Bengaluru Film Festival as well. From temple sculptures to pop culture, the gandabherunda is a motif that has influenced Indian Art profoundly for more than two millennia! 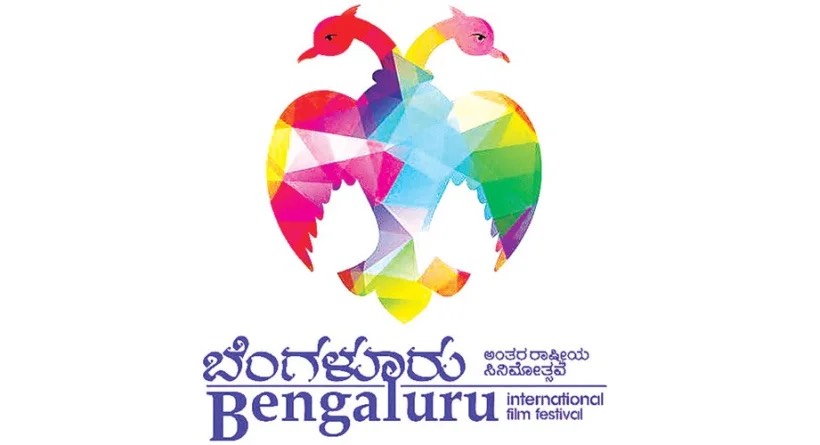