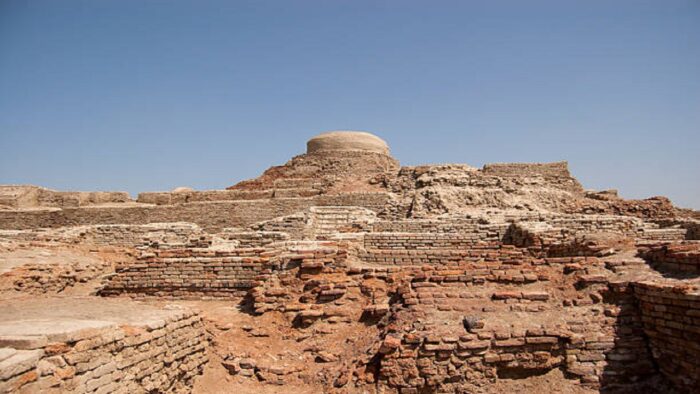 On Dec 30 2021, The Quint published IIT’s ‘Aryan Invasion’ Calendar: Right-Wing’s Beliefs Are Far From Science which is attributed to Tony Joseph. The article contains 27 sentences (in blue below). Below the enumerated sentences are responses to some of them. Emphasis (bold) has been added in some sentences and non-contiguous sentences are at times grouped together while responding in the interest of brevity.

Let’s start with this “handy strawman” business. Is it just us or do some others also see the rich irony that in the very statements (1-3) where allegations of raking up a strawman are being posited, Joseph has set up his own strawman: “right-wing,” “polemicists,” and “right-wing polemicists.” Can Joseph care to be more specific who these (so-called) “right-wing polemicists” are?  On what basis does he use this label?

Let us indulge Joseph a bit though. According to Joseph, it is only in the imagination of these “right-wing polemicists” that the ‘Aryan Invasion Theory’ has stayed alive in the last about 50 years or so. Now consider the following entries from the publicly-accessible Oxford reference: 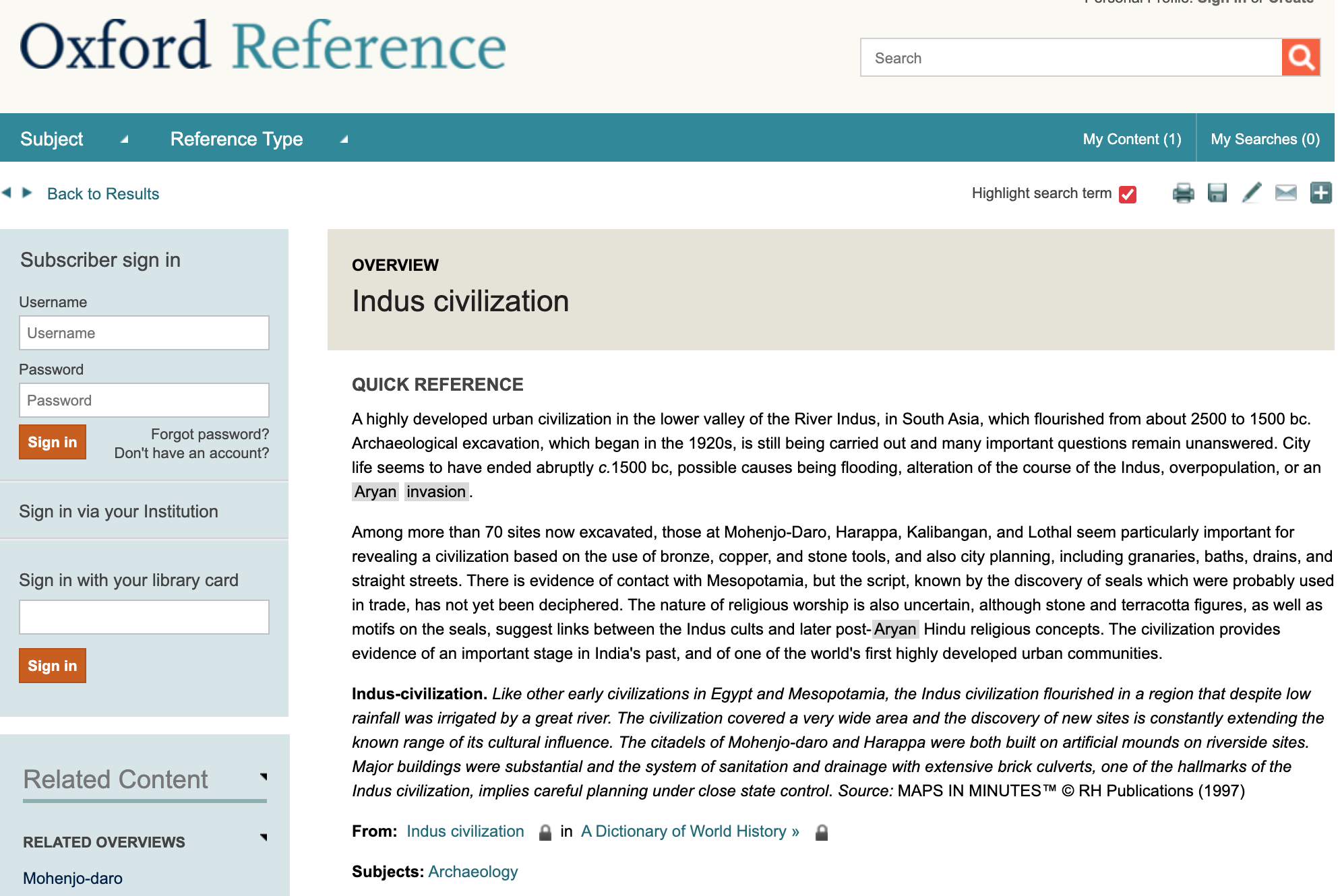 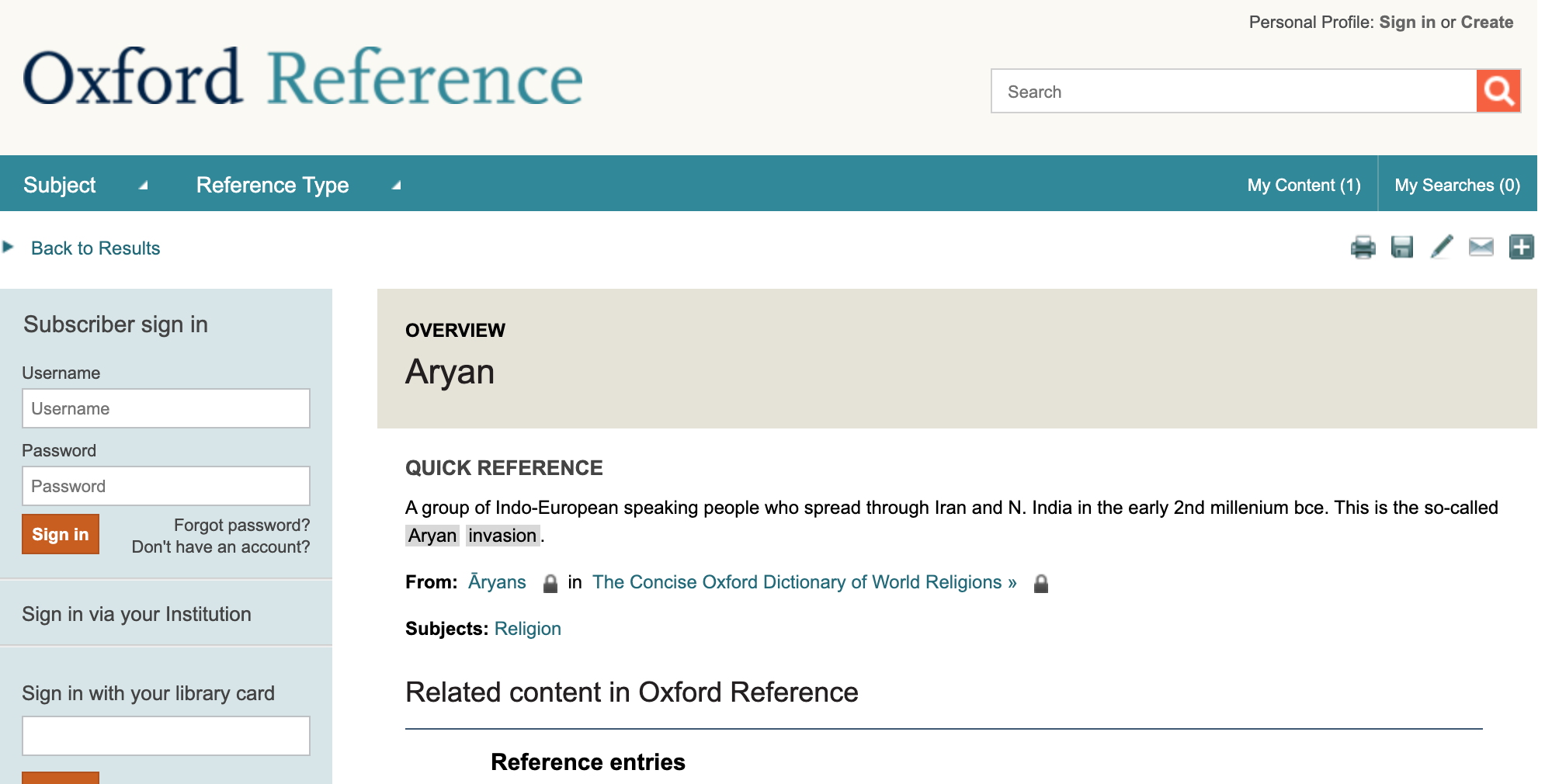 A couple more from many other examples that can be invoked: here is the entry for Āryan in the 2005 edition of Wendy Doniger’s The Rig Veda (first published in 1981):

Does Joseph imply that Doniger is a “right-wing polemicist”? Also, as was pointed out in slide 4 of the presentation The A of ABC of Indian chronology*: Dimensions of the Aryan problem revisited in 2017, Doniger’s book was part of the reference texts of McMaster University’s Anthropology course in as late as 2017. Is Joseph implying that this is also a handiwork of right-wing polemicists? 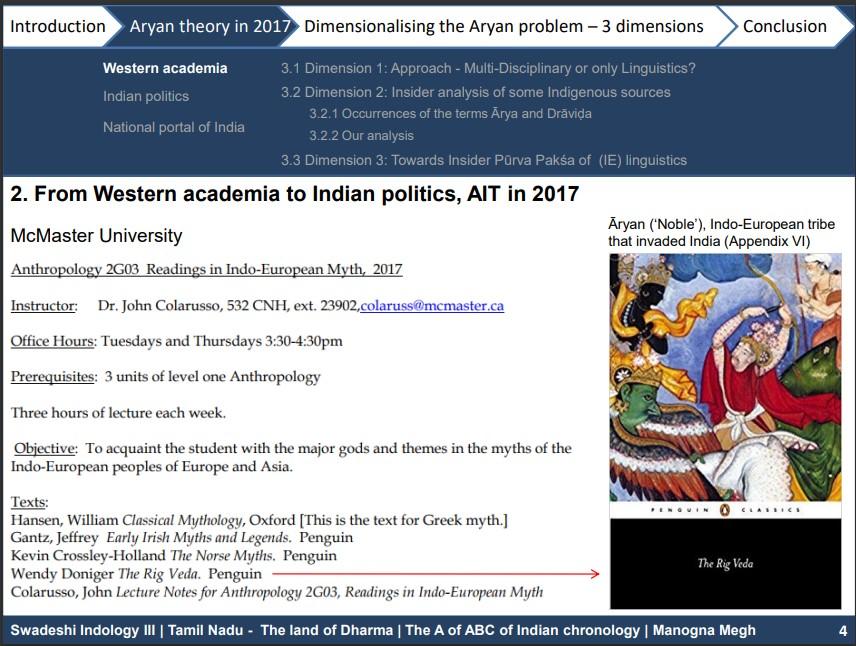 Closer home, in India, consider the presence of “invasions by the Aryans” in this knowindia.gov.in  link from the archive (snapshot date Dec 14 2012) https://web.archive.org/web/20121214015229/http://knowindia.gov.in/knowindia/culture_heritage.php?id=2: 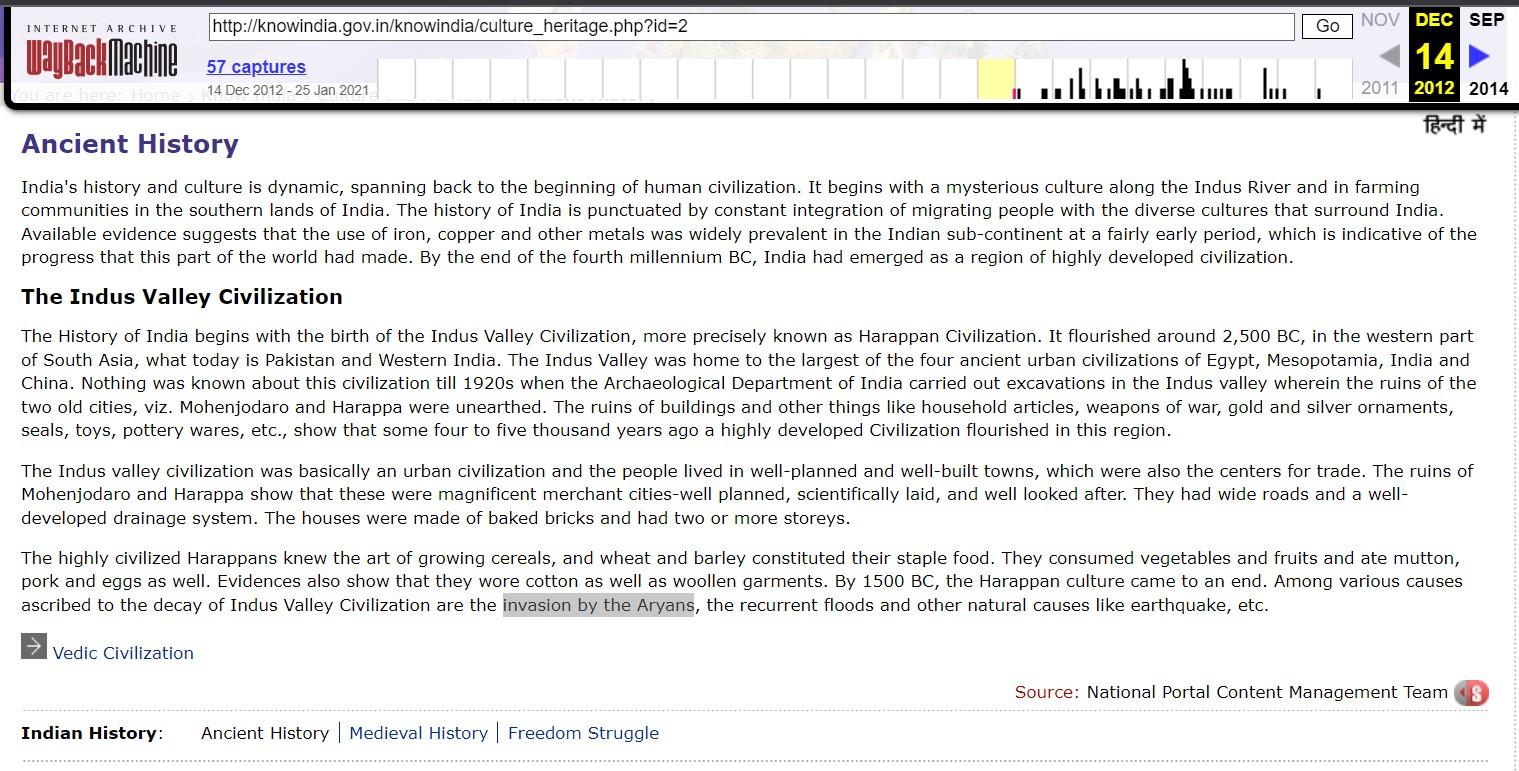 Does Joseph imply that this content, from 2012, is also the handiwork of “right-wing polemicists?” All the evidence invoked thus far should make it clear that Joseph is factually incorrect when he writes that the “…only place where the ‘Aryan Invasion Theory’ has existed for about half a century is in the imagination of polemicists.”

Now, in statement 17 above, he charges the so-called right-wing polemicists with another charge: that they assume that Indian civilization is synonymous with the Arya/Vedic/Sanskrit culture. On account of this charge at least, we should be spared this label (a label which we reject even otherwise for its inaccuracy!), given our position expressed (see first point image below) in slide 5 of Aryan problem from the perspective of Textual Evidence and Linguistics (Aug 02, 2019):

What Joseph also fails to mention or acknowledge is how the invasion scenarios have been conveniently replaced with words which imply the equivalent consequences but leave room for convenient ways to explain away the issues. For instance, in Michael Witzel’s (the Harvard Sanskritist’s) work, one finds, within Joseph’s chosen time range of the past half a century,  “…we may regard the “importation” of Indo-Aryan into the Sub-continent as the outcome of the influx of a group of clans, tribes or people who spoke early Vedic and had an Indo-Iranian, or rather Indo-Aryan, civilisation with exogamous groups of patrilineal descent, practised pastoralism and fought with horse-drawn chariots…The first appearance of thundering chariots must have stricken the local population with a terror similar to that experienced by the Aztecs and Incas upon the arrival of the iron-clad, horse-riding Spaniards.” While one can subscribe to different narratives of the Spanish conquest of the Aztec empire, each of them agrees that the scenario is that of an invasion. What Witzel, similar to Joseph, does is introduce all elements and consequences of the invasion model, including an actual comparison to an invasion, as seen in the reference to the Spanish conquest of the Incas and Aztecs, while using all other words the thesaurus gives them in the place of invasion and then conveniently accusing “polemicists” of holding onto the word. Indeed, migration has become one such convenient word. As Joseph points out in the statements 22 and 23 above, mass migrations of the human population have been a reality of mankind’s history. While his statements sound innocuous and commonsensical, in the AI/MT debate, they cleverly lay the groundwork for normalizing migrations of consequence to the matter under consideration, i.e., the kind of “importations” Witzel discusses. 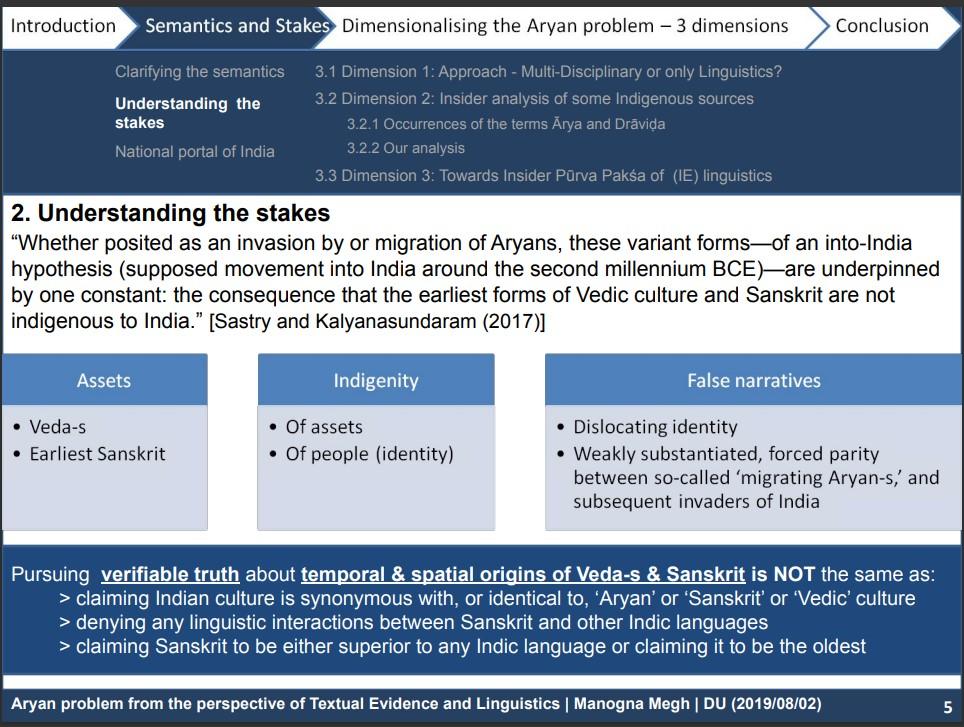 The one statement in Joseph’s article that we agree with in-toto is the 27th: it is, indeed, fascinating the story science tells us! Science, however, is not the handmaiden of circumlocutory tactics and sanitisation efforts at propping discredited theories through verbiage; nor is it limited to historical linguistics (which has many issues that make it difficult to accord it the status of being anywhere close to a precise scientific discipline; see slides 8-12, 24-42 in our 2019 presentation) or attempts to causally connect a haplogroup and a language family (an equation such as R1a1 = PIE; see page 4 in Michel Danino’s Methodological issues in the Indo-European debate (2019)) that appears more like a conjecture than a hard verifiable attested scientific fact. Let us remember here that there is no material evidence, till date, that establishes, beyond reasonable doubt, that there ever was anything like, in reality, what is now called Proto-Indo-European! The discipline of Archaeoastronomy, it could even be argued broadly speaking, is underpinned by a far greater degree of advanced mathematics, computation and repeatable scientific rigor than historical linguistics or conjectural, non-causal attempts to validate linguistic hypotheses with results from archaeogenetics. Since Joseph mentions “high-standing” in line 15, we invite his views on whether or not he thinks Springer has a high enough standing, and if yes, we invite his engagement with the results published by Springer in Descriptive Archaeoastronomy and Ancient Indian Chronology (2020) and Prehistoric River Saraswati, Western India Geological Appraisal and Social Aspects (2017) (amongst others). After he has done that, we also invite his engagement with every argument in Bhagwan Singh’s tome The Vedic Harappans, every argument in R.S Bisht’s 1999 paper Harappans and the Ṛgveda: Points of Convergence and every argument in B.B Lal’s 2015 book The Rigvedic People: Invaders, Immigrants or Indigenous. Until all this (and more) is done, anyone who reaches conclusions as found in lines 20-21, be it Joseph or anyone else, would have to concede that she or he has concluded hastily, without a literature survey that at least aspires to be comprehensive, and without doing justice to the claim of being truly “multi-disciplinary” (see statement 5 of Joseph).

(Editor’s Note: This article was originally published in academia.edu on January 2, 2022 and has been republished here with the authors’ permission. Here is the link to the original article link)