4. The Spiritual Significance Of The Bhagavad Gita 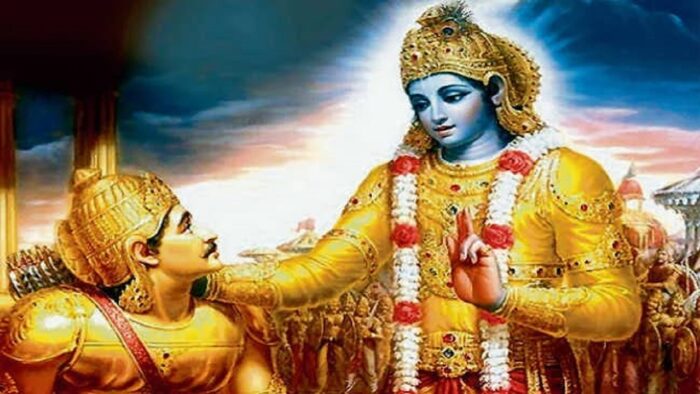 “The Bhagavad-Gita is a true scripture of the human race, a living creation rather than a book, with a new message for every age and a new meaning for every civilization.”   -..Sri Aurobindo

Bhagavad Gita, literally translated as Song of God, is a philosophical poem that focuses on a conversation between Pandava prince Arjun and Lord Krishna at the battlefield of Kurukshetra. Torn by the turmoil of war, Arjun seeks counsel from Madhusudana, who is also his charioteer in the war. Bhagavad Gita, a part of the Bhishma Parva of the epic Mahabharata, is eight-hundred verses long, broken down into eighteen chapters. The Mahabharata itself has around one lakh verses on the Bhuloka or the earth. The rest of the verses are available across other lokas as highlighted by Ved Vyasa in the epic.

The Bhagavad Gita is a timeless text which transcends all barriers of age and space to answer more than just our existential questions – who we truly are and what is the purpose of our time on earth? While we are on the Prithvilok, it helps us put things in perspective and hence stay undeterred and unaffected. The context of the Gita is quite well known.  Arjun, seeing his kith and kin on the battlefield, had started questioning the need to fight a war against one’s own relatives. It is when Lord Krishna delivers the timeless Bhagavad Gita, which continues to inspire and guide humanity, more than 5000 years after the world first heard it – from Sri Krishna himself.

The Bhagavad Gita ascertains that the ultimate goal of human birth is to understand oneself and presents various Margs or routes to attain that goal in the form of Gyana yoga, Karma yoga and Bhakti yoga. That is one of the beauties of the Bhagavad Gita that it does not offer a prescription but presents a framework that can lead us to the supreme truth. The book that begins with Arjun’s dilemma or confusion eventually empowers Arjun to make his own choices.

One of the other reasons Bhagavad Gita continues to be significant in present times is elucidated by Sri Aurobindo in his collection of essays on the Gita. Sri Aurobindo explains that Gita’s content is vital, profound and durable and does not subscribe to a particular philosophy making it universally acceptable. He adds-

“The language of the Gita, the structure of thought, the combination and balancing of ideas belong neither to the temper of a sectarian teacher nor to the spirit of a rigorous analytical dialectics cutting off one angle of the truth to exclude all the others; but rather there is a wide, undulating, encircling movement of ideas which is the manifestation of a vast synthetic mind.”

In the Bhagavad Gita, Krishna begins by explaining to Arjun, the immortal nature of the soul. Krishna describes that the eternal individual soul or Jivatma is neither born nor dies. Death only destroys the physical body, but the Atma continues its journey. The Gita illustrates this with an equally beautiful example in verse 2.22

Sri Krishna explains to Arjun that as we discard our old clothes and trade them for new ones, similarly, the Atma discards the old physical body and acquires a new body. The text is rich and abundant with beautiful analogies like in the above Shloka.

Sri Krishna also reminds Arjun of his responsibility as a warrior or his Swadharma to fight for upholding Dharma. He adds that by performing one’s Swadharma, one attains Moksha while doing the opposite brings forth infamy and downfall. The character sketch of Arjun and his dilemmas are very similar to our present day predicaments, be it in the personal or professional walk of life. Thus, one can deduce from the Bhagavad Gita that life’s fundamental questions haven’t changed. Instead, they have just changed their forms.

Various scholars observe that although the biggest management schools teach us how to work well, through a range of techniques, including management science, organisational behavior, and leadership theory, they miss focusing on the most crucial part – the why – the intention behind doing the work. This tendency to work for our own sake, arising from selfish attachment to the results, leads to extreme pain in the form of stress and emotional turmoil. Sri Krishna comes to our rescue when he adds that whatever social duties we perform, whatever food we eat, whatever we must do, should be as an offering to the divine.

Such an attitude transforms the seemingly mundane chores of life to the service of the supreme consciousness, thus also building a sense of detachment. Quite typically, people associate devotion with an activity restricted to our places of worship, but this act of Samarpan in our daily lives can change the way we function in our home and our work-spaces.

Gita puts forth a ‘larger-than-life’ framework and puts things in perspective as we start unfolding the temporal nature of the body and the divinity in us. Sri Krishna talks about the Kshar Purush (temporal divine being) and the Akshar Purush (eternal divine being). As this Akshar purush moves from one body (Kshar Purush) to another, it carries along with it the five senses, like the wind carries with it the fragrance of a flower. This discarding of one body and movement to the next happens due to the Karmic cycle of Karma and Karmaphala (cause and effect). Our attachment to the physical body prevents us from seeing this, and hence the cycle of birth and death continues. It also elucidates that beyond and above the Kshara and Akshara Purusha is the Purushottam, the supreme divine god who is the absolute truth. Sri Krishna then further lays out practical steps for self-realisation through Yoga.

At the Gita’s beginning, Sri Krishna tries to motivate Arjun at a mundane level. Then he goes deeper and starts explaining to Arjun the nature of Karma. He asks Arjun to perform his deeds without any attachment to their fruits. This science of working without desire for rewards is called the yog of the intellect or Gyana-Yog. He further advises that the intellect should be used to control the desire for rewards from work. By working with such intent, the bondage-creating karmas get transformed into bondage-breaking karmas, and a state beyond sorrows can be attained.

With the help of the beautiful analogy of the lotus leaf, Shree Krishna says that just as the lotus leaf floats atop the surface of the lake, but does not allow itself to be wetted by the water, similarly, the karm yogis remain untouched by Paap or sin, although performing their duties, because they perform their tasks in cognition of their divine form.

Arjun is intrigued to know more about the enlightened beings. Sri Krishna, therefore, describes how persons who have attained enlightenment are free from attachment, fear, and anger. They are undisturbed and equipoised in every situation. He also explains the progression of afflictions of the mind—such as greed, anger, lust, etc. and advises how these can be overcome.

Lord Krishna adds in verse 15.20 that he has thus shared the secret principle of Vedic scriptures with us.

In the form of Bhagavad Gita, our Indic traditions have laid down a manual for life, with whose understanding a person not only becomes enlightened but fulfils all that is to be accomplished in this human birth. The present – day afflictions like mental health challenges, family breakdowns or economic disparities can be solved using the very principles laid down by Sri Krishna in the Bhagavad Gita.  Even the more enormous disruptive forces like corruption, lack of moral leadership and terrorism can find their answers in the Bhagavad Gita, creating a better world order.

It is the beauty of the Bhagavad Gita that it does not prescribe a recipe; instead it offers us a framework with multiple routes to choose from. Krishna acts as a facilitator for Arjun and empowers him to understand the ultimate truth. It also helps us understand that our confusions and challenges are smaller than us as a spiritual being. Thus, the study of the Gita and inclusion of its learning in our classrooms, boardrooms and most importantly in our homes is an imperative step in Lok kalyan. Krishna is calling us with a message. Are we listening?