2. The Spiritual Significance Of The Bhagavad Geeta 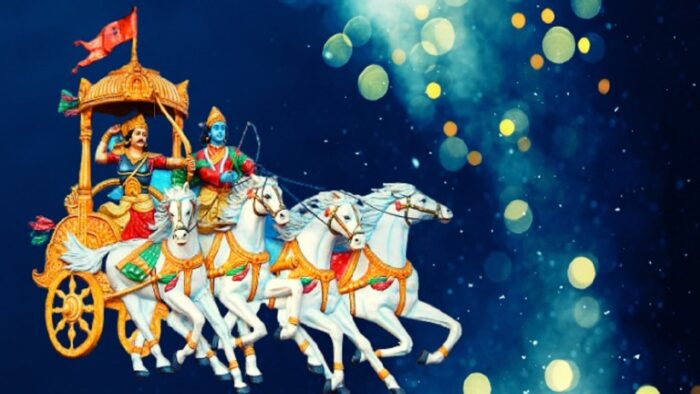 Bhagavad Geeta’s (Geeta) uniqueness is in its stance of neither negating a specific path nor insisting on a specific path. Geeta enables such an understanding because of its comprehensive philosophy. This is the secret behind why all of the great acharyas holding directionally diverse and opposite views felt compelled to take the support of Geeta in achieving their individual objectives. Thus, while non-sectarian in its disposition, Geeta is a favorite of all Sampradayas and equally loved by folks of theistic and atheistic dispositions.

All ancient Indian narratives aim at educating and enlightening the individual. Many of these narratives may sweeten the deal, albeit in an impotent and vain manner, via promise of wealth, health, progeny, etc. Gita is an exception to this rule. Gita also describes an outcome and the benefit, after recommending a course of action, yet it states it succinctly and without any intention of mollycoddling. Two examples below illustrate the point:

(One who comprehends ‘Yoga-vistar’ of Bhagavan becomes steady in the Yoga.)

Sanatana Vedic dharma distinguishes itself from other philosophical or religious traditions of the world through its three foundations:

Great Maharashtrian saint and commentator of Bhagavad Gita of 13th century, Sri Jnaneshwara has described this essence of Bhagavad Gita by stating that “while the tree may look at the fruits and seeds as its purpose, for the fruit, its own existence is its purpose and that is the essence of (कर्मण्येवाधिकारस्तेमाफलेषुकदाचन BG 2:47). Karma is its own reward! Do it with diligence. Of course, the performance of karma requires Jnana (knowledge) and when an individual feels that s/he may have reached the limits of these two, the role of Bhakti becomes important. Gita solves the problem of the choice of karma via Swadharma and of Jnana via seeking of knowledge from whoever is the expert, yet leaving the onus of its synthesis and acceptance to the seeker. Gita discusses the path of Bhakti as something to be experienced and free from the dogma of any sampradaya.

Vedas emphasize Dhyana. Upanishads emphasize Jnana. Ramayana emphasizes Neeti, Mahabharata emphasizes Karma and Bhagavata emphasizes Bhakti. Bhagavad Gita emphasizes balance—‘Samya-Yoga’ and ‘Samyak-Buddhi’—between all the above and their pragmatic usage. It does this in only 700 verses. This is an extraordinary feat.

A seeker of knowledge approaching BG from a specific desired POV will find whatever s/he is looking for: Karma, Jnana, Bhakti, Yoga, Samkhya, Nyaya, Dvaita, Advaita, Tyaga, Moksha or Sanyasa. Of course, the dominant discussion centers around Karma-Jnana-Bhakti, difference between them, their interactions and their Samanvaya. The debate and discussion are as old as Bhagavad Gita, i.e., more than 7500 years old!

Newer commentaries are written on Gita all the time. The oldest commentary I am aware of is that of Adi Shankara while the latest one I am aware of is by my good friend Jefferey Armstrong. Of course, there were many commentaries before Adi Shankara and he has referred to them when he writes, ‘अनेकै: विवृतपदपदार्थवाक्यार्थ – न्यायंअपि‘.  Yamuna Muni or Yamunacharya was the Guru of Sri Ramanujacharya. Yamuna Muni in his ‘GitarthaSangraha’ summarizes the essence of Gita in the very first verse, ‘स्वधर्म-ज्ञान-वैराग्य-साध्य-भक्त्यैक-गोचर:Iनारायण: परं ब्रह्मगीताशास्त्रेसमीरित:’ Ultimate objective—Narayana—is obtained through Bhakti only and Swadharma, Jnana and Vairagya are the tools. What is important to know is that Adi Shankara has accepted this position too when he writes, ‘मदधीनंकर्मीणांकर्म-फलंज्ञानीनांच ज्ञानफलम्’. Outcome of Karma and outcome of Jnana is ultimately in the control of Ishwara. Yumuna Muni elucidates the core of BG, ‘त्रयाणांअपियोगानांत्रिभि:अन्योन्य-संगम:’, i.e. inseparable connection between the three not unlike weight, volume, and flavor of one’s favorite sweet dish. And yet it is possible to improvise this further by visualizingज्ञान = भक्ती = कर्म

Gita takes a special view of human dynamics and interactions such as varna and ashrama system, gender relations, emphasizing between Karma-Jnana-Bhakti, himsa-ahimsa, modes of sadhana and worship, choice of Darshana (e.g., Samkhya vs Yoga), Gunas (satva-raja-tamas) and their application to Karma, Jnana, Shraddha, Bhakti, Ahar, Dana and Tapa.

The beauty of Gita is that while it emphasizes Varna-Vyavastha as a natural setup (prakruti), it points out its limitations (vikruti) and it transcends both (Sanskriti). Gita takes Varna-vyavastha to the next level—Brahman and Kshatriya as Guna-pradhan and Vaishya and Shudra as karma-pradhan. Of course, all of them will do karma and all of them must imbibe virtues. Gita describes Brahma-karma (शमोदमस्तपःशौचंक्षान्तिरार्जवमेवच | ज्ञानंविज्ञानमास्तिक्यंब्रह्मकर्मस्वभावजम् ||BG 18:42) and Kshatra-karma (शौर्यंतेजोधृतिर्दाक्ष्यंयुद्धेचाप्यपलायनम् |दानमीश्वरभावश्चक्षत्रकर्मस्वभावजम् || BG 18:42) in the language of ‘Guna’ while Vaishya and Kshudra-Karma (कृषिगोरक्ष्यवाणिज्यंवैश्यकर्मस्वभावजम् |परिचर्यात्मकंकर्मशूद्रस्यापिस्वभावजम् ||BG 18:44) in the language of Karma/activities.

Relevance of BG to our times

Gita refines the existing philosophy and insights of Sanatan dharma. Let’s look at the subject of ‘Ahimsa’. Some folks find the encouragement of Gita (Krishna’s encouragement to Arjuna to fight and kill the enemy) as attractive and charming while others find it upsetting. Adi Shankara finds inspiration for ‘Advaita’, Mahatma Gandhi for ‘Ahimsa’ and Nathuram Godse for ‘killing Gandhi’. It is for this reason that understanding the essence and nuances of Gita are important. Gita wants to convey ‘subtle and refined’ thoughts. For example, Gita does not want to justify raw violence, rather it wants to convey a finer point, i.e., a violence for the right reasons with peaceful and calm mind can be superior to superficial application of non-violence. Arjuna describes his confused state (moha) right at the beginning (कार्पण्यदोषोपहतस्वभावः; पृच्छामित्वांधर्मसंमूढचेताःBG 2:7), Krishna brings up this very subject with Arjuna after telling him the Gita (कच्चिदज्ञानसंमोहःप्रनष्टस्तेधनञ्जय BG 18:72) and Arjuna responds with clarity (नष्टोमोहःस्मृतिर्लब्धात्वत्प्रसादान्मयाच्युत BG 18:73). Bhishma is venerable, Drona is a Guru and Kaurava brothers are first cousins. Krishna is asking Arjuna to kill the other side free from enmity.

Thus, objective of Gita is to eliminate the confused state (moha) of Arjuna, and by implication that of an individual or of society. Gita sets forth three points: 1. Ahimsa as principle, 2. Ahimsa as default, and yet to be ready for himsa as dharmic duty and 3. Necessary act executed without enmity. Otherwise, there is no need for confusion about Gita’s preference between violence and non-violence. Gita is an Upanishad, and it is the summum bonum of all Upanishads, and all upanishads talk of nothing but ‘ahimsa’.

Gita is comprehensive in its vision yet open-minded and pliable to suit changing times, places and circumstances. Gita is a Kama-dhenu. Ordinary cow gives milk. Kama-dhenu gives what is desired by the seeker. Gita provides ‘pure’ Vibhutis for a Sadhak in the 7th Adhyaya and ‘Vibhutis’ for meditation and contemplation in the 10th Adhyaya. Gita demands individual efforts, ‘उद्धरेतआत्मनाआत्मानम्’ BG 6:5’ and also assures help from above to one who is sincere about one’s effort, ‘तेषांअहंसमुद्धर्ता’ BG 12:7). Gita is crisp and succinct in distinguishing between ‘Daivi’ and ‘Asuri’ characteristics. Gita demands Shraddha yet does not undermine Buddhi. Gita is assertive about its recommendations yet insists on total freedom of the recipient in accepting or rejecting its message. In fact, Gita insists that one must follow its advice only if one is convinced of it. No ‘sampradaya’ or ‘ideology’ dare say such a statement. Thus, Gita is above and beyond any ideology and that is precisely why it is relevant for our times.