1. The Spiritual Significance Of The Bhagavad Gita 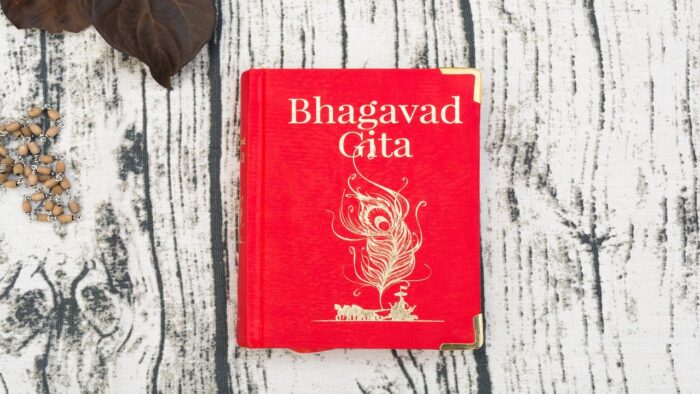 The Bhagavadgita is one of the foremost works of Sanatana Dharma that has served as a spiritual lighthouse for time immemorial. The text and its many commentaries, by both traditional and secular scholars, have provided the wisdom for life for the seekers from all walks of life. The genius of Sage Veda Vyasa shines brilliantly as we realise that Bhagawan Krishna’s teaching to Arjuna in the Kurukshetra battlefield, is also applicable as we face our daily battles in the Dharmakshetra of our human mind. As per one of the commentators Sri KS Narayanacharya, the main thrust of the Gita’s thought flow is it exhorts one to reach ‘perfection’ by Karma (action) combined by right Jnana, Bhakti and Surrender.

Man’s quest for being a better version of oneself is a journey to be made on both adhyatmika and loukika fronts in parallel. This journey itself may be considered as ‘spiritual upliftment’. Everyday offers an opportunity for the sadhaka to conquer the lower self’s needs and progress towards the higher self. No such progress made over a period of time is guaranteed to last, unless it is followed through with rigorous practice.

In this context, this essay discusses the scope of spiritual upliftment – the progress towards perfection by expanding on the teachings from 2 verses of Dhyana Yoga (Chapter 6).

Elevate yourself through the power of your mind, and not degrade yourself, for the mind can be the friend and also the enemy of the self.

O mighty-armed son of Kunti, what you say is correct; the mind is indeed very difficult to restrain. But by practice and detachment, it can be controlled.

(Both verses translated from)

Body of the Essay

It can be established by Pratyaksha (Perception) and Anumana (Inference) that there are a wide variety of stimuli in our world that trigger a sukha and dukha responses in our Atman (selves). It can also be seen that a certain category of world experiences (like attainment of material wealth, worldly desires etc.) yield a sukha that is temporary / lower in nature, in comparison to others (like smarana of Almighty, association with Sajjanas, Paropakara etc.) that leave a more lasting impression in self. For this purpose, the latter can be considered as a higher form of sukha. In verse 6.5 of The Gita, this difference in category of experiences is highlighted in the first word (uddharet—elevate). It is also clear there is scope for one to leave the lower category of experiences and elevate oneself to reach one’s higher nature. However, such an elevation is not guaranteed or natural and needs effort from the Sadhaka. The effort itself should come in the form of activities or a state of mind to make the Atman (self) available to be influenced by the higher self.

For the purpose of this essay, the solution to this conundrum is taken from verse 6.35. The promised elevation in the state of mind will come to fruition only with Indriya-Nigraha coupled with Abhyaasa (repeated practice of an action).

Today when our senses are assaulted by a seemingly rich variety of options to indulge with, a deep understanding of the concept and practise of Indriya Nigraha is the most required antidote in these times. Indriya Nigraha refers to the complete self-control of the 5 sense organs (Sight, Hearing, Taste, Touch, Smell) and Mind. The owner should exercise total command over the senses for them to elevate his experiences to the higher self. For this, the Gita advises the sadhaka to withdraw one’s Indriya’s attention to the lower triggers, like how a tortoise would withdraw its limbs into its shell. This practice of Indriyanigraha (इन्द्रियनिग्रह) is repeatedly extolled as the virtue to be nurtured and celebrated in a person also in all our Itihaasas, Puranas.

While Indriya-Nigraha offers some respite from the onslaught borne by the senses everyday, this by itself is insufficient to the sadhaka to elevate and remain at the higher level of sukha. The essential practice of Abhyaasa pitches into here to ensure repetition of a practice, Indriya-Nigraha here, and handhold a sadhaka towards excellence. While Abhyaasa by itself helps one to achieve one’s secular goals, when coupled with Indriya-Nigraha the practice yields spectacular benefits in one’s adhyatmika journey.

Let us briefly look at how Abhyaasa with Indriya-Nigraha can be applied to the Karma-Jnana-Bhakti triangle:

Karma (Actions) refers not just to the outer bodily activity but also inner activity of oneself can be considered a strand of Karma. As one performs his daily activities in line with his true innerself, made possible by Indriya-Nigraha with the excellence made possible by abhyaasa, then circumstances start to reassemble around that inner self. Right possibilities then arise and come alive for a Sadhaka to perform his Karma. This gives an opportunity for the sadhaka to elevate the nature of one’s karma also from Stage 1 to Stage 4.

Bhakti, by its very nature, promotes Indriya-Nigraha where a sadhaka’s all senses are subdued to reoriented to a single focal point of paramatman. In Bhagavata Purana the different modes of Bhakti towards Almighty are described as 9 – Shravanam, Kirthanam, Smaranam, Pada-Sevanam, Archanam, Vandanam, Dasyam, Sakhyam and Atma Nivedhanam.

During an act of Bhakti, there may arise several impediments. Abhyaasa again is essential here to ensure a ‘steady and continuous flow of deep attachment to God’ transcending all worldly attachments. As the sadhaka repeats the many forms of bhakti with unshakable conviction, there arises the possibilities to elevate towards higher forms of bhakti – ‘an intensive and all-absorbing love that completely immerses the sadhaka in blissful contemplation of Him and the sadhaka is lost to all his surroundings.’

In the Adhyatmika world, Jnana may be defined as the inward experience of truth. It is the insatiable thirst to know about the omnipresent, omniscient Almighty and the right conduct to attain the knowledge from the right Guru.

The first step towards acquiring Jnana is the preparation of Sadhaka with Indriya Nigraha. With continuous practice, the sadhaka’s Jignaasa (Jnaatum Icha / Interest to learn) arises. As the sishya hones his / her intellect with appropriate practices of Karma, Guru and Ishvara Bhakti, there is also increased readiness towards Jnana attainment. In such a state of mind, there is elevation in the sadhaka from interests in worldly affairs to more interest in Satsanga.

Then with the grace of Ishvara and Guru, the sadhaka attains the Jnana to carry out his worldly tasks with a Nishkama Karma mindset combined with a dedication as a service to God. Once Jnana is lit in the mind of a person, it is permanent, unlike art that needs constant practise. Such a person is called a Jnaani.

The pursuit to perfection for oneself is a combined yoga of Karma, Bhakti and Jnana in daily life.  The mind along with the Indriyas offers a formidable weapon in the Dharma Kshetra to a sadhaka if employed under complete control of oneself. The same weapons handled without care and training can dangerously derail one’s pursuits, even without one’s knowledge.

With combined application of Indriya-Nigraha and Abhyaasa, the Gita teaches the Sadhaka to rise from mediocrity to higher levels of excellence, and even further to one’s ‘perfect’ self in adhyatmika and loukika life.