Women And Politics In The Epics – A Conversation 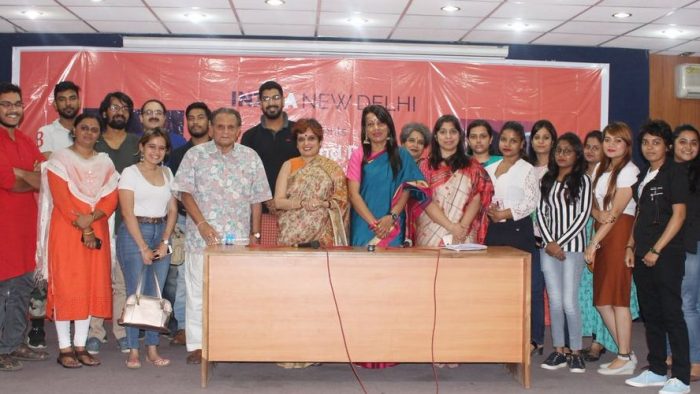 Were women empowered in ancient India? It is a big ‘Yes’! The phrase ‘women empowerment’ will transport you to a terrain of mixed views; the weight will shift more to what we perceive with our eyes and what the media infuses us with! And there is no dearth of literature in the digital world. Just a click or a touch with your fingertip and there you are, surrounded by an ocean of both positive and negative news and information. In this conversation blogger and author Manoshi Sinha interviews well known author of women centric books Kavita Kane on women and politics in Indic Epics.

Women in ancient India enjoyed equal status with men. They were educated by choice. They were trained in the art of warfare by choice. The Rigveda finds mention about a warrior queen Vishpala, who was trained in the art of warfare. She lost a leg in battle; an iron leg revived her spirit and she resumed her battlefield exploits. Look at the world around you – that women is empowered is evidenced by their prevailing presence in courts and public office space, corporate houses and Parliament, and what not!

What about women in the epics? Archaeological evidences and written records prove the Ramayana and Mahabharata as History not Mythology. Women in the epics, such Manthara, Kaikeyi, Satyavati, Draupadi, to name a few, directly or indirectly played an instrumental or little role in politics, in administration, in steering the lifeline of two great dynasties.

Recently, IndicA Delhi organized a talk on the theme ‘Women and Politics in the Epics’ between Kavita Kane and Manoshi Sinha at Bharatiya Vidya Bhavan in Delhi. Kavita Kane is a revolutionary force in Indian writing, especially on mythology, epics, and Puranic history. She is the author of five bestselling novels – Karna’s Wife, Sita’s Sister, Menaka’s Choice, Lanka’s Princess and her latest The Fisher Queen’s Dynasty. Karna Sangini (a series to be featured in Star TV) is a TV adaptation of her book Karna’s Wife. She is a former journalist, having worked for 20 years in various media houses including Daily News and Analysis and The Times of India. She opted to become a full time author after the success of her debut novel, Karna’s Wife.

Manoshi Sinha is an author of 7 books including two books on Krishna – The Eighth Avatar and Blue Vanquisher. She is the editor of a business print magazine and founder editor of myindiamyglory.com, an e-magazine that brings the present and past of India to the readers, with a special focus on history and heritage. 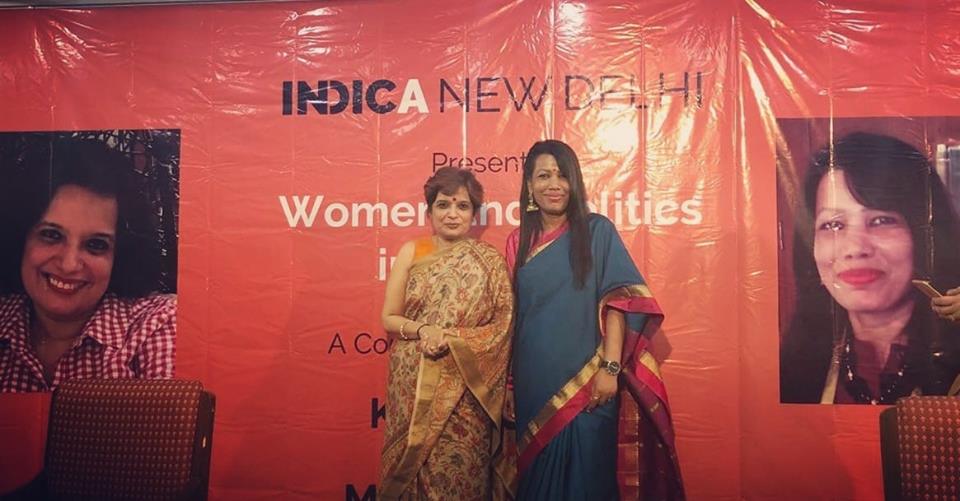 Here is a summarized version of the talk between Kavita Kane and Manoshi Sinha on the theme, ‘Women and Politics in the Epics’:

Manoshi Sinha: My first question related to the topic is from the Ramayana. It is about Manthara, a lesser known character but who greatly influenced Ayodhya politics indirectly. Manthara raised the motherless Kaikeyi during her childhood. Later when Kaikeyi was married to Dasharath, she came along with the queen to stay in Ayodhya. Manthara played an instrumental role in convincing Kaikeyi that the throne of Ayodhya belonged to her son Bharata. It was following her advice that Kaikeyi in turn convinced Dasharath to send Rama to exile so that Bharata would be king in his absence. Kavitaji how would you project Manthara considering her role and influence, though indirect, in the politics of Ayodhya during her times?

Kavita Kane: Manthara is the most politically conscious character in the Ramayana who is not just aware of her status in the palace but that also of Kaikeyi, the chief and favourite Queen of King Dashrath.  She knows exactly who is what in the politics of the palace and she behaves according to the status of that person. She has no status or significance but she knows she wields enormous influence on the most important person in the palace – Kaikeyi. The queen Kaikeyi loves as  her foster-other. And that is how her character plays out, be it her cunning, her persuasive skills or her ability to sow distrust and doubt in others especially Kaikeyi. Just when the time is ripe and right, Manthara poisons Kaikeyi’s mind and so insidious yet convincing are her words to make Kaikeyi lose all her power of decision and discrimination.

Manthara  is the personification of that insecurity that lingers in most people be it the most powerful or the formidable and that sliver self-doubt becomes the chink of armour and Manthara knows how to hit where it hurts most. The entire political game in the palace is started and fanned by her, rising out of her own self-preservation. She knows her position holds strong and safe only if Kaikeyi is the chief queen and the Queen Mother and to consolidate it, she has to crumble the love and trust of each royal family member starting with Kaikeyi, over whose shoulder she will carry on her deeds and misdeeds.

Manoshi Sinha: Kaikeyi maintained strong relations with her maternal family even after her wedding to king Dasharath. Her brother Yudhajit visited her quite often and he regularly took his nephew Bharata and also Shatrughna, the step son of Kaikeyi to the Kaikeya kingdom for vacation. Kaikeyi was Dasharath’s charioteer in his military campaign against Sambarasura. During the battle Dasharath’s chariot broke and Sambarasura’s arrow pierced the king’s armor and lodged in his chest. At this juncture, it was Kaikeyi’s presence of mind, bravery, and wit that saved Dasharath’s life. She quickly repaired the broken wheel and drove the chariot away from the battlefield. Later, she nursed the king back to good health. Dasharath offered her two boons which Kaikeyi chose to ask in an opportune time. And when the time came, she asked the boons for her benefit, in claiming the throne for her son Bharata and sending Rama to the forests in exile. How is Kaikeyi’s role in Ayodha’s politics important, though many critics consider Kaikeyi as a bad character? And also your views on a woman maintaining strong relations with her maternal family in today’s context drawing example from Kaikeyi, the timeline of which dates back to beyond 7000 years.

Kavita Kane: Kaikeyi is one of the most complex and layered character in the epic. She is beautiful, clever, kind and doting yet very swiftly she transforms into the antagonist as one of the most despised person in the epic, including her son Bharat, for whom she loses her all to give him his royal right and throne. Her transformation from white to a a black character is not just interesting, it is pivotal to the plot. Simply said, without her, the story would not have gone forward. She is the favourite queen of the king, and soon is promoted to the chief queen, not because of her youth and beauty but her show of bravery when she saves King Dashrath on the battlefield for which he grants her two boons, she uses at the appropriate time. Till that moment when she demands her two boon, she is a most apolitical person, barely aware of her rights as a wife, a queen, a mother. She is this powerful, perfect person yet in her too lingers a faint trace of doubt and insecurity which is to be her downfall. There are various threads and folk stories which try to understand the motive of her sudden change in behaviour -and eat is interesting, one of them, being, that she knew the future and it was only she who was destined to send Ram away into exile in the forest. Whatever the case or story might be, Kaikeyi is one of the remarkable character, remembered not just for her villainy but the piteous fall of a powerful person.

Manoshi Sinha: Satyavati was also also called Matsyagandha. She was the daughter of a fisherman. She rose in position and power to become the queen of Hastinapur. It was she who saved the clan from perishing or else the Mahabharata would not have happened! At her request, Ved Vyasa fathered the children of the widowed queens of Vichitravirya her son according to the prevalent custom of Niyoga. Satyavati actively took part in administrative affairs and in decision making after the death of her husband Shantanu. How did Satyavati, according to you, influence the politics of her times though she was not from a royal family?

Kavita Kane: Satyavati is rarely seen as a political person, though ironically it was her decisions and actions which inevitably lead to the bloody war in her family at the great battle of Kurushetra. She is a fisher girl who becomes the queen, and it is ironically her dynasty which eventually rules the kingdom of Hastinapur.If it were not for her, the seeds discontent and disappointment. of power and intrigue, of rage and revenge would not have been sown. She is an example of a person from humble, even humiliating origin,  who rises in station to rule and to reign to become the most powerful person of the kingdom and when she thinks she has it all, she starts losing one and all.  Yet she has no regrets, no remorse because essentially she is a woman of enormous will and conviction who is ready to pay for the choice and decisions she makes even to the extent that she is defiant to fight destiny and get what she wants. She does but in the process she disrupts the natural and political order, leading and culminating in later chaos and bloodshed.

Manoshi Sinha: Draupadi was also known as Yajnasheni as she was born from a yajna, the sacrificial fire. Though she was also called Panchali, as she was the princess of Panchal, Duryodhana mockingly addressed her as Panchali, connoting the wife of five husbands. Many blame Draupadi as the root cause for the Mahabharata War as she insulted Duryodhana when he fell in the waters in the Mayasabha uttering, ‘Andheka beta andha’. Going by the dewar-bhabhi jokes and pranks, addressing Duryodhan as ‘andha’ was justified, but she should not have uttered the prince’s father’s name. This is what majority opines. And Duryodhana took revenge, making the Mahabharata war happen. Was she really responsible for the war that changed the very population landscape of Bharat and neighboring countries, as lakhs died? What are your views on this?

Kavita Kane: Draupadi is born in war, born in hate, born in vengeance. She is destined for war, and her very birth, her marraige, her relationships all veer to one goal – the great war. She was not responsible for the war, she was the warning of the war itself : which both the Pandavas and the Kauravas are not aware of. She is the fire who will the burn and destroy not just the family and the kingdom but the rot, the decay and the degradation to pave way for a new world even though in the process she loses all her sons, her brothers and her father. Yet she stands brave and strong among the ashes and looks to a future amongst the ruins through her two actions : one, bringing up the sole heir, her grandson Parkishit. And her act of forgiving Aswathama, the killer of her brothers and sons. We see her in the glory of love and beauty, in the crest of  fury and vengeance and the nadir of her loss but she resurrects herself and the others by this great act of forgiveness showing not just her personal strength but the depth and power of forgiveness in the bleakest hour of grief and hopelessness.