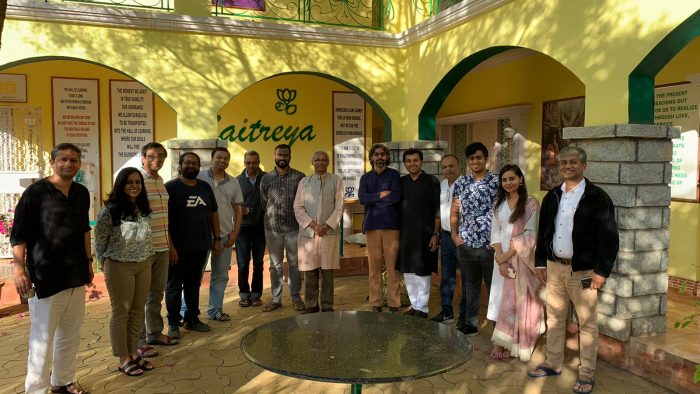 Greatness discards pretense and when we come into contact with such greatness, we lose the need for our pretense too. We become receptive. We, a group of twelve individuals – designers, teachers, creative professionals – all piqued by an innate curiosity traded our pretense for wisdom last weekend.

Weekend with Wisdom, organized by the Indic Academy facilitates a free-flowing exchange of ideas between an Indic intellectual giant and a group of individuals with the vision that the resultant learning and contemplation will create a new Indic stream of thought or a new body of work inspired by the scholar’s work.

This group was carefully calibrated to bring people with experience in technology, aesthetics, design and digital product marketing – a composition that reminded one of Malcolm Gladwell’s archetypes of mavens, connectors and salespersons. This combination is perhaps needed to advance the vision of taking the Indic wisdom to a billion people across the world in the form of new products, services and experiences.

Dr. Vinod Vidwans, an Indic stalwart is a cognitive philosopher, a designer, a portrait painter and a teacher – a polymath known for his work cutting edge, multi-disciplinary work in Computational Music. 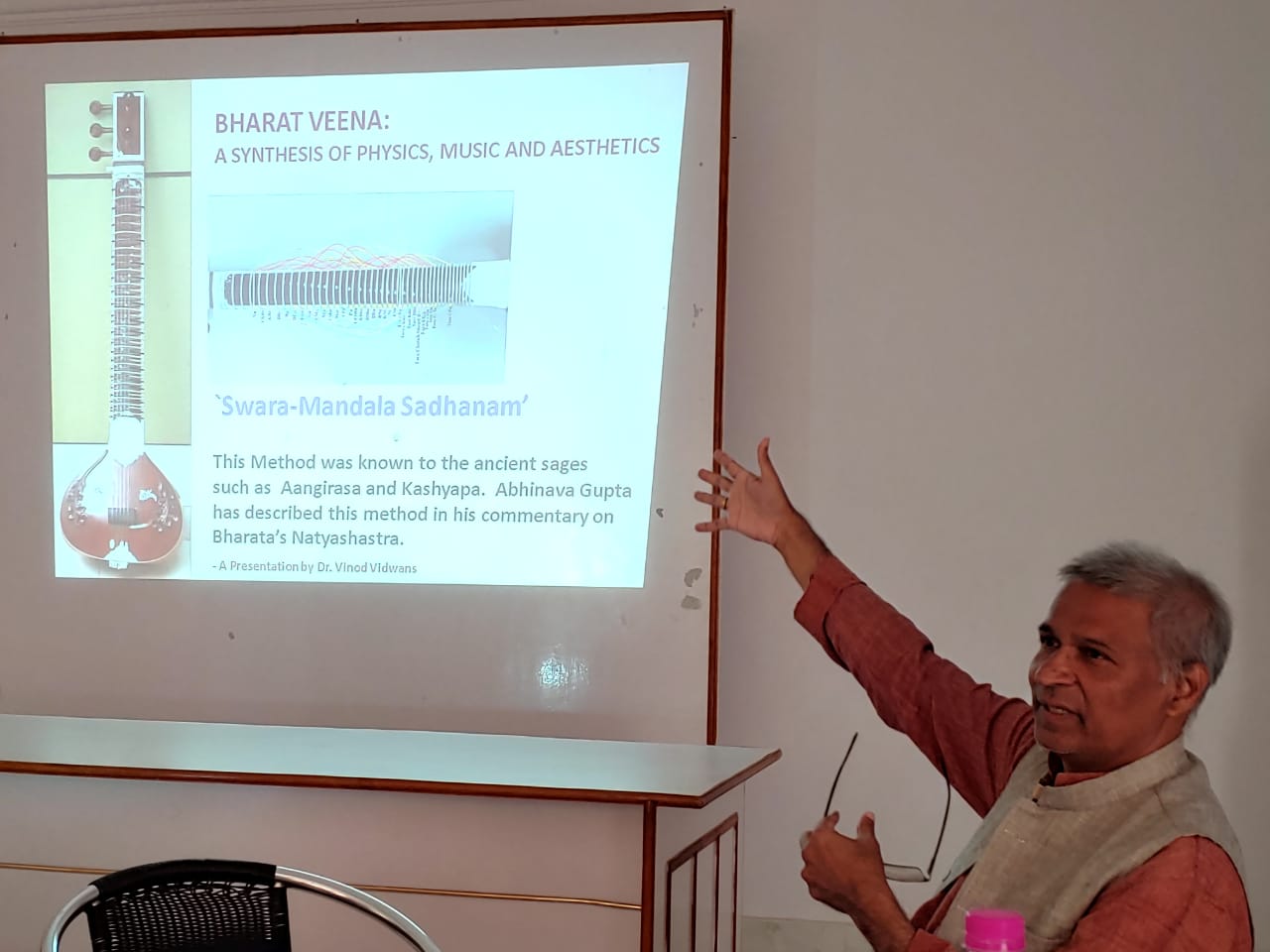 The most remarkable element of being in Dr. Vinod’s company is not even the mind-blowing range and depth of his work. It is his simplicity – an embodiment of the idea of ‘Trikarana Shuddhi’ where the thoughts, words and actions are in a beautiful, organic symphony.

The School of Ancient Wisdom, Bengaluru served as a perfect backdrop for this meeting of minds.  The gates of the School open into a world of non-manicured greenery. Trees and bushes of flowers have been planted with love but not unnecessarily pruned. There is little human intervention. Nature has been allowed to take enough charge with the flora so that the fauna can dwell uninhibited in these surroundings.

As if to prove this, an Asian Paradise Flycatcher – the Swargiya Pakshi – merrily perches atop the branch of an old tree and shows off to us its beautiful white tail. Taking in its beauty, we pause, as we often do, when overwhelmed with the loving presence of the creator in the created, in the everyday experience of aesthetic bliss, and wonder who is the Master of It all.

This free-flowing space dedicated to the ageless wisdom of our land took us deep into the Indic vision of creative and integral excellence, its unitive view of consciousness and creative coexistence, and the roles of multifaceted nature of truth, transcendence, intuition, imagination, and meditative processes involved in creation.

“Let it unfold” – With these potent words and true to the design ethos of ‘serendipity with a bit of structure’ of the ‘Weekend with Wisdom’ initiative,  Dr. Vinod Vidwans set the tone for a 3-day reflection on Creativity, Design, AI, Consciousness, Unity of knowledge and the very process of Meaning making in humans. All of this grounded in Indic sources with Bharata muni’s Natyashastra serving as the core reference.

We started off trying to theorize what we mean by ‘creativity’ –

– Is it a uniquely human phenomenon?

– Is it just applied imagination – Is it an ability?

– How do we understand the terms original, novel and unique that are associated with creativity when it is framed as a human ability?

– How do we disambiguate between innovation, invention, discovery and serendipity – All of which are used in conjunction with creativity. 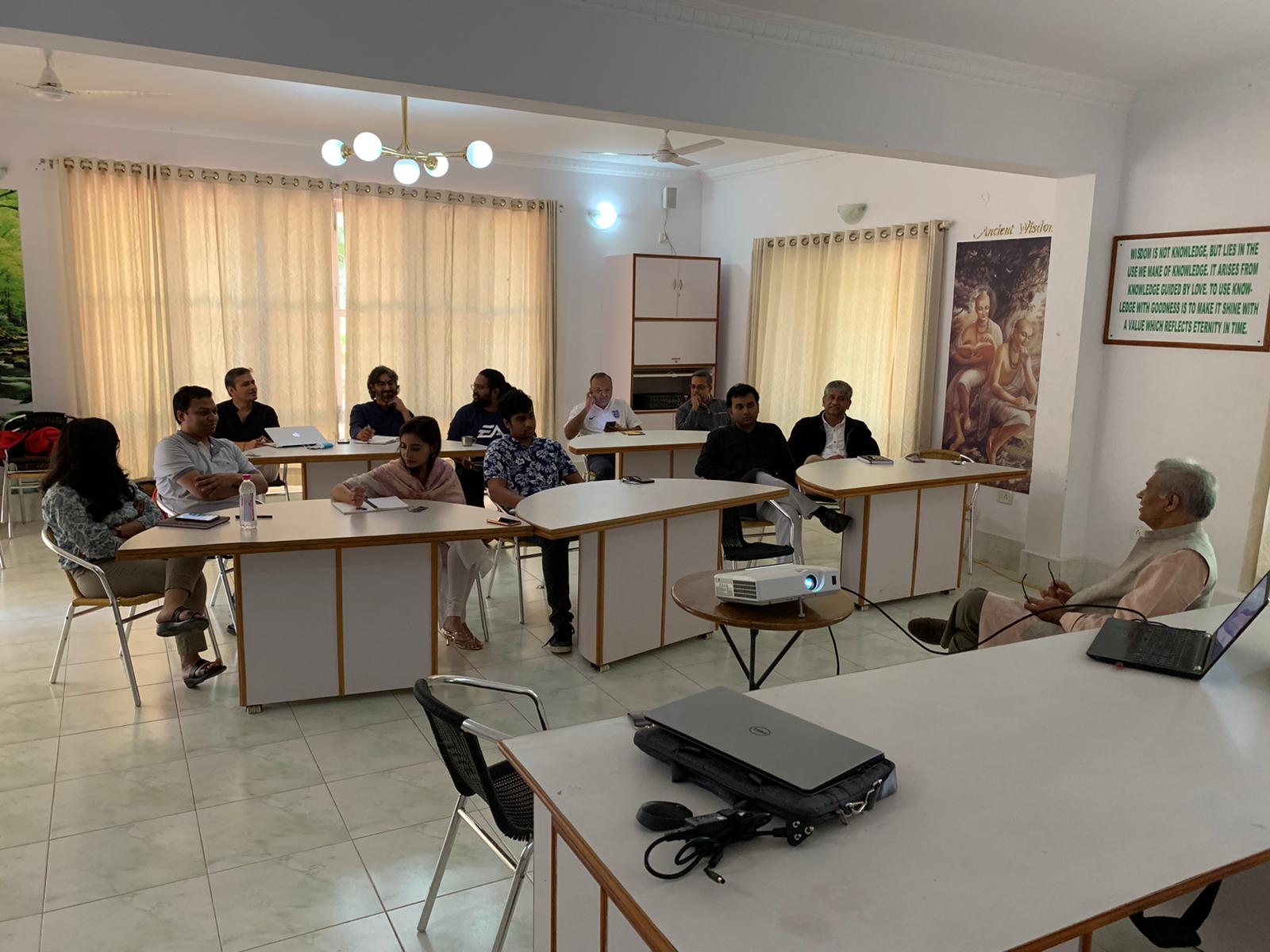 What is the ontological status of creativity – ‘Creation happens’ and so we need to inquire about creativity at 4 levels:

– Cosmic creativity – The stuff of galaxies

– Socio-Cultural creativity – The creative consciousness of the collective

– Individual creativity – A reflection of some unique ability

All of this pointed to the need for developing a holistic perspective. A new way of looking at the world rather than being smug under the cover of reductionist definitions.

Difference between a ‘Darshana’ and a ‘Philosophy’ perhaps?

From a reflection on creativity we proceeded to an inquiry of ‘logic’ – The principles and limitations of Inductive and Deductive logic. The relationship between ‘logic’ and ‘truth’. 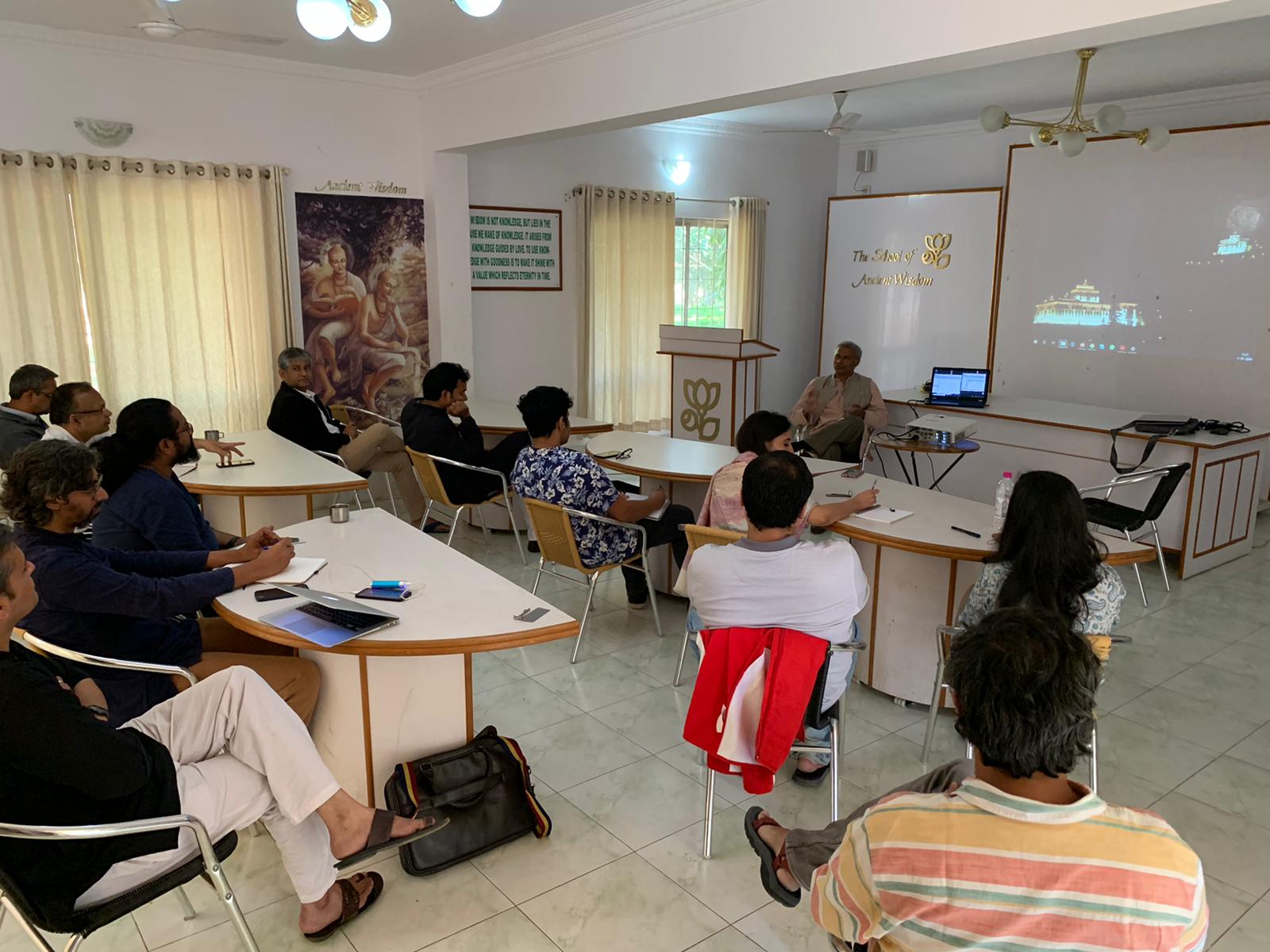 This led us organically into a conversation on Design – Form and function are the usual constructs of Design but that understanding can be constraining.  This redundancy of Design to only a level of functionality is further exacerbated with the over-reach of principles like Design-Thinking.

While the processes of Design-Thinking are useful in a certain context, they do not encompass the true import of Design and can render the creative process to be mechanistic. We need to reclaim the understanding of design and put it beyond mere ‘design-thinking’

Design is the ‘manifestation of intentionality’ – Design is about meaning-making.

This reflection on design as intentionality led us to a conversation on semiotics. The world of rasa, shabda, artha, alamkara, guna, and riti. The beauty of the principle of ‘auchitya’.

This was mind expansion at its best – We were introduced to the brilliance of the creative devices in Indic sources to generate meaning. Literal, indexical, metaphorical, and symbolic. We dipped into the Vaisheshika and Artha Mimamsa principles of dravya, guna, karma, samanya, vishesha, samavaya, abhava, tatparya, swaroopa, beeja, and swyambhu arthas.

In Artha Mimamsa, one of the ways in which meaning has been classified is swayambhu artha: Any entity has meaning by itself. What an incredibly constructive, elevating and empowering idea! ‘I have come into existence and therefore, I have meaning’ – this thought is a powerful antidote to nihilism. Imagine a world where individuals have internalized this idea. Such a world will automatically be engaged in the pursuit of beauty and truth.

We end this with a discussion about the difference between a designer and an artist – The freedom of the artist and the responsibility of the designer and the meaning they need to construct together.

This sets the tone for the next discussion, a transformative exposition on ‘Unity amongst arts’. Drawing from the timeless fount of Indic wisdom, specifically references from the ‘Vishnudharmottara Purana’ – an eloquent discussion between king Vajra and sage Markandeya that throws light upon the interrelationship among art forms, nature of art in general and its relationship with other branches of knowledge.

Dr. Vidwans takes us deep into the inter-relationships between all of forms of arts. Twenty-five years ago, what starts as a musical and intellectual curiosity for Dr. Vidwans, turns into a drive to dispel the oft-repeated, postcolonial notion that the Indian shashtras do not hold well on the parameters of scientific enquiry.

Natyashastra is known as the fifth Veda; Based on the principles of the Natyashastra, Dr. Vidwans has physically recreated Bharata’s Veena, and designed an AI program which can self-generate bandish, and eight thousand new ragas in addition to the two thousand existing ones, thus proving that the Indic texts are not only inherently scientific, but the approach of the ancient Indics towards art, science, and philosophy, too, has been to converge into an integrated whole; guided by the belief that the practice of any discipline of knowledge can lead to the highest truth.

We try to convince Dr. Vidwans that his creation has great potential to be productized – He gently nods, and tells us that he would upload the program online for others to improvize and generate newer experiences – Auchitya.

In Dr. Vidwans’s creation we watch, mesmerised, the human creative ability to keep pushing the boundaries of science.

While several questions are answered, many others keep coming up; staying true to the nature of the human mind. In such situations, one becomes aware of both, the primal human curiosity and the modern human cynicism. The more we immerse ourselves in the world of Indic wisdom, the more amazed we will be, by how it weaves meaning and beauty in every aspect of life.

Our Weekend With Wisdom began on a paurnamasi, the day of the full-moon. It was also the auspicious day of Arudra Darshanam, when Shiva performed the cosmic Tandava and created the srishti through dance.

Over the next two days, in the quiet of the night, as we watched the waning moon being brushed by the silhouette of silently waving leaves and tried to identify the stars illuminating the sky, we were reminded of the words of the Indic Ancients in the Taittiriya Upanishad where they talked about the primal creativity; and the aesthetic bliss therein:

Non existence existed then. Out of the non-existence emerged existence. It created itself, and therefore, it was ‘sukrita’ – that which was well-made. The ‘sukrita’ is ‘rasa’.

The crickets sang in consonance and a knowing night-wind enveloped us with the only truth. 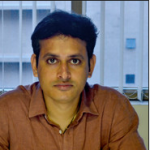