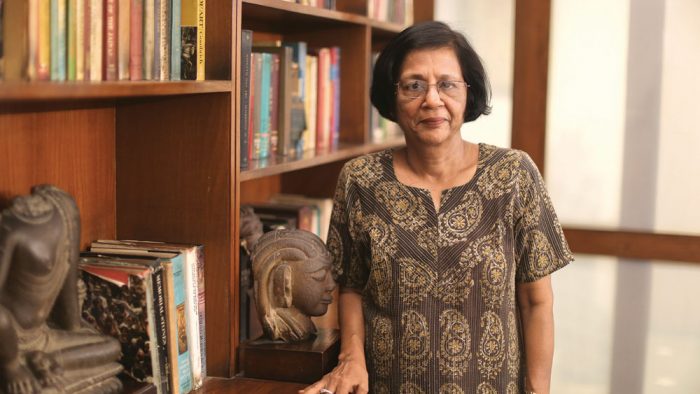 (We at Indic, take the opportunity to congratulate Dr. Meenakshi Jain on receiving ‘Padma Shri’, the fourth highest Indian civilian award, after  Bharat Ratna, Padma Vibhushan, and Padma Bhushan, on 26th January, 2020. We also express our gratitude to Dr. Jain for facilitating a better understanding of our heritage, culture, and traditions through her writings. Indic Academy had organized a ‘Weekend with Wisdom‘ with Dr. Jain. Shefali Vaidya, and M. C. Vaijayanthi have earlier written about their experiences and learning at this WWW . Here is another brief essay by Sahana Singh.)

It was a rewarding experience to spend almost three days with a subject expert like Dr. Meenakshi Jain, along with a bunch of other authors and history buffs in a beautiful resort. The experience was all the more special, because the Govardhan Eco Village run by ISKCON is not just another touristy resort, but one where Krishna pops into your consciousness ever so often; whether at the gaushala, or from the Bhagwad Gita kept in every room, or in the midst of lush greenery, flowers, and butterflies.

Starting from the Arab invasion of Sindh, Dr Jain gave us glimpses of the Islamic period of Indian history – the most traumatic period for Hindus which involved the destruction of temples, languages, and educational institutions. This destruction has been glossed over by most left-leaning historians and media houses in India which has led to a deep hole in the hearts of Hindus who know the truth.

It is all the more painful because generations of Hindus are being raised on falsehoods presented in school textbooks. Had the real history of India been discussed more freely, it would not have been so hard to move on. 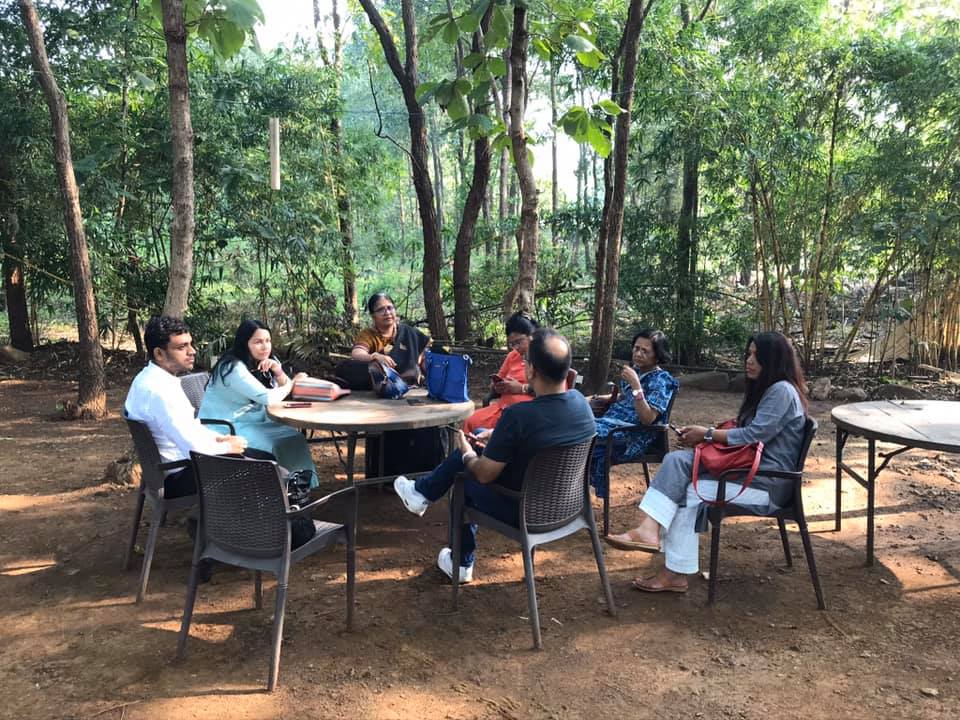 The free-flowing discussions over meals, walks, and huddled gatherings with Dr Jain that we had in the Govardhan resort enabled an intense exchange of thoughts. It was as if we were in a moving classroom. Most importantly, Dr Jain gave a long list of book recommendations and references to enlarge our awareness about what has already been written on the subject.

This retreat came immediately after the Ayodhya verdict and it was just so appropriate that we got to celebrate the prospect of Shri Rama’s homecoming with the very historian who has worked tirelessly to uncover the literary evidence pointing to the existence of Rama’s janmabhoomi that is revered by Hindus down the ages.

I frantically hunted for a sculpture of Rama with Lakshmana, Sita, and Hanuman to present to Dr. Jain before I left for the retreat. The expression on her face when she held it in hands is something I will cherish for a long time.

I was hesitant to give my little book on India’s educational heritage to Dr. Jain but I finally gathered the courage on the second day. The next morning, as soon as Dr. Jain heard sounds of movement in the upper floor, she called out from downstairs, “Sahana, I’ve read your book. I was up at 4 am when you  all were sleeping. You have packed so much information in a small book!”

She called me downstairs immediately to discuss the book, and ask me what I was planning to include in the second edition.

“Let me get dressed and I will come down after that?”

“No, come right now or I will forget what I want to say!”

And so I went down in my as-is bedraggled condition with a phone in hand to note down all her suggestions and references. She was specially thrilled with my references to the library in the ancient Sharada University in Kashmir which was used by the Jain scholar Hemachandra.

Though Dr Jain has done path-breaking work, her efforts have not been recognized by the Government of India which I think is a deep omission. Right now, her book ‘Rama and Ayodhya’ has become a bestseller. And yet, her books have not been reviewed in a single mainstream newspaper!

It is thanks to organizations such as Indic Academy and thanks to authors like Abhinav Agarwal who are taking the trouble to write the reviews of books by Dr. Meenakshi Jain that her works are getting known.

Dr. Jain reminds me of the Brahmavadinis of yore in ancient India who devoted themselves single-mindedly to learning. She wakes up at 4 am which is literally Brahma Muhurta or the holy hour in the early morning when students and scholars woke up in ancient times to catch the energy of the sunrise. She stays away from social media, and makes sure her day is productive. What touched me most about Dr. Jain is her deep desire to share all that she knows and to help younger scholars to produce their best.

The intimacy of the settings helped me to realize why it is important to stay with someone to actually imbibe knowledge from the person. “Weekend with Wisdom” organized by Indic Academy made the concept of gurukulas more meaningful to me. I got a deeper insight into the subject of my own book on India’s educational heritage! Dr. Jain gave me many inputs to help reinforce the second edition of my book that I plan to bring out soon.

Sahana Singh is an engineer, author, editor and commentator who specializes in water/sanitation issues and Indic history. She has authored "The Educational Heritage of AncientRead more