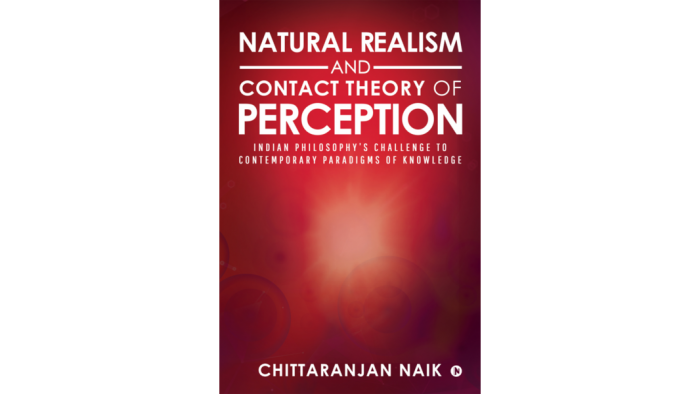 Indic Academy is pleased to announce the publication of its 8th book “ Natural Realism and Contact Theory of Perception” by Chittaranjan Naik.

The author in an earlier interview with Indic Today speaks about his intent behind writing the book “The book was written as part of my contribution to a larger enterprise – the enterprise of reviving Indian culture, and especially the Indian intellectual tradition. A philosophical investigation into the topic of Perception, which this book is about, is of crucial importance for bringing about such a revival. The fact that perception is one of the central pillars on which the Indian intellectual tradition stands is not obvious to most of us today because we have been acculturated for over 200 years in Western modes of learning and have lost connection with our roots. The Indian civilization is a knowledge-based civilization in which the pramanas (the valid means of obtaining right-knowledge) form the central foundations of the culture. And among the pramanas, pratyaksha or perception is the first and foremost pramana. It is therefore called the jyeshta-pramaana. If this pramana should be discounted, the entire foundation of Vedic culture would come crashing down. In our culture, even inferential logic (anumana) is based on the validity of an invariable relation (vyapti) that has been established beforehand through perception; so if perception should get discounted, inferential logic too would get discounted.

But in the contemporary culture that we have inherited from the Western tradition, the perception has no efficacy in revealing the truth of the world. This is because the Western theory of perception is a physicalist theory in which we perceive objects as it gets represented to us by the brain and not as they exist in nature. This dichotomy between the character of the world as it presents itself to us in our perceptions and as it exists in nature was first pointed out by the British philosopher, John Locke. Locke said that we perceive the qualities of objects in the manners that the faculties of perception we are endowed with, present them to us rather than the qualities as they exist in the objects themselves.

He called the qualities that we perceive secondary qualities as distinct from the primary qualities that exist in the objects themselves, and about which we can know nothing. In contemporary language, Locke’s thesis would be called ‘Representationalism’. Though there have been many variants of representationalism over the years, a kind of Lockean dualism continues to colour the speculations of both science and philosophy up to this day. If therefore, our culture is to be revived, it would become necessary for us to refute the Western theory of perception and to reinstate the Indian theory of perception. This is what the book seeks to do. ”

Biography of the author

Chittaranjan Naik, born 1954, has a deep and abiding interest in spirituality and philosophy. It all began with a powerful spiritual experience he had while pursuing post-graduation at IIT. This led him to a study of both Indian and Western philosophies as also of the world’s major religions. He has engaged in philosophical discussions with both Western academicians and Indian scholars. He is a spiritual sadhaka in the path of Advaita Vedanta and has a deep conviction that the six traditional darshanas of Indian philosophy form an integral part of the structure of Sanathana Dharma. He left his job in the year 2007 in order to devote more time to his spiritual quest and to work towards the revival of the timeless Indian intellectual tradition that had once prevailed in the country.

Chittaranjan Naik has degrees in Aeronautical Engineering (B-Tech) and Industrial Engineering (M-Tech), both from IIT Madras. He has worked in various corporations such as Rashtriya Chemicals & Fertilizers Ltd., Indian Express Newspapers Group, Starcom Software, 3i Infotech Ltd., and as a free-lance consultant. He has spearheaded the implementation of many pioneering business-enabling ideas and cutting edge technologies during his professional career.

An extract from the book is given below :

“The challenge for the Direct Realist is to come up with a theory of perception in which the perceptual mechanism would be transparent enough to allow the object in the world to be actually present in front of the percipient. A physicalist theory of perception can never achieve such transparency due to the transforming nature of the operations of the physical causal intermediaries that would be involved in the process. At the same time, the evidence in the form of the correlations that are seen to exist between brain processes and our perceptions of the world seems to confirm the involvement of physical intermediates in perception and further exacerbates the challenge that the Direct Realist faces. There thus seems to be an impasse, an insurmountable barrier that seems to lie in the path of the Direct Realist. Whence would a solution to this problem arise?

From whatever source or direction the solution may come, one thing is for sure. It will be radically disruptive of the present paradigms in both philosophy and science. For, consider this. If the world in front of us can be cognitively grasped as it is through perception, it would mean that the perceived world exists, exactly as it is perceived, at the time of perception. But this contradicts the current belief that the stars we perceive are perceived not as they are now but as they were many hundreds or thousands of years ago. It would also mean that the finite time taken for light to travel from a distant star to our physical eyes is not part of the perceptual process and that the physical bodies we possess somehow do not interfere in the perceptual process. If it should be so, then major parts of the Modern Theory of Relativity will have to be re-written and the conception of our physical bodies and the nature of its involvement in our cognitions will have to undergo a major change. Direct Realism, if true, would not be just another theory that finds its place in the libraries of the academia; it will be a precursor to a major change in our weltanschauung, the way we will look at the universe and our place in it in the years to come.”