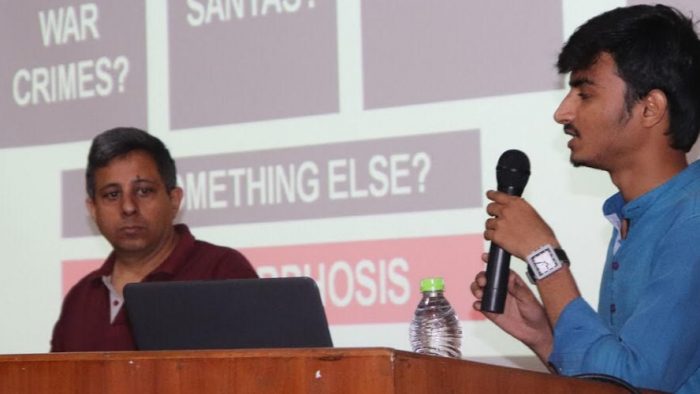 INDICA Hyderabad and The Nationalist forum organised a talk at the University of Hyderabad by Sri Anuj Dhar.The topic of the talk was – The Conundrum: Charting Netaji Subhash Bose’s Journey post 18th August, 1945.

Anuj Dhar a former journalist, well-known for his research and activism related to Netaji Subhash Chandra Bose, especially the issue of his death. Dhar’s 2012 bestselling book “India’s biggest Cover-up” triggered the movement for declassification of the Subhash Bose files. In 2018, Dhar wrote “Your Prime Minister is Dead”, which is the first comprehensive study of the enduring mystery of Lal Bahadur Shastri’s death. Dhar’s latest offering is “Conundrum: Subhash Bose’s life after death” (2019), which he has co-authored with Chandrachur Ghose. This book also inspired the making of the the Bengali movie “Gumnaami”.

Dhar’s talk ventured on the death of Netaji Bose and how the Indian state under Nehru was very adamant in closing Netaji’s case. He detalied the systematic attempts to suppress any investigation into Netaji’s death. There is also the enigmatic figure of “Gumnani Baba: and his strange resemblance to Subhash Bose. Gumnaami baba too was erased from the public’s memory by the state and media. The desperate attempt by the government to put a lid on Subhash Bose’s story reminds one of how the English wanted to erase his activities. Any attempts to show the white men in dark light was curbed at any cost not only by the English but also the Kala English. The question lying infront of us is whether the transfer of power from the British to the Indian Elite ( i.e., the kala english) had great costs to our country? Does the idea of Hindustan imagined by the leaders like Subhash have any place today? Or was the proverbial white man’s burden very much a mindset even after Independence? Is that why we lost our Netaji? Such questions began to haunt us during the session. Overall the talk was very informative and students had goosebumps after listening to the hard facts put forth by Anuj Dhar.

After the talk, Anuj Dhar interacted with the students of the university. He patiently answered all their queries.

Indic Academy immensely helped us in conducting this event in an academic space like the University of Hyderabad. We hope INDICA will continue to help us in conducting more such events in the future and succeed in their stated mission of inculcating Indic thought in young minds.