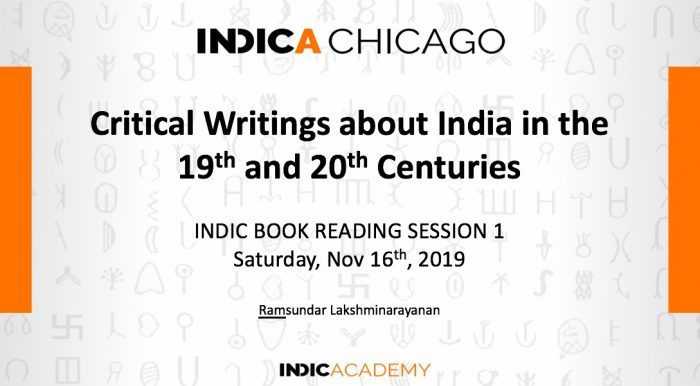 The topic for the first session was “Critical writings about India in the 19th and 20th centuries (during the colonial rule)”.  Ram Lakshminarayanan, INDICA Chicago Chapter Coordinator conducted the first session that was held for about 2 hours.

The reason the topic was chosen was two-fold:

“An essay on the best means of civilizing the subjects of British India and of diffusing the Christian Religion in the Eastern World” by John Mitchell (1805).

The session began with this essay – essentially a strategy document on how to destroy India’s culture, economy and society.

This essay was written by a Scottish Missionary named John Mitchell of University of Glasgow as a response to an “advertisement” by Rev. Claudius Buchanan, Vice-Provost of Fort-William College in Bengal in 1804 announcing a competition.  This essay won the first prize of £100.

This must be one of the earliest known SWOT analysis ever conducted.  John Mitchell adopted a very structured approach by performing a current state assessment, identifying improvement opportunities and recommending specific actions in line with the mandate.

At the outset, the missionary makes it very clear that the topic of “civilizing” the subjects and of diffusing “Christianity” must be seen in tandem.  That this smacks of racism and arrogance is a point that must not be missed.

The assessment is  extensive and includes many dimensions –  History, geography, agriculture practices, religious practices,  administrative changes,  need for political vigilance, dealing with external threats, co-opting native participation, improving education, improving revenue situation, survey of missionary activities of their predecessors – Dutch and Portuguese, an awareness of why Muslims failed in converting the masses, what should be done for conversion etc.

The next book that was discussed was Katherine Mayo’s 1927 book, deceptively titled, Mother India. This book became quite popular in the US and among Anglophiles who despised India and its culture. Mayo, an advocate for continuation of British Raj over India, was an American researcher, historian and white nationalist all rolled into one.  She traveled across India for five months and wrote Mother India with an ulterior motive- judge social customs, demonize practices and most importantly, tie them to Hindu culture.  A particularly egregious example of her writing is about Kali worship in Bengal.  She describes women drinking goat blood to conceive children and misquotes a worshiper sacrificing 100-200 kids on a daily basis!

The run-of-the-mill atrocity literature topics are all included in the book – child marriage, child prostitution, sati, status of women, sanitation habits of Indians and Brahmin bashing (a precursor to Brahmanical Patriarchy).

(Note: The 1957 Hindi Movie Mother India is a response/rebuttal to this book).

In response to Katherine Mayo’s Mother India, Dalip Singh Saund wrote an aptly titled book, My Mother India (1930), which became the third writing we explored. Dalip Singh Saund was an Indian American politician, and the first, to serve in US House of Representatives from 1957-1963. Pacific Coast Khalsa Diwan Society,  as an interpreter of Hindu culture and civilization felt obligated to respond and requested Saund to write the book.

Saund’s book countered Mayo’s propaganda by quoting Manu Smriti, Ramayana, Mahabharata, Vedas and Upanishads on the exalted status of women in the Indian society.  Saund compares the rights (voting) that were given to western women recently compared to the rights Indian women enjoyed historically. Saund clears the air on marriage customs and the part played by Islamic conquests and colonial rule in devolution of those customs.

Saund writes Indian civilization and ethics through the lens of history and quotes Max Muller,

“They never quarreled about their beliefs or asked any questions about individual faiths. Their only ambition was to acquire knowledge of the universe -of its origin and cause, and to understand the whence and whither, the who and what of the human soul”.

Saund quotes various from foreign traveler accounts that are written about India from ancient times to the colonial era.

The last writing of the session we explored was, Case for India by William Durant.  Durant’s work is widely known and publicized today.  Through Case for India Durant laid bare some of the brutal aspects of colonization and described economic and social destruction as “rape of the continent”.

He concludes by saying “England is not preparing India for self-government but bleeding it to death. Any man who sees this crime and does not speak out is a coward”

Through his work, he makes the case for India’s Independence from Britain.

Both Will Durant and Dalip Singh Saund highlight the same disastrous consequences; Social, Political and Economic destruction of India as a direct result of colonization.  Despite their narratives it was Katherine Mayo’s disparaging take that seemed to have captured the popular imagination. British mission to civilize the people of an ancient civilization sounds more like an irony now but sprouts of that idea still bother us on a grand scale.

Session 2 will be held on Saturday, Feb 15th between 3 and 5 pm. Duration may be extended. We will be reading from Dr Koenraad Elst’s book “Decolonizing the Hindu Mind”. 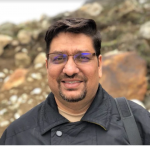 Nishant is the IA Chicago Chapter Coordinator and lives in Illinois USA with wife and two children. He has been associated with Indic Academy forRead more