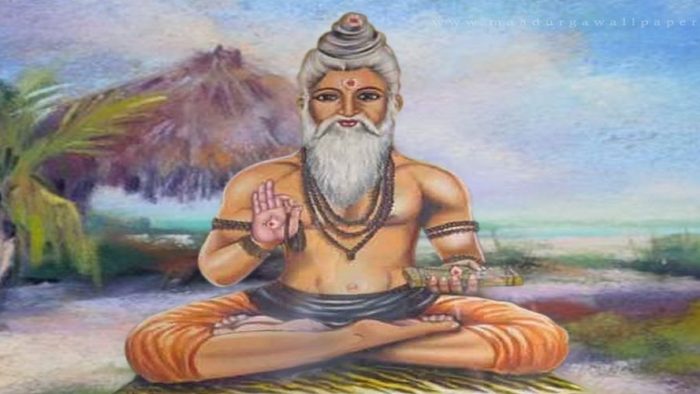 Indic Academy organised its annual Grateful2Gurus award ceremony across the nation, commemorating the exemplary contributions of authors, activists, academicians and artists of Sanatan Dharma among us today.

On 27th July 2018, Indica Madurai celebrated the selfless contributions of Prof Dr Rajagopal Vasudevan at the Thiagarajar College of Engineering. The event was organised on the auspicious occasion of Guru Purnima.

Prof Dr Rajagopal Vasudevan, popularly known as the “Plastic Man” of India, has developed a patent method to reuse plastic waste to construct roads. This ingenious technology provides for roads to be weather-resistant, have a greater life and withstand more load. Prof Vasudevan has selflessly handed over this patent technology to the Government of India at no cost. He currently serves as the Dean, Department of Chemistry at Thiagarajar College of Engineering, Madurai. 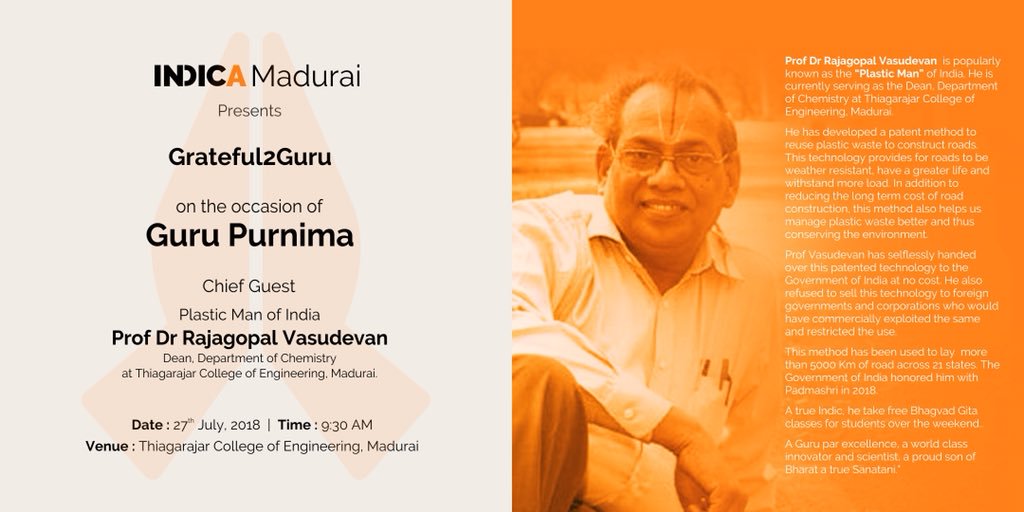 On the occasion of Guru Purnima, 27th July 2018, Indica Chennai organised the annual Grateful2Gurus award ceremony at the Parampara Hall in Alwarpet, Chennai. This year, two Gurus Dr Sadhana Rao and Prof Umadevi were felicitated at the ceremony followed by a heartwarming talk on “Centrality of the Guru in the Indic tradition” by Hema & DK Hari.

Dr Sadhana Rao, a practising doctor who has devoted herself to a lifetime of compassion, caring for abandoned, stolen and stray creatures that have suffered from humans uncaring and heartless acts. Today, her motherly hands embrace hundreds of cows, many buffalo, sheep, goats and dogs. 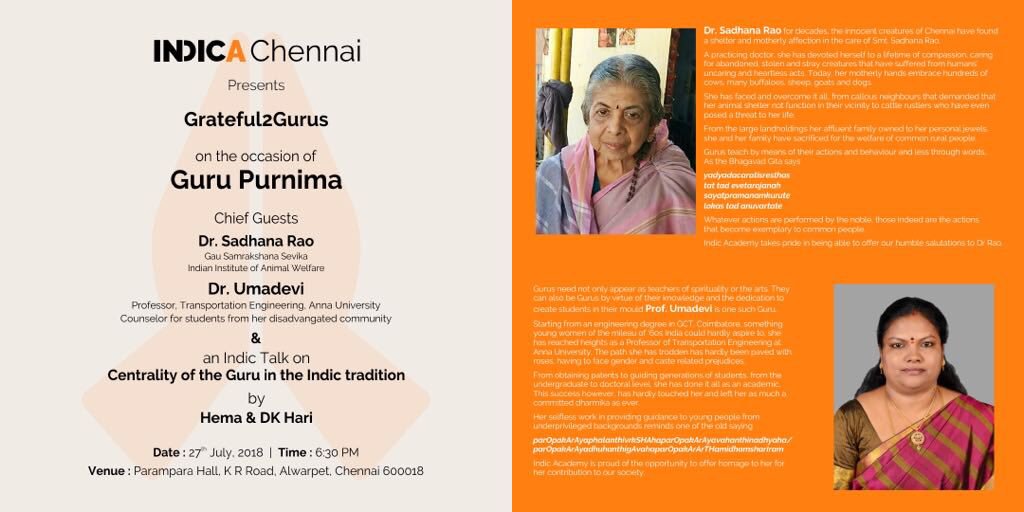 Prof Umadevi is an accomplished academician. She is a Professor of Transportation Engineering at Anna University. From obtaining patents to guiding generations of students from the undergraduate to doctoral level, Prof Umadevi has done it all as an academician.

Smt Saraswathi Jois is an internationally acclaimed practitioner and teacher of Yoga. She is the daughter of Shri K Pattabhi Jois (Guruji). She was the first female student to be granted admission to the Sanskrit College in Mysore where she studied both yoga and Sanskrit from Guruji. Saraswathi is a powerful female influence within the Jois family, bringing wisdom, experience and a feminine perspective to her teaching. Since Guruji’s passing in 2009 Saraswathi has dedicated herself to the continuation of his life’s work, sought after as an Ashtanga Yoga teacher throughout the world. 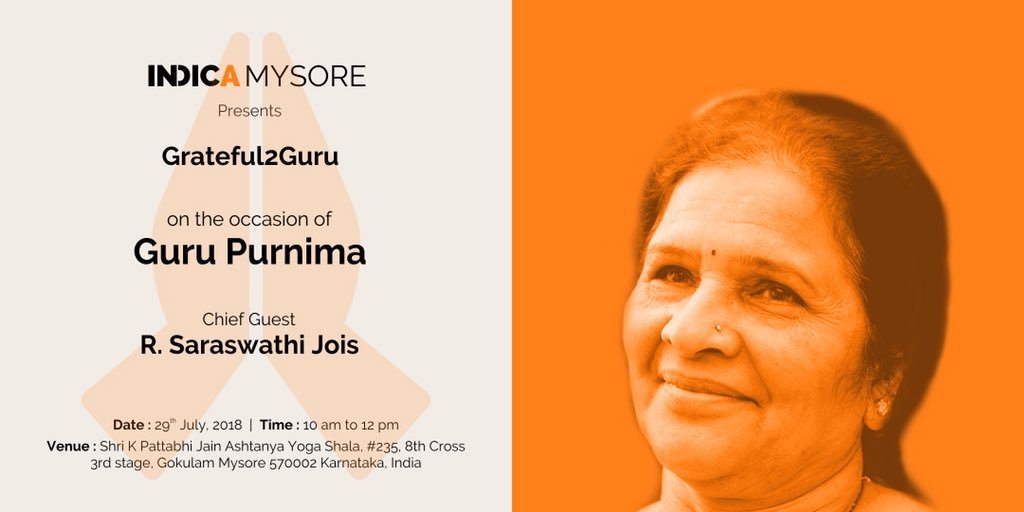 Prof Beena Sharma is an eminent academician and linguist who serves as the Registrar at Kendriya Hindi Sansthan, Agra. 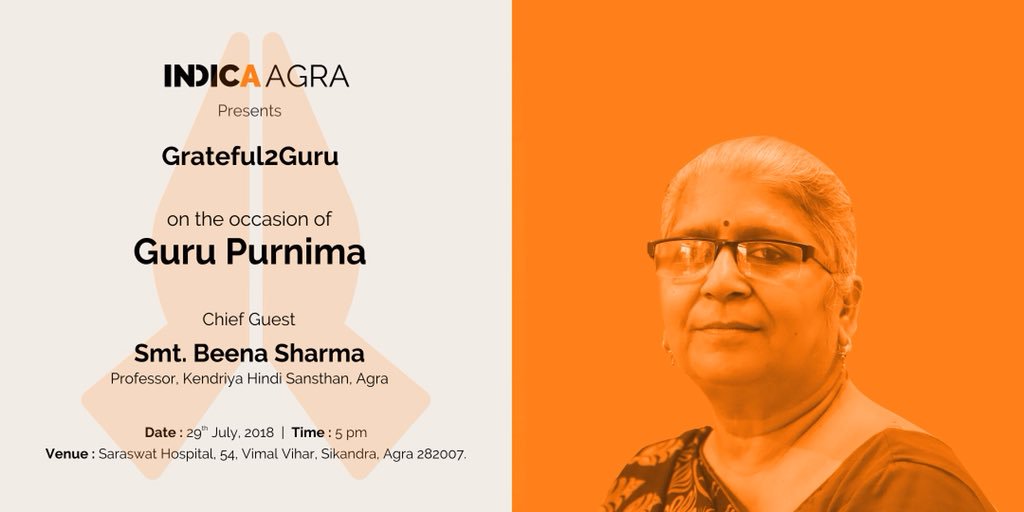 Shri Shatavadhani R Ganesh is a practitioner of the art of avadhana, a polyglot and an author in Sanskrit and Kannada. He is an extempore poet in multiple languages and has performed more than 1000 avadhanas in Kannada, Sanskrit, Telugu and Prakrit. He once set a record by composing poetry for twenty-four hours continuously. 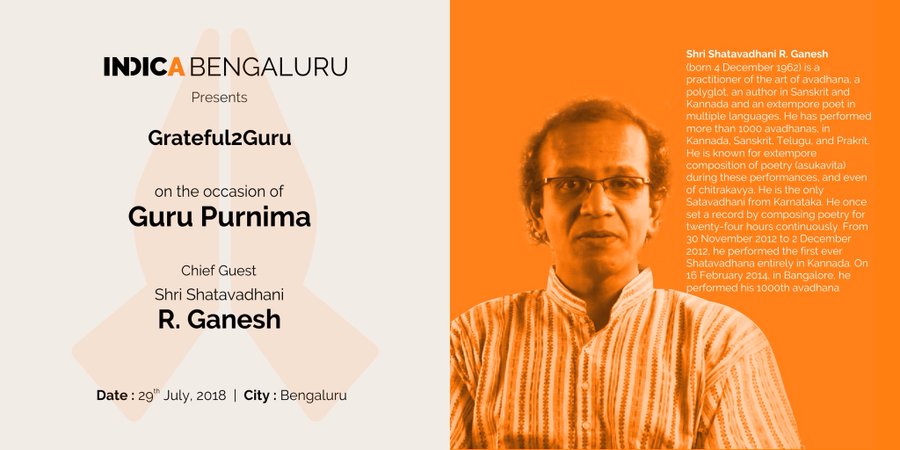 Dr K Subrahmanyam is an accomplished academician, writer, public speaker and administrator par excellence. Dr Subrahmanyam served as the Principal of the Vivekananda Gurukulam Institute at Thiruvedagam, Madurai and has authored over 20 books and 200 journal articles. He was bestowed with the “Vivekananda Award for Excellence” in propagating human values among the youth and was also awarded the title of “Parivrajakacharya” by the Vivekananda Vibhuti organisation in Hyderabad. 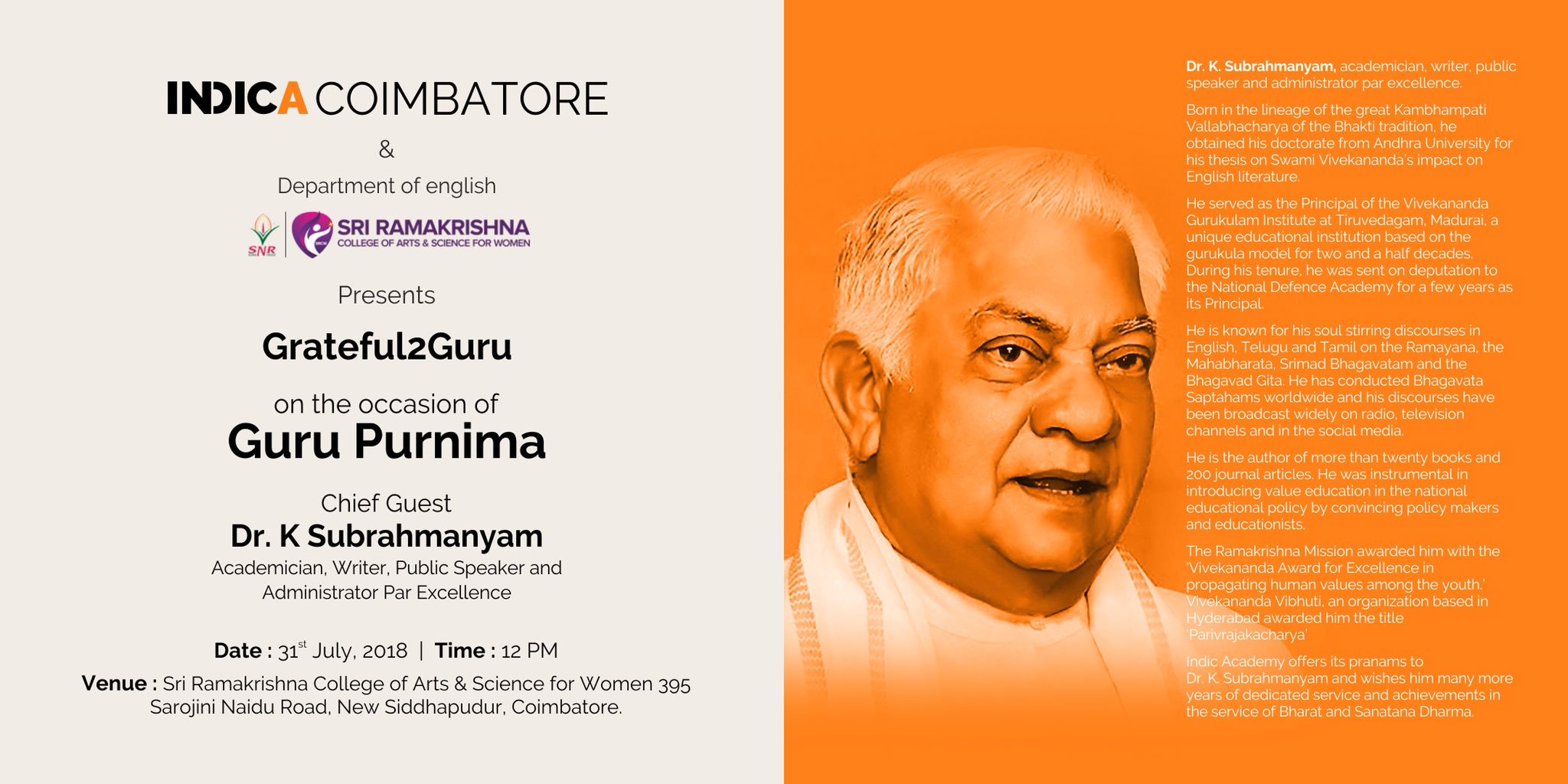 Smt Sonal Mansingh is an internationally acclaimed Indian classical dancer, author and Member of Parliament. She has been the recipient of several prestigious awards including the Padma Bhushan in 1992, Sangeet Natak Akademi Award in 1987 and was also conferred with the Padma Vibhushan, India’s second-highest civilian award in the year 2003. 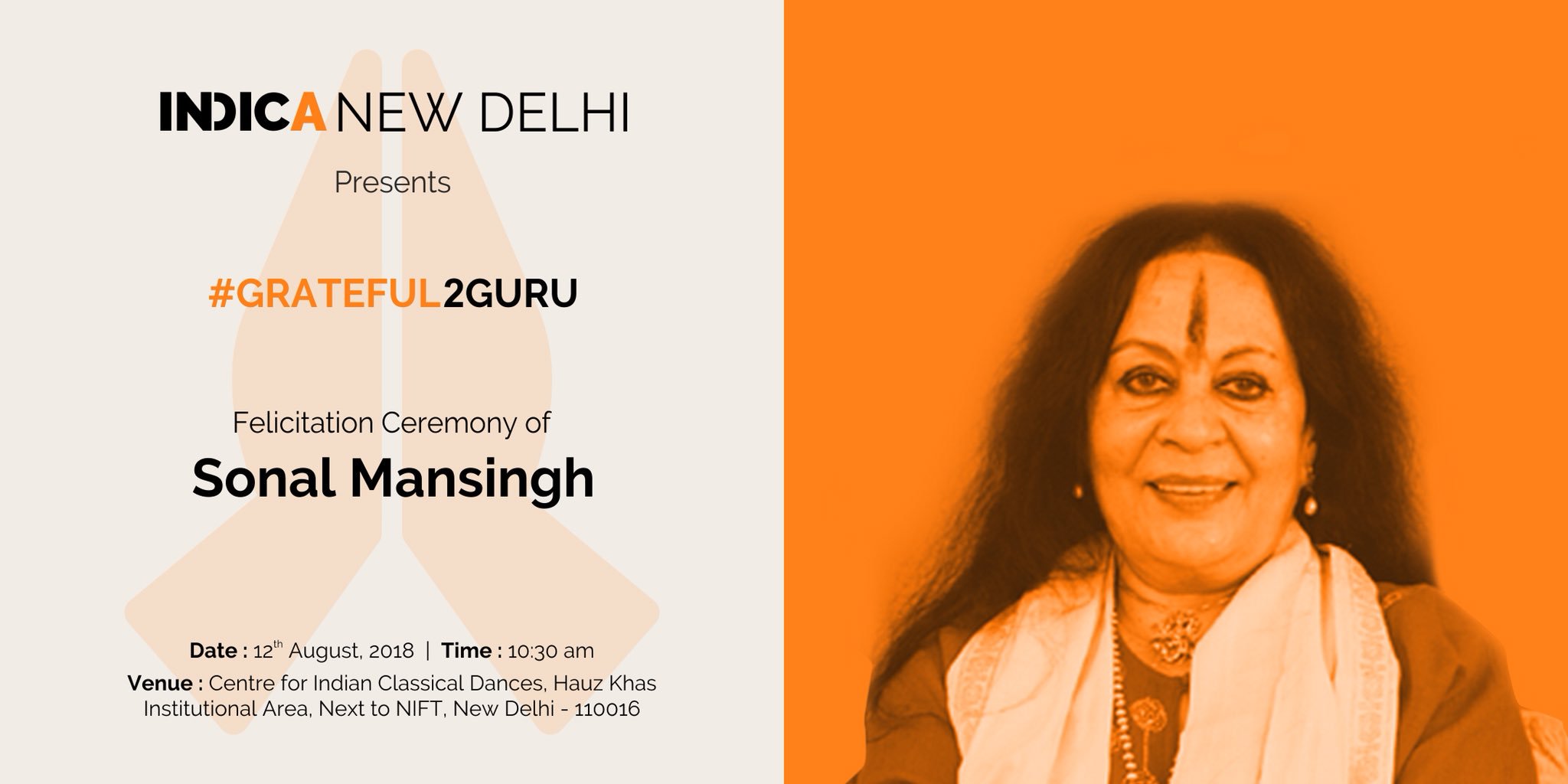 Dr P Kanagasabapathi is a professor, author and social activist known for his pioneering field studies in industrial and business clusters in different parts of the country. He served as the Director of the Tamil Nadu Institute of Urban Studies and is a member of the Indian Council of Social Science Research (ICSSR), New Delhi and its nominee in the Governing Body of the Madras Institute of Development Studies, Chennai. 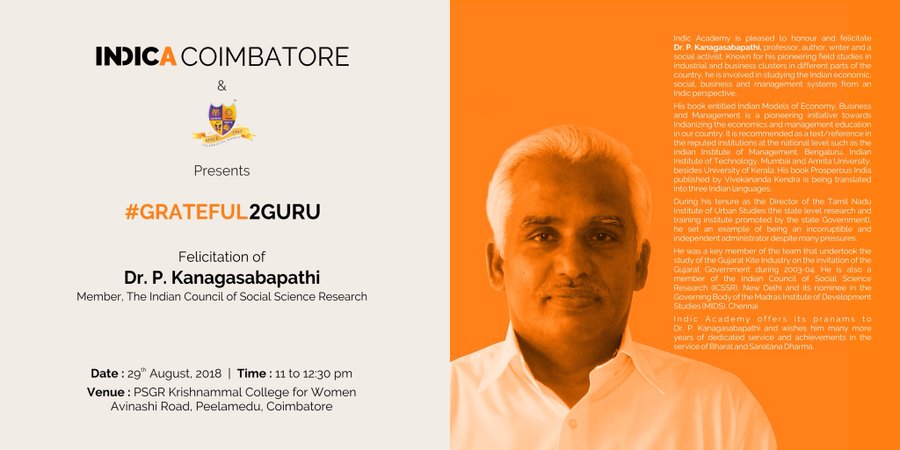