Conference On Oneness: A Report 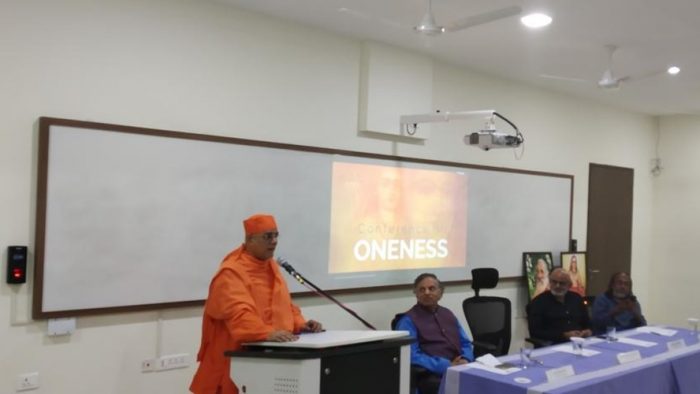 Sages, Scholars, and Seekers from across the country gathered at Veliyanad, Kochi- the sacred birthplace of Adi Shankaracharya (Aryamba’s maternal home) on October 15, 2019 for a three day mammoth ‘Conference on Oneness’ jointly organized by Indic Academy and Chinmaya Vishwavidyapeeth (CVV).

The inaugural ceremony started with a prayer followed by the ‘Welcome Address’ by Prof. Nagaraj Neerchal, Vice Chancellor, CVV. This was followed by an ‘Introductory Address’ by Dr. Nagaraj Paturi, Director IGUC, Indic Academy who shared about how the conference was conceptualized and how it makes important contributions to the field of Advaita Vedanta.

Prof. Srinivasa Varakhedi, Vice Chancellor, Kavi Kulaguru Kalidasa Sanskrit University was the Guest of Honour for the event and in his address he spoke about various ways one can think about ‘Oneness’ – as Aikyam, Abhedam, Tadatmya, and Advaitam! 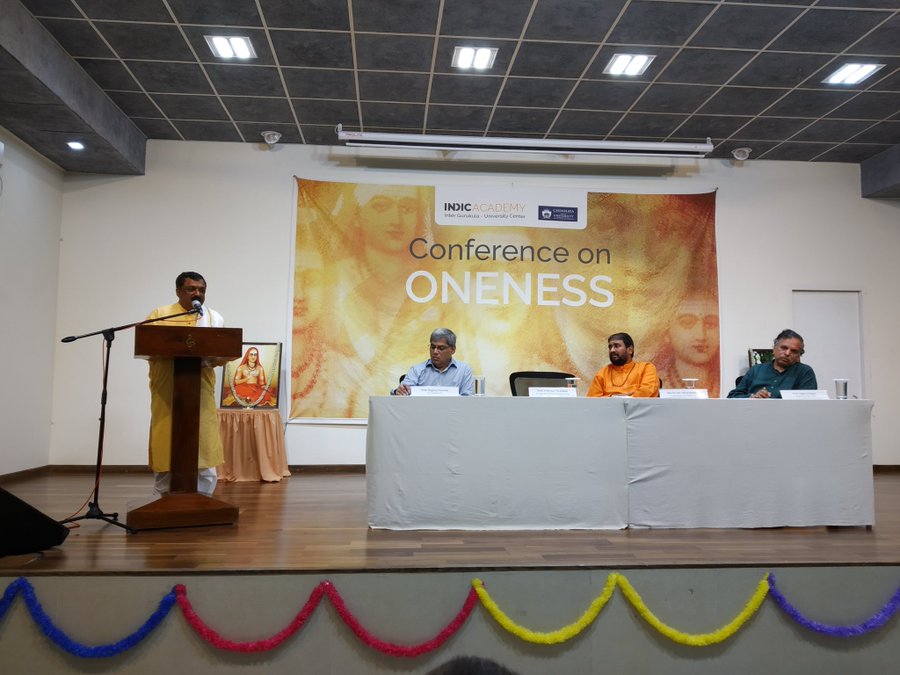 This was followed by the launch of Acharya Dr. Kuntimaddi Sadananda’s book ‘Journey Beyond: A Non-Dual Approach’ published in three volumes by Indic Academy. Acharya Sadananda is a Materials Scientist by profession and is a disciple of Swami Chinmayanandaji and a prominent teacher associated with Advaita Academy, one of the initiatives of Indic Academy. 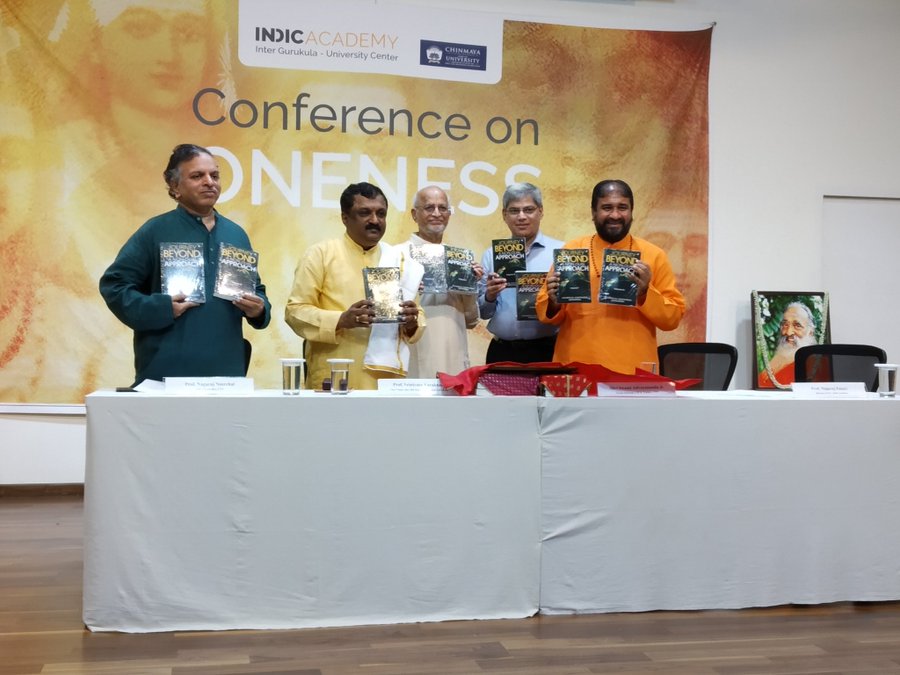 The book launch was followed by a ‘Keynote Address’ by Swami Advayananda, Chairman CVV. Swami Advayananda notes how Oneness is the fruit of Advaitic pursuit and such a pursuit integrates all the three streams of Karma, Bhakti, and Jnana. He further remarked that those who do not correctly understand Advaita, have problem with Advaita. Those who understand Advaita, they have problem with none. 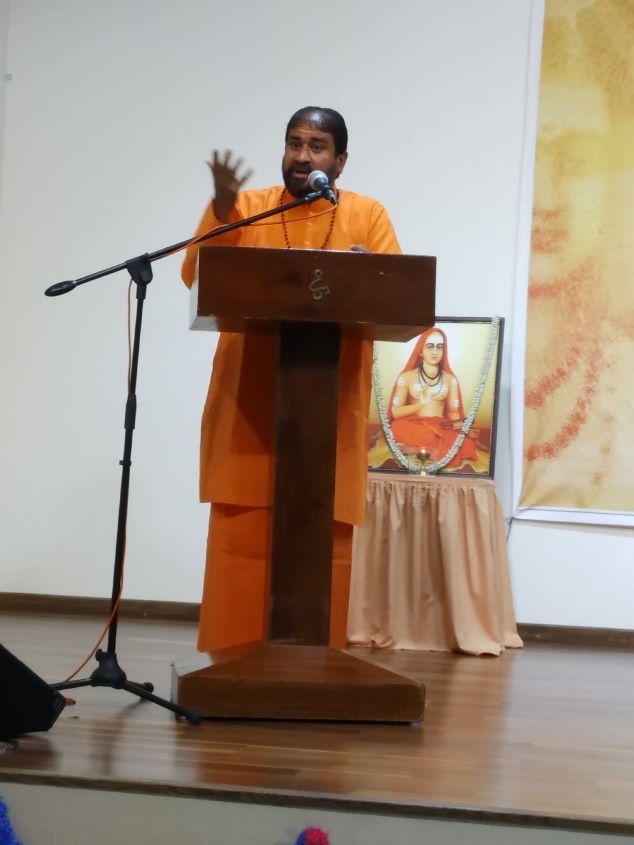 The inaugural session was followed by a session deliberating upon the textual contributions of Adi Shakaracharya. Titled ‘Retrospective of Shankara’s works’, the panel included presentations from renowned Vidwans and scholars like Sri Mani Dravid Sastrigal who spoke upon ‘Prasthana Traya Bhashya’, Prof. Madhusudan Penna who presented on the Prakarana Granthas, Dr. Nagaraj Paturi who enunciated on the Jnaanaabhyaasa Stutis and Swami Sharadananda who shed light upon the Bhakti Stutis of Adi Shankaracharya. 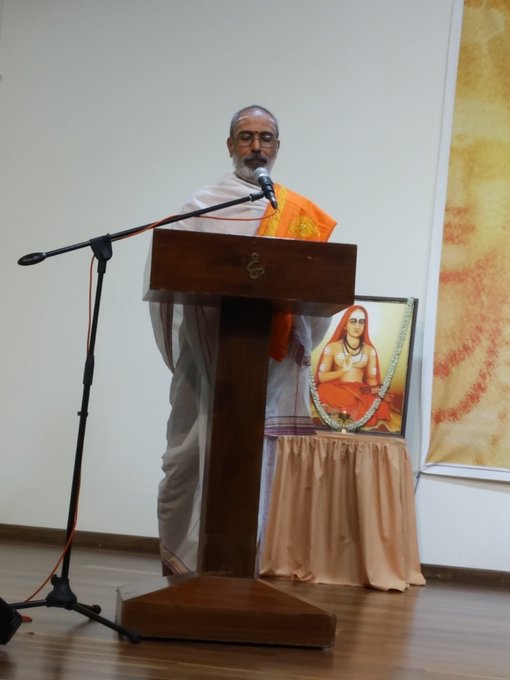 After the session on works of Adi Shankaracharya, two parallel sessions were held –One discussing the ‘Conceptual Issues’ in Advaita Vedanta, and the other exploring ‘Advaita in Leadership, Science & Sustainability’. The former was moderated by Sri Korada Subrahmanyam and many interesting papers like ‘Sayanacharyam’ by Swami Vedarthananda, ‘Advaita in Vakyapadiyam’ by Swami Japasiddhananda, and ‘Ambiguity and its Resolution’ by Dr. Tulasi Kumar Joshi were presented. The latter session included papers like ‘Indic Leadership’ by Prof. B. Mahadevan, ‘Science & Advaita’ by Kuntimaddi Sadananda, and ‘Oneness Management Strategy’ by Dr. Vinod R. R. & Dr. M. Satish. 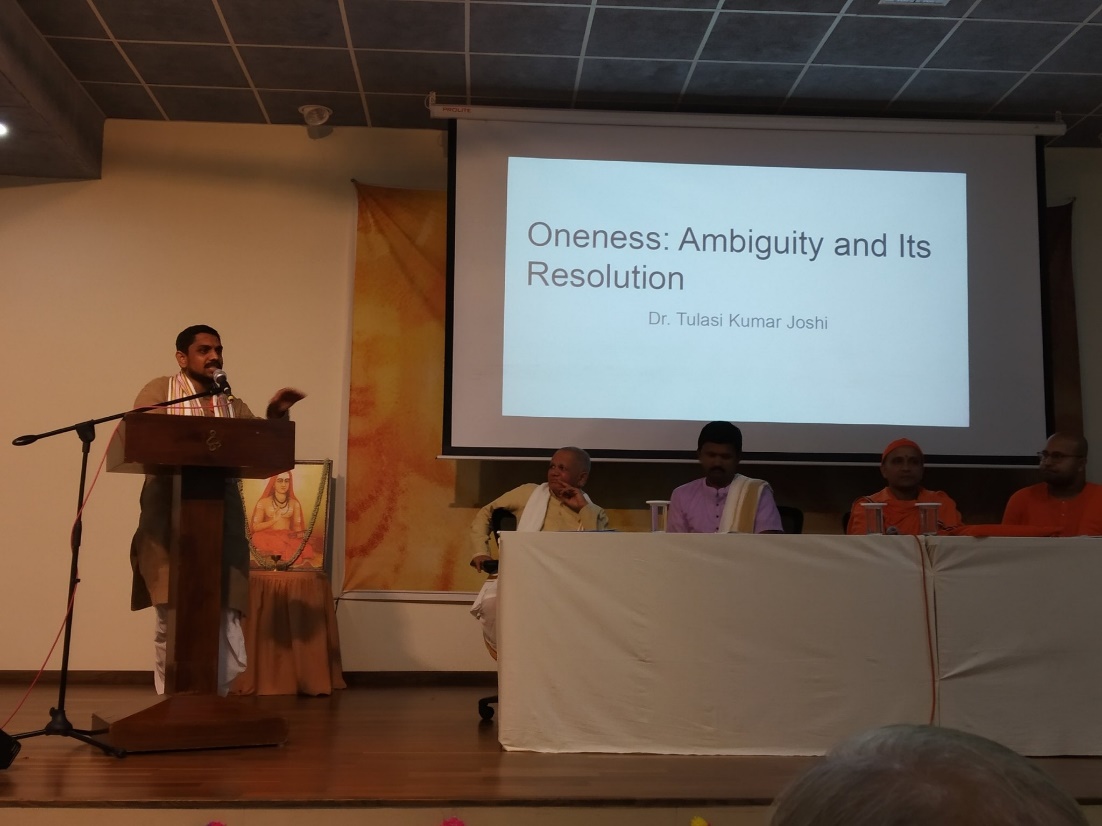 The afternoon session was dedicated to ‘Vaakyaartha Sadas’- a traditional way of conducting Vada or scholarly discussions in Sanskrit on a particular topic going back to many centuries. The Sadas was chaired by Sri Mani Dravid Shastrigal and senior Vidwan Sri Ramakrishna Bhatt was the Special guest. The Sadas included a deliberation on topics like ‘Kutasthaatman’ by Sri Ganesheshwar Bhatt, ‘Aikyaavarodha in Dva Suparna Mantra of Veda’ by Sri Maheswaran KS, and ‘Shabdaadvaita’ by Sri Ganeshwar Nath Jha among others. 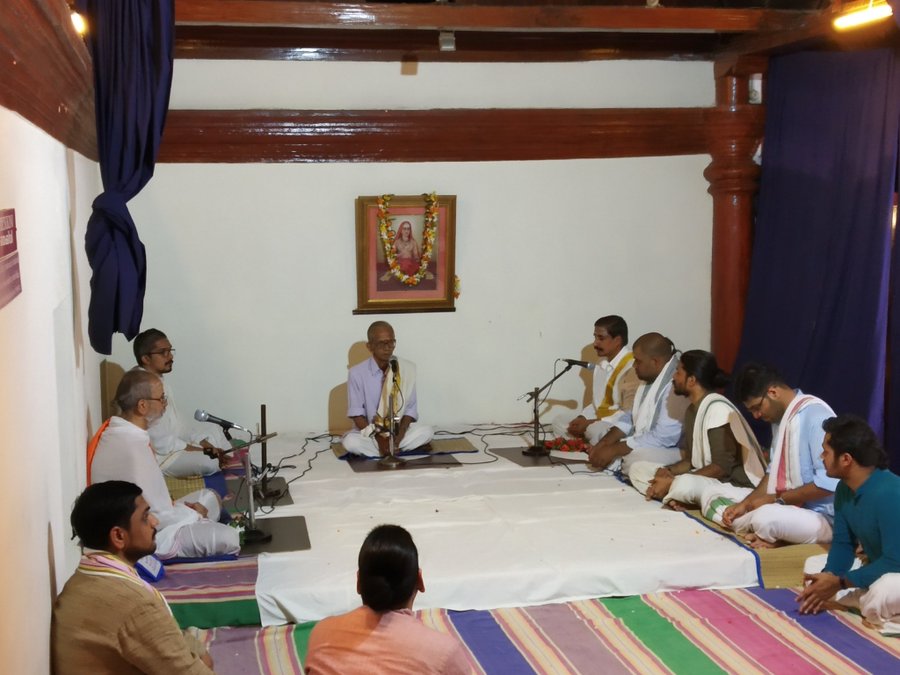 The day began with a session of ‘Advaita and Yoga’ with participants presenting papers on issues ranging from Advaita in the Srividya tradition to Advaitic ideas in the Grihya rituals. The paper exploring ‘Yoga, Advaita and Srividya’ was presented by Dr. Shilpa Ashok Pandit. Dr. Karanam Aravinda Rao presented on ‘Non-Duality and Multitude of Rituals’. Other presenters included Srinivas Jammalamadaka (On Pranayama), Love Kumar Sharma (On Siva Samhita), and Dr. S. Ramaratnam (On Grihya rituals). 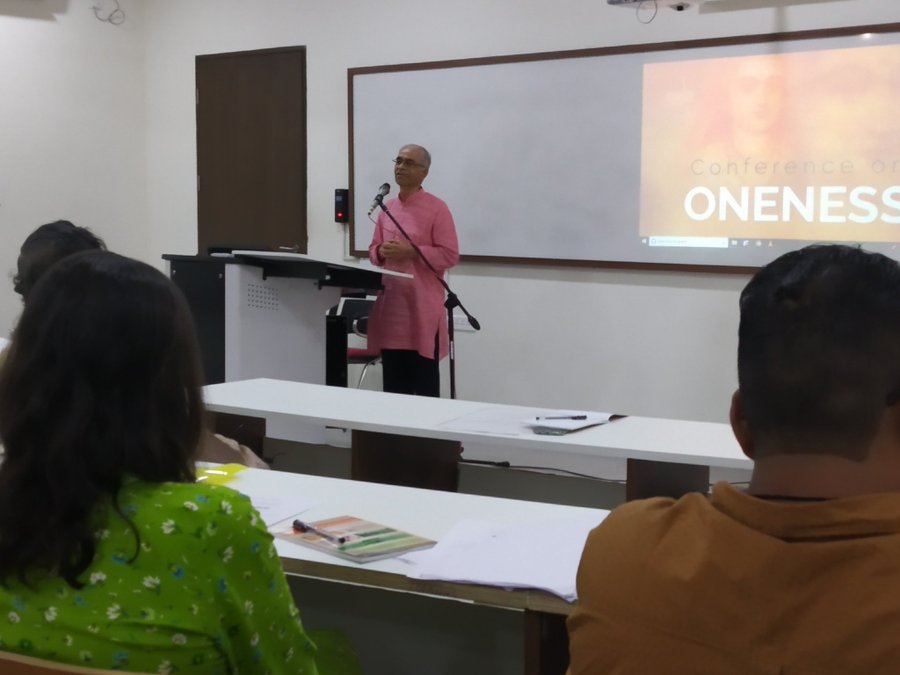 This was followed by two parallel sessions, one rare and unpublished books on Advaita Vedanta and the other on ‘Variants of Advaita’. The former included a presentation on texts like Tattvaanusandhaanam of Mahadevananda Saraswati (by Dr. V. Yamuna Devi), Advaita Makaranda of Sri Lakshmidharakavi (by Dr. Sita Sundar Ram), and Gitamritamahodadhi of R. Visvanatha Sastri (by Mrs. Lavanya V. Eswar), among others. In the latter session, variants of Advaita like Shuddhaadvaita (by Ms. Bhairavi Parag Ashar), Vishishtadvaita (two presentations by Dr. Gopala Desikan and Dr. L. Sampath Kumar), and Saivasiddhanta (by Sri T. Ganesan). 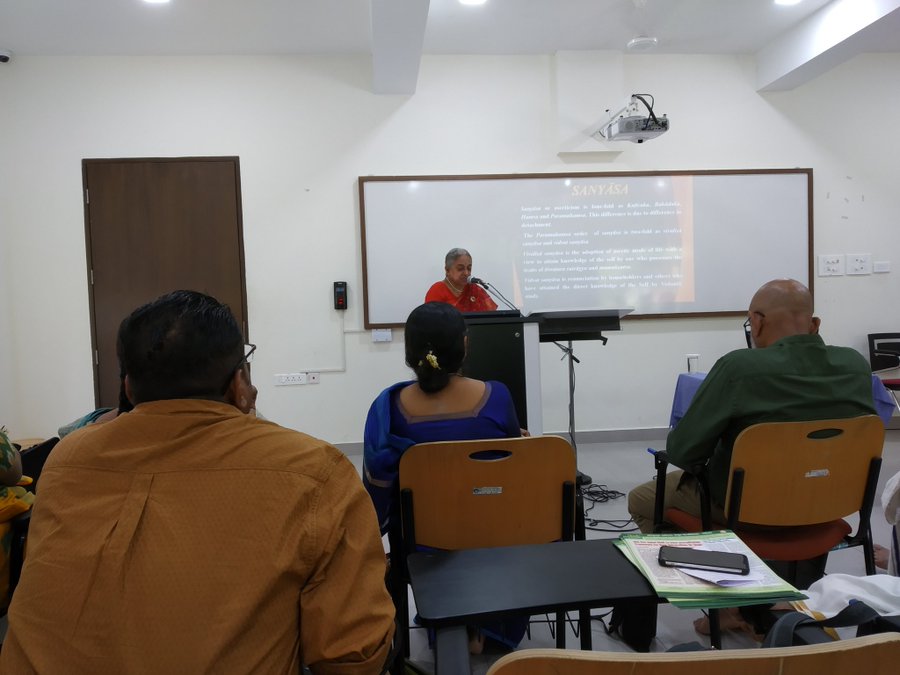 The afternoon session was dedicated to exploring ‘Advaita in Arts, Music & Dance’. The session was moderated by Dr. Bharat Gupt who also spoke on ‘Natyashastra & Vedanta’. The papers that were presented included themes like ‘Tantra and Sangita’ by Ms. Mridula Ashwin, ‘Advaita Vedantic Undertones in Haryanvi Raginis’ by Sri Priyank Kumar Chauhan, ‘Ideas of Advaita Vedanta in the Sarvajna Tripadis’ by Nithin Sridhar, ‘Advaitic Kritis composed by Swami Dayananda Saraswati’ by Ms. Sonali Ambasankar, and ‘Expression of Advaita through Khayal compositions of Hindustani Music’ by Sri Swapnil Chaphekar among others. 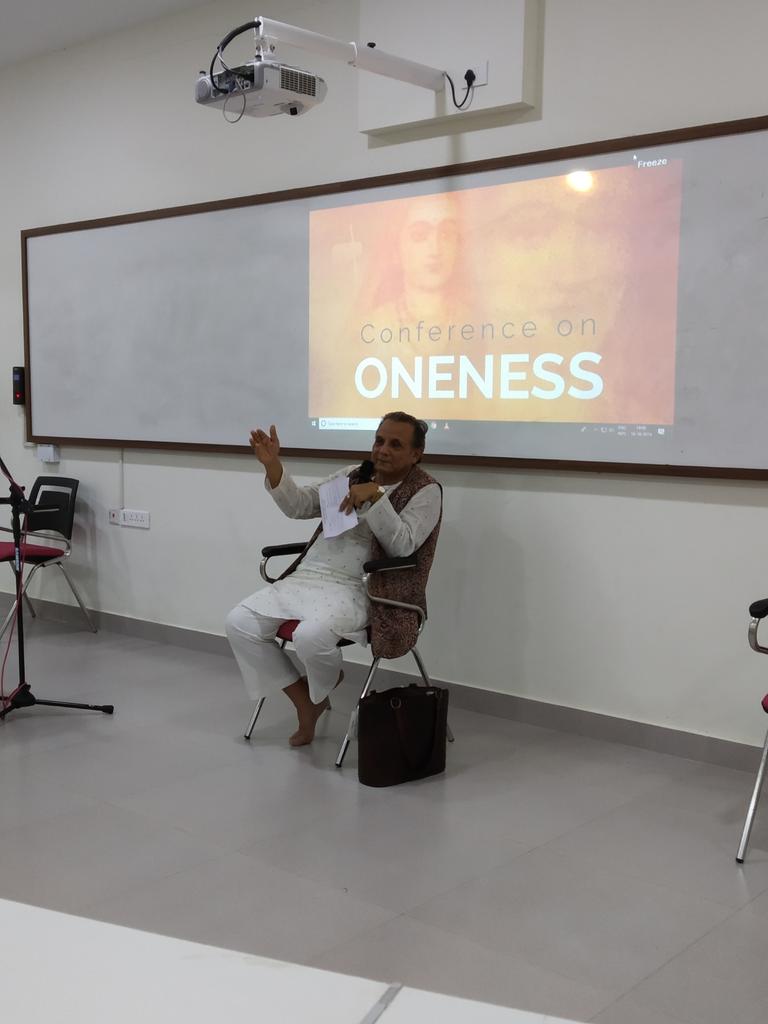 The day started with an online presentation by Dr. Vishwa Adluri on ‘Advaita in Mahabharata’. This was followed by a session on ‘Contemporary Gurus of Advaita’ wherein participants spoke on Ramana Maharshi (two presentations by Dr. P. Vamadeva Sastry and Dr. Sethuraman Rammohan), Swami Sacchidanandendra Saraswati (by Sri Ravishankar Bhat K. S), Swami Chinmayananda (by Dr. Arundhati Sundar & Sri N. M. Sundar in a joint presentation & by Swamini Brahmaprajnananda Saraswati in a separate presentation), Swami Dayananda (by Swami Brahmavidananda Saraswati), Vivekananda (by Kanchan Gogate), and Narayana Guru (by Sri Sooraj Rajendran). There was a also a presentation critiquing the work of Prof. Rambachan on Vivekananda by Sri Vinay HA. A session on rare books of Advaita Vedanta was also held in parallel. 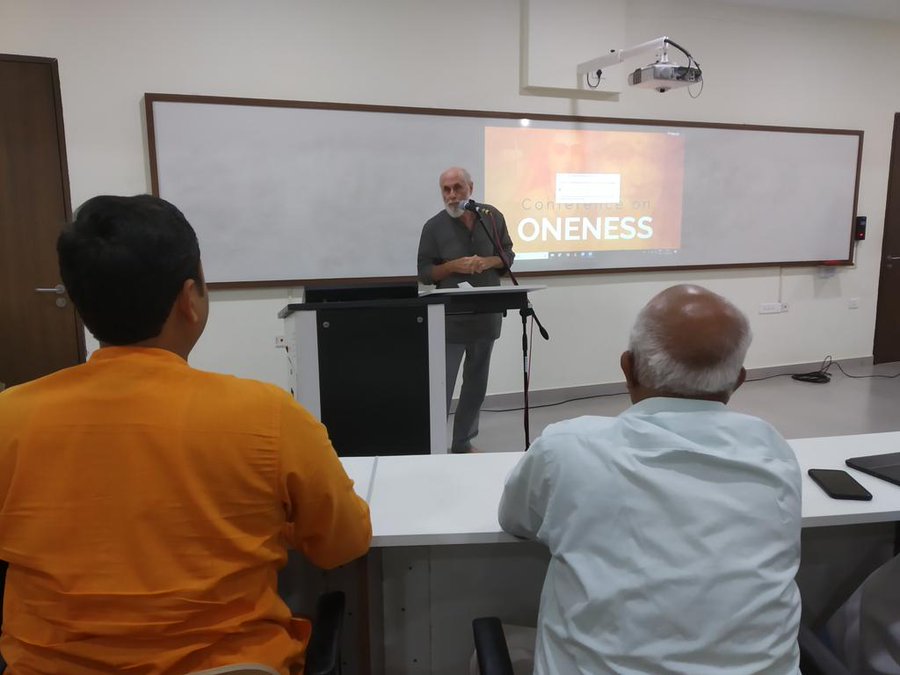 Post-lunch, Sri G. Kameshwar and Sri Hampiholi Narasimha Sastry presented their papers on Atma Vidya in Adhyatma Ramayana and Advaita in Bhagavatam, respectively in a session dedicated to exploring ‘Advaita in Itihasas and Puranas’. 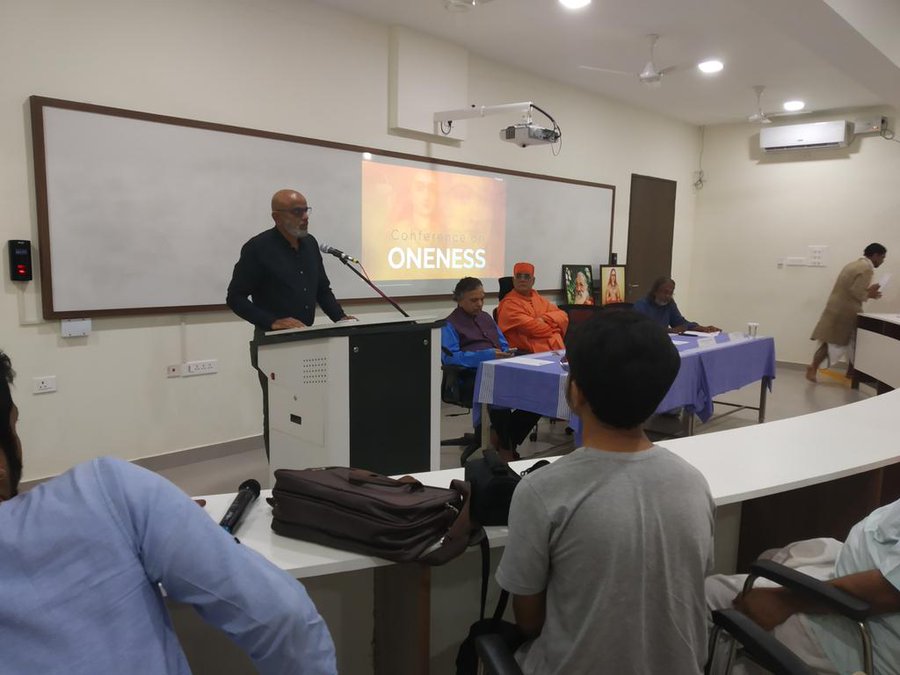 Dr. Nagaraj Paturi also addressed the audience and presented a review and summary of the conference proceedings. 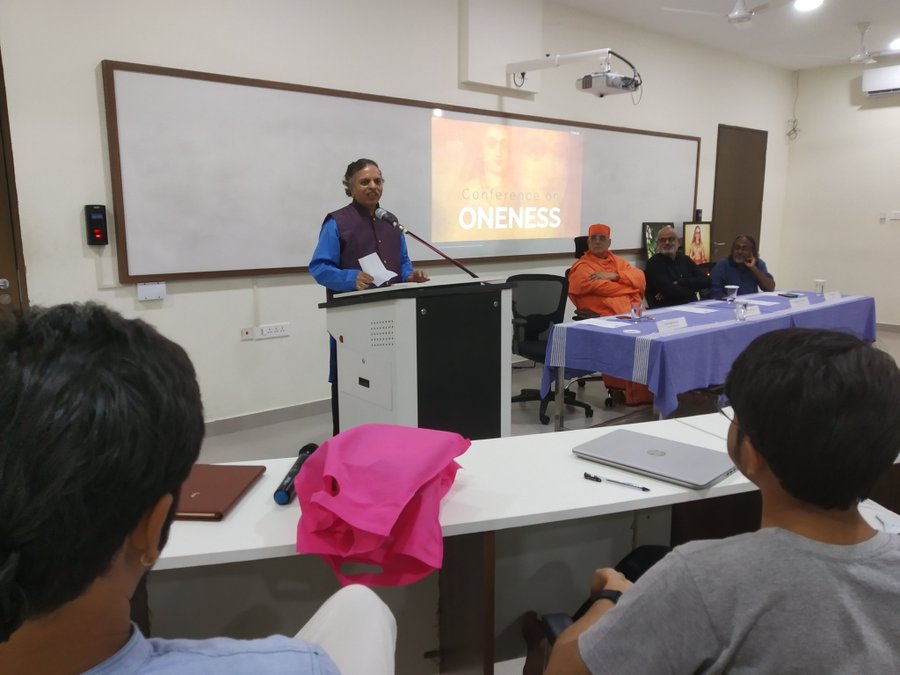 The Conference concluded with a ‘Vote of Thanks’ by Sri N. M. Sundar, Trustee, CIF. The three-days exposed the participants to different aspects of Advaita Vedanta and helped them to immerse themselves in the beauty and wisdom of Indic Civilizational Knowledge. During the evenings, Classical music and dance performances were organized as well. Participants also got the unique opportunity to study the Vedantic text ‘Laghu-Vakya-Vrutti’ of Adi Shankaracharya under Swami Advayananda.