Conference On Oneness – A Call For Papers 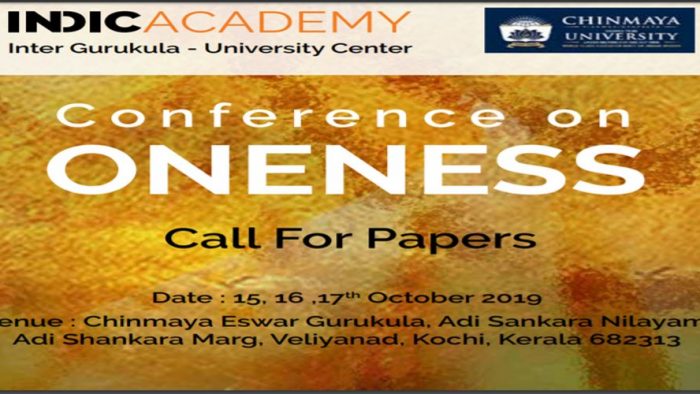 Indic Academy’s Inter Gurukula – University Center presents a conference on Oneness discussing the role of Advaita in the contemporary world by sages & scholars.

Oneness is most sought after in the variously divided contemporary world. The thought and practice that contributed and has potential to contribute further to oneness is Advaita or Non- Dualism.

Adi Sankara, the fountain-head of the spread of the Advaita school of Vedanta is a great integrator. He integrated the two branches of Meemamsa, the discipline of Vedic hermeneutics, the Dharma (order)-oriented or the Karma (action/ritual)-oriented branch called Poorva Meemamsa or Meemamsa in short with the Moksha(liberation)-oriented branch Uttara Meemamsa or Vedanta in short through his endeavour to revive and save the latter from the submerging dominance of the former.

His key philosophy of unity of the four key concepts of Vedanta : Jeeva – the individual self, Eeswara -the all-controlling principle, Brahman – the Cosmic essence and Jagat – the world, which is what is called as Advaita, is again a form of integration.

His commentaries to the Upanishads, Brahmasutras and the Bhagavadgita, selecting them as the three major sources of Vedanta lead to the grouping of the three as Prasthanatraya. This grouping was followed by all the acharyas of different schools of Vedanta, including the acharyas of the schools that differed with him with regard to his fundamentals such as the unity of Jeeva, Eeswara, Brahman and Jagat.

From the foundations laid by him, acharyas of his lineage developed the concept of levels of truth /existence in which Jagat, the world that was believed by the other schools to have been viewed as nontruth, false or illusion in Advaita was explained as not a nontruth or false but a certain level/aspect of truth, a special case of the ultimate truth, a result of application of certain parameters to the ultimate truth. Taking help of the seed ideas provided by him, , these acharyas showed that in the framework of Advaita, even the positions of the other schools of Vedanta negating the position of Advaita are not negated but are viewed as relatively valid positions forming special cases of the position of Advaita.

His founding of four Peethas (Dharma leadership centers) in four different corners of the vast Indic geo-cultural landscape is viewed as a project of geo-cultural unity. Sthalapuranas , the sacred place legends of a huge number of shrines of various deities including those in the remotest corners across the length and breadth of the country mention Adi Sankara as the rejuvenator of the shrine, another evidence of his role in the geo-cultural unity of the Indic landscape.

He organized various ascetic traditions and mystic practices into a coherent tradition of ascetic mystic life-style.

Advaita or non-dualism as a school of Vedanta has been widely discussed in contemporary academic writings and gatherings. Advaita is not just an academic topic, it is a practice followed by spiritual seekers, guided by sages. Indic Academy would like to highlight this by bringing all these three categories of the Advaita-practitioners involved, on to the same platform, through this conference.

The conference shall focus on the following ten broad themes. We invite Scholars & Sages to present papers on:

Advaita, has several different strands within and outside the Sankara tradition. Outside the Sankara tradition, certain thought-practice traditions have names of Advaita with a qualifying word such as Siva Advaita, Suddha Advaita, Visishta Advaita, Sakti Visishta Advaita etc. Certain others like Sabdabrahma vaada, Pratyabhijna vaada which is genealogically related to the Sabdabrahma vaada itself have conceptual similitude to Advaita. Several traditional spiritual lineages such as the Natha lineage, Dattatreya or Avadhoota lineage have Advaita as their foundational principle. Within the Sankara tradition too there are several different sub- traditions differing in some minor details.

We invite papers discussing the relationship, connections, similarities and differences , agreements and disagreements, continuities and discontinuities among all these , particularly in relation to Sankara Advaita.

2. Contemporary gurus of Advaita and their contribution

Starting from Swami Vivekananda of the 19th century, many gurus and leaders of the 19th and 20th centuries, including some who travelled abroad and influenced from there and some who stayed back in India and wielded global influence have been followers of /subscribers to Advaita, most of them hailed from the traditional guru-lineage of Advaita. Some like Sri Ramana Maharshi emerged as gurus by themselves and stood as a proof of possibility of Jeevanmukta in contemporary times. All these contemporary gurus of various strands articulated Advaita in a contemporary idiom. They created multiple contemporary flavors of Advaita. Many of them brought out contemporary applications of Advaita in Psychology and Personality Development, Social Change and Development, Political , Economic and Environmental thinking etc.

We invite papers covering these contemporary gurus, their multiple flavours and their contemporaneity, agreements and disagreements if any and continuities and discontinuities if any with a special focus on their impact on the Indian and global society.

3. Dasanami and other non-dualist ascetic traditions

Dashanami Sanyasi is a monastic tradition of “single-staff renunciation” ēka daṇḍi sannyāsi generally associated with the Advaita Vedanta tradition. The disciples of Adi Shankaracharya are also called “Dash Nam Sanyasi” as the title is further divided into ten groups viz. Giri, Puri, Bharati, Ban, Aranya, Sagar, Aashram, Saraswati, Tirtha, and Parwat. Dashnam Sanyasins are associated mainly with the four Maths in four corners of India, established by Adi Shankaracharya. Initially all the disciples were Sanyasins who embraced sanyas either after marriage or without getting married. According to the tradition in Kerala, after Shankara’s samadhi at Vadakkunnathan Temple, his disciples founded four maṭhas in Thrissur, namely Naduvil Madhom, Thekke Madhom, Idayil Madhom and Vadakke Madhom. The ēkadaṇḍis or Dasanāmis had established monasteries in India and Nepal. The tradition of Naga sadhus who are prominent at Kumbh mela, who are also viewed as warrior-ascetics is believed by the Naga sadhus to have been created by Adi Shankara and is part of the Dasanami related ascetic tradition.

We invite paper discussing such ascetic traditions of Advaita.

One of the characteristic aspects of Indian culture is profound spiritual knowledge among the masses and various groups at the grassroots level and its expression in their lore in various forms such as folk songs, metaphors, idioms and proverbs. Advaita and its key concepts such as Maya form part of such lore across the length and breadth of the Indian sub-continent. This makes such vocabulary part of mass dialects of various regional languages of India irrespective of whether the words are used by the spiritually enlightened or not. Yogic and other mystic spiritual traditions spread unto the remotest corners of the land , through a repertoire of mystic songs sung to deeply touching tunes deeply anchored in Advaitic ideas. These groups with their own saints and gurus hailing from many variegated traditions with complex and amorphous allegiances to traditions such as Natha, Siddha etc. show the spread of Advaitic thought and practice among the people viewed as ‘paamara’, ‘unrefined’, ‘raw’ masses.

5. Expression of Advaita through Classical Music and Dance

Classical arts particularly classical music and classical dance in India are known for their deep rootedness in spirituality. The lyrics sung and danced to in these traditions are composed by Vaaggeyakaaras , i.e., the poet-musicians who composed music to their poetic compositions themselves and sang them with strong classical rigor. These vaaggeyakaaras invariably were saintly persons with life-style engrossed in spiritual practice. Incidentally many of these fountain-heads of classical music and dance compositions are Advaitins. As such, the lyrics of these vaaggeyakaaras such as MuttuSwami Dikshitar, Shyama Shastri, Swati Tirunal, Tyagaraja , Munipalle Subrahmanya Kavi etc. are all Advaitic in content. Particularly Tyagaraja among these is specially interesting because of his Naadabramhopaasana strand of Advaita. Naadabrahmaadvaita is not just the content of his lyrics, it is his path for spiritual attainment. Sadasivabrahmendra is another Vaaggeyakaara, but a highly special one at that as he comes from the lineage of a Sankaracharya Peetha, is a Sankaraacharya himself and a Sanskrit vaaggeyakaara , a scholarly mystic and mystic scholar, a classical among the folk poet-singers and a folkish one among the classical poet-singers. The number of these Classical music –dance vaaggeyakaaras may run into a few hundred if we count all those who enriched the Bhajana tradition from an Advaitic background.

We invite papers discussing Advaita in classical music and dance.

6. Itihasas and Puranas and Advaita

In the body of literature comprising of Itihasas such as Ramayana and Mahabharata, 18 Mahapuranas including Mahabhagavata and numerous upapuranas that has been called as panchama Veda, i.e., the fifth Veda and has been intended to be a masses-friendly version of the content of the Vedas, while there are occasions in some of these books where there is an explicit Advaitic expression, there have been a good number of commentaries of at least the major works among them clearly from an Advaitic perspective. For example, books called Rahasya Prakasa e.g. Mahabharata Rahasya Prakasa , Bhagavata Rahasya Prakasa Ramayana Rahasya Prakasa which gave esoteric interpretation to the narratives in these books, quite often gave an Advaitic interpretation to these narratives. Books like Yoga Vasishtha , Sitaramanjaneya samvaadam take the Ramayana narrative and turn them into books of spiritual practice with Yoga and Vedanta content. Sridhara Swami gives an Advaita commentary to Mahabhagavata. Santa Rasa discussions of Ananda Vardhana and Abhinava gupta are non-dualist in nature. Madhusudana Saraswati argues for Bhakti as Rasa keeping Bhagavata as the central lakshya.

We invite papers on Advaitic interpretation of Itihasas and Puranas.

7. Advaita and shrouta, Agamic, Tantric and other ritual practices

One of the most interesting issues sometimes made out to be contentious regarding Advaita is the participation of Advaita practitioners in rituals of Shrouta and Smaarta categories, pancha maha yajnas at home, temple worship and other temple related aagamic rituals, Sri Vidyopasana and different tantra related rituals. Sankara and his Advaita for some reason have been stereotyped to be some kind of an iconoclast tradition strictly opposed to anything other than sannyasa in which sannyasis are not supposed to perform pujas, are not supposed to support or participate in yajnas, are not supposed to participate in Agamic rituals such as kumbhabhishekams etc. Interestingly dvijas following Sankara Advaita are called Smarta people, Smriti-followers. In many Sankara mathas Srichakra puja and other pujas are performed by the Peethadhipati Swamis. Many Sankara Advaita practitioners are Sri Vidyopasakas and some practice different kinds of Tantra too.

We invite papers discussing the justification for such combinations.

8. Advaita in Yoga and other inner-world practices

There are books explaining close connection between Hatha Yoga practice and Advaita. A very good example of a typical Advaitic kriya is Soham kriya or Ajapa japa or Ajapa Yoga. This breathing Yoga practice is once again popular during modern times. Many other such secret Yoga practices as Taraka Raja Yoga which are essentially Advaitic are gaining currency among spiritual practitioners today.

We invite papers on such Yogic practices.

With advancements in science, there is a new understanding that is taking human knowledge closer towards oneness of everything. Boundaries between aspects of reality or gradually collapsing each aspect being proved to be another form of the other. Boundaries between matter and energy, space and time, wave and particle, life and non-life all pairs are being viewed as continua. Work towards a unified field is progressing. Consciousness studies and the natural sciences are merging into each other. These developments are encouraging people to take up science based studies of Non-dualism.

We invite papers on Science and Non Dualism

As per the anthology of Advaita by Sri Thangaswamy there are several sages who have written works on Advaita post Shankara. A number of these works have not been discussed or researched upon.

We invite papers on lesser known works of Advaita