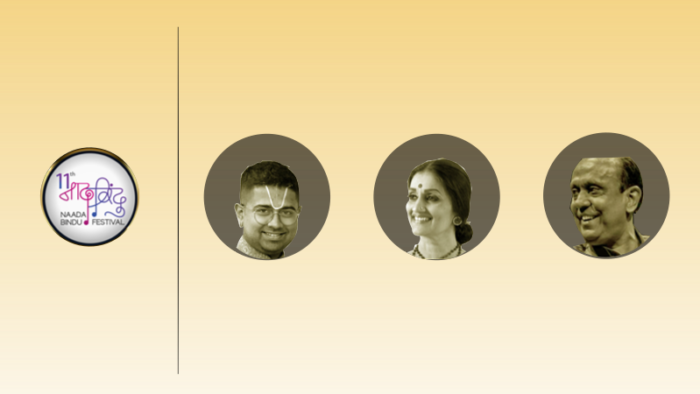 Below are excerpts from 3 commissioned talks titled Kala Drishti, conducted online at the 11th Naada Bindu Festival (NBF). These talks were graciously supported by Indic Academy, mention of which has been made on the ‘Support Us’ page of the NBF Website.

Shri Dushyant Sridhar, renowned public speaker and the author of the critically-acclaimed best-seller, “Vedanta Desika,” began his Art Talk with a prayer, offering salutations to Valmikiji, the author of the Ramayana.

The word Rasa means essence or sentiment. Although ancient manuscripts mention eight Rasas, the ninth, Shanta rasa is an addendum.

While Dushyantji elaborated on each Rasa with various examples and references from the Valmiki Ramayana, a few of them are enumerated below.

The first sentiment is Shringara Rasa, or romantic love. This has two variants, one observed when the lovers are together and the other, when they are apart. This rasa is most evident in the love between Rama and Sita. Rama declares that being with Sita in exile is worth more than his kingdom. The viraha tapam is also on display in his grief at being separated from his beloved.

There are many instances where Hanumanji provides the Hasya Rasa or comic relief to the serious quest of finding Sita. When Shurpanaka asks Lakshmana to marry her, he jokingly responds by asking her if she was willing to share the burden of being a servant to Rama and Sita.

The Karuna Rasa is the sentiment of compassion or mercy, and is extolled as one of Lord Rama’s greatest virtues. It is observed when Dasharatha falls at the feet of Kaikeyi, begging her not to send Rama away on exile, and also when Sita is abandoned by Rama in order to keep the kingdom above his family.

Roudra Rasa or anger is on full display when Vishwamitra comes to Dasharatha’s court but is denied his demand for Rama’s help in protecting the yagnas from rakshasas. Lakshmana plays the role of the angry, young man when he displays this sentiment at various occasions.

Veera Rasa is the sentiment of courage. This is amply described in the episodes of Rama’s slaying of Tataka, his handling of the Parashurama’s bow, and the killing of Viradha, Kumbhakarna and other rakshasas. Jatayu also showcases this sentiment when he dies fighting Ravana.

When Parashurama challenges Rama, it evokes terror or the Bhayanaka Rasa in the minds of those witnessing the incident. Mareecha was petrified when he was commanded by Ravana to take the guise of a deer to lure Rama away from Sita.

Bibhatsa Rasa or disgust is the seventh Rasa. The description of the demoness Ayomukhi, who ate anything and everything that she saw by crushing their skulls and eating them whole, evokes such a sentiment.

The way in which Rama fought off fourteen thousand rakshasas seemed like fourteen thousand Ramas were fighting. The hands which are generally used to embrace, were used to kill Tataka, while the feet which are used to punish, gave emancipation to Ahilya, which evokes surprise and wonder, the Adbhuta Rasa. Hanumanji’s flight across the ocean is also wonderful. (In fact, finding all these rasas in a Bhakti Kavya like the Ramayana itself is a wonder.)

The final Rasa, Shanta Rasa, is that of bliss, purity and serenity. This is described in Rama’s enjoyment of nature’s beauty, even in exile.

These nine rasas, which embody the entire gamut of human experience, are meticulously featured in great works of literature, in different Ragas in music, and also in display of abhinaya in dance.

Shri Dushyant Sridhar concluded his excellent presentation on with a prayer, having bestowed upon the audience a deeper understanding of the depiction of emotions in art and literature.

The Yantra Dances – A look at Classical Indian Dance as a Parallel Yoga by Smt. Mandakini Trivedi

Smt. Mandakini Trivedi, a dancer, scholar and writer. brought together the two terms – Yoga and Dance – to explain the relevance of each to the other, what ‘yogic’ refers to and what of dance becomes yogic.

Classifying the dance into Form, Content and Experience, she delineated aspects within these parameters that culminate in the Yogic. The ascent of a student from being under the guidance of the teacher to a point where the inner Guru leads the student is also an aspect of the Yogic traditions that is evident in the practice of the classical dances.

Likening dance to the Human body, she drew parallels between the various layers that conceal the vital organs in the body and the various metaphors and subtexts that hold within philosophical essence in the arts. Drawing the Mandala of the five elements, Time, Space and Gunas, she elaborated on the aesthetic understanding of the body, its movement and the creation of dance.

Utilising the basic stance of classical dance, she brought together our understanding of yogic principles, world views, cultural intricacies and reflections therein. She concluded with an excerpt from performance in praise of the Mother goddess.

The talk offered an insight into years of inter-disciplinary understanding – one that is vital to the growth of any student of the arts.

The eminent scholar, performer, writer, and retired professor from the Banaras Hindu University, Pt. Dr. Ritwik Sanyal took the audience on a journey to uncover the secrets of this ancient tradition of Indian Classical Music.

Dhrupad is derived from the Sanskrit term, “Dhruva-Pada.” Dhruva, or the North Star, refers musically, to the refrain in the composition; philosophically, to the permanent, unchanging, constant; and spiritually, to the realization of the oneness of sound that we are all in search of. Pada refers to poetry and is reflected in the rich lyrical tradition of the art form.

Dhrupada traces the history of musical tradition in India from the Vedas to the diverse genres which later emerged from it. It is a complete musical system, including swara, sur and alaap (melodic improvisation), taala, chanda and laya (rhythmic intensification), and pada. Pada provides a narrative or description of a situation and must complement the Raga. “Ageeta” or “Apada” or meaningless syllables also feature in this art form.

In Dhrupad, every sound, tonal or syllabic, is considered sacred. The practice of the art form of “Alaap, Dhrupad and Dhamaar” transcends entertainment and is intended as “Upasana” or worship of the “Adrishta” or Unseen, in order to dive deeper into the pure realm of sound.

Shruti is regarded as the source from which the swara manifests. The correct pronunciation of the Digambara Swara makes describing the raga possible. Alaap is to pronounce, define, elaborate and improvise upon the Raga, while Alankaras (sequential patterns) are used to decorate the Raga.

Gamaka (movements) include Meend (long slide) and Andolita (oscillations) among many others, uniquely rendered by different oral traditions. Ten Lakshanas are used to systematically unfold the Raga. Ninety-six varieties of Sthaya, enumerated in Sangeet Ratnakara, are interesting, subtle movements that are used to beautify the realm of the Raga, providing the aesthetics of Dhrupad.

Musical instruments are also key. It is said that the Voice as the King and the Veena as the throne, do indeed complement each other.

The practice and performance of Dhrupad also has deep philosophical and spiritual goals. Seeking the essential, beyond the existential, leads the practitioner of Dhrupad on a journey from PrakaTa (manifest) to Sukshma (subte) to Gupta (hidden) and eventually to Vishranti (silence). Alaap takes on the form of Nada Yoga, or Nirguna Upasana (meditation upon the Unmanifest), while Dhrupad singing takes the form of Leela, or Saguna Upasana (meditation upon the manifest).

Pandit Ritwik Sanyal thus gave the audience a glimpse into the symbolism and significance hidden behind the practice of this ancient art form.