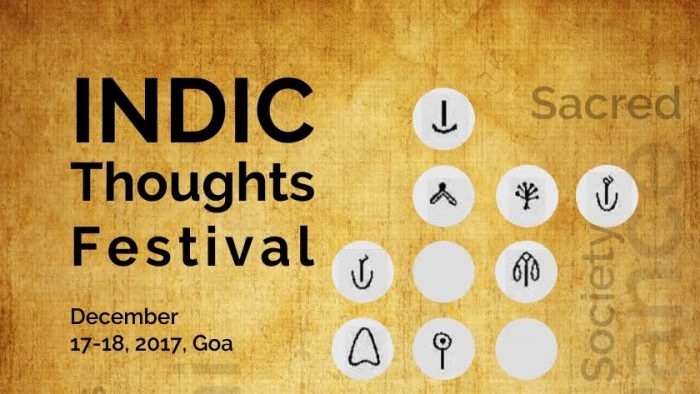 The inaugural edition of “Indic Thoughts Festival” was held on December 17-18, 2017 at Grand Hyatt in Goa and the event turned out to be a grand success. It was a two day event, held immediately after India Ideas Conclave, and aimed to fuse elements of TED with a Lit Fest and a Cultural Fest. The Festival co-curated by Hari Kiran Vadlamani and Vikram Sampath explored 7 themes: Opening remarks were made by Ram Madhav, the National General Secretary of the Bharatiya Janata Party, who explained why Indic thought was the most liberal thought that the world had ever produced and how it was the most democratically evolved of all.

He noted that Indic thought “is a product of the deep contemplation of great sages and saints, their great dialogues and discourses. A bhadra icchha, a benign wish had originated from that, and it was about abhyudaya, progress and prosperity…That bhadra icchha led to the evolution of the core principles of Indic thought several millennia ago. It explored all dimensions of human existence, and concluded that life is a celebration.”

He added that “Ananda”, eternal bliss, is the ultimate objective of this and that Indic Thought teaches us to celebrate life.

This set the tone of the Day 1 of Indic Thoughts festival. The event started with a mesmerizing dance performance on Adi Shankaracharya’s Bhaja Govindam by Pavithra Srinivasan, a Bharata Natyam dancer and the first recipient of the Yuva Kala Bharathi title from Bharat Kalachar. 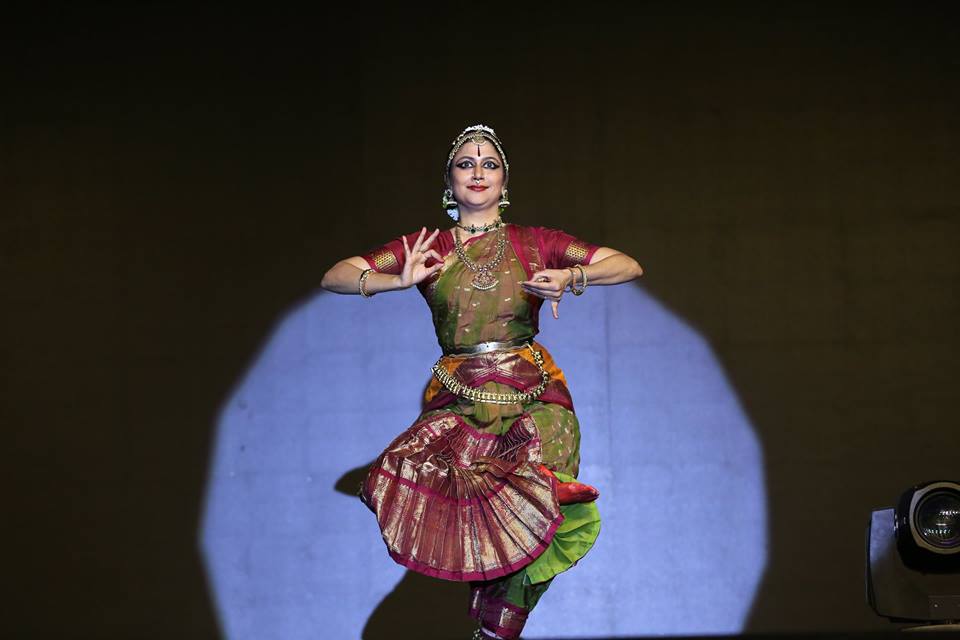 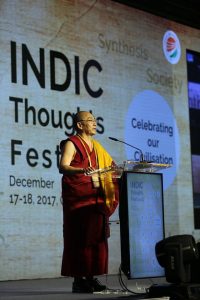 The first talk was on “Eternal Vedanta” by Shri Chanchalapati Dasa, who is the Senior Vice-President of ISKCON, Bangalore and Vice-Chairman of the Akshaya Patra Foundation.

This was followed by a talk on “The Path of The Buddha” by Dr. Geshe Ngawang Samten, the Director/Vice-Chancellor, Central Institute of Higher Tibetan Studies, Sarnath (Varanasi). He observed that: “The most wonderful facet of the Indic Thought is that it was never developed in isolation but through interaction.”

‘Vedacharya’ Dr. David Frawley gave an interesting talk on The Upanishadic Way of Self-Knowledge and its Global Relevance. He mentioned that India had enlightened the world in the past and continues to enlighten the world today, especially with its thoughts, views and wisdom. He added that Indic Thought is the part of the Dharmic civilisation, a cosmic creation which perpetually lives within our hearts at all points of time.

This theme started with a wonderful performance by Mr. Ricky Kej on the theme ‘Environment as a Sacred Entity’. Ricky Kej is an Indian-American composer, music producer and conservationist. Performance by Mr. Ricky Kej and his group Dr. Chithra Madhavan gave a riveting presentation on ‘Poetry in Stone: Indian Temple Architecture’. The focus of her research is temple architecture, iconography and epigraphy. In her talk, she shed light on the history, sculptures, inscriptions, gopurams, and mandapams. Dr. Vamsi Krishna Ghanapati*, a noted exponent of Vedas gave a lecture titled Intonations and Chants with demonstrations by him and his students. Dr. Nagaraja Paturi gave a talk on ‘Speech Divine: Not because its mine’ where he discussed the divinity of Sanskrit by providing objective Shastric view in terms of origins and root preservation. This was followed by a talk on ‘Devi – The Divine Feminine in India’ by Dr. Sonal Mansingh, who in her inimitable style noted: “The stones have been chiseled and the temples have been built and the chants have been uttered, and now has come the time to invoke the Shakti. I am the power that pulls Rudra’s Dhanush. I stretch between the earth and the sky. I have given birth to my ancestors. And I created you!”

Under the theme of Science, Dr. Krishnamurthi Ramasubramanian discussed some of the unique features of Indian Mathematics and Astronomy. He stressed the need for making the younger generation aware of their rich scientific and technological heritage. He gave examples of how texts on mathematics and astronomy in India have been composed in Sanskrit and in the form of verses so as to help readers easily remember. Dr. Sai Susarla, then, talked about how modern technology can be leveraged to mine the knowledge present in our traditional texts. Dr. Rama Jayasundar gave a very interesting talk titled “Mantra: From Metaphysics to Biophysics” where she demonstrated empirically the impact of Sanskrit mantras on the human brain.

Dr. Sangeetha Menon gave a very engaging talk titled “Indian Theories on Consciousness”. Her expertise is in Indian philosophy, consciousness studies, philosophy of psychology, philosophy and psychology of self. She works with her colleagues at NIAS and collaborators across the world in creating and encouraging a first-person centered approach to understanding consciousness and that formed an important aspect of her talk. This section had a number of wonderful performances. Dr. Vikram Sampath gave a talk titled ‘The Story behind the Song’ to set the tone for the rest of the festival for the evening. Dr. Jayanthi Kumaresh and her group gave a wonderfully energetic and mesmerizing Carnatic veena concert. This was followed by a soulful Hindustani Baansuri concert by Pt. Ronu Majumdar and group. Performance by Dr. Jayanthi Kumaresh and her group

With this Day 1 of the Indic Thoughts festival came to an end.

The second day started with the theme ‘stories’, the fifth theme. When one thinks of stories, Mahabharata occupies a prominent position. Prof Vishwa Adluri delivered a spell-binding talk titled ‘Dharmaraja’s Lie’ on Mahabharata and some of its spiritual themes which gets lost in the ‘secular’ history-centric discourse of modern society. Dushyanth Sridhar is one of the most sought after speakers on Sanatana Dharma, who renders discourses in English and Tamil. The title of his talk was ‘Kālakshepa – How not to waste time’. He explained how the term kalashepa is closely associated with Vedanta and gave a few examples of such things which are considered right but are actually wrong as per traditional understanding.

Dr. Makarand Paranjpe gave a talk titled ‘Padmavati: An Indian Story’. He made an excellent point that there were millions of Padminis who preferred death over rape and dishonor. Bestselling author, Amish Tripathi gave a talk titled ‘Mythologies & their Contemporary Relevance’. He explained how Indians have a sense of grief and anger over their current downfall compared to an earlier exalted status. He noted that we should be proud that we survived and are thriving whereas numerous other comparable civilizations died out. Amish Tripathi delivering his talk on the importance of mythology This theme aimed to counter the dominant narrative of patriarchy, caste, sexuality and gender rights in India and especially in Hindu society.  Dr. Madhu Purnima Kishwar gave a talk titled ‘The Feminine in Indic imagination’. Dr. Bharat Gupt talked about India as the ‘Land of the Kama Sutra’. He noted how Kama-Sutra was also a Shastra and thus it gave methods for pursuing Kama as one of the purusharthas. Dr. Abhinav Prakash Singh, an Assistant Professor of Economics at University of Delhi, gave a talk titled ‘Caste-Matters’ where he showed how the traditions in India did not believe in oppressive and suppressive caste system as it is made out to be in contemporary discourse.

Smt. Laxmi Narayan Tripathi, a recipient of Swarajya Shri Narayana Guru Award for Social Work 2017 from the Vice President of India, is a transgender rights activist, Hindi film actor and Bharatanatyam dancer in Mumbai. She talked about The Third Gender. Shri Abhijit Iyer Mitra, a Research Officer at the Institute of Peace & Conflict Studies spoke about ‘The Queer Pitch’ where he noted the false narratives which try to portray India as LGBT-intolerant.

Hari Kiran Vadlamani gave a talk titled ‘Global Synthesis Agent: India as a Soft Superpower by 2030’, where he spoke about how culture can be a source of economic strength. He outlined a multi-dimensional strategy for India to move in that direction. Dr. Nalina Gopal, who is the Curator of the Indian Heritage Center gave a presentation titled ‘A Syncretic Past: Hindu-Buddhist Influences in Southeast Asia and Beyond’. Sriram Emani, then, talked about ‘Raga Revolution: Classical can go viral’. Haleem Khan is an Indian Kuchipudi dancer, performer and movie actor. He started by giving a wonderful dance performance followed by recounting his life journey in a talk titled ‘Bridging Frontiers’. He explained the challenges he had faced as a Muslim boy from an Andhra village interested in Indian spiritual and classical dance forms.

The festival came to an end with a Contemporary Dance performance by Madhu Natarajan Kiran and her team.

The whole Festival was a spectacular celebration of our civilisation. In the words of Ram Madhav: “Indic Thought is very profound, and yet very humble. It doesn’t ordain any final word and demand that followers believe it. We are not ‘believers’, we are ‘seekers’.” And true to these words, the Indic Thoughts Festival 2017 displayed profoundness in content, all the while remaining humble in presentation.

Events like these will completely revolutionize the Indic space and challenge prevailing narratives by providing a distortion-free accurate counter-narrative rooted in Dharmic ideas and thoughts.

* There are eleven ways of reciting the Vedas – Samhita, Pada, Krama, Jata, Maalaa, Sikha, Rekha, Dhwaja, Danda, Rathaa, Ghana, of which Ghana is usually considered the most difficult. A pathin is a scholar who has mastered the pathas. Thus, a ghanapaathin has learnt the chanting of the scripture up to the advanced stage of ghana. The Ghanapatha or the “Bell” mode of chanting is so called because the words are repeated back and forth in a bell shape.