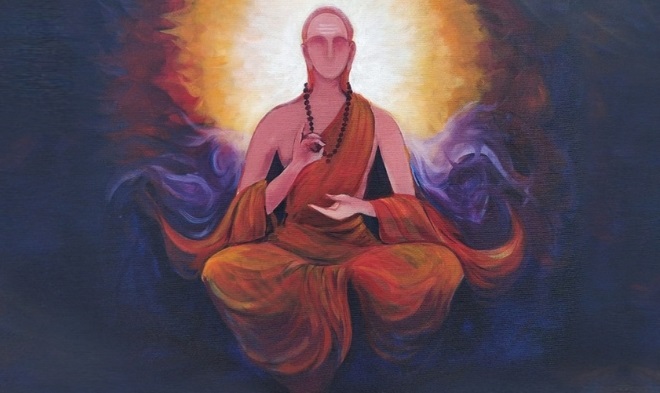 Dhyāna, the Hindu word for what the contemporary world calls meditation, has been a key concept and practice throughout Hindu history, as recorded by its texts, culture and traditions.

Expressions such as the following—taken from the Ṛgved-saṃhitā, a very ancient source of knowledge in this respect—show that thoughts about meditation have had significance since the beginnings of Hindu culture:

Since the Vedic Samhitās, the Upaniṣads, Gītā and all other Hindu traditions like Yajñas, Yoga, Āgamas, Tantra, Itihāsas, and Bhakti have included and fostered Dhyāna.

These meditative practices are not merely textual, theoretical or archaic practices from the past; they have been kept alive across epochs by great sages and seers and by some who still exist amongst us continuing to preserve these practices as a living system of knowledge.

Multiple varieties of dhyāna can be found in the diverse approaches to Hindu inward spiritual practice. Many of these are found documented, reflected and discussed below:

To whichever deity the offering is to be made, that divinity has to be meditated upon while uttering vaṣaṭ

Thus the Saṃhitā-brāhmaṇa portions of the Vedas that are devoted to Yajña become important in the context of meditation studies.

Meditating upon the rising and the setting sun, the scholar, follower of the Vedas (Brāhmaṇa) attains all wellbeing

Take up the bow of the Upaniṣad, that mighty weapon, set to it an arrow sharpened by adoration, draw the bow with a heart wholly devoted to the contemplation of That, and O fair son, penetrate into That as thy target, even into the Immutable.

Bhagavadgītā describes Dhyāna-yoga (Chapter 6) that lays down the preparation for Dhyāna, the object of meditation, and the qualities of a person who desires to do Dhyāna,  amongst other things.

Dhyāna is the term that is generally used in this discipline for meditation. Sage Patañjali confirms that the definition of Samādhi is also the same as that of Dhyāna—‘tadeva’ (yogasūtra 3.3)—where the object of meditation alone shines forth—‘arthamāstranirbhāsam’ (yogasūtra 3.3) and Samādhi is Yoga (yogasūtra Sage Vyāsa’s commentary 1.1).

Svātmārāma, in the very opening verse of his celebrated work Haṭhayoga-pradīpikā, states that Haṭhayoga serves as a ladder to Rājayoga (HYP 1.1). The term Rājayoga is used in Haṭhayoga-pradīpikā, as a synonym for Samādhi (HYP 4.3), which the work describes as a higher state of Dhyāna. The fourth chapter with 114 verses speaks of various practices for Cittalaya including Nādānusandhāna. Texts, earlier and later than Haṭhayoga-pradīpikā, such as Yogayājñavalkyasaṃhitā and Gheraṇḍasaṃhitā, also discuss Dhyāna. Further, continuing with the system of Yoga, meditative practices and insights are elaborated in the Yogopaniṣad literature and also in the magnum opus Yogavāsiṣṭha.

Tantra is a system of knowledge of Vedic continuity that gives importance to meditation with mantras, philosophy and methods for wellbeing.

Tantra prescribes actions with a focus on minute detail, similar to that of the saṃskāras of the smṛtis, that establish it as a system for imparting mindfulness.

“O Bharadwaja, behold the beautiful and pleasant waters of this river. This holy spot is as clear and pure as the mind of a virtuous man.”

“Mind propels the sense organs to do good or bad deeds. (But) my (Hanumān’s) mind is firmly established in righteousness.”

The other epic Mahābhārata discusses Dhyāna in the course of conversations, such as Bhīṣma-yudhiṣṭhira-samvāda in śānti-parvan, and in narrating events of tapas, such as Arjuna’s tapas for Pāśupatāstra. Rāmāyaṇa and other Purāṇic texts incorporate Dhyāna as part of discussions on Astras and related supernatural practices. Bhāgavata and other Purāṇas repeatedly include Dhyāna as part of the procedures of Bhakti as instructed and practiced by various sages and Bhaktas.

The Bhakti traditions on Śiva, Viṣṇu and other divinities can be seen as continuity of deity worship initiated in the Tantra lore. Saṃskṛta texts on Bhakti, such as Nāradabhaktisūtra and śāṇḍilya-bhaktisūtras, speak about the absorption of the mind in the process of Bhakti. Various regional traditions—like Caitanya Bhakti literature from the East, the vast Abhaṅga literature of the west, devotional compositions of mīrābāyī and other Bhaktas of the north, and Bhakti lore created by ālvārs and nāyanmārs of the south—also abound in meditative wisdom.

Many living traditions have worked together to keep alive the above-mentioned meditative practices. It is not just sages but many mystics in folk and other traditions who have established Dhyāna as a living system of knowledge.

We invite scholars as well as practitioners to explore Dhyāna from various dimensions outlined above.

The Conference will be curated by Dr Nagaraj Paturi, Senior Director INDICA and co-curated by Dr Jayaraman Mahadevan, Director, Division of Textual Research in Yoga, INDICA.

Abstract of 300 words (font size 12, Times New Roman, 1.5 line spacing) must be sent by email to namaste@indica.org.in with the title of the Conference mentioned in the subject. Abstract must provide a brief description of the topic and, if required, the theoretical focus, objectives, study area, and research methodology. Acceptance of the abstract will be notified to the author.

Last date for submissions of the abstracts is November 15th. The Conference is scheduled for December 11th and 12th 2021.