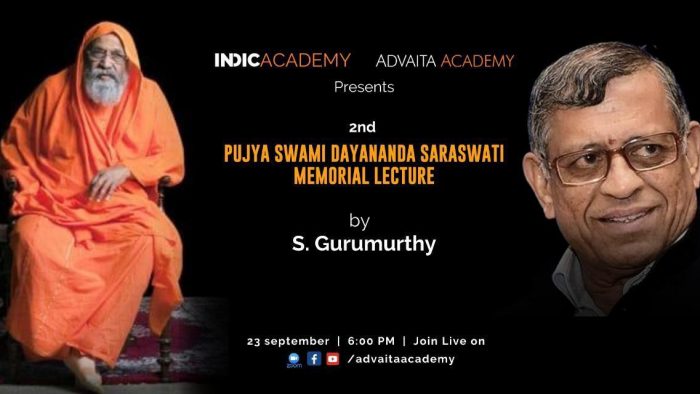 Join us live on Facebook, YouTube or register here on Zoom for the lecture at 6pm today, the 23rd of September.

About Param Pujya Swamiji:
Swami Dayananda Saraswati is a beloved Guru and philosopher from the Vedanta tradition. He is known for his thoughts on the inclusivity of Hindu philosophy and the importance of spiritual and religious diversity. His understanding of modern audiences has taken the message of Vedanta all over the world, to young students and new teachers everywhere. Apart from guiding teachers and shishyas alike, Swami Dayananda Saraswati is remembered for his philanthropic activities. He started AIM for Seva (All India Movement for Seva), which works to take medical, educational, nutritional and infrastructural assistance to the remotest corners of the country. Swamiji also convened the first ever World Congress for the Preservation of Religious Diversity and went on to lead a global commission under the same name, which was inaugurated in Bangkok in 2002. Swami Dayananda Saraswati also played a role in the formation of the Women’s Global Peace Initiative, which convened at the United Nations in Geneva in 2002.
Today, he is remembered fondly for his teachings and philanthropic work by shishyas and volunteers world over. This memorial lecture is a humble tribute to the great Guru.