108 Steps to The Sun Within – Weekend with Prof Subhash Kak 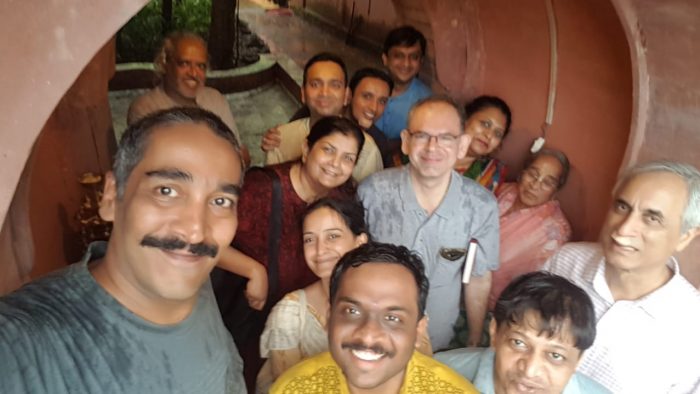 Indic Academy organised a Weekend with Padma Shri Prof Subhash Kak, as part of the Weekend with Wisdom retreats. Prof Kak, a renowned researcher and author took participants on a journey into the Vedas, which was also a journey inwards; into the structures of our consciousness.

If you have engaged with the beauty and power of the Veda, it may actually not take much to persuade you that it as much about the inner world as the outer one – with the outer one of ritual and liturgy, with the Mantras both plea and paean to the Gods, an exuberant celebration of the world. The Vedanta, the Upanishads, are more specifically about the inner experience – but in the tradition, the Veda as a whole has always operated at multiple levels – the sacrificial ritual, the inner experience, the level of the Gods, and that of the everyday, phenomenal world. The Adhi Yagnyna, the Adhyathma, the Adhi Daivika and the Adhi Bhauthika.

Vedic wisdom recognises a restless inner world of desires and failed outcomes, of emotions and conflict, and — without a doubt — of joy, achievement, and curiosity, and varied experience and endless exploration.

Experience and exploration of our inner selves as well as of the outer world. The outer world of the earth and its fragile riches, the numerous life forms, the sun and rain, the moon and stars, and the human body interacting with all of it and others of its kind.

And this human body, “you see, can get injured,” Professor Subhash Kak

quipped, with the rest of us ruefully grinning back, considering that the whole lot of us, about a dozen, were in a Tempo Traveller on National Highway 08 out of Mumbai, when it rear-ended a test-driven car in a loud bang and shower of glass.

We were all on the way to Goverdhan Eco Village near Hamrapur, the venue of Indic Academy’s two-day retreat with Padma Shri Prof Kak, Indian American computer scientist, insightful writer on the Vedas, engaging speaker, and an honest, brave and provocative thinker on a host of contemporary issues. The retreat was part of a new series of unstructured and free-wheeling interactions organised by Indic Academy with venerable scholars, an initiative described by its founder Hari Kiran Vadlamani as aimed at preserving and promoting the author’s work, as well as producing new streams of thought inspired by the scholar’s ideas.

Given that the accident rattled all of us, with Prof Kak and a participant, Dr Vineet Agarawal, needing a few stitches, in fact, it was always going to be on our minds. We shrugged it off quickly enough, with Prof Kak leading the way in a speedy return to settled minds and the picking up of where we left on rich conversations already begun straight out of the Airport.

It is just that we just had to give the accident that its nod — the human body in the phenomenal world of action and reaction, pull and push, of electrons — and fast-moving vehicles – that careen and collide.

So we started with inner and outer — where does the one end and the other begin? In the Vedic world, the Rishis saw that an inner cosmos, within our consciousness, mirrored the outer one, and the processes were connected, bound together, in fact, in bandhu.

“Reality was seen to be in triplicate,” Prof Kak noted. In the outer, we have the earth, the space above us, and the sky overarching it all. Correspondingly, in the inward direction, we start with the physical body, the breath (prana) and the mind.

And in the sky is the Sun and the Moon. In the cosmic sacrifice of the Adhi Purusha, which created the universe, the Moon is born of the Purusha’s mind, the Sun from His eyes. The Moon is the Mind, and the Sun is our Eye, indeed more, the eternal flame within, the ‘parama svaraat’ of the Narayana Suktham. And as innumerable Vedic scholars have pointed out, after the venerable Yaska, the Veda is a religion of the Sun. The Fire, Agni, is the Sun on earth, He is Indra/Vayu in the Antariksh, and Aditya Himself in the Sky.

And this is where things got really exciting, as Prof Kak elaborated on one of his most wonderful insights — the kind where, once you hear it, “things will never be the same again.”

And so we have it. 108 Gayatri Mantras in the daily Sandhya of the Vedas. 108 Pancha Dashaksharis in Sri Vidya Upasana or 108 iterations of beeja mantras in other Tantric upasanas. Or 108 namavalis or ashottarams to the great Deities in our temples. 108 steps then, to connect to the inner flame, the inner truth, where the ultimate Vedic Yagnya is happening on the ultimate Altar.

One of the best things listening to Prof Kak outline symbolic and metaphorical readings of the Veda, in contrast to others who stress symbolic interpretations, is a sense of how reasonable and rooted in the text he is being, as he goes about his business. Many, in their eagerness to showcase symbolic meanings show a misguided zealousness in wanting to “rescue the Veda from the ritualists,” and end up doing a disservice to the very corpus they want to venerate. Of course, we can leave out of the discussion the other group to whom the Veda is “only” that – ritual and liturgy. This, of course, brought us to how Vedic scholarship has also fallen prey to that most massive scholarly misconstruction of all time – the Aryan Invasion Theory. Its continued provenance, of course, is due to malice, not missteps, and its origins in a “European Identity Project,” which saw India as a corrupted remnant of ancient Indo- European Aryan glory.

One can still see how this Project operates in Vedic scholarship – there are even scholars and groups who want to claim the Rig Veda for Europe, attributing everything else in the Vedic corpus to the Vedic people who came later, with their tiresome rituals and cows.

Of course, Prof Kak also talks about the “traps” that the purveyors of ancient wisdom put in the various journeys and paths they outlined, simply to ensure we are not led to comfortable delusions. The ritual world can be such a trap, Prof Kak notes.

There are others of course, who would see it not as a trap, but an elevated highway to both realisation and transformation, both in the here-and-the-now of the phenomenal world, as well as a world beyond.

Be that as it may, this is where Prof Kak unleased another unique insight. Any approach, any journey, any ‘Darshana,’ will have at its heart a paradox, meant to ensure that you are not deluded.

On a side note, Vedic culture, thus, may well be the source of the famous Chinese articulation of every force having in itself the seed of its opposite, as shown in the Taichi or Taijitu symbol of yin and yang.

For our purposes though, what Prof Kak outlined was a view of the famous Shad Darshanas, the six philosophies or “seeings” of Vedic thought as a “Cube,” taking forward the idea in the tradition where the six are actually three complementary pairs, each, in fact, needing the other to complete itself. Nyaya- Vaisheshika, Sankhya-Yoga, and Mimamsa-Vedantha.

In the six-faced Cube of the Shad Darshanas, each side and it’s opposite is a complementary pair. At any given point, one is the floor, one is the roof, one to your left, one to your right, one in front, one behind. An image forms in my mind of a cube in space. Go to one side too much, not only does the Cube tumble, you fall into the opposite, till you perhaps find the dead centre, balanced, poised, with every darshana at equidistance….

After that, we had to come to the Gods. After all, in the Veda, there is no mantra which is not associated with three essential elements – the ‘Chandas’ in which it has been formulated, the Rishi who is literally, the seer of the mantra, and the Devatha to whom it has been addressed.

Prof Kak has written about the “Gods within”, the deities as Cognitive centres in our consciousness, and so on. Then there are Vishnu’s three steps – remember the triplicate nature of reality – and His foundation in the order of the world. How Vishnu represents the order and moral basis of the world and Shiva represents freedom.

How Vishnu is “being”, and Shiva is “becoming.” How the Devi, Shakti, is “the whole inner domain” indeed the domain of the process, the process of unveiling, discovery and our journey to truth, with our multiple selves, the nine gates, the points of the dual triangle of Shiva and Shakti. “At the heart is always the Goddess,” prof Kak said.

As the late Prof Ramachandra Rao used to stress, both the Veda and the

Tantra is old traditions in India, and they have frequently borrowed and enriched each other.

True to our mandate, the retreat was quite wide-ranging. We talked about ‘Dhvani,’ not just sound but resonance, where we perceive implied and implicit truths and beauty. We talked about how Indians have it in them to be insightful, how we need to boost our articulations skills to match those “wonderful insights,” that we are capable of. And we talked about aesthetics, about the aesthetic deficit, and how we are also poor at “minding the store.”

One thing became clear in the two days. The wares are here, in all their shining worth. If only we could showcase them better, for ourselves, and also mind the store better. 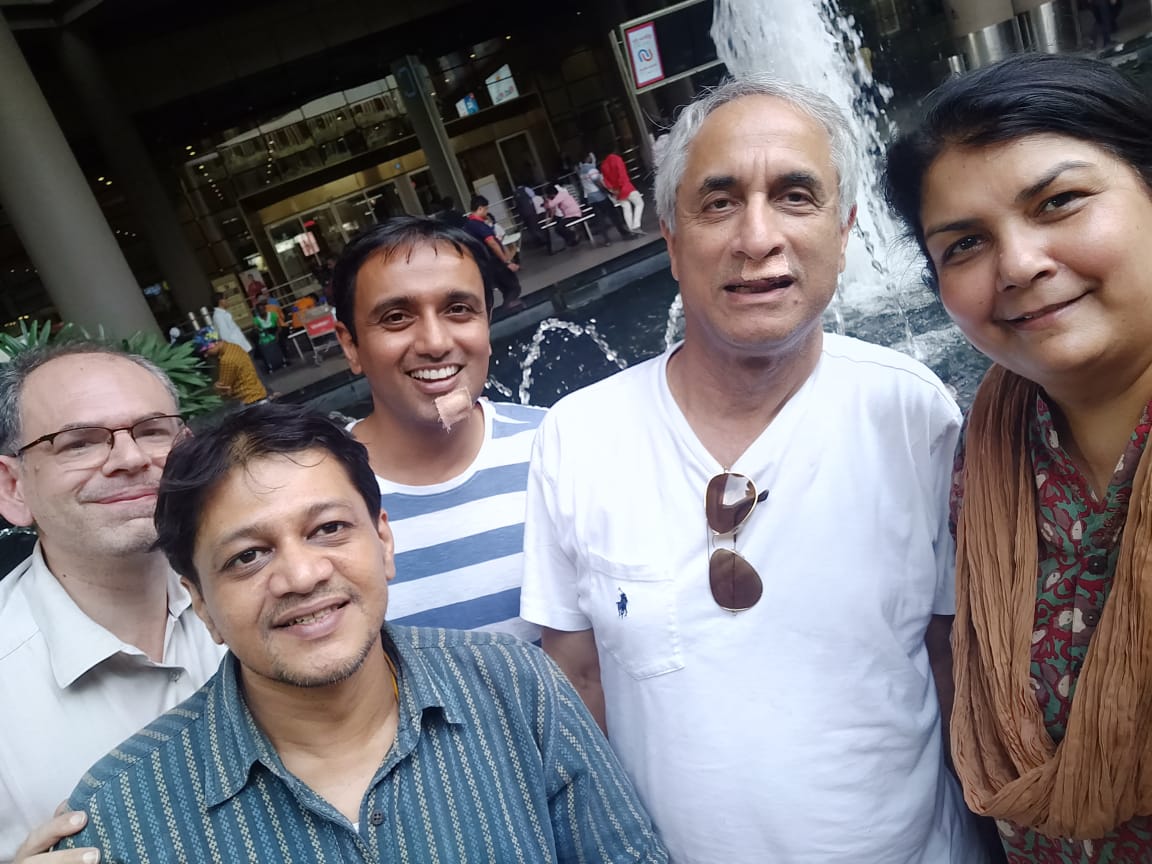