Re-Enchantment Through Color In Theyyam 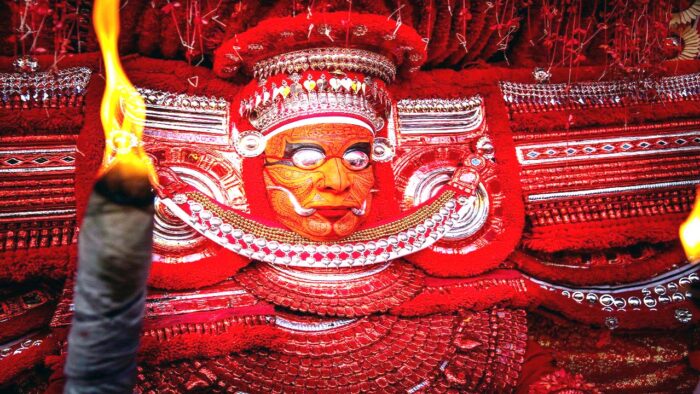 “Art without meaning is just decoration. The art is in the idea.” – Rick Rubin.

Kochunni got up as usual, early morning, took a bath and went to the temple. The sky was a bright orange, but the air smelt different. The sublime woody fragrance of camphor permeated through the atmosphere. A shiver ran through his body. It was time to get ready for the act…the act of Theyyam.

Kannur, in North Kerala, wears a festive look during the months of December through March. Theyyam, a ritualistic dance form is the highlight of the North Malabar area in Kerala.

Let us look at some stunning visuals from this folk form. 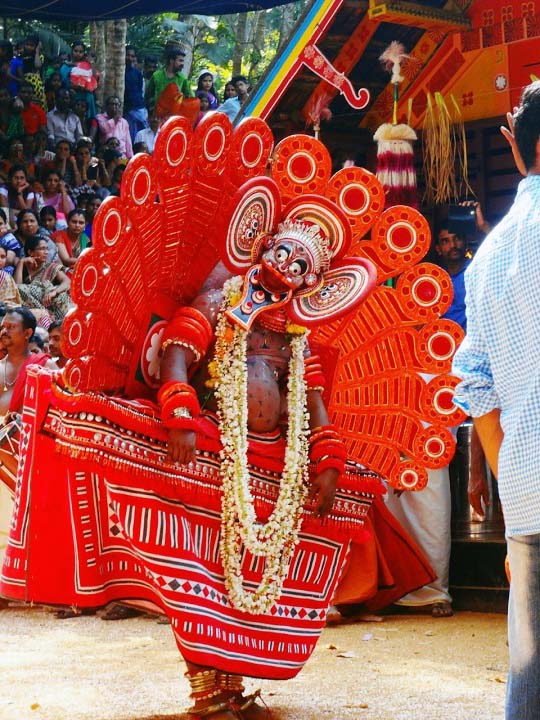 Color has been symbolically associated with emotions, movements and costumes. What does one feel when one sees the color red? How striking does the costume look if it is colored all red? Are there certain movements that denote red? These are some of the aspects we would be looking at through this paper.

Does color matter at all? Yes it does. It is as simple as that. Color has many faces. Red that seems fiery to me, may seem warm and comforting to you. Similarly yellow might seem sunny and joyous to one persion, but may seem bleak to another person.

While researching on the colors of Theyyam, I came across a few findings.

Codifying colors in Theyyam is a gigantic task. The arrangement of colors in this art form is done in harmonious and contrasting ways. I will take you through some with examples.

I am going to mention a specific character here – the character of Bhagavathy or the Goddess. She uses colors such as red, black and white. This is because there is a symbiotic relationship between color and emotion. Since the advent of time, Bhagavathy has played pivotal roles in restructuring the canvas and in defying norms. She has fought bravely to bring about peace and calm through the world. She is calm, therefore the use of the color white. She is fierce and angry, hence the color black. When she transforms into her original form of a mother and saviour, the color red is smeared all over her.

During my training as a student of Kathakali, my Guru would always ask me: “When I explain the role of Kunthi to you, what colors do you see?” I was 16 then and failed to comprehend the question. But as my awareness and knowledge of the art form grew, I understood the importance of that question. I realized that colors and emotions are synonymous with each other. Kunthi was a mother and was sending her sons to war. White and black were her colors. White represented peace and purity whereas black represented negativity and fear. Theyyam artists also go to great lengths deciphering and codifying color. Colors in Theyyam are associated with emotions, movements and costumes. Arrangement of colors in Theyyam is harmonious and contrasting. How?

The fact that one and the same color can perform innumerable roles is consciously applied in Theyyam. My research also led me to comprehend that color differences are caused by two factors – hue and light. Allow me to take you back in time, when nilavilakku or traditional lamp was the only light present. It was at that time that these colors and their hues gained immense importance, not only for the performing artistes, but also the audience. At night, the color red or green would get heightened. During the day or early dawn, the same colors revealed another set of hues.

From times immemorial, a color code has been identified. The art form has followed it religiously. Mukhamezhuthu or painting the face is an art, delightful to watch. Natural ingredients such as leaves, flowers, stones, seeds and vegetable dyes are used. 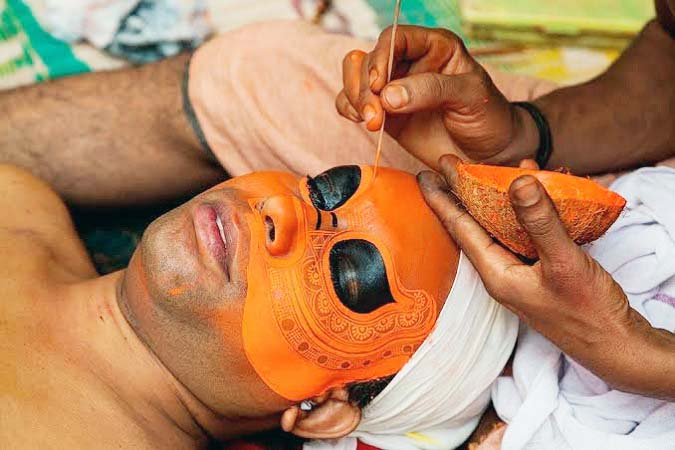 Two of the most common earth pigments used are red earth stone and black stone. These stones have their own levels of explorations and layers of discovery. Since these stones were found extensively in and around the area, they were used to paint red and black colors. Turmeric is still used for yellow and rice paste for white.

Application of makeup for a Theyyam artist is laborious. A couple of hours, lying on a mat, eyes closed, engrossed in the thoughts of the portrayal of the character, the Theyyam artist emerges as the character he is to play. They have entered another zone mentally.

Is there a male–female color differentiation in Theyyam? Not necessarily. The application of certain colors reveals characteristics of the character portrayed. It is neither male nor female.

Colors are symbolic in diverse sociocultural contexts. This ritualistic art form has used this aspect intensely. We can further understand this by observing the landscape of Theyyam which is often embedded in the contributions and influences of the cultural imagery of the people and state. From here, the repertoire and color coding of Theyyam emerges.

Let us observe the basic background of Theyyam. Performed in traditional spaces called Kavus, these Theyyakavus are seen only in North Kerala, mainly Kannur, Kasargod and in some parts of Kozhikode districts. If one observes the physical space of the Kavu, it does not have any idols as such for worship, as in temples. The space itself wears an extremely religious look. The highlight of each Kavu is the mark of the Kimpurusha, the Goddess of earth .A good look at this figure will send a chill down your spine. The figure carved in wood has huge bulging eyes, with a blood curdled tongue, long arms outstretched as if it is embracing the entire universe. The color red is significant here. Red has varied connotations. It could mean life, war, anger or even violence. Symbolism of red is that of action and oorja, or energy.

Theyyam artists go through an intense preparation period where they acclimatize themselves to the character. Their association with the colors the character is going to personify is also discussed at great lengths.

Bhadra is a young girl, barely 20 years of age. She has a deep, almost fatal attraction towards this art form. At dawn, she heads to the Kavu to mingle with the artists to learn the process of tyaari or initiation. It is a mammoth task to gain inroads into the process, more so because she is a female. She is, however, allowed to observe from afar. The artistes take the blessings of Mother Earth, then their Asans (gurus). The process is arduous, it is primarily that of observation and assimilation. The makeup commences after a prayer to the Goddess. Black, red, white and green pastes are spread across the floor on banana leaves. The designs created on the faces with red and black connote the intricate practice that accompanies the art form.

Is there a gender differentiation when it comes to application of color? If we look at ancient cultures, there is not much difference when colors are used to depict men or women. But as times passed, it was observed that there was a natural difference in color tone between men and women. Theyyam artists do not have too many females performing the ritual, therefore the colors of black, red, white and green have predominantly remained the same.

Vibrations enter with the use of color. This is an interesting phenomenon. Green signifies nobility, fertility and a certain sense of calm, white projects peace, but in this art form it eventually highlights the features of a character. 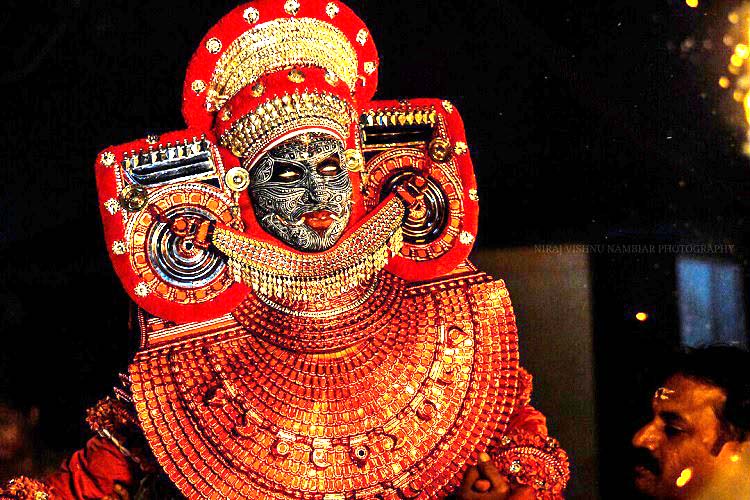 Studying Theyyam closely, I realized that it has intense palettes of color. But, with the current non-availability of material, is there a color dislocation? That was my question to Kochunny. Kochunny, the artiste, I mentioned at the very beginning is of the opinion that times have changed and with that availability of natural pigments has also lessened considerably. However, Theyyam groups all over North Kerala, Kasargod maintain that despite the fall in natural colors, the groups try to maintain a high level of efficacy when it comes to usage and application of colors.

Sustainable Tourism is the buzzword now, particularly in Kerala. Tyndis is an initiative to support and encourage rural art forms in Kerala, Theyyam being one of them. This organisation encourages students, writers, photographers and filmmakers to document and study the process subsequently providing additional income to the artists. Santhosh, an avid Theyyam patron and observer has been documenting the process and the art for over two decades. His websites Travelkannur.com and Theyyam ritual.com are comprehensive websites and informative portals for anyone who wants study the depth of Theyyam.

Some Theyyams use masks made either out of wood or brass. One can only imagine the weight the artists carries on their face or head. Many viewers who throng the Kavus or fields, find the masks funny. The Theyyams with their faces painted and adorning colorful costumes, generally made of palm leaves, dance as if there is no tomorrow.

The villagers believe that these masked characters are Gods descending from heaven to resolve innumerable issues plaguing their families and communities.

Color, to any society, is representative or symbolic to its culture. It denotes communication, it means ideas and we process what we see. Color also gives us the tool to absorb cultural influences. 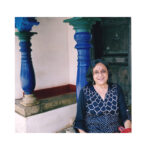 Madhavi Menon is a Kathakali and SeraikellaChhau practitioner. Her work spanning over three decades in the realm ofperforming arts, radio and education has gained herRead more