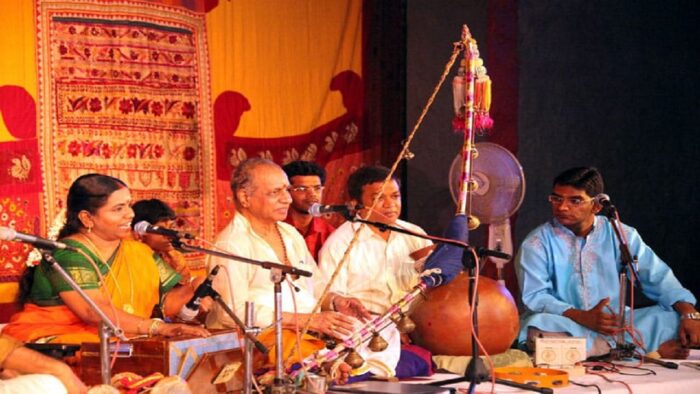 India is a land of varied cultures and traditions and this cultural diversity makes our nation a unique one. Indian folk arts are the products of different socioeconomic setups and traditions evolved over ages. Traditional folk arts are very close to the hearts of the people who are living at grassroot level. Storytelling is as old as our culture. It exists to entertain, to inform and to promote cultural traditions. Oral storytelling is an art wherein the performer tells story through voice and gestures. This can encompass myth, legends, fables, religion, prayers, proverbs and instructions. In India we have different forms of storytellings in different states. In Tamil culture there is one such storytelling method called villupattu or bow song in English, using traditional age old weapon – bow as musical instrument.

Folk song is an art in which the average member of the group participates more generally than is the case with the cultivated music or literature of the city. Nearly everyone in a folk group knows songs and sings them, or at least listens to them and knows a good deal about them. On the many occasions at which singing is by a group, the less outstanding singers have ample opportunities for participating [1]. The root word for folk is from German word “Volk” which means people. Villupattu is one of the most popular folk arts in the southern districts of Tamil Nadu, namely Tirunelveli, Thenkasi, Thoothukudi and Kanyakumari. It still stands as a symbol of cultural wealth of Tamil Nadu. Villupattu is mother of all storytelling arts [2]. The Villupattu concerts are seen prominently in the village festivals in these districts. Nowadays Villupattu concert is performed in metropolitan cities like Chennai and New Delhi on special occasions. The musical instruments used in these shows are very different. The sounds emanating from them are also rather interesting. The event will be accompanied by music from folk musical instruments, ancient myths, temple historical events, historical stories of village deities and other stories sung orally. Apart from this, it is noteworthy that the art of archery has a very special place in history. This rural art form known to some to the present generation is on the verge of extinction due to modern civilization and biological changes. Thus, it will be rare for the next generation to see it in person. This folk-style storytelling can last from three hours to 18 days, given that epics like the Ramayana and the Mahabharata are narrated in great detail. It is common during temple festivals in villages to narrate stories from ancient Indian texts, to make sociopolitical comments, or even to popularise government policies and schemes [3]. This art fulfils characteristics of folk music, for example it is transferred from generation to generation orally as like other folklore music and the compositions cannot be traced to any one source [4].

One day a king, who ruled the southern part of Tamil Nadu, went hunting with his men. After a long and exhausting day, the party of men decided to rest in a comfortable place. The king then invited his companions to sing for entertainment. But they did not have any musical instruments with them. The warriors who accompanied the king transformed their bow, arrow, and kudam, into musical instruments and started to sing. After returning to the palace, the king did some modifications in the musical instruments in order to cheer up soldiers during war thereby encouraging them by singing the war stories of their forefathers and legends who had participated in the war in the past. They sung loudly. People who listened to this uplifting history as a song may have fought valiantly on the battlefield but in general it did instil courage and bravery in the heart of the masses. It is said that the folk art of archery was born out of the fact that the concert, which once grew into a colourful mane, made its way to frequent performances to catch everyone’s attention. In earlier days there were no proper rules for the performing artists. The only quality for the artist was to sing in high pitch voice. This is said to be the first step of the bow song tradition. It was during fifteenth century one of Villupattu exponent pulavar Aruthakutty gave training for the villupattu and defined how the artist should perform. Even till now the rules given by pulavar Aruthakutty is practiced and performed by artists (5).

Villupattu is a group performance that combines narration and singing, where the central narrator strikes the string of the bow resting on a mud pot to punctuate his tale, another beats the pot while a co-narrator acts as a listener, raising questions on behalf of the audience, repeats the last phrase and acknowledges it with an aama (yes) to what the chief storyteller says. The rest of the artists play instruments. Villupattu is marked by simple tunes and verses. An ancient musical form of storytelling, it is popular during festivals and has half a dozen members. The length of the bow used is generally about 7 to 8 feet. The narration begins with an invocation of god.

Meaning: We Five members joined together worship to perform well in bow song.

The main musical instrument of the villupattu concert is a traditional weapon ‘bow’ called ‘villu’ in Tamil. Nowadays, instruments such as the tabla, mandible, pump, and harmonium are also used.

Bow: The main instrument of the villupattu is the bow. It is made from either palmyra tree, jackfruit tree wood or even bamboo having seven feet length. The bow has small vials hanging on either end of the beam. The two ends of this bow strand are pulled together and tied with a suitable rope. It has small bells at specific intervals. It is traditionally assumed that the number of these bells must be odd. Thus often 11 beads are attached to it. 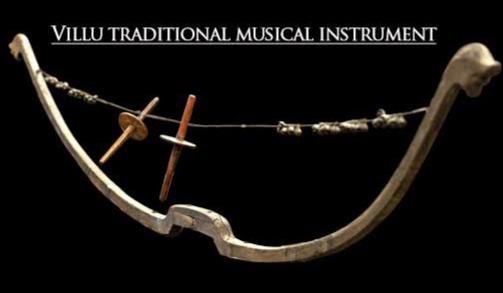 Meaning: We prepared musical bow instrument from Palmyra tree and it is tied with colourful cloths and bells to sing songs.

Veesukol: A tool called a veesukol looks like a stick with a small handle. The main artist, annavi, the storyteller will hold it in his hands. While singing, he will beat the strings of the bow with this swing and raise the music to the rhythm.

Uduku: Uduku is a great tool to excel in villupattu. It is through this instrument called Uduku that the ultimate music is expressed in such a way as to express the emotions in the show. This Uduku tool is a small form of Uduku. Thus it is also called cittudukkai. The sound of this verse is used extensively when narrating or singing divine stories. 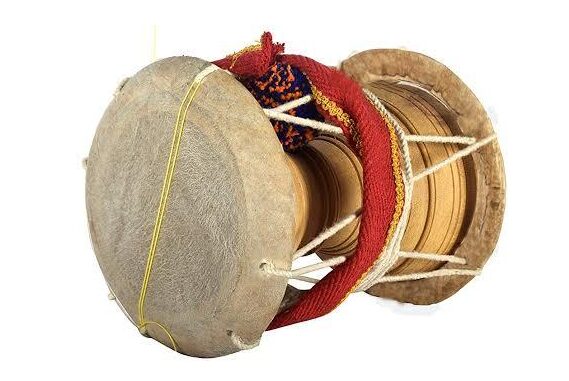 Kudam: Another important tool used in villupattu is the kudam. This is a pot made of clay. This bow is made of clay with a unique design that has a rimless mouth area. The earthenware is placed on the platform and tied with vill. Puriyana is the name given to a ring made of straw used to secure the kudam to the ground. In this, suitable music is born in the kudam with the band and in the opening part of the kudam with the patthi.

Meaning: A pot like vessel called kudam made up of mud is tied with villu and the pot is beaten with patthi. 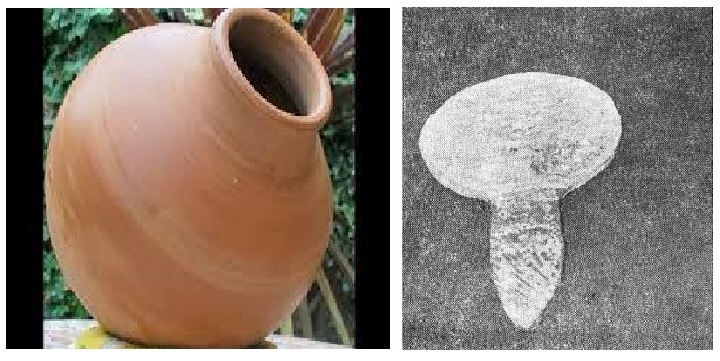 Meaning: I bought patthi which is made out of straw of paddy and plantain fibre to beat kudam. 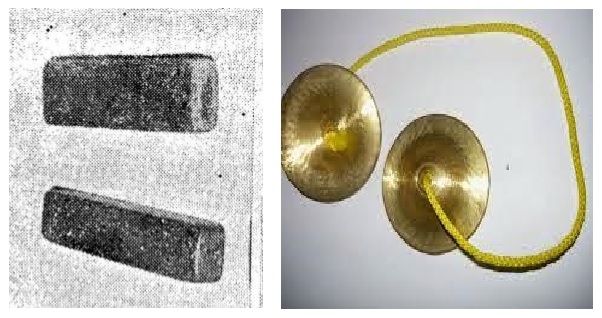 The events that take place in the archery show can generally be divided into seven parts.

Meaning: O Goddess Saraswathi please be with us while we are performing villupattu.

The lyrics of the backup song start with:

Meaning: I am here to tell stories using bow which was a weapon.

Meaning: I developed from mother’s womb and then my mother gave birth to me. I wandered here and there on the streets. My guru, who taught this villisai, I worship his feet.

Meaning: I am sitting in the beautifully decorated stage. In front of me more learned persons are there. With humility I am performing this art.

During the programme the audience forget their worries and enjoy the programme. To support this we can find one proverb in and around Kanyakumari.

An interesting event is said to be behind this proverb. During temple annual festival Villupattu concert was held in a village. The programme started at around 8 o’clock. It continued till midnight and the assembled devotees, temple administrators and staff were all so mesmerized that they lost count of time. All those who were immersed in the archery show, which was going on very enthusiastically beyond midnight, did not even notice that the lamps mounted in the temple sanctuary had been extinguished without oil and the thread had been charred. The lead artist, the narrator on seeing this, immediately sang in a humorous tone, “Villadichan temple, there is no time to illuminate lamp, Kudamadichan temple, there is no one ready, to illuminate the lamp.” It was then that the audience realized the situation and immediately went inside the temple and poured oil and lit the lamp. The lyrics of the song sung under the influence of this event on that day are still spoken as a proverb in this area till today. This event clearly indicates how much interest is created among audience during the programme.

Even today, despite numerous modern and well developed electronic systems being available in the mass media, the metropolitan and rural Tamil masses gather to watch and enjoy this ancient traditional entertainment art in spite of live Villupattu programs becoming quite rare. Government on its part is recognising the artists by giving awards to them. Subsequently more artists are seen performing villupattu, not only on village deities but also in concerts on Vedic deities like Lord Shiva, Ganesha, Devi and also on various gurus related to Hindu culture. Biographies of freedom fighters, great leaders, social reformers were also incorporated as theme of Villupattu. Government is also utilising artists to spread government policies, to educate awareness on AIDS, Dengue, COVID-19, etc., through villupattu [6] [7] [8] [9]. At the same time, because of tremendous reach of television channels, this type of folk art is struggling for survival. Industrialization also considerably affected the villupattu. Some artists engaged in other jobs to earn money to support their family [10]. .Moreover the society and government should encourage the artists by conducting more programmes in their village. During 1980’s All India Radio and Doordarshan did telecast villupattu with the intention of preserving the traditional cultural heritage of the Tamil society. This provided an excellent opportunity for the general viewers, especially the youngsters to have a glimpse of this ancient traditional art form and the source of its origin. In spite of all the limitations, it is indeed heartening to see more and more youngsters willingly becoming villupattu artists out of sheer interest. If only some concrete steps were taken to include it in the academic curriculum it would go a long way in preserving this traditional art. 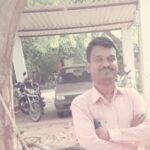