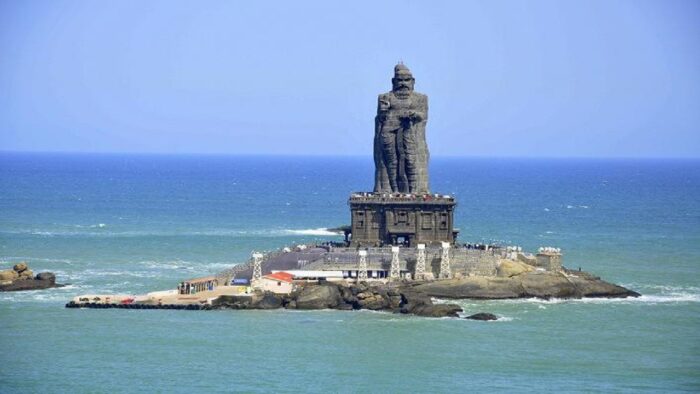 The indigenous shilpis or craftsmen of India, have left innumerable shilpa creations dotting the map of our country. Moreover, these wonderful and long lasting creative productions by the craftsmen are the reflectors of our age-old culture.

Today we stand awestruck by the ancient magnificent temples with grand entry gateways called Gopuras, multi-pillared mandapas, cave structures and sculptures that have stood the test of time, but we never ponder to know about the makers of this living tradition and their ancient technology. Research studies elaborate the science and technology involved in these huge skyscraping superstructures, technically called the Vimanas and other components of the sacred built form.

Two decades back, a historical monument was built atop the minor rock, about 400 meters from the coastline of Kanyakumari at the southern tip of the Indian peninsula. This monument, a stone sculpture, was built in honour of a renowned Tamil poet and philosopher Saint Thiruvalluvar.  A colossal stone statue measuring 133 feet tall standing amidst the sea is a scenic beauty created by the shilpis of the modern times.

The science and technology to create this tall stone statue is not known to many of us. Hence, my paper aims to reveal the following facts and secrets behind this stupendous stone statue.

About The Creator And His Unbroken Shilpi Lineage

Dr. V. Ganapati Sthapati, the designer and builder of Tiruvalluvar statue belongs to a continuous lineage of traditional sthapati’s over 35 generations. A graduate in BA (English), he started his career as a teacher. He studied and practiced temple architecture and sculpture in gurukula style under his father, Shilpakala sagaram Sri. M. Vaidyanatha Sthapati, the great master architect and sculptor of many edifices across India and overseas. One of his forefathers was the illustrious Chief Architect Sthapati by name, Kunjara Mallan Rajaraja Peruthatchan who designed and built the great Brihadeeswara Temple in Tanjore in the 10th century AD.

Dr. Sthapati was the Principal of the Government College of Architecture and Sculpture, which was established by his father Sri. M. Vaidyanatha Sthapati under the guidance of Tamil Nadu Government in early 1950s. After retirement, Dr. Sthapati started his own professional guild in Chennai and propagated the age old science and technology through his temple projects within India and all over the world.

A devoted scientist and vaasthu scholar, Dr. Sthapati, published more than 30 books on Indian vaasthu shilpa science and technology. He was the recipient of many prestigious honours and awards such as Vasthu Scientist, Shilpguru, Kalaimamani and Padmabhushan.

Dr. V. Ganapati Sthapati was selected among the many sthapati’s by the Tamil Nadu government to design and build the Tiruvalluvar statue measuring 133 feet high. He was the principal architect of many magnificent landmark monuments like valluvar Kottam, Poompuhar Kalaikoodam, Tamil University library building and administrative buildings etc.

Tirukural, the sacred verses containing 1330 couplets in classical Tamil language was rendered by Saint Tiruvalluvar. A colossal statue was proposed for this celebrated Tamil poet and philosopher to be built on the minor rock at Capecomarin – Kanyakumari, the southern tip of India.

Dr. Ganapathi Sthapathi, the chief architect, undertook the following method to design the statue and in accordance to shilpa shastra grammar. Tirukural contains 1330 short couplets under 133 chapters which is classified under three subjects; Virtue, Wealth and Love. In Tamil it is said Aram, Porul and Inbam.

After a thorough research of Tirukural, the doyen architect, Ganapathi Sthapathi derived the measurement of the pedestal from Tirukural’s first subject Virtue, which had 38 chapters. Hence he planned 38 feet high pedestal and an alankara mandapam surrounding the pedestal. The remaining 95 chapters from Wealth and Love were taken into account to design the statue. As a result statue was configured as 95 feet high from hair lock to feet.  In accordance to shilpa grammar, the height of Valluvar statue is based on 2½ times of its pedestal. Thus, the complete statue was measuring 133 feet high denoting the 133 chapters of Tirukural and in tune to shilpa grammar as shown below; 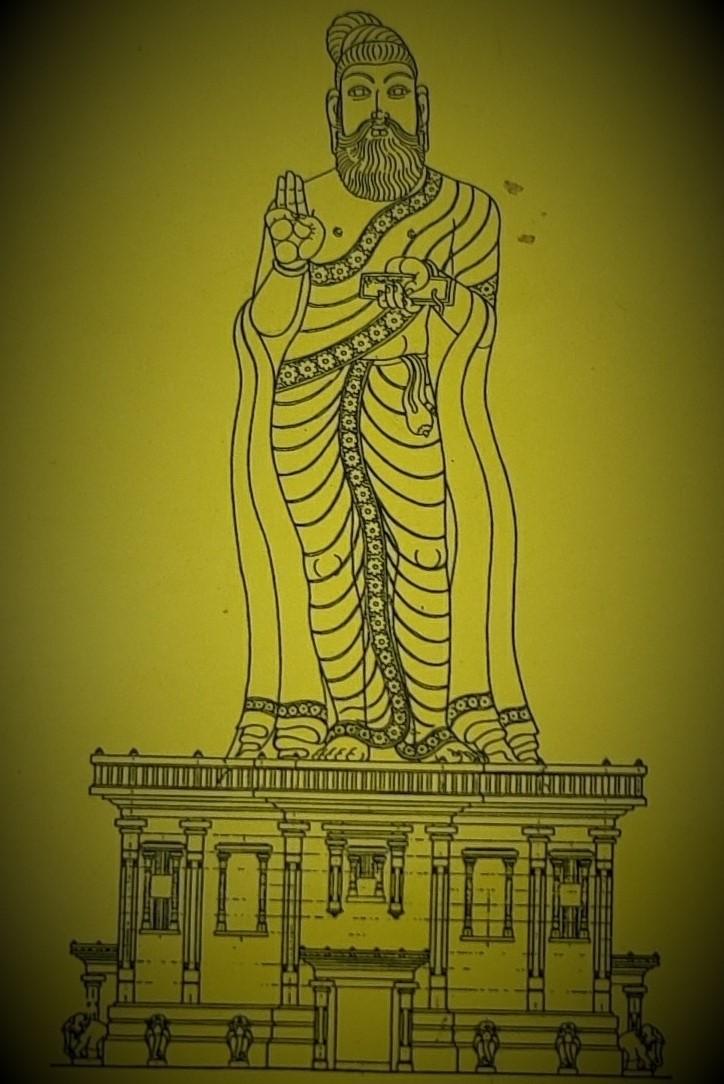 Civil foundation laying on the minor rock was another feature among various challenges to build the Valluvar statue. Expert team from the PWD was deputed to examine the rock and its strength to hold the 133 feet tall statue who confirmed that the minor rock is stretched vertically into the sea up to 200 feet and is perfectly fit to erect the stone statue.

Further, installing a statue measuring 95 feet tall on a minor rock in the mid sea is not possible because difficult to quarry huge sized stone, even if it is quarried transporting the stone from shore to the minor rock is risk oriented.

Hence, Dr. Ganapathi Sthapati proposed to build the statue on the minor rock with cut stones similar to building temple gopurams. In this way the built form would be proportionately sharing the load bearing with stability.  Building a statue with cut stones in the traditional technique of laying course-by-course will also withstand any natural calamity. This proposal was unanimously sanctioned by the expert committee from Tamil Nadu Government.

Traditional Science And Technology In Marking, Sculpting And Assembling Works

As per Sthapati’s proposal building Tiruvalluvar statue in complete round form was a thrilling project. The measurements adopted in the designing of the Valluvar statue are derived from Paramanu, the micro particle that floats in the space and which is not visible to human naked eyes. Our great maharishis calculated measurement from this Paramanu. The saints are the only persons who are able to visualise this micro particle. Mayamatha shastra quotes this as“paramaanur iti proktam yoginam drishti gocharam”. Based on our maharishi’s vision the following table of unit was prepared to derive the angula measure.

In vaastu shilpa tradition one viral/angula – the finger measure is considered as linear measure and is also called Taalam. It is a unique rhythm bound measure to calculate the dimensions for making sculptures.

In his works, Dr. Ganapathi Sthapati mentions that “Taalam Mukhamevacha” meaning the basic unit of one Talam is one face length, which is used in multiples or fractions to carve the  image proportionately.

There are ten types of Taalam applied in the making of various styles of sculptures. In the context of designing the Valluvar statue the renowned architect adopted the nine – nava Taala measure (excluding hair lock) which is the ideal human proportions. The following chart illustrates the application of Taala measure for Tiruvalluvar statue. 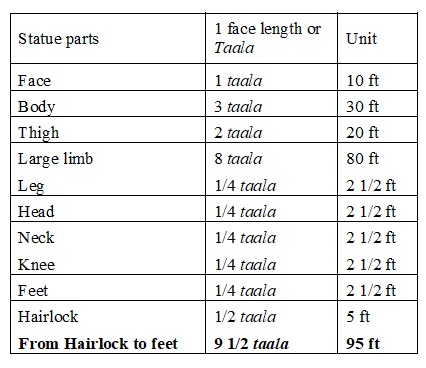 Saint Valluvar is designed in standing form with a slight bend from waistline to right leg. From architectural perspective this bend given to the leg remains unanswered question.

Dr. Ganapathi Sthapathi followed the shilpa shastra grammar while designing the statue’s stability.  During the sculpting of vigrahas three types of expressions are used to demonstrate the grace of an image. This expression is technically called Bhangam – flexion. There are three types of Bhangam – namely AA bhangam (one curve/flexion), Samabhangam (equal balanced position) and atibhangam (more than one flexion).

Saint Tiruvalluvar hails from a weaver’s tradition and his poetic verses are composed in a gentle and graceful manner. Based on this background, Sthapati selected AA bhangam posture– one curve flexion – to demonstrate Tiruvalluvar with grace, humbleness and politeness. Tiruvalluvar is set to hold the ten foot long palm-leaf  manuscript and his other hand has three fingers stretched upwards symbolically indicating the three aspects of Thirukkural – virtue, wealth and love.

Dr. Ganapathi Sthapathi technically used the flexion with one bend – AA bhangam as supporting element for the 133 feet tall statue along with an additional back support. 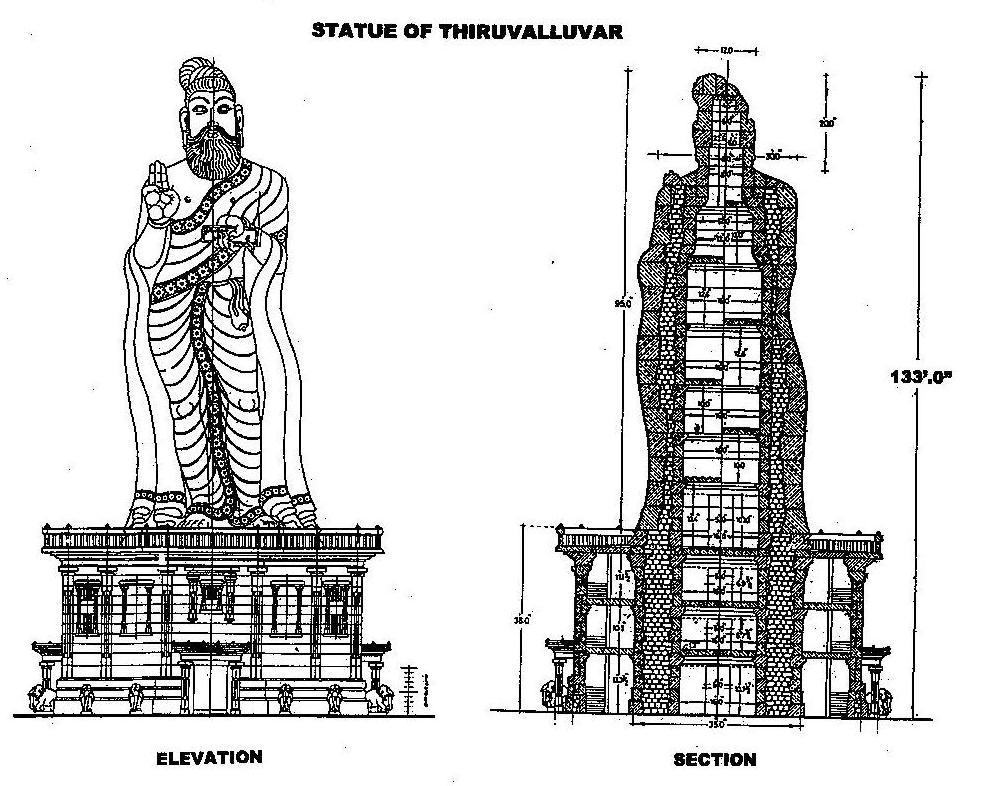 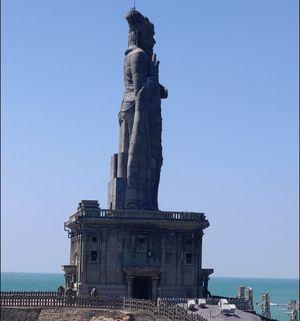 Based on the finalised design and dimensions, granite stones were quarried from Sirudhamoor and Pattumalai kuppam near Kanchipuram for the statue’s outer course stones. Ambasamuthram quarry was selected to quarry the inner stones of the statue and for the pedestal stones.

The statue parts were carved at Shollinganalur under the close supervision of Dr. Ganapathi Sthapati. A team of more than 250 shilpis of various capacities were deployed to work for this project.

For every course Dr. Ganapathi Sthapathi made a stucco model in actual size which later was replicated on the granite stone. This system was a successful method to render the Valluvar statue in form and with aesthetics.

Scaffolding was one more challenging task since it is a huge and very strong scaffold that was laid up to 150 feet high. There were tons of casurina and Palmyra post, heavy wooden planks and loads of coir to lay the scaffolding in the olden system.

It is interesting to note that apart from cranes to load and lift the heavy stones, huge ropes, chain pulleys of various sizes were also used to assemble the stones up to 133 feet high. 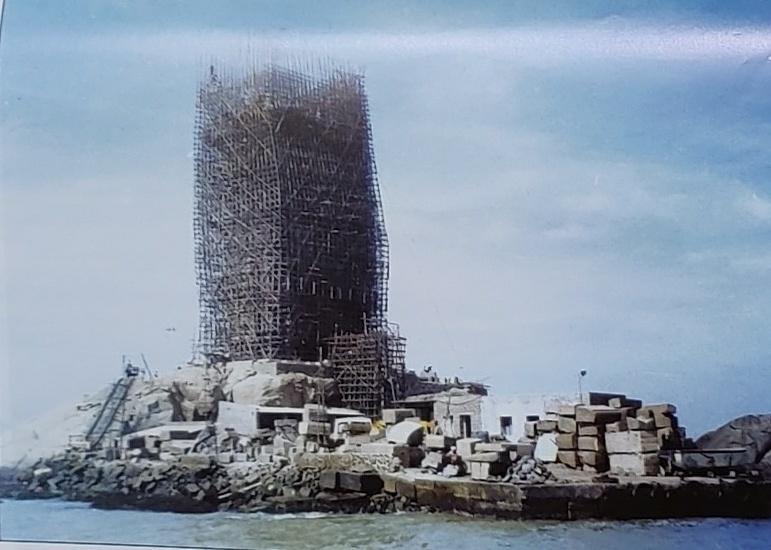 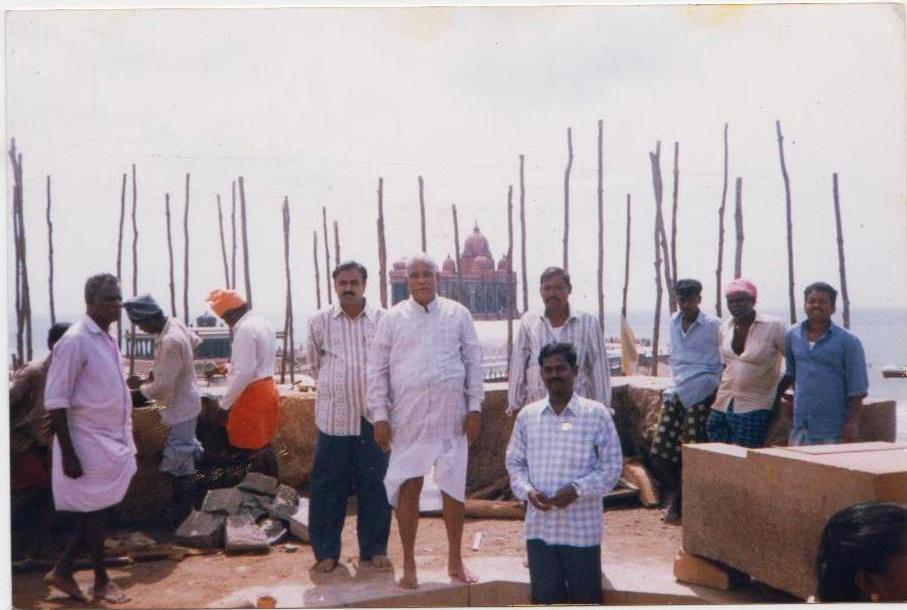 The pedestal and statue are made of 3681 carved stones, none weighing more than five tons. The total weight of built statue is 7000 tons. 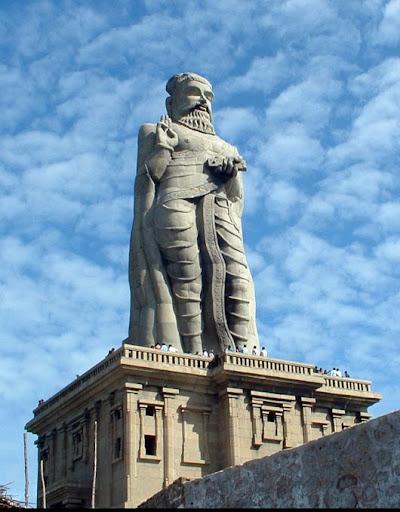 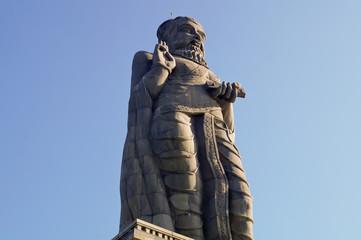 There are ten majestic elephants carved elegantly around the pedestal indicating the presence of ten directions including the space and earth which are considered sacred in Hinduism. 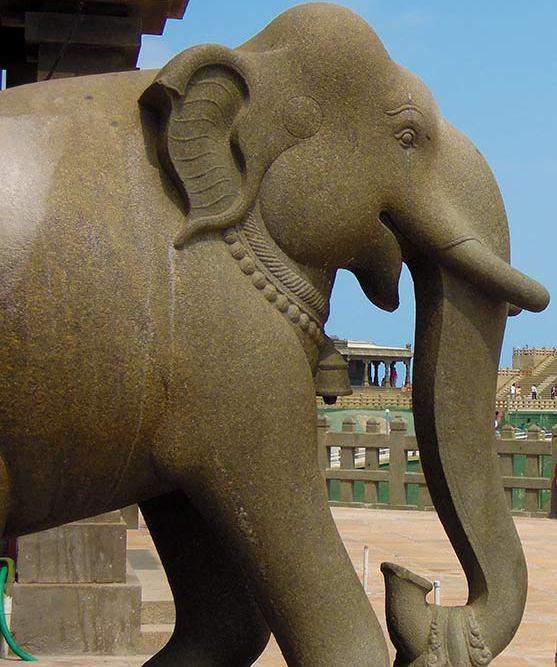 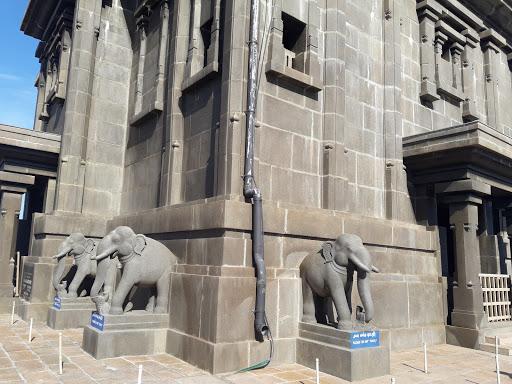 In ancient times, how did a Sthapati manage his team of shilpis in massive temple projects? This is mostly a question that has got different answers.

We all know that Human Resource Management plays a very important role in the current business scenario. The role of HRM in planning and managing the workforce leads to a successful method to achieve required output in a timely manner.

In the same way, our ancestors followed a system to manage work force in building huge temple structures from karshanadhi to Prathistathi that is from the soil excavation to completion of a Temple.

People think that several teams of Sthapatis are involved in building big temples that we see today. No, it is not, a particular stone temple is designed and raised by only one Sthapati as the chief architect just as they did in the olden days.  The Human Resource Management by the shilpa tradition is the main reason for our ancient temples to look unique in terms of workmanship, stability and style of architecture.

So, Dr. V. Ganapathi Sthapathi, the chief architect of Saint Valluvar statue had followed his ancestor’s methodology to manage shilpi workforce. He aligned the work force at three worksites – Shollinganalur-Chennai, Ambasamuthiram and Kanyakumari – in an efficient way to carve and assemble the 133 feet tall skyscraping statue on the minor rock in the middle of the sea.

The following chart is self explanatory to elucidate the management of workforce at various levels of carving and assembling work. 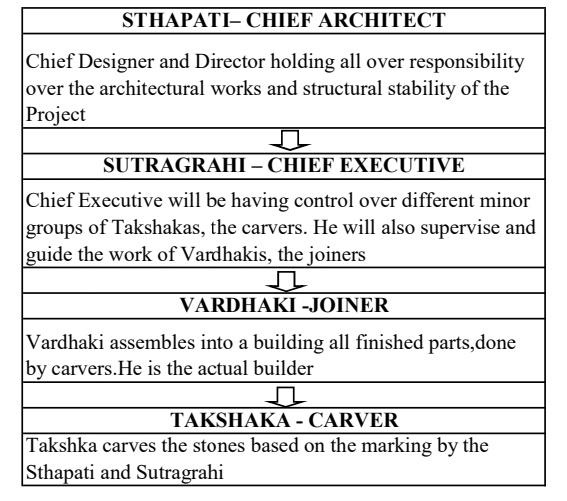 Based on the above system, the chief sthapati prepares actual sized marking of the structure of the statue course by course on the platform. Each course will be analysed and stone size will be decided and quarried. Thereafter all the stones will be carved at various capacities and later assembled course by course at the site. 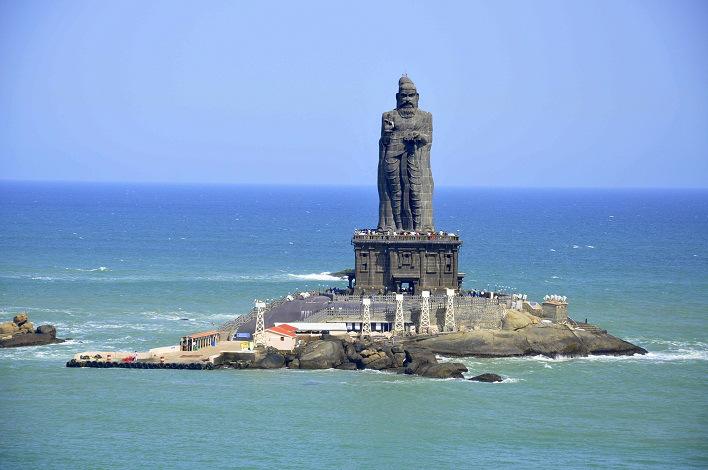 Statue of Tiruvalluvar colossal in size and built with 3681 pieces of carved granite stone is rare of its kind across the globe. This massive statue stood unaffected when the tidal waves of Tsunami on 26th December 2004 hit the Indian Ocean.

I am very delighted to share some of the secrets in the building of Tiruvalluvar statue by my grandfather, Padmabhushan Dr. V. Ganapati Sthapati in the august presence of esteemed scholars. There is no doubt that this massive structure of Saint Tiruvalluvar statue will represent the excellence of Vishwakarma in the crafts tradition. 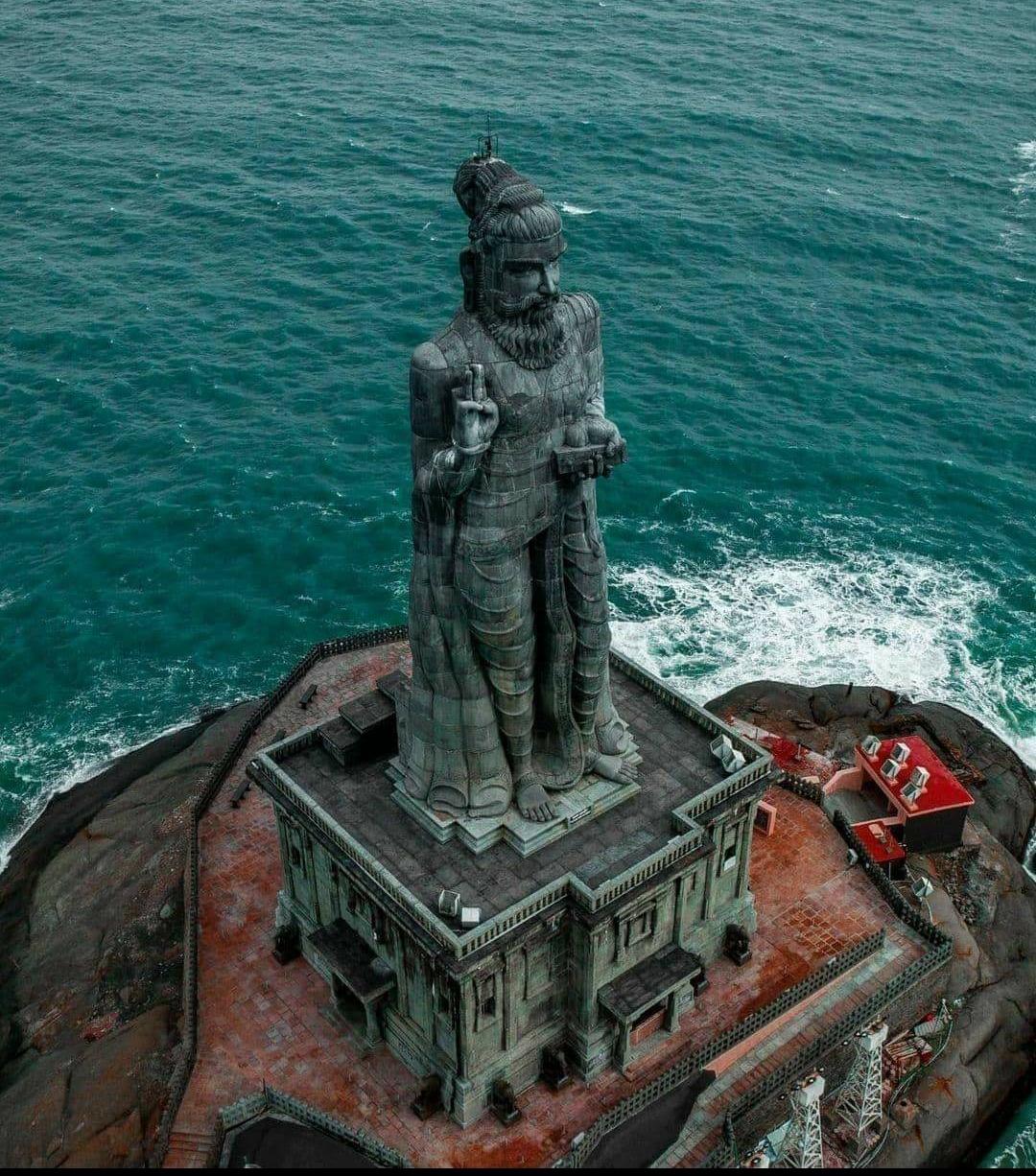 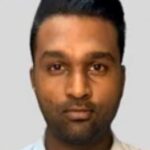