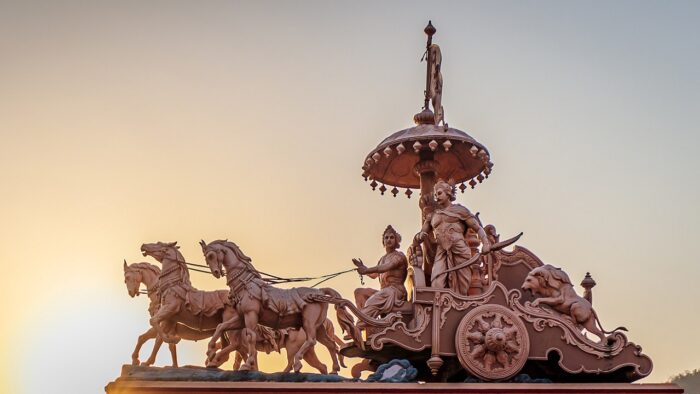 Meditation, as explained by the Merriam-Webster dictionary, means “spending time in quiet thought for religious purposes or relaxation”. This is open to interpretation, and there is a wide variety of meditative practices that are described in texts, as some traditions have been continued for generations or centuries, or even millenniums. Dhyāna is a term used in some traditions to describe the meditative practice. It has some variety in interpretation as well. 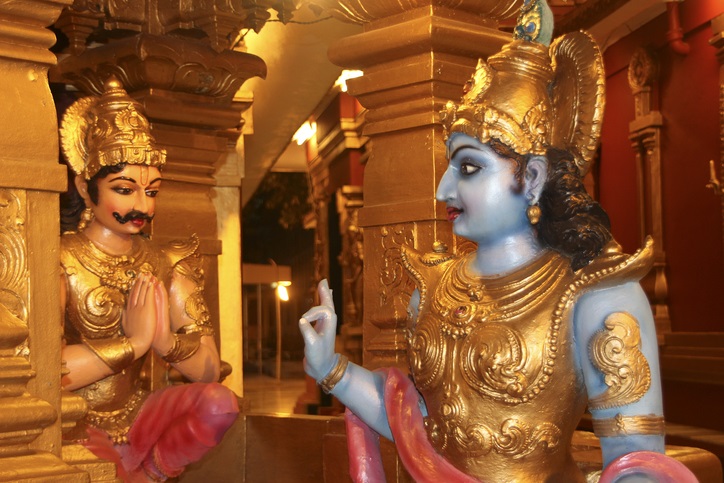 The Bhagavad Gītā, Chapter VI – Dhyāna Yoga describes meditation, as explained by Śri Kṛṣṇa. The context is the first day of the great war of the Mahabharata, to be fought between the Pāṇḍavas, and their cousins, the Kauravas. Family members, friends, preceptors and kings from the entire Indian subcontinent aligned themselves on either side. Faced with the prospect of killing his elders, relatives and gurus, the Pāṇḍava prince Arjuna was dejected, and he sat down in his chariot in confusion, despite being an accomplished military leader. The advice from his charioteer, cousin, lifelong friend and mentor, Śri Kṛṣṇa, serves as a universal, timeless guide. This dilemma of Arjuna is faced by each person at some point in life, when success comes with a high personal cost.

Śri Kṛṣṇa asks Arjuna to be a Yogī, who is successful at Dhyāna Yoga. He clarifies that a Yogī who has madgatena antarātmanā – the mind absorbed in me, śraddhā in me, and contemplates upon me, is the most exalted. Here, the “me” reference is not to the individual human form of Śri Kṛṣṇa, but to the Consciousness he personifies, the Self. The identification of the Yogi with the Self, is Dhyāna Yoga – the means for liberation. 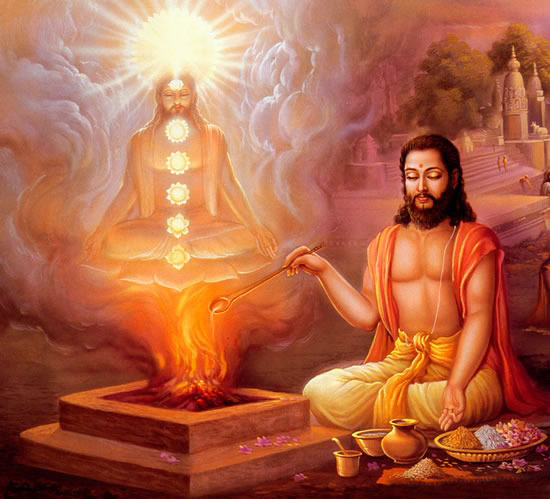 The qualifications of the Yogi are – rising above desire, mastery over the senses and memory to keep a composed mind under favorable and unfavorable circumstances, and looking at all with an equal eye. Such a person as the dhyātā – meditator, staying solitary in a secluded place to perform Dhyāna Yoga, with a constant focus on the dhyeya – the object of meditation, will be united with the Self.

The method for meditation is outlined. The meditator needs to be established on a firm seat, not too high or too low, in a clean spot, on a soft cloth over a deer skin over dry grass, with single-pointed mind without any agitation. The meditator needs to sit firmly with the head, neck and body in a straight line, as if looking at the tip of the nose, withdrawing the mind from all else, and concentrating on the Self alone. Such a meditator should eat, sleep and exercise in moderation.

It is emphasized here that no effort is needed in Dhyāna Yoga, except freeing oneself from the impediments to Dhyāna. To that end, the Yogī minimizes external distractions, and masters the mind. The unsteady mind has to be mastered through abhyāsa – practice, and vairāgya – dispassion. Abhyāsa trains the mind to deal with pain and unpleasantness, while vairāgya is practiced to detach the mind from pleasantness. One of the approaches to master the mind could be Japa – the repetition of a word or phrase or mantra, that keeps the mind from flitting from the object of meditation. The meditation is successful when there is no longing for objects. In the absence of longing, the meditator revels in yoga-sukha – the happiness on the seat of meditation. 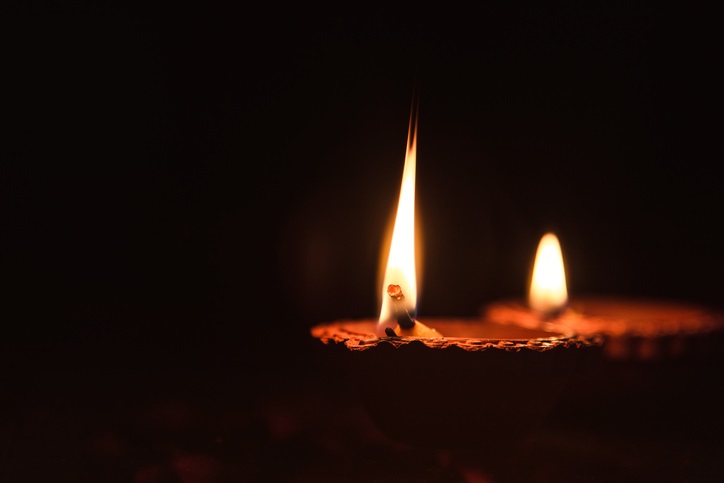 (Figure 3: Credit: Istock-The mind of a Yogī should be like a steady flame of lamp in a gale)

The mind of a Yogī is compared to the steady flame of a lamp protected from the wind. The ignorance of individuality and separateness is removed as the Yogī’s attention is not thoughts, but the basis of all thought. The knower, the knowledge and the known merge as the Self, the Ātmā – the consciousness. Everything in this world needs validation of its existence from pramāṇa – valid means of knowledge. Ātmā alone is self-existent and self-evident. Once the mind abides in the Self, the Yogi sees the sameness in all. The timeless all-pervading Self does not exist in time and space, but time and space exists in the Self. Śri Kṛṣṇa has said that the uttama sukha – ultimate happiness, is reached through Dhyāna.

Dhyāna is superior to other previously described paths in the Bhagavad Gītā. Karma Yoga is the path of action by renouncing the results of action, removing the doership and enjoyership from action, and performing the right action without a need for personal gratification, with a composed mind that is unswayed by rāga-dveśa – personal likes and dislikes. Karma Yoga is a preparatory step for śuddhi – purification of the mind. A mind that is shielded from sense-stimuli, can still be distracted by memory. Beyond the śuddhi, is viśuddhi – release from the impressions of past experiences and memories.

And, total renunciation comes only from Jnāna Yoga – the path of knowledge. The jnāna-vijnāna-tṛpta-ātmā- one whose mind is content in the knowledge of the Self, has jnāna – knowledge, and vijnāna – assimilated insights that come from the practice of constant manana – analysis, and nididhyāsana – contemplation.

A person with such a tranquil mind, who has conquered the senses, and who regards gold and a clump of clay equally, has developed sambuddhiḥ – an equal eye for all, and is the most exalted being, a Yogī.

What happens to a person who is not successful after this meditative practice? Such a person would be re-born in a conducive environment to continue the pursuit of happiness and spiritual fulfillment. The person who practices Dhyāna Yoga is on a path of no return. There is only progress towards liberation and Self-realization. Such a person can live in the world, performing duties without personal motives, with an equipoised mind that deals with all situations, while inwardly focused on the Self. 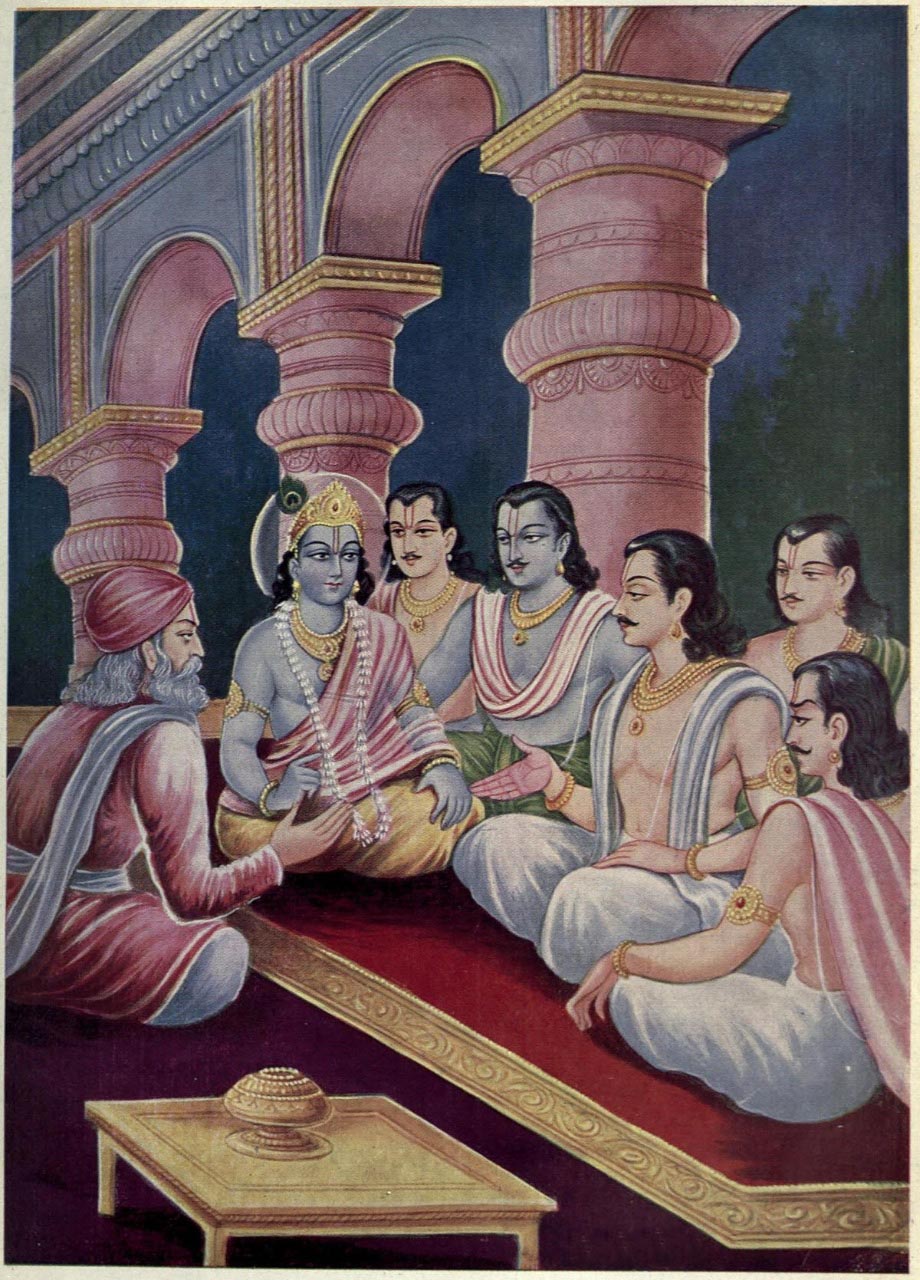 Dhyāna Yoga is also described in various conversations in the epic, the Mahābhārata, of which the Bhagavad Gītā is a part. Before the battle, in Book V – Udyoga Parva – the Preparation for War, we come across the blind king Dhṛitarāṣṭra who supported his son’s claim to the throne to the detriment of his nephew Yudhiṣṭhira, the rightful heir. Dhṛitarāṣṭra, now fearing for the life of his family members, asked his counsellor Vidura for advice. Vidura thought of the sage Sanatsujāta with reverence, and that accomplished sage understood the need of the moment, and appeared in the court of Dhṛitarāṣṭra.

One of the questions asked by Dhṛitarāṣṭra was whether Dharma would be destroyed by unrighteous acts, or whether Dharma puts an end to unrighteous acts, considering that there were those who were guided by Dharma, and those who did not live righteously. The sage replied that a person constantly contemplating the Self would rise above previous unrighteous actions. There are those who repeat the cycle of sense-driven and desire-filled actions and consequences in multiple births. And, those who renounce the fruits of their action, disidentify with the doership and enjoyership of action, turn inward in contemplation upon the Self, and even perform their worldly duties while silently abiding in the Self, will attain liberation.

The sage further explained that the study of the Vedas to become a scholar cannot be a goal in itself. The Vedas are for guidance, imparting the knowledge of the Self, that needs to be contemplated upon and internalized. Among Tapasvīs, those who perform meditative practice without worldly goals are higher than those who perform tapas for worldly achievement. And, the most exalted is the one who is never separate from the Self. This is aligned with the explanation of Dhyāna Yoga, and the Yogī’s abidance in the Self, given to Arjuna in the Bhagavad Gītā. 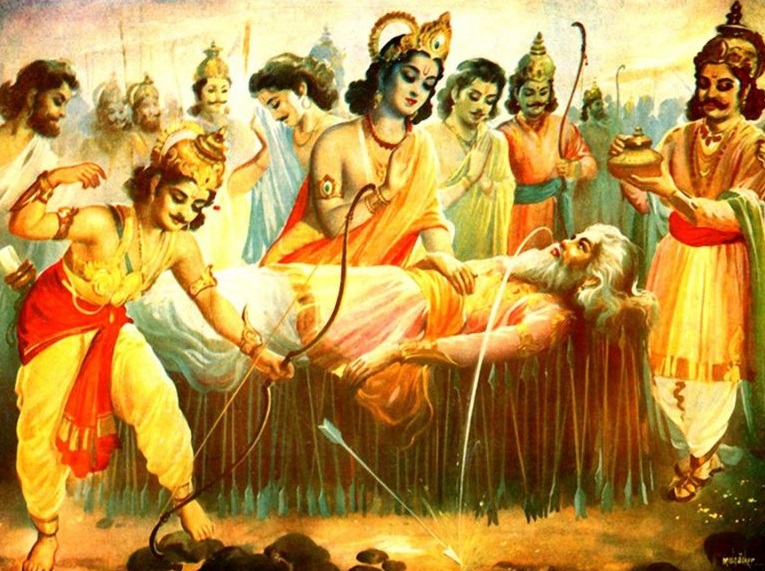 After the war, the conversations of the eldest of the victorious Pāṇḍavas, Yudhiṣṭhira, with his great-uncle Bhīṣma, lying on a bed of arrows in the battle-field, are described in the Mahabharata, Book XII – Śanti Parva.

Bhīṣma educated Yudhiṣṭhira on a variety of topics like administration, law and order, social order and many other topics including Sānkhya and Yoga. A person should eat and sleep in moderation, perform desireless action, keep a mind composed in favorable and adverse situations, and attain mastery over his senses and mind. He should develop viveka – discrimination, and vairāgya – dispassion through withdrawal from worldly attachments and aversions, and perform the right action in the spirit of service without expectation of results. The attainment of knowledge needs to be enhanced with contemplation for understanding and absorption.

A Yogī needs to live a life of strict discipline, maintain purity of mind, and meditate upon the Self with concentration. He will be rewarded with illuminating knowledge of the Self, and attain mokṣa – liberation.

Just as the Bhagavad Gītā can be seen as a metaphor for any person facing a challenging situation in life and wondering how to move forward, the narrative of the prince Yudhiṣṭhira in the Mahābhārata is the metaphor for the journey of the Yogī. Being the rightful heir to the kingdom, he faced several challenges just like a Yogī in the initial stage of meditation trying to stay composed in adverse circumstances. Having once become a king, he again got cheated of his kingdom in a rigged game of dice and lived in exile, like a meditator who may have reached samādhi, and seen a glimpse of yoga-sukha, but is now back in the world. The training and acquisition of divine weapons in the preparation for war to win back the kingdom is similar to the meditator’s rigor and discipline in life, and attaining mastery over the mind and the senses, while staying focused on the goal of identifying with the Self. The ultimate coronation of Yudhiṣṭhira as the rightful king, is the Yogī’s Self-realization. 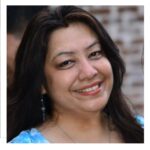 Neeraja Sheth has worked in senior executive positions in Information Technology and Consulting, responsible for multimillion dollar global initiatives. She has a Bachelor’s degree inRead more