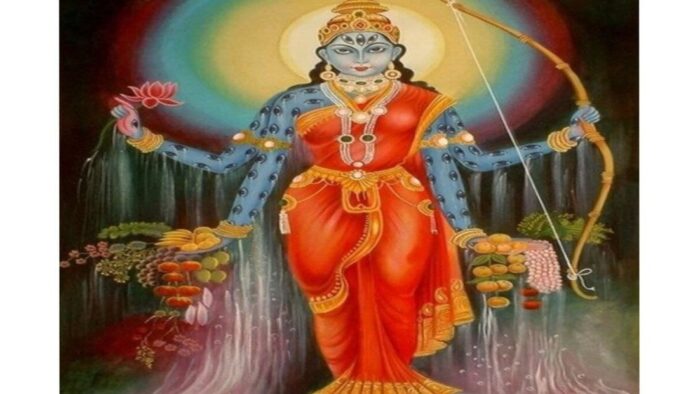 Meditation, Devotion, and Connection…. The rendezvous of a soul to the highest consciousness, the nurturing of the soul by muzzling the mind, awakening and embracing the light, overcoming emotional depths, and conquering the dark. The ultimate goal of a soul is to bask in the glory of its deity and drown in their reverence.

The nourishment of a soul can be contented by the dip of devotion but the evolutionary imperative of a body addicted to materialism, attached to desperation to exceed, disquietude to produce and possessions, also needs an enrichment to classify and protect itself from all the worldly evils.

The paramount feature of human existence is “food” and the dishonor to our progressive race is “starvation”. But the divinity of Goddess Durga wards off the diabolic masquerade of avarice, obscurity, and emptiness.

Maa Shakambhari devi is the third form of the Mother as depicted in the “Murti Rahasyam” part of “The Devi-Mahatmyam” prevalently known as- “Sri Sri Durga Saptashati/Sri Sri Chandi”. Maa Shaakambhari Devi, an incarnation Adi Parashakti Chandika, is believed to nourish the human race by bringing (ambhari) vegetation or herbs (shaaka), which is why she is also known as Vanashankari or the Goddess of the forest. She is explicitly evident in the floras, especially in the forest, protecting people in all places, deterring all sorts of vulnerability to mankind, and so people pray to her for safe passages through forests, especially at night.

Banashankari Devi Temple  or Banashankari temple is a Hindu shrine located at Cholachagudd near Badami, in Bagalkot district, Karnataka, India. The temple is popularly called Banashankari or Vanashankari since it is located in the Tilakaaranya forest.

The original temple was built by the 7th century Kalyani Chalukya kings, who worshipped goddess Banashankari as their tutelary deity.

A goddess with one hundred eyes, Maa Shaakambhari Devi is proudly hailed as Shataakshi because Maa sees all things.  She is called Durga because she protects the devotees by removing all difficulties.  She is also called Uma (She who Nourishes, Calms, and Supports), Gauri (She who is Brilliant Illumination), Sati (the Source and Embodiment of Truth), Chandi (She who is Fierce and Intense), Kaalakaa (She who is Darkness destroying all difficulties), and Paarvati (the Goddess of the Mountains / Mother Earth).

Shaakambhari Devi is meditated on having a beautiful blue-colored body and eyes like blue lotuses.  She sits on a lotus and carries a bow and arrows, a lotus, grains, flowers, leaves, sprouts, roots, herbs and medicines, fruits, and an abundant pile of vegetables. Her form removes hunger, thirst (desire), and the fear of death.

“Grain”, which is directly proportional to wealth and nourishment is the quintessence of prayers fulfilled by the deity on Her devotee. Maa Shakambhari Devi holds the perseverance to bestow immortality and eternal bliss on Her devotees. The spiritual ethnicity and the righteous dedication of a devotee will never be disheartened and disowned by the Mother Goddess.

The dominance of “mantras” chanting and Meditation of Maa Shakambhari Devi are believed to provide shield, obviate susceptibility, eliminate physical and emotional battles, guidance against the forces of darkness, reward sustenance, richness of heath (grains, vegetables, fruits, flowers, roots, medicines, food and drink) and prosperity of wealth, serenity and divinity.

Maa Shakambhari Devi’s mantras have the cosmic relevance to evoke inner confidence and happiness to the power if eternity. Emanating and possessing the supremacy of the mantras of Goddess Durga and of all the ten of the “Dasha Maha Vidyas” (Great Wisdom Goddesses) who are said to have been generated from Shakambhari Devi. Devotees chant the mantras of the Maha Vidyas to overcome all difficulties indicated by the nine planets or the rising sign in a person’s birth chart, so the mantras of Maa Shakambhari Devi fulfill this purpose also and help in the nourishment of all living creation with spiritual fulfillment.

“One should next proceed, O king, to the excellent spot of the Goddess celebrated over the three worlds by the name of Sakamvari. There, for the space of a thousand celestial years, she of excellent vows, month after month, had subsisted upon herbs, O king of men! And attracted by their reverence for the Goddess, many Rishis with wealth of asceticism, came thither, O Bharata. and were entertained by her with herbs. And it is for this that they bestowed on her the name of Sakamvari”

The Story Of Shakambhari Devi is narrated in Skandha 7 – Chapter – 28 of Devi Bhagavata Purana – On the glory of the Śatakṣi Devī.

A cruel Danava named Durgama, son of Ruru was born in the family of Hiraṇyakṣa.
Duragama basking in his devilish pride thought of conquering and destroying The Vedas- the strength of the Devas and start worshipping Brahma (the four faced lord, the one who wrote the four Vedas)

For one thousand years he engaged himself in rigid austerity that fetched great amount of displeasure and agitation amongst the Devas, the Asuras and all the Lokas were shaken by the power of his Tejas (fiery lustre).

On witnessing his penance, lord Brahma approached Durgama to grant his boon to conquer the Vedas.

From that time, the Brahmaṇas forgot all about the Vedas. All the Sanctum Santorum rites and rituals became extinct.

On the disappearance of Vedas tumultuous culture captivated Mother Earth. The gods became weaker and the Demons had infested the city of Amaravati. The incompetent battle between the wilted Devas and the mighty Asura made the Devas take refuge in the caves of the inaccessible passes of the mountain Sumeru and began to meditate, chanting and praising the hymns of Mahesvari, the Highest Force, the Great Goddess.

She created innumerable eyes within Her body and became evident. Her colour was dark-blue (colour of the space, the fourth dimension,) like heaps of collyrium (medicated eyewash); eyes like the blue lotuses and expanded; breasts hard, regularly elevated round and so fleshy that they touched each other; four-handed; with Her right hand, holding arrows; on the underhand holding lotus; on the upper-left-hand holding a great bow and on the lower hand, carrying vegetables, fruits, flower and roots with abundance of juice, destroying hunger, thirst, and fever.

She was the Essence of all Beauty, lovely, luminous like the thousand Suns, and the ocean of mercy. That Upholder of the Universe, showed Her form and began to shed waters from Her eyes. For nine nights continuously, the heavy rains poured down out of the waters flowing from Her eyes. Seeing the misery of all the people, out of pity, she rained continuously tears from Her eyes; satiating all her devotees. The magnificence of this event led rivers flow out of Her tears.

This Temple is considered to be the place where Devi did Tapasya to defeat Durgamasura.  It is considered a special Kshetra and is perhaps the most ancient Temple dedicated to Maa Shakambhari Devi.

Banashankari is considered as the incarnation of goddess Parvati, who is the consort of god Shiva.

According to legend when Sage Agastya was forced to leave Kashi, he was troubled, and so Vishvanatha, the Lord of Kashi instructed him to worship at Kolhapura where Vishvanatha is embodied in the form of Maha Lakshmi. Pleased with the Sage, the Goddess instructs him to worship at Tilakaranya where she is embodied in the form of Vanashankari.  Worshipping Goddess Shakambhari Devi at this site, Sage Agastya is allowed to return to Kashi.

There are several Major Temples for Shakambhari Devi (or Vanashankari as She is known in the South) throughout India. 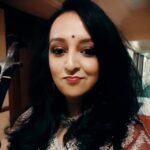