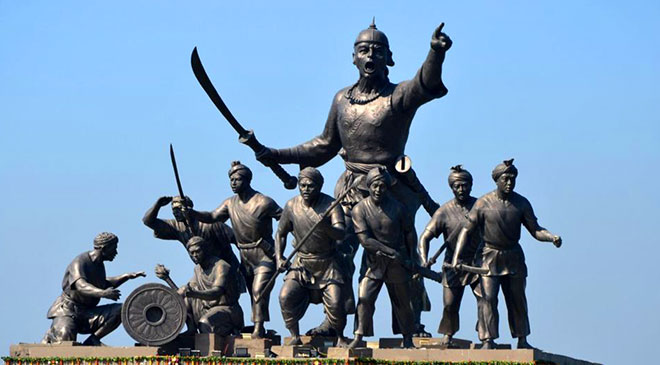 The famed historian and scholar Sitaram Goel once stated:

Hindu Dharmashãstras have enjoined upon every Hindu to repay according to his or her capacity the rishi-riNa, that is, the debt we owe to our seers and sages, by passing on to the next generation the Veda and the Itihãsa-PurãNa, that is, the spiritual and cultural vision of Sanatana Dharma and the historical tradition of Hindu heroism…

It is to keep up with that noble tradition, we see 24 November being celebrated each year as Lachit Divas (Lachit Day) statewide in Assam where they commemorate the heroism of  Lachit Borphukan. This valiant warrior who successfully repelled the forces of the Moghul Army and curbed the expansion of the Moghul Empire further east is known only within Assam. A brief sketch of his life and glorious feat is given in this essay.

Lachit Borphukan was born around early seventeenth century to Momai Tamuli who was the first Borbarua that is the ‘Governor of upper Assam and Commander-in-Chief of the Ahom army’ under the Ahom King Prataap Singha. As was the tradition in Ahom society, the young Lachit was taught philosophy and arts besides being imparted military skills.

Through hard work and dedication he was considered for appointment to the position of a Soladhara Barua (scarf-bearer) of the Ahom King. That position was the modern day equivalent of a principal secretary. Gradually Lachit was given other important positions such as the Superintendent of the Stable of Royal Horses (Ghora Barua) and Superintendent of the Royal Household Guards to the Ahom king Chakradhwaj Singha.

King Chakradhwaj Singha impressed by the attentiveness of Lachit promoted him to be one of the Borphukhan. In the Ahom system of governance Borphukan was one of the five patra  mantris (councilors) who possessed both executive and judicial powers. 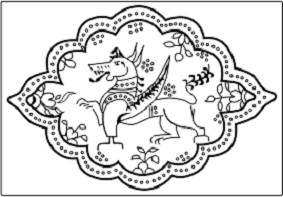 During the said time, the Mughal Empire was one of the largest empires in the world with a strong army and ruled over a large part of India. The idea that such a strong army could actually be defeated was considered both impossible and irrational. But a host of heroes like Shivaji, Raja Chhatrasal, Banda Bahadur and Lachit Borphukan proved it otherwise.

During the dark days of Aurangzeb’s tyranny, bravehearts like Lachit Borphukhan and Shivaji showed us why our civilization has survived all sorts of onslaught.

Even when the Mughal Empire was at its zenith, the region of Assam and present-day North-East was untouched by them. The valiant Ahoms had successfully repulsed frequent attacks on their homeland from the time of Muhammad Ghori  on no less than seventeen invasions. This was an anomaly that the most barbaric emperor Aurangzeb wanted to change. As a result, repeated attempts were made to capture Assam.

During a brief period when the Ahom kingdom was facing internal discord, the Mughals took advantage and captured Guwahati with the aim to take over more territory in Assam. However, they were badly defeated in the Battle of Saraighat in 1671, and their dreams of capturing Assam remained unfulfilled.

The battle of Saraighat was fought on the banks of the Brahmaputra in the Guwahati region. Due to his recognition as an expert strategist, the Ahom king selected Lachit Borphukhan to be the Commander-In-Chief. The Ahom army led by the brave Lachit Borphukan used tactics like guerilla warfare and clever choice of terrain to attain victory in a battle that they had little chance of winning.The following extract from this piece gives an outline of the famed battle:

The Mughals got bogged down in mud and got isolated from each other due to flowing streams. The Ahoms were at an advantage. They were more used to the terrain and accustomed to the climate. They carried out extensive guerilla warfare, causing heavy losses to the Mughals. Ram Singh was very contemptuous of these operations and called it a “thieves affair”. He challenged Lachit Barphukan to a duel. He also offered a bribe of 3 lakhs to Lachit to abandon Guwahati defenses. When this did not work, he tried a ruse.

A letter addressed to Lachit, attached to an arrow, was host into the Ahom camp. It mentioned that Lachit had been paid one lakh to evacuate Guwahati and urged him to do so soon. The letter found its way to the Ahom King at Gargaon who became suspicious of the loyalty of Lachit Barphukan. Fortunately, the Prime Minister managed to convince the King that it was a trick being played by the Mughal Commander and he should not doubt Lachit’s loyalty. However, the King insisted that Lachit came out of his defenses and engage the Mughals in battle on open ground. Despite his objections to such a suicidal move, Lachit was forced to follow the order of the King. He came out of his defenses onto the Allaboi plains to attack the Mughal army in the open. This was the fourth phase of the battle.

After some initial success in which the Ahoms captured the local Mughal Commander, Mir Nawab, the Ahoms drew the full weight of Mughal cavalry personally led by Ram Singh.

The valiant Ahoms had successfully repulsed frequent attacks on their homeland from the time of Muhammad Ghori on no less than seventeen invasions.

At a crucial stage of the battle, Lachit had fallen very ill and was asked by the physicians to not go out in the battlefield. The advance of the strong Mughal army and Lachit’s failing health was dispiriting the morale of the Ahom army. But Lachit realized that his duty to protect his people was far more important than his health. It is recorded that he said:

“When my countrymen are suffering from invasion, and when my army is fighting and sacrificing its life, how can I think about resting my body due to a mere illness? How can I think about going home to my wife and children when my entire country is in trouble?”

Knowing that it would be difficult for him to fight on land, the brave Borphukhan asked that seven boats be brought to him loaded with bows and arrows. He dressed for war and got ready to attack from the river. 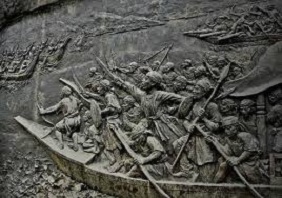 The Mughal army faced a sudden stream of attacks from the riverfront coupled with the charging of Ahom warriors who inspired by Lachit’s gallantry fought till their last breath. As a strategic move, Lachit had earlier taken the precaution of digging a line of defenses at the back of the advancing army to which they could fall back if forced to do so. After facing massive casualties the confused and beleaguered Mughal army was forced to retreat.

Shortly after the war, Lachit Borphukan breathed his last. Even today we see the pristine culture of Assam being intact because it never faced the brutish invasion of the Islamic tyrants. During the dark days of Aurangzeb’s tyranny, bravehearts like Lachit Borphukhan and Shivaji showed us why our civilization has survived all sorts of onslaught.

But unfortunately, like with Sankardev, this great treasurehouse of bravery hailing from Assam has not been given his due. If we follow the maxim of Sitaram Goel , Lachit Borphukhan’s name should be taught at all Indian households like that of Shivaji and Banda Bahadur.

(This article was published by IndiaFacts in 2014)