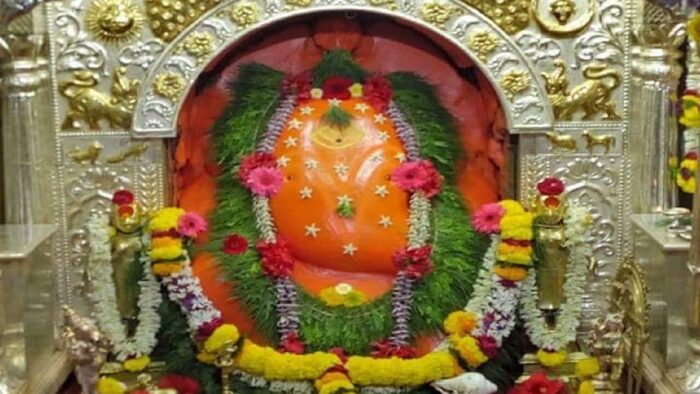 According to the Gaṇeśa Puraṇa, Sri Gaṇeśa was incarnated as Mayūreśvara, possessing six arms and a white complexion, with a peacock as His mount. He was born to Shiva and Devi Parvati in the Treta Yuga, with a divine purpose to kill the demon, Sindhu. Sindhu was the son of Cakrapāṇi – the king of Mithila and his wife Ugrā.

Ugrā had conceived a son by the power of Sūrya-mantra, but unable to bear the extreme heat radiating from the foetus she was forced to abandon it in the ocean.  Soon, as it was destined, a child was born from this forsaken foetus.  The ocean then returned him to his grieving father Cakrapāṇi, who named his Sindhu, after the ocean.

As he grew, Sindhu began worshipping Lord Sūrya, as directed by his parents. Sindhu received a never-exhausting bowl of amṛta (elixir of life) as a boon from the Surya devata. The demon was, however warned that he could drink from the bowl only as long as it was intact. In order to protect the bowl, the lobhyukta demon swallowed it. Considering himself invincible, Sindhu began terrorizing the three worlds to such an extent that even Lord Brahmā, Lord Viṣṇu, and Lord Maheśa had to leave their respective lokas and take refuge at the Āśrama of sage Gautama at Trisandhyakṣetra (Trayambakeshwar). As advised by Lord Śiva, Mātā Pārvatī underwent austerities meditating on Gaṇeśa – “the supporter of the entire universe” – for twelve years at Lenyadri (another Aṣṭavināyaka site, where Gaṇeśa is worshiped as the son of Pārvatī). Pleased by her penance, Gaṇeśa blessed her with the boon that he would be born as her son.  This is celebrated as “Umāṅga-Malaja” Janmotsav on Kārtika Śuddha Chaturthi.

Meanwhile terrorized by Sindhu, the devatas and Mātā Pārvatī again approached Mahādeva as to when Lord Gajanan would be born and what was needed to be done so that He incarnates early? Mahādeva advised Gaṇeśārādhana to all. Mātā Pārvatī and all the other devatas made Pārthiva Gaṇeśa Vigraha (earthen images of Gaṇeśa) and worshipped Him from the Chaturthī of the bright fortnight of the Śrāvaṇa month.  After a patient wait of a month, Lord Gajānana incarnated as Mayūreśvara on the auspicious day of Bhādrapada Śukla Chaturthi under the Svāti nakshatra at midday (madhyāhna-kāla). He defeated Sindhu’s army, severed Kamalāsura into three pieces, thereafter cutting open the body of Sindhu and emptying the bowl of amṛta.  Finally the demon was slayed.

Brahmā is said to have built the Morgaon shrine and conducted the marriage of Siddhi and Buddhi with Gaṇeśa. At the end of this incarnation, Gaṇeśa (Sri Mayūreśvara) is said to have returned to his celestial abode, giving his peacock mount to his elder brother Skanda, with whom we see the peacock vāhana being generally associated. Since Gaṇeśa rode a peacock (Mayūra in Sanskrit; mor in Marathi), he is known as Mayūreśvar or Moreśvar (“Lord of the peacock”).

Another legend says that this place was populated by peacocks giving the village its Marathi name, Morgaon (“village of peacocks”), and its presiding deity the name Moreśvara.

A Gāṇapatya legend recalls how Brahmā- the creator, Viṣṇu- the sustainer, Śiva – the destroyer, the mother goddess and Sūrya- the sun meditated at Morgaon to realize their Creator and the very purpose of their existence. Gaṇeśa appeared before them in the form of an effulgence of Omkāra and blessed them.

Another legend records that Brahmā himself was overcome with desire upon creating Kāma and grew desirous of Sarasvatī (the Goddess of learning). In order to redeem himself from this sin, Brahmā bathed in the sacred waters of river Turīyā that was invoked by all the deities. Brahmā, then came to Morgaon to worship Gaṇeśa, carrying water from the river in his kamandal.  While entering the Gaṇeśa shrine, Brahmā stumbled and the water fell from the pitcher. When Brahmā tried to collect it, it was turned into a sacred river named Karha, which still flows through Morgaon.

The Purāṇas also describe how Lord Kṛṣṇa was once subjected to a false accusation for accidentally seeing the Moon before performing the Bhādrapada Śukla Chaturthi pooja. As per legends, there lived a king named Satrājit who belonged to the Somavamsha (Lunar) race who  received the Shyamantaka mani from Lord Sūrya. Satrājit took the Shyamantak mani to Dwarka to show it to his dear friend, Lord Krsna. Lord Krsna fell in love with the mani and asked his friend for the same so that He could adorn the gem on his Crown. Satrājit, unfortunately, refused to do so. Later on, Satrājit’s brother Prasenajit went to the forest for hunting, taking the gem along with him. A lion attacked him and took away the gem. The lion, in turn, was attacked by Jāmbavant, the king of bears, and once again the gem changed hands, with Jāmbavant possessing it now.

However, it was Śrī Kṛṣṇa who was accused of having plotted to kill Prasenajit, just to get his hands on the beautiful gem. Śrī Krsna pondered as to why this had happened and it was revealed to him that this was due to the curse of Lord Gaṇeśa that – “whosoever looks at the moon accidentally or deliberately on Bhādrapada Śukla Tṛtīyā and Chaturthi will be accused of doing something he has not done” To overcome this and to absolve himself from this curse, Lord Krsna performed Śrī Pārthiva Gaṇeśa Pujā as an expiation. Pleased with his devotion Śrī Gaṇapati blessed him to be redeemed from the curse soon.

Thereafter, Śrī Kṛṣṇa reached the cave of Jāmbavant, upon finding the lion that had killed Prasenajit who in turn was killed by the bear. After a long combat with Śrī Kṛṣṇa lasting for many days, Jāmbavant acknowledged the strength of Lord Krsna and as a recognition of his valor and greatness, offered not only the Shyamantaka mani, but also his daughter Jāmbavatī in marriage to Śrī Kṛṣṇa. Lord Krsna returned the Shyamantaka mani to Satrājit and got himself freed from the infamy.

From the above citations, we understand that Mātā Pārvatī was the first to perform Śrī Pārthiva Gaṇeśa pujan and the legend dates back then. This is precisely the reason why we celebrate Bhadrapada Shudha Chaturthi. The vrata begins on Pratipada, and Pārthiva Gaṇeśa puja is performed on Chaturthi at midday.

The Śāstras prescribe the preparation of clay idols personally in our own homes for being worshipped on this day. Some people perform the pūjā on the silver or bronze idols kept at their homes for daily worship. However, prāṇapratiṣthā should be done only on Pārthiva Gaṇeśa and the idol must be immersed in flowing waters after uttaradhana on the eve of Bhādrapada Śukla Panchami. This Pārthiva Gaṇeśa pūjan has seen a paramount leap in modern times and is celebrated for 10 days as an Utsava, however, we have no such reference in Gāṇapatya sampradaya and Śāstra. Idols made up of materials such as plaster of paris etc., are neither prescribed in the Śāstras nor are in sync with Mother Nature. We must therefore try to make our own Shri Pārthiva Gaṇeśa on Bhādrapada Śukla Tṛtīyā and perform the worship on Chaturthi between 11.30 am to 1.30 pm. May we all be blessed with His Abundant Grace and Karuna.