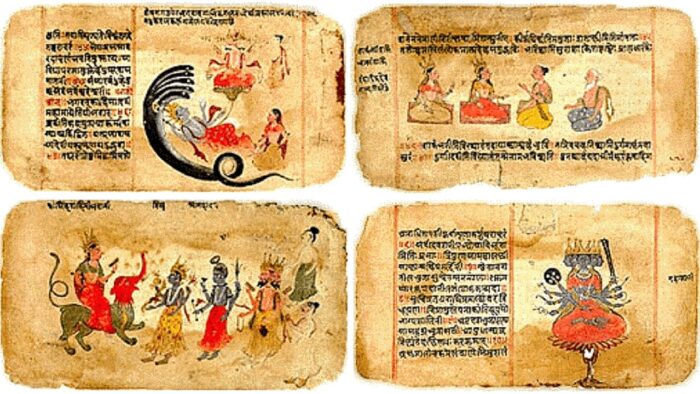 The Hindu tradition lays great stress on the study of scriptures. It is considered a religious duty for Hindus to study and recite their scriptures on a daily basis, if possible. In particular, Hindu priests are required to recite their own designated group of scriptures (called ‘svādhyāya’) every day, and even multiple times every day because that is what grants them the status of priesthood.

Shruti and Smriti are the two eyes of Brahmanas. He who is bereft of one is one eyed, and if bereft of both, is completely blind – thus it is said.” Vādhūla Smriti, verse 197

Hindu scriptures assign five great daily duties for all householders, and the very first one of them is the Brahmayajna, or the daily study and recitation of scriptures, in particular, the Vedas.

Lord Krishna enunciates the study of sacred scriptures as one of the 26 attributes of one who is endowed with divine wealth.

“Absence of fear, Purity of heart and Mind, Steadfastness in the path of Spiritual Wisdom, Charity, Control over one’s senses, Performance of Vedic sacrifices, Study of Holy Scriptures, Austerity and Straightforwardness” Gita 16.1

“Ahimsa, Truth, Absence of Anger, Renunciation, Peacefulness, Absence of Backbiting or Crookedness, Compassion towards all Creatures, Absence of Covetousness, Gentleness, Modesty (Decency), Absence of Fickleness (or immaturity).” Gita 16.2
“Vigor and Energy, Forgiveness, Fortitude, Cleanliness (external and internal), and Absence of too much pride – These belong to the One who is born to achieve Divine Wealth, O Bhārata!” Gita 16.3

Millions of Hindus recite ‘Om’, the Gayatri Mantra, the Purusha Sūkta (Rigveda 10.90), Stotras (hymns in praise of different deities), or sing devotional hymns, or study their holy books on a daily basis as an act of piety and to earn religious merit.

During the convocation ceremony, the Vedic teacher, therefore exhorts his student to continue studying and teaching the scriptures everyday even after they have graduated and have left the school. The Upanishad says that while performing various religious duties and practicing virtues, we must at all times continue svādhyāya and pravachana (teaching to others).

Hindu scriptures themselves equate the study of scriptures to acts of worship, and the fruit of studying and reciting scriptures is said to be considerable. They say: They studied the Riks and thereby offered milk to the Devas. The Devas then manifested. With the study of Yajus, the Rishis made the offerings of clarified butter; with Samans, made an offering of Soma; with the Atharva Angiras, the made the offering of honey. With the study of Brahmanas, Itihāsa, Nārāshaṃsī, Gāthā, Kalpa and Purāṇa, they offered animal fat to the Devas. When the Devas manifested, they destroyed hunger and other evils, and then returned to heaven. By means of this Brahmayajna, the Rishis attained proximity to the Supreme Being. (Taittirīya Āraṇyaka 2.9.2)

A lot of times, Hindus recite and study scriptures without reflecting upon their meaning. This method of reciting scriptural passages from memory mechanically as a ritualistic or a devotional act, without pondering over their meaning, is a good preliminary step towards studying them and acquiring familiarity with their contents. But we must not stop at that.

Importance of Knowing the Meaning of our Scriptures:

Hindu scriptures criticize those who merely chant the scriptures like parrots without trying to understanding their meaning. They say –

He, who having learned the Veda does not know its meaning is like a pillar which merely carries a burden, because only he who knows the meaning attains the auspiciousness and the holy, having got rid of all his sins through wisdom (contained in the meaning of the words). Sage Yāska’s Nirukta 1.18; Rigveda’s Shānkhāyana Āraṇyaka 14.2

An ignorant man has eyes to see but sees nothing, has ears to hear but hears nothing, has a tongue to speak but speaks nothing. The ignorant can never understand the hidden mysteries of knowledge. But it is to the learned alone that knowledge reveals its true nature, just as a woman longing to meet her husband, dresses in her best and puts on her finest jewelry, so as to display her charms to him. Rigveda 10.17.4
Only he who knows (and not merely recites) the Vedic mantras knows the Deities because the Deity does not accept the ceremonial offering that is made without knowledge. Rishi Shaunaka’s Brihaddevatā 7.130,132

Therefore, one must try to understand the meaning of scriptural passages too. But even and chanting and knowing the meaning of the scriptures is not sufficient. Hindu tradition states that the study of our holy books involves five activities:

Fivefold is the practice of Vedas: First is learning it from a teacher, second is contemplation, third is their practice (acting per their teachings and performing the rituals taught by them), fourth is their recitation (Japa) and the fifth is teaching them to one’s own disciple. Daksha Smriti 2.31

In other words, the learning of the letter and the meaning of scriptures must be followed by self-reflection, teaching it to others, and application of the teachings in our daily lives. The daily study of scriptures, and the performance of our daily duties are closely inter-related, and they illuminate and reinforce each other.