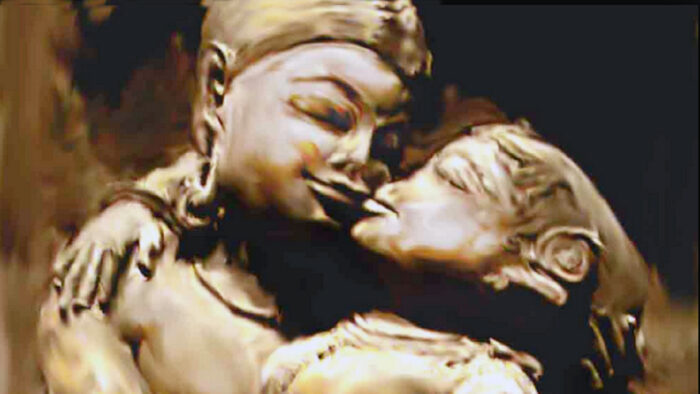 In one of my previous writeups, I had discussed the life of Makkhali Gosāla. He was the most prominent teacher of the Ājīvika order and a contemporary of Buddha and Mahāvīra in the 13th-12th century BCE in the alternative timeline of Indian history. In the Sāmaññaphala Sutta, which is the second book of the Buddhist text Dīgha Nikāya (the long collection), six spiritual teachers contemporary to Buddha are listed: Pūraṇa Kassapa, Makkhali Gosāla, Ajita Keśakambalī, Pakudha kachchāyana, Sañjaya Belatthiputta, and Nīgaṇṭha Nātaputta. As discussed in the previous article, Pūraṇa Kassapa and Makkhali Gosāla belonged to the Ājīvika order. Pakudha Kachchāyana taught a doctrine that cannot be identified with any existing philosophy. Sañjaya Belatthiputta was an agnostic and Nīgaṇṭha Nātaputta is identified with the Jain teacher Mahāvīra by historians. Ajita Keśakambalī was a prominent teacher of materialism. When Ajātaśatru asked Ajita Keśakambalī whether any appreciable benefit was derived from asceticism, he received the following reply:

“There is no (merit in) almsgiving sacrifice or offering, no result or ripening of good or evil deeds. There is no passing from this world to the next. No benefit accrues from the service of mother or father. There is no afterlife, and there are no ascetics or brāhmaṇas, who have reached perfection on the right path, and who, having known and experienced this world and the world beyond, publish (their knowledge). Man is formed of the four elements; when he dies, earth returns to the aggregate of earth, water to water, fire to fire, and air to air, while the senses vanish into space. Four men with bier take up the corpse; they gossip (about the dead man) as far as the burning ground, (where) his bones turn the colour of a dove’s wing, and his sacrifices end in ashes. They are fools who preach almsgiving, and those who maintain the existence (of immaterial categories) speak vain and lying nonsense. When the body dies both fool and wise alike are cut off and perish. They do not survive after death.” [1]

Ajita Keśakambalī is the earliest teacher of materialism known to us. Even though he was a materialist, he was not running after material luxury. As his name suggests, he wore a blanket (kambala) made of hair (keśa). Buddha opined that this blanket must have been very uncomfortable as it became colder in winter and hotter in summer.

Materialism has been known in India by the names of Bārhaspatya, Lokāyata or Chārvāka philosophy. The name Bārhaspatya means a philosophical school founded by Bṛhaspati, the teacher of the Gods. It is pretty strange that materialism was called by this name as the Indian materialists did not believe in gods or any supernatural powers. The basis of this association is the following passage in Maitrāyaṇa Brāhmaṇa Upanishad [2]:

“Bṛhaspati having become Śukra, brought forth that false knowledge for the safety of Indra and for the destruction of the Asuras. By it they show that good is evil, and that evil is good. They say that we ought to ponder on the (new) law, which upsets the Veda and the other sacred books. Therefore, let no one ponder on that false knowledge: it is wrong, it is, as it were, barren.”

According to this passage, Bṛhaspati deliberately taught a false doctrine to the forces of evil leading to their destruction. It stands to reason then that the name Bārhaspatya was given to the materialistic philosophy by its competitors who held the opinion that the materialistic philosophy was a false doctrine. Over time the name stuck and Indian materialists were known by a name that they would never have approved.

The name Lokāyata for materialistic philosophy seems more appropriate. Loka means world and thus, Lokāyata means a philosophy that is focussed on worldly affairs. The most popular name for the materialistic philosophy, though, was Chārvāka, which seems to be based on the name of a person named Chārvāka. We don’t have any information about the life of Chārvāka or when he lived. Mahābhārata talks about a demon named Chārvāka [3], but there is no indication that this Chārvāka had anything to do with the Chārvāka philosophy. Chārvāka demon is described as a friend of Duryodhana.  Chārvāka started saying bad words to Yudhiṣṭhira after his victory over Kauravas and perished during his confrontation with the priests.

The original text of the Chārvāka philosophy was called Chārvākasūtra. Unfortunately, this text is lost to us. There were many commentaries written on the Chārvākasūtra. Four known commentators of the Chārvākasūtra were Kambalāśvatara, Purandara, Aviddhakarṇa, and Udbhaṭa. Unfortunately, most of the commentaries have been lost and only some fragments are available. The most important source of information for Chārvāka philosophy is the text Sarvadarśanasaṃgraha written by illustrious scholars Mādhava and Sāyaṇa in fourteenth century. First chapter of Sarvadarśanasaṃgraha summarizes the Chārvāka philosophy as understood by Mādhava and Sāyaṇa, who were not the followers of this philosophy themselves. Mādhava, also called Mādhavārya, Mādhavāchārya or Mādhavāmātya, was a minister in the court of Sri Bukka Rāja of Vijayanagara Empire. Mādhava composed many texts, some of them with the assistance of his brother Sāyaṇa, such as the commentaries on the Ṛgveda, Aitareya Brāhmaṇa and Taittirīya Samhitā. Mādhava calls himself Abhinava Kālidāsa or the new Kālidāsa in his work Śankara Vijaya on the glory of the great philosopher Ādi Śankarāchārya. Mādhava’s other books written without the assistance of Sāyaṇa include Kāla Mādhava (a treatise on the Hindu calendar), Āchāra Mādhava (a treatise on the practice of the Brāhmaṇas) and Vyavahāra Mādhava (a treatise on the Law). Sarvadarśanasaṃgraha, which means compilation of all philosophies, attributes the authorship of the text to Sāyaṇa-Mādhava, which means that the text was written by both Sāyaṇa and Mādhava.

Some other texts also contain information about Chārvāka philosophy. Dakṣiṇāranjan Śāstrī compiled the Chārvāka fragments in the book Chārvāka Ṣaṣṭi, which as the title suggests contains sixty verses [4]. These sixty verses are taken from the following texts: verses 1–47 from Naiṣadhīya-charitam by Śrıharṣa, verses 48–55 and 57–59 from Sarvadarśanasaṃgraha by Sāyaṇa-Mādhava, verse 56 from Vidvanmodataraṅgiṇī by Chirañjīva Bhaṭṭachārya, and verse 60 from Śaḍdarśanasamuchchaya by Haribhadra. Since the information about Chārvāka philosophy comes from sources which were generally not sympathetic to the Chārvākas, researchers are not unanimous regarding what constituted the original Chārvāka philosophy and what has been added to malign the Chārvākas. A critical study of this matter has resulted in two other compilations of Chārvāka philosophy by researchers Namai [5] and Bhattacharya [6]. The main beliefs of Chārvākas are listed below:

2. Indian texts considered everything in the universe to be made of five elements: earth (pṛthvī), water (āpaḥ), air (vāyu), fire (agni), and space (ākāśa). Chārvākas did not consider space to be an element. Bhāskarāchārya has summarized their position as “pṛthivyāpastejovāyuriti tattvāni” meaning earth, water, fire and air are the elements [8]. Chārvākas considered the consciousness to arise from the combination of these four elements.

Meaning: “There are four elements in this school of thought namely earth, water, fire and air. The consciousness arises from these four elements.”

Madhusūdana Sarasvatī has given the Chárváka viewpoint as “śarīrendriyasaṅghāta eva chetanaḥ kṣetrajñaḥ” meaning consciousness is the result of the union of the body and the senses [10]. Thus, the Chārvākas did not believe in the concept of Atma that is separate from the body.

3. Traditional Hindus believed in the pursuit of four puruṣārthas or goals of life, kāma (pleasure), artha (wealth), dharma (righteousness) and mokṣa (liberation). The Chārvākas considered the pursuit of pleasure as the only goal of life. Their position is summarized by Madhusūdana Sarasvatī as “kāma evaikaḥ puruṣārthaḥ” meaning pleasure is the only goal of life [11]. The guiding principle of life for the Chārvākas is described by the following famous verse [12]:

Meaning: “As long as you live, live happily. Drink ghee (clarified butter) by taking loan. Once the body is turned into ashes, where is the question of coming again?”

4. The Chārvākas didn’t believe in the theory of Karma. They didn’t believe that people have to bear the fruits of their puṇya (meritorious acts) and pāpa (sins). Jain mendicant Haribhadrasūri has presented the Lokāyata viewpoint as “dharmādharmau na vidyate na phalam puṇyapāpayoḥ” meaning there is no existence of dharma (moral behaviour), adharma (immoral behaviour) and the fruits of puṇya (meritorious acts) and pāpa (sins) [13]. The Chārvākas believed in enjoying life in the present than to make sacrifices now to have a better life in future. Vātsyāyana has illustrated the Chārvāka viewpoint as follows [14]:

Meaning: “Only a fool will give what is in one’s hand into the hands of other. A pigeon in possession today is better that a peacock tomorrow.”

5. The Chārvākas didn’t believe in afterlife and concepts of heaven and hell. Their belief was “dehochchhedo mokṣaḥ” meaning the end of physical body was liberation [15]. They held that “dukhameva narakaḥ” meaning (a life filled with) sorrow was hell [16]. They proclaimed that “na svargo nāpavargo vā naivātmā pāralaukikaḥ” meaning there is no heaven, no liberation, no soul and no afterlife [17].

Thus, we find that the Chārvākas were materialists in their beliefs. They didn’t believe in anything that could not be verified by direct perception by the senses. They believed that rituals were invented by Brāhmanas as a means of livelihood.

The Chārvākas remained a vibrant group in India for most of its history. Abul Fazl included Chārvāka as one of the nine schools of Hinduism. He has summarized his understanding of Chārvāka philosophy in the third volume of the Akbarnāma, known as the Āīn-i Akbarī (Constitution of Akbar) in the following words [18]:

“Chárváka, after whom this school is named, was an unenlightened Brahman. Its followers are called by the Bráhmans, Nástikas or Nihilists. They recognize no existence apart from the four elements, nor any source of perception save through the five organs of sense. They do not believe in a God nor in immaterial substances, and affirm faculty of thought to result from the equilibrium of the aggregate elements. Paradise, they regard as a state in which man lives as he chooses, free from the control of another, and hell the state in which he lives subject to another’s rule. The whole end of man, they say, is comprised in four things: the amassing of wealth, women, fame and good deeds. They admit only of such sciences as tend to the promotion of external order, that is, a knowledge of just administration and benevolent government. They are somewhat analogous to the sophists in their views and have written many works in reproach of others, which rather serve as lasting memorials of their own ignorance.”

It is interesting to note that despite their unorthodox views, there is no evidence of the persecution of the Chārvākas in ancient India. India was a land of intellectual freedom, where people could live fulfilling lives without fear of persecution due to their beliefs. The most important part of the Chārvāka belief system was to have a good life full of enjoyment as the Chārvākas didn’t believe in afterlife. To make sacrifices in this life for a better afterlife is a revolutionary idea that has been used to regulate human behaviour all over the world, but in its latest transformation this idea now threatens the very existence of humanity.

Dr. Raja Ram Mohan Roy earned his B. Tech in Metallurgical Engineering from the Indian Institute of Technology, Kanpur, and Ph.D. in Materials Science andRead more