From Maatar To Mother: Seeing Sanskrit In English 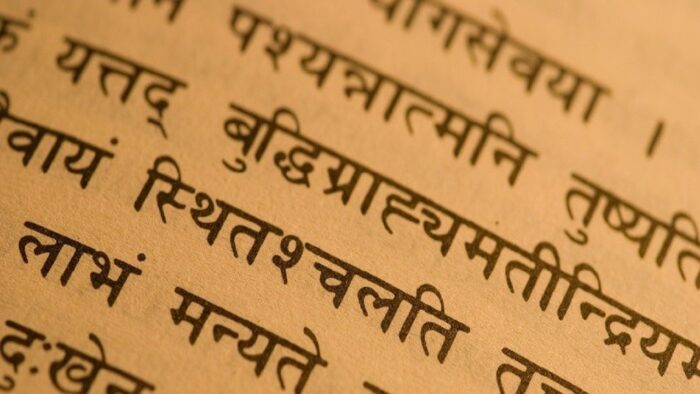 “How are your Sanskrit studies going?” asked Indira, a dear friend.

So, I replied, “Well, the sentence you spoke connects with Sanskrit in two ways.  The word ‘Sanskrit’ itself is an Anglicized form of the Sanskrit word ‘Samskrtam’, which means “that which is done well, complete”.  Then, the verb ‘go’ likely derives from Sanskrit root ‘ga’ “to go”.  For example, that which ‘goes (moves) in the sky’ is called Khaga (Kha stands for space or sky).  Hence, a bird or an airplane is called Khaga.  A reptile or snake is called Uraga because it ‘goes/moves on its chest (“ura”)’. And durga means “one whose presence makes sadness go – dukham gacchati!” That is how my Sanskrit is going!”

There are many words in English such as Guru, Mantra, Pundit, Swami and Avatar that are direct copies of the original Sanskrit terms.  For example, since there is no concept equivalent to Karma in the western worldview, the word “Karma” has been copied into the English lexicon as is.  There are other words in English, which are believed to belong to English, but on deeper analysis seems to originate from other languages such as Latin, or, in the case of my interest, Sanskrit.

“I have heard that Sanskrit is the mother of all languages”

“You may be correct.  But I do not know enough to prove that.  What attracts me is the word ‘mother’, and words representing the closest kith and kin. Take a look: 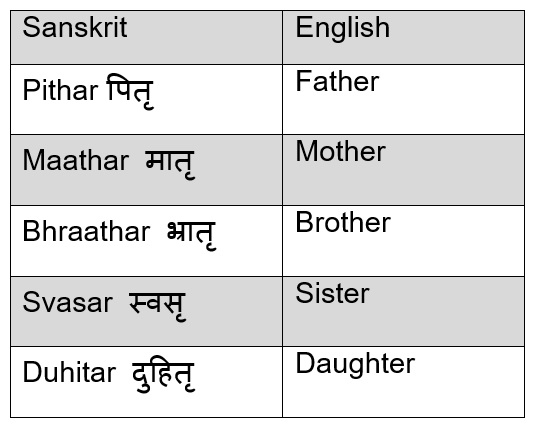 “Stop!  These words look almost identical in both languages!”

“Isn’t it?  Mere coincidence?  I wish somebody researches into this. By the way, ‘Stop’ is not an ordinary word either.  It likely derives from the root ‘sthaa’, which is firmly entrenched in Sanskrit and English. ‘sthaa’ refers to “cessation of motion”.  Take a look at these words in Sanskrit:

“Wow! You seem to be building a new vocabulary.”

I am just trying to connect.  Talking about ‘vocabulary’, do you find anything common in these words – vocal, voice, vocative, vociferous, vocabulary, invoke and revoke”?

“Something related to speech!”

Yes, and the Sanskrit root we are looking for is “vaach” in the sense of ‘speaking’.  For example: 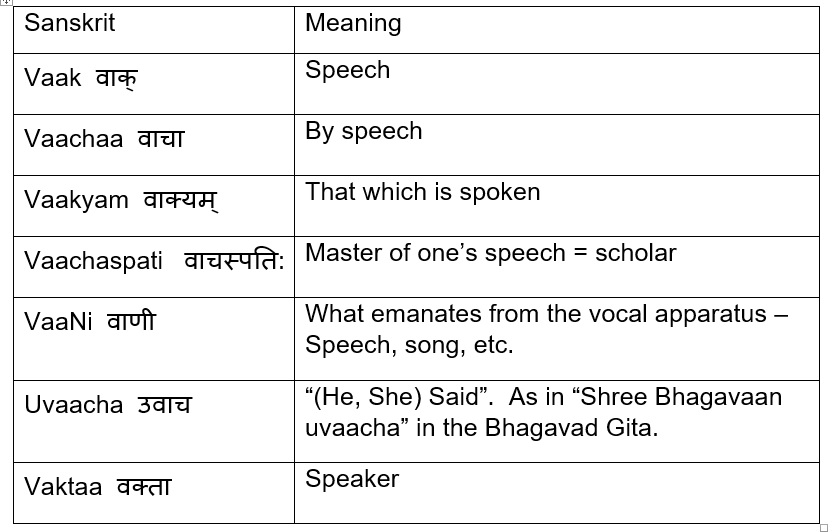 “This is looking marvellous”

I told you.  Wait, you just introduced another Sanskrit word. Let us take a look at ‘look’, it looks curiously close to ‘Lok’.

We can now see why ‘world’ is called “Loka” in Sanskrit – “that which is perceived (by a conscious being)”.  Thus “Bhu Loka” (The earth), “Indra Loka” (the world belonging to Lord Indra), etc.  Also, notice that “Locate” has the meaning “to see or spot”.

“You are driving me crazy.”

On the contrary, “you” has always been driving me crazy!  In Sanskrit “you” is ‘tvam’.  There seems to be no connection between “you” and “tvam”!  Let me explain this dilemma.

If we look at Personal Pronouns in general, this is what we find: 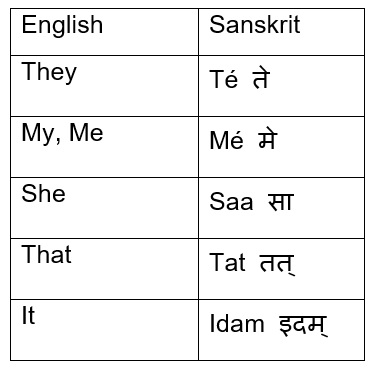 “The words seem to be almost identical!”

That is correct.  That is why, I have been wondering about the apparent disconnect between the words “you” and “tvam”.  To unravel this, we need to investigate.  In Sanskrit, a noun has a native form, such as “krishna”.  Then, it undergoes transformations before it can be used as a word in a sentence.  The various relationships of a noun, such as “Krishna (the subject)”, “by Krishna” (Krishna, the agent), “to Krishna” (recipient), “from Krishna” (giver), “Krishna’s” (possession), etc. appear in Sanskrit as single words, as in “krishnah”, “krishnena”, “kriShNaaya”, “krishnaat”, and “krishnasya” respectively.

Let us tabulate all these forms: 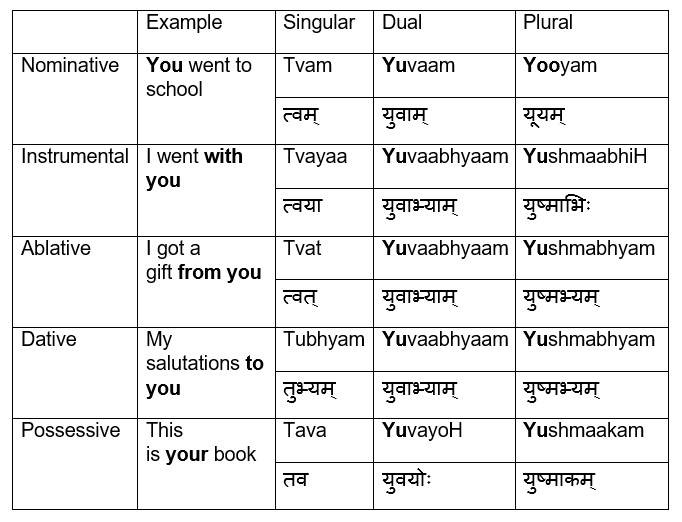 Pay attention to the numerous “Yu”s.  It must have been easier to adapt this simpler abbreviation “Yu” for second person singular “you” into English!

“Oh my God!  It is cruel of the British to have made us believe that English is superior to the divine Sanskrit…”

Hmm.  The British.  That deserves a whole new chapter.  You mentioned ‘cruel’.  Could “cruel” derive from the Sanskrit word kroora? And Cruelty from kroorataa?  Wouldn’t it be nice to know how kroora morphed into cruel? Or, how the word “divine” which you invoked, may have derived from “daivam”?  Perhaps a research topic for somebody?

“Are you suggesting that English is a cut-and-paste of Sanskrit?”

Not at all.  You are the one insisting on bringing Sanskrit into our discussion, not me.  Paste is piShTa, and cut is kRitta in Sanskrit.

“You are making me feel that English is same as Sanskrit.”

English is definitely not the same as Sanskrit, but “same” seems to be the same as “sama” just as “name” could be derived from “naama”!

Sanskrit is an ocean where one can dip oneself for a lifetime.  “Lick” appears to be derived from “lih”.  For example, the “Chyaavanpraash” that many Indians are familiar with or the chocolate candy that you lovingly stroke in your mouth is called “lehyam”; literally, “that which is to be licked”.

“Are you suggesting a new method to navigate Sanskrit?”

I think there is an opportunity. The purpose of this article is to stoke a deep interest in Sanskrit.  Too often, we are told that Sanskrit is dead, or Sanskrit is an “Indo-European Language”.  Who decides?  Can Sanskrit not stand on itself?  Isn’t it an Indian Language first and foremost?  After William Jones exclaimed the sophistication of Sanskrit (“more perfect than the Greek and more copious than the Latin”) and its relationship to German, Greek, Latin and other languages, it was quickly proposed that they were part of an “Indo-European Language family”, whose root would be a “Proto-Indo-European” (PIE) language.  To date, a PIE has not yet been found.  This leads me to believe Sanskrit to be a unique and an independent language originating solely in India.

Back to your question of navigating Sanskrit, “navigate” is a combination of two Sanskrit words:

A Google search reveals numerous references with countless examples of English words with Sanskrit origins: ignite <- agni; Know <- jnaa; bandana, band <- bandana, bandha; orange <- naaranga; punch (drink) <- pancha (five – ingredients).  I want to caution you that I have not researched the origins discussed in this article.  I am merely surmising based on apparent similarities.  I would not be surprised if many of my observations are proved to be correct.  I welcome insights from readers.  The purpose of this imaginary dialogue is to spur interest in Sanskrit, or “Devabhaasha”, the “Language of the Gods”.