After Millennia a Tradition Is Reborn 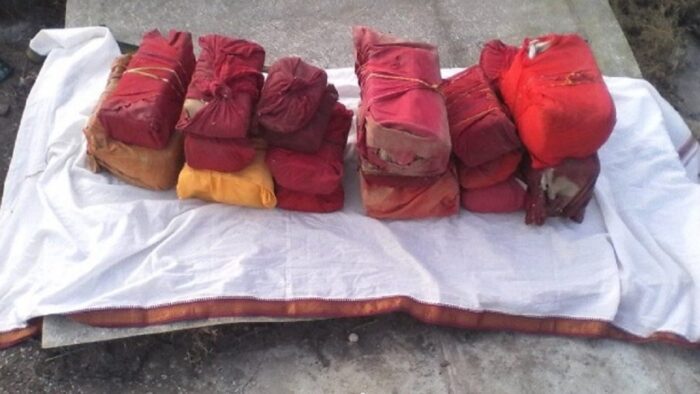 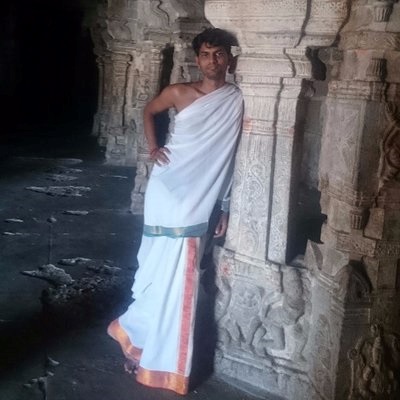 Mohit Bharadwaj is a man on a mission.

He wants to have the 21 nitya sacrifices performed again in Madhyadesa, the original homeland of the Vedas and the very air ring with the songs of the Sama Veda and the most ancient Rks.

He has seen a future of an air with rising smoke from the agnihotra, the earth trodden by horses led to the soma sacrifice and of somayajis taking the ritual avabhrita bath at the conclusion of the somayaga.

It is the future he and his team of scholars have pledged their lives to.

Out of the mists of Time

Imagine a whole version of the Iliad, sung by bards as in Homeric times. Imagine a full manual dedicated to the ritual performance of the Iliadic drama, lost for centuries. Now imagine finding 2 old men in a remote Aegean island singing the stories, unchanged across the centuries, in a village of people dedicated to preserving it in hand-written manuscripts, carefully drafted and secreted away.

Such is Banswada, a small town in Rajasthan. It was here that a whole recension of the Rig Veda has been discovered, thought to have been lost for centuries. Here, on the border of Gujarat, are two septuagenarians who are the last two living reciters of the Shaankhaayana Shakha of the Rg Veda.

How Vedic learning is organized.

The primary corpus of the Vedic trove are the 4 – Rig, Yajur, Sama and Atharvan. Each of these Vedas has multiple recensions, called shaakhas. Patanjali in his Mahabhaashya mentions 1131 recensions in all – 21 Rig Veda Shaakha, 86 of the Krishna Yajurveda, 15 of the Shukla Yajur Veda, 9 of the Atharva Veda and 1000 of the Sama Veda.

Each shaakha, to be considered complete – is composed of 4 parts

However, this is not a water-tight definition. The Brihadaranyaka Upanishad, for example, contains descriptions of certain rituals.

Different families are required to specialize in different shaakhas, so that the task of memorizing and preserving the text is shared among many people.

Now, to the subject of ritual. Ritual manuals have been composed for grihya and shrauta rites. Grihya rites are the household rituals, starting from the garbhaadhaana ritual before a child is conceived, to the seemantonnayana ritual for pregnant women, to the choula ceremony at the time of the first tonsure of a child, the upanayana or beginning of studies and so on.

More complex are the shrauta sutras – manuals composed for the performance of major rites. These rites mainly take the form of fire-sacrifices or homa/havanas. These rituals (or karma, literally meaning ‘something done’ or ‘activity’) are organized into

Of the nitya karma performed in the shrauta fashion, they are further divided into 21 rites

Ritual manuals are allocated to different shaakhas and regions. The Bodhayana and Apastamba Shrauta Sutras, for example, are designed for Krishna Yajur Veda and the Baashkala or Aashvalaayana Shakhas of the Rig Veda.

Sutras, by their very design, are concise and cryptic in their brevity. They were designed for easy memorization and transmission.

They are further elaborated upon by commentators, and the commentaries are called Bhashyas.

Of the extant shaakhas, the Aashvalaayana Shaakha of the Rig Veda is the best preserved and has most practitioners in the South of the Vindhya mountains.

In the North, the given book of Shrauta is the Kaatyayana Shrauta Sutra, whose related Yajur Veda rescenscion is the Vajaseyani Samhita of the Shukla Yajur Veda. The associated Sama Veda rescenscion is the Kauthuma Shaakha. The Kauthuma Shaakha, again, has 2 recitation styles, called paddhatis (literally ‘procedure’) – the Madra paddhati, and the Gurjara paddhati. The Madra paddhati (which originated in the Madra region, said to be the Ravi-Chenab doab in Pakistani Punjab), is well preserved among the Sama Veda reciters in the South. The Gurjara paddhati, however, has no more than 10 experts left, almost all of them resident in Kashi, prominent among them being Shri Sharat Joshi.

The Rig Veda shaakha associated with the Kaatyayana Shrauta Sutra is the Shaankhaayana. This was thought to have been lost, save for a rare text published several decades ago.

This brings us back to our tale.

A Fellowship Is Born

We begin our tale in 2014, when Mohit, a young engineer working for a multinational IT Corporation in Noida, was scouting the possibility of improving his repertoire of Yajur Veda, when he met Gyanendra Sapkota, a scholar from Nepal, who shared his passion for reviving the Shukla Yajur Veda Shrauta ritual. It was from scholars in Gujarat that the duo learnt of the last two people proficient in chanting the Samhita of the Shaankhaayana Shaakha, thought extinct. 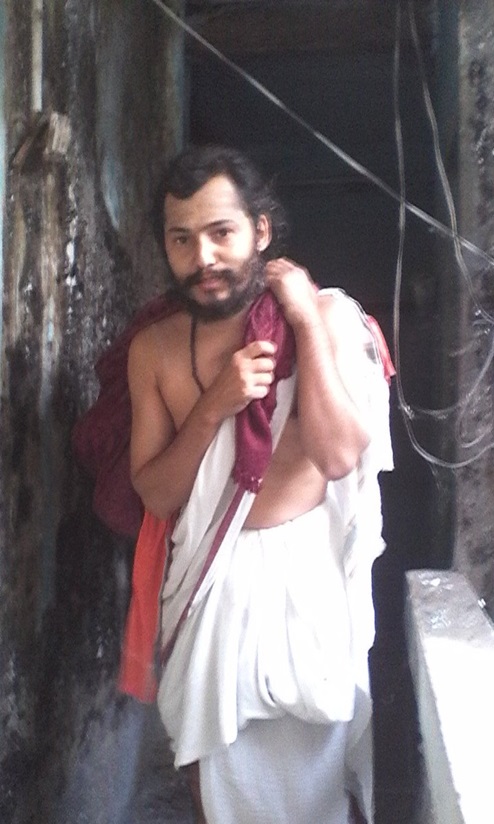 After visiting Banswada in November 2014, they were joined in their quest by Abhijeet Dinkar Savale of Tryambakeshwar, a young man in his 20s, who had completed studies in the Shukla Yajur Veda and who had learnt Vyakarana (grammar) from Shri Gyanendra Sapkota, while Gyanendra was teaching in Varanasi.

Abhijeet’s hereditary shaakha was the Rig Veda, but he was forced to undergo basic training in the Madhyandina Shaakha of the Shukla Yajur Veda instead. Despite his family’s straitened circumstances, Abhijeet volunteered to spend years in learning the Rig Veda, in order to carry forward the legacy bequeathed to him.

It is but a manifestation of the eternal nature of Sanatana Dharma that three people, a Maharashtrian Madhva, an engineer from Mathura and a Sanskrit Scholar from Nepal, were brought together on this quest to revive a millennia-old tradition, nearly extinct for several centuries.

It was during their second visit that the two exponents, Shri Indrashankar Jha and Shri Harshad Nagar, let it be known that they had handwritten manuscripts in their possession.

After Abhijeet had committed to learning the Shaakha, the three men started going through the manuscripts that were there.

Nothing had quite prepared them for what lay ahead.

Inside a secret treasure cave

What would greet them but a horde of manuscripts from centuries past. Over time, they found that the entire lost Shaankhayana Shaakha was there – Samhita, Brahmana, Aranyaka and Upanishad. To their wonderment, the manuscripts were from a wide range of periods. The earliest was a manuscript of the Shaankhaayana Brahmana that declared itself to have been scribed in Vikrama Samvat 1525, or 1468 CE. To put that in perspective, the earliest Rig Veda manuscript found thus far is from 1464 CE, now preserved at the Bhandarkar Oriental Research Institute, Pune.

From this period until the early part of the 20th Century, there were manuscripts in all centuries, with hardly any gaps beyond a couple of decades.

In this small town, a dedicated group of scholars had preserved and transcribed their knowledge continuously, from before the advent of the Mughals, through the worst depredations of British rule and beyond the rule of Queen Victoria.

And the range of these manuscripts is equally humbling. Besides the entire Shaankhayana Shakha, there were manuscripts of the Shaankhaayana Sutras for performance of Grihya and Shrauta rites, This Sutra was accompanied by the Bhashya, a commentary by an unknown scholar Narayana, whose commentary on other Sutras is in Jammu.

Another scholar, possibly local, has written the entire paddhati, or ritual performance manual. 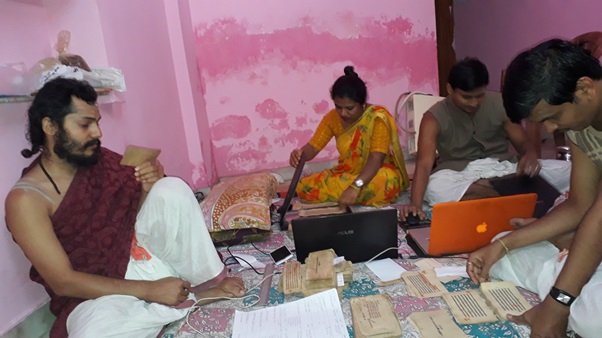 Picture 3 The task of identifying digitization. At extreme right is Abhijeet, torch bearer of Shaankhaayana

To give the reader an understanding of the significance of this, the Grihya Sutra would merely state that an aajyabhaaga oblation would have to be given to the accompaniment of a specific Rk or hymn from the Rg Veda.

The Bhashya would further elaborate how the oblation is to be given, the specific implement to use and more details on the Rk to pronounce.

The paddhati would elaborate on how the implement is to be cleansed, with what material, if it is to be whisked with the darbha grass, how many times. Essentially, the paddhati is purely for the practitioner, intended as a guide to choreograph every thought and action of each individual involved in the ritual.

Beyond this, there are manuscripts for various Vedangas or limbs of the Veda, for Vyakarana grammar, as well as paddhati manuals for the pronouncement of these Rks in the Ghana format.

It is conceivable that with these set of manuscripts, an entire Shaakha, all rituals and rites associated with it can be revived in it’s entirety and in pristine glory, as it was 3500 years ago, at the earliest.

With support from sponsors, scanners have been purchased and the work of digitization and preservation of the manuscripts is continuing in full earnest.

Abhijeet Savale has taken leave of his profession as a purohit (which would give him a decent living) and spent the last 3 years in mastery of the Shaakha from the two Acharyas. He has done this for a meager stipend merely for sustenance and travel expenses. These expenses have been met by private individuals. A full pAryAyaNam, or recital, of the entire shaakha is scheduled for June 2018.

Abhijeet and Mohit are planning to start a paathashaala near Delhi, where Abhijeet shall teach the Rig Veda, Mohit the Shukla Yajur Veda, and together, the two shall conduct the Shrauta rites of yore.

This tale is destined for a happy ending, provided the Hindu Samaj wills it. It is entirely up to us to support these intrepid scholars in their journey.

You can reach the Vaidika Bharata team at: