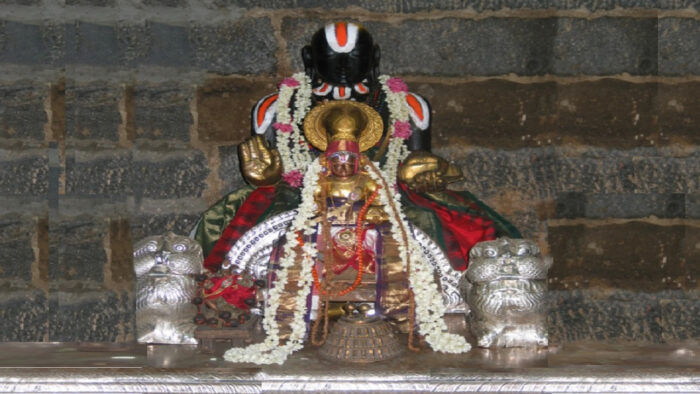 On the occasion of the 750th birth anniversary of the great acharya Vedanta Desika, we had the opportunity to glimpse key incidents in his illustrious life spanning a hundred and one years. In this article, we try to skim the surface of his vast oeuvre of a hundred plus works across genres and themes including Kavya, Natya, Tarka, Vedanta, Nyaya, Mimamsa, Agama and even Shilpashastra. A rare master kavi and tarkika, he wrote both commentaries and original works across languages – in Sanskrit, Tamil, Manipravala and Prakrit. Obviously, an in-depth study of Desika’s works is beyond the author’s ability. It is the task of a lifetime under the guidance of a guru. Here the modest attempt is to get a glimpse of the dazzling brilliance and depth of scholarship that Sri Venkatanatha embodied and outline some of his key contributions to Visishtadwaita Vedanta, poetry, the vaada tradition and to panditya in general.

At the outset, it is important to recognise the foundational impact of his acharya and uncle Sri Atreya Ramanuja, under whom he studied for nearly thirteen years. Sri Atreya Ramanuja was an acharya in an unbroken direct lineage from Sri Ramanuja, whom tradition considers to be a master of the 32 Brahmavidyas and an expert in Nyaya and Mimamsa. Some of the key insights that inform Vedanta Desika are considered to be present in his works, unsurprising, considering Desika’s profound guru bhakti.

There has been a long tradition of differing views among various Vaidika Sampradayas( traditions that accept the Veda) regarding the position of the Agamas/ Tantras. The Pancharatra Agamas, one of the two groups of Vaishnava agamas, are considered among the most ancient, with mentions found in the Taittriya Samhita, Shatapatha Brahmana, Narayaniya of the Mahabharata etc. However, some Vedanta schools considered them to have non-vedic elements. In Vishistadwaita, the Pancharatra Agamas are key foundational texts, governing practical dimensions of everyday life including establishment of temples, prasitishta of murtis, pooja vidhi and even many everyday homas. They are considered direct revelations of Sriman Narayana himself in Hamsa Swaroopa to rishis on how to conduct his worship. Therefore from the time of Yamunacharya, Sri Ramanuja’s guru, who wrote Agamapramanya, there has been a Visishtadwaitic defence of the validity and vedic nature of the Pancharatra Agamas. Ramanuja in his Sri Bhasya defends the validity of the Pancharatra. However, it was Desika who completed and the comprehensively established that the Pancharata was vedic and therefore to be followed in his work titled Pancharatra Raksha. He makes a brilliant defence of the agama by establishing how the Pancharatra is based on the Veda and is therefore equivalent to a smriti. Further, since the Pancharatra has been directly revealed by Sriman Narayana who is Brahman himself (he establishes the equivalence), it must be considered valid. Desika not only undertook the defence of Pancharatra Agama that he followed, but also wrote a commentary named Sajjana Vaibhava on the other set of vaishnava agamas, the Vaikanasha agama, considered to emanate from Brahma. Through his works Desika firmly established the validity of the Vaishnava Agamas securing them from future challenges.

Taking the Dravida Veda beyond the Vindhyas

The Srivaishnava sampradaya to which Desika belonged, bases its Siddantha (philosophy) on both the upanishads and the 4000 Divya Prabanda, the collected hymns of the 12 Azhwars. The school considers the mystic vision of the Azhwars to be the key to interpret the veiled language of the Veda. Thus it is called the Ubhaya Vedanta, or the dual Vedanta of Sanskrita Veda and Dravida Veda. Naturally this view came under attack from other Vedanta schools. To defend the validity of the Divya Prabandham, Desika composed a commentary on them in Sanskrit, the Nigama Parimala, which is unfortunately lost today. Glimpses of the ideas are found in other works. Further, he brought out the key philosophical and mystical insights of the vision of the Azhwars in the Dramidopanishad Tatparya Saravali and Dramidopanishad Saaram, both written in Sanskrit. For the first time, the vision of the Azhwars became available beyond the Vindhyas, in cosmopolitan Sanskrit. Thus Desika made a stellar contribution to defending and propagating the vision of the Azhwars that form the foundation of the Ubhayavedanta Srivaishnava Sampradaya.

The magnum opus of Ramanuja was his Sri Bhashya, the commentary on the Brahmasutras of Badarayana Vyasa based on the Vritti(commentary) of Bodhayana. Ramanuja outlines the vision of Visishtadwaita, qualified non-dualism based on the three tattvas the individual jiva, jagat and ishwara. He also establishes that the upanishadic Brahman is identical with Sriman Narayana. After Ramanuja’s time, some of the propositions had been challenged by rival schools. Desika wrote the Tattvatika, an exposition on the Sri Bhashya to answer the criticisms and reestablish the validity of Ramanuja’s Darshana. Further, he taught extensive courses on the entire Sri Bhashya for an astounding thirty times in his lifetime. Similarly, he wrote Tatparyachandrika an exposition on Ramanuja’s commentary on the Bhagavadgita. His original commentary on the Ishavasya Upanishad interprets it as espousing the path of sharanagati based on Visishtadwaita. Thus, Desika contributed significantly to the Srivaishnava vision of the Prasthanatrayi, the three foundational texts of Vedanta.

His magnum opus however is considered to be the Tattvamuktakalapa along with its exposition the Sarvatrasiddhi. As the learned S. M Srinivasa Chari writes in his Fundamentals of Visishtadvaita Vedanta

“The main objective of Taltva-mukta-kolapa, as stated in one of the opening verses, is to establish the doctrines of Visistadvaita Vedanta on a sound basis through a critical evaluation of the corresponding doctrines advocated by rival schools of thought.
It covers all the important philosophical, epistemological, cosmological and religious doctrines of the Visistadvaita system. As Vedanta Desika claims, there is no topic in philosophy which is not discussed in this work.”

This serious philosophical work, is written entirely in shragdhara metre! Desika does not merely make rigorous arguments, but makes them in such elegant poetry that the reader would find it hard not to be swayed by it. This ornament made of tattvas, was offered by Desika to Lord Sri Ranganatha of Srirangam. Tattvamuktakalapa is considered as a shield to defend Vishishtadwaita, with Desika’s other work Shatadushani being the dialectic sword.

Ekashastra: Harmony of Mimamsa and Vedanta

One of Desika’s seminal contributions is his work in reconciling Vedanta and Mimamsa. In Ramanuja’s vision, there is no irreconcilable difference between Mimamsa, which is based on the Brahmana portions of the Veda and Vedanta which is based on Upanishad portions. Ramanuja considers the Purva Mimamsa as a part of the same teaching of Vedanta. Continuing this vision, Desika considers the Veda to not only have karma kanda and jnana kanda but also an upasana kanda that bridges both. Therefore the Purva Mimamsa and Uttara Mimamsa (Vedanta) are ekashastra – one undivided teaching. Jaimini, the author of the Mimamsasutras is identified as the discipline of Badarayana Vyasa, the author of the Brahma Sutras. Desika criticises Mimamsakas who reject Vedanta as Kabhanda Mimamsakas (headless mimamsakas) and Vedantins who reject Mimamsa as Rahu Mimamsakas (i.e head without body). In his magnificent Seshavara Mimamsa, Desika comments on the Jaimini’s Mimamsasutras based on the vision of the Vedanta. Fascinatingly, he brings the notion of Ishwara into Mimamsa. The vedantic vision sees the Veda as siddha -that which gives knowledge about what exists e.g satyam jnanam anantam brahma. The Mimamsa vision on the other hand, sees the Veda as sadhya, that which prescribes karma. Desika brilliantly reconciles these apparently contradicting visions by arguing that what is to be done, Sadhya, is based on cognition, Siddha. Having established Mimamsa’s compatibility with Vishishtadwaita, Desika brilliantly deploys the Mimamsa approach to dealing with shakas (branches) of the Veda to reconcile diverging views between Pancharatra texts.

This masterful reconciliation of Vedanta and mimamsa would by itself be considered a lifetime’s work for a brilliant acharya. But this is only one of Desika’s many stellar contributions. He effects a similar reconciliation between Nyaya and Vedanta in his Nyaya Parishuddi and Nyaya Siddanjana. In Nyaya Parishuddi he refines the Nyaya approach to pramanas, valid means of knowledge, to make it consistent with Visishtadwaita Vedanta. In Nyaya Siddanjana he focuses on the prayema or the object of true knowledge i.e. Brahman. Here he expounds on the complete vision of Visishtadwaita.

Apart from being an extraordinary scholar, Desika was a dialectician par excellence, earning the title of Kavitarkika Simham, a lion among both aestheticians and dialecticians. Therefore his literary production includes rigorously argued Vaada Granthas. Prominent among them is Paramatha Bhangam written in manipravala with 24 chapters. In this work, he critically surveys 15 existing schools of the time including four schools of Buddhism, Jain schools, Bhaskara Mimamsa, Vaiseshika, Yoga, Nyaya, Sankhya, Paashupatha, etc. and systematically deconstructs them from the viewpoint of Visishtadwaita. Another jewel among his dialectical works is Shatadushani, which levels 100 shortcomings against Advaita in a 100 chapters, all in elegant poetic metre. Only 66 chapters survive today.

The fiery Tarkika was also a Kavi par excellence who could write heart melting kaavyas of considerable poetic prowess. These include Hamsasandesha in which Rama sends a swan as a messenger to Sita and Yadavadhbudaya that extols the life of Krishna from birth to his final departure in 24 chapters. The latter work won the critical appreciation of the famous adavitin Sri Appaya Dikshita who wrote a beautiful commentary on the same. Similar to the Prabodachandrodaya, an allegorical drama that expounds advaita through the medium of natya, Vedanta Desika composed Sankalpasuryodaya, a drama in which the jiva surrenders to the divine through the help of his acharya. Desika’s poetic oeuvre also has over 30 storas, including the legendary Padukasahasram, 1008 verses on the Paduka of Sriman Narayana composed in the span of one night. The complete works of Desika are written on the outer walls of the Desika shrine at Sri Tuppul. The poetry alone totals over 6000 stanzas. Desika’s other works include Shilparthasara on art and architecture, two works on organic and metal based medicine and Aahara Niyama, on a sattvic diet. It is no wonder that he was given the title of Sarvatantra Swatantra, master of all branches of knowledge.

Across Desika’s vast range of styles and themes, there is clear underlying unity and consistency of vision. What is conveyed in moving mystical poetry is expressed in systematic, rigorous philosophical language.

Of this vast extensive oeuvre, some works have been lost with the ravages of time and few are not currently in print. Only some have received English translations. Scholarly study on Desika beyond the traditional scholarly circles, exists only in a few places.

How was such immense panditya and kavitva possible in one lifetime? Desika would clearly say, as he does in his works, that he is just speaking what his purvacharyas taught, that every word is inspired by Hayagriva who sits on the tip of his tongue. Maybe it is time to move beyond interpreting such remarks as mere humility or symbolism and take the words of Acharyas more seriously.

O lion among Kavi’s and Tarkikas, endowed with all kalyana gunas

As someone born in a Srivaishnava family, this is my humble attempt to learn and pay homage. Elders should kindly correct and forgive mistakes inadvertently made.

Hopkins, Steven Paul. 2002. Singing the Body of God: The Hymns of Vedantadesika in Their South Indian Tradition. Oxford University Press. 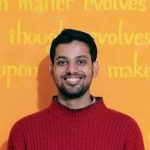