Myriad Yatras – Reflections On The Conference On Yatras 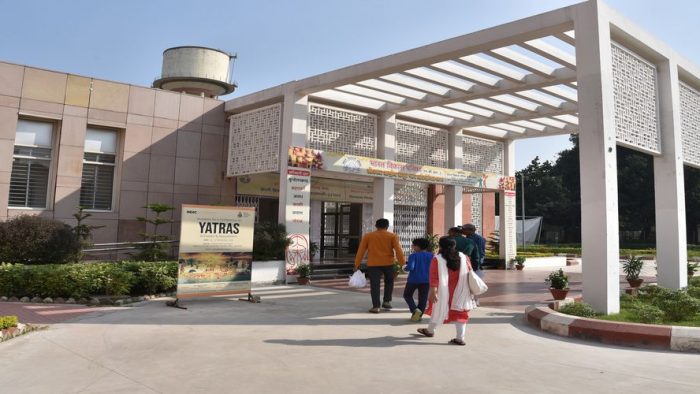 Kashi, the eternal city that attracted scholars and seekers from time immemorial, and set in that city within the walls where “मधुर मनोहर अतीव सुन्दर, यह सर्वविद्या की राजधानी” refrain echoed, there a three-day Yatra conference was conducted. As a Banarasi and a Banaras Hindu University student said, the Indic Academy and Bharat Adhyayan Kendra came together to host a grand event at “Mahamana’s Bagiya”.

Adi Sankara’s guru Govindapada commanded him to go to Varanasi once the monsoon was over. “Holy men generally spend the rainy season in one place in the observance of the vow of Chaturmasya when they occupy themselves with meditation and study. After that, as if to render the earth holy by the dust of their feet, they travel from place to place during the rest of the year,” Govindapada said according to Madhava Sankara Digvijaya. The great parivrajakacharyas from Sankara’s time to now have walked, traveled the length and breadth of this country. Buddhist, Jain to Hindu traditions, there has been no staying in one place except for the months of “varshavas” or the “chaturmasya”. The sacred geography was laid out millennia before modern scholars looked at the sacred geography of India through the various yatras.

Can there be a conference on Yatra without invoking Adi Sankara, and Hari Kiran Vadlamani, Founder, Indic Academy paid tributes to him in the short speech he delivered. Brimming with ideas, he took the next step, announcing a plan for Yatra with Gurus, in the real tradition of learning from gurus that is likely to extend from ‘Weekend with Wisdom’ to travel with gurus. That the Yatra conference will be a continuing tradition was clear when Dr. Nagraj Paturi, Director, Inter Gurukula – University Center articulated possible and potential themes for many more conferences in future. There can be a discussion only on the doota kavyas, Dr. Paturi said. 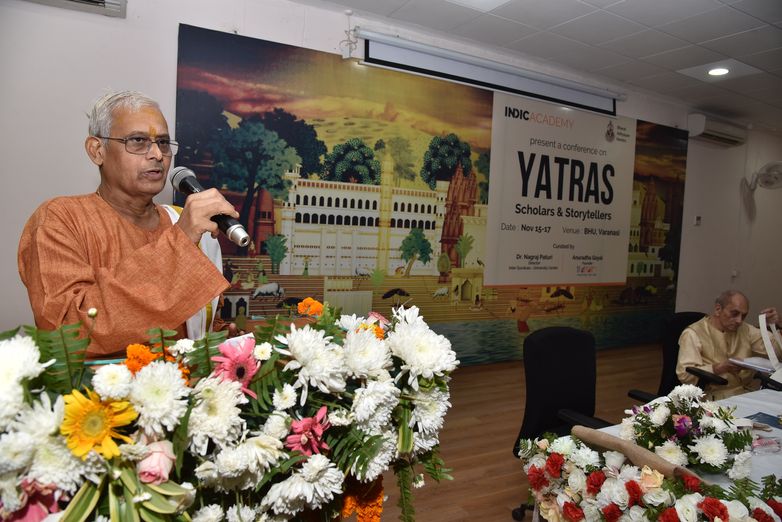 It was befitting that the inaugural session had a detailed view of the many yatras/parikramas of Kashi in the presentation ‘Kashi – The Eternal City’ by Prof. Sadashiv Kumar Dwivedi. Prof. Dwivedi, Coordinator, Bharat Adhyayan Kendra was a pillar of support for the Yatra conference. From the legendary parikramas mapped by Prof. Dwivedi in the inaugural session the conference moved on various landscapes and tirth yatras before ending with Dr. Vijay Nath Mishra’s ‘Ghat Walk’ presentation. “If we don’t walk our ghats, who else will” asked Dr.Mishra who along with enthusiastic Banarasis to walk the ghats, to live and learn the city’s heritage.

Ramayana – Ramayana yatra too had multiple facets. One was the special address by Y.P. Singh in the inaugural session. While Ramayana yatra within the country is well established through various temples and temple panels, sculptures, he tried to connect it to the global presence, be it the south east Asian traditions or yet to be established depictions emerging from Iran, South America, Turkey etc., Historians may look at it sceptically, but trying to look for a cultural connect was Singh’s aim in trying to explore the Ramayana connections in distant lands. Another Ramayana parikrama came through in Akshay Krishna’s presentation of the tradition in Kerala – 24 km pilgrimage covering 8 temples mainly undertaken around August. Far away from Ayodhya, but what a deep connect with Ramayana, and if there is a 5-kroshi yatra in Ayodhya, Kerala has its own temples and routes to cover. The scholars and storytellers painted that broad a canvas at Varanasi – From Adi Sankara’s Digvijaya to a village battleground where the local “theru koothu” or folk artists created the “padugalam” or the battle finale of Kurukshetra taking the villagers on a trip to witness the great war.

The session on Yatra and Wellness had an amazing overview of as well interesting insights to follow, pursue and experience. How to connect the concept of the ashtanga in yoga with the temples, deities and travel through it – Sivanandan D S and Amritha Jayam mapped it and it can be a virtual template for others to follow and create their own circuits in the experience of ashtanga. Earlier in the conference one heard about the concept of the traveling deity, the Utsava murtis in south Indian temples. Alamthuruthi Bhagavati’s yatra into the inner sanctum of Sri Vallabha at Thiruvalla is a journey of Kundalini through chakras, explained Rupesh K and Sooraj M S. How many, how many yatras there are to follow, to undertake, and one conference brought so many of them together.

Scholars from Maharashtra highlighted sacred texts, sthala puranas, folklore to present some of the most important yatras of the region. Varada Avinash Sambhus visually records the women varis to challenge the concept of modern feminism. Prachi Amogh Moghe traced the development and practice of the Khandoba Folklore, the temples and travels involved in the Khandoba worship. How have the places of worship themselves evolved to cope up with the yatras, yatris, architect Chinar Ravindra Balsaraf brought that out with the sacred scapes of Pandharpur. In the Godaparikrama Madhavi Raghav Narsalay and Mrunalini Shridhar Newalkar took us through the Godavari yatra, the sites, the references and also linking the sacred to the practical and how the ancient tirth yatra can be applied now for a rejuvenation of spaces, commerce and livelihood.

Chetan Patel had talked about yatras of discovery, learning – Shodh Yatra. Neer Katha by Nikita Teresa Sarkar added another dimension, combining yatra with art and performance. The practical aspects of yatra, and how new and newer experiential yatras can be designed were part of a separate session. 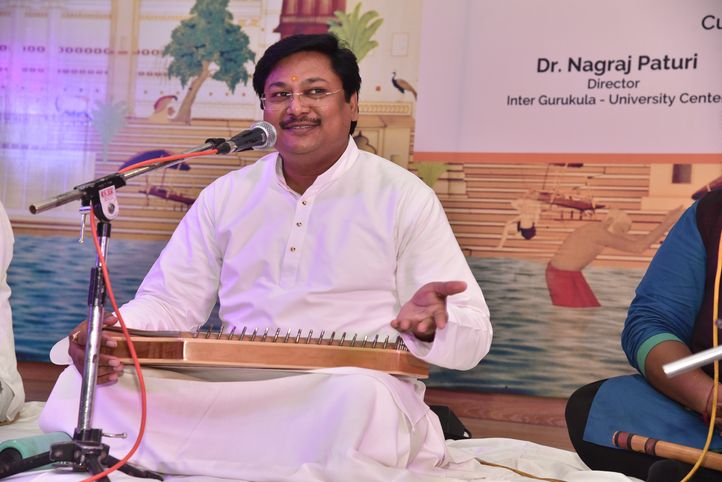 It is impossible to crunch a three-day seminar and the nuances and detailing of each one of the papers in a small report like this. One can only wonder at the vastness of the Braj history, sacredness of its geography and the puranas and mahatmyas associated. Indeed, it was befitting that Braj had a full session devoted to it five different papers. Don’t miss the papers when they get published, for not only Braj, but each one of them.

From the Goddesses of Himachal Pradesh, a glimpse of which one got through the videos Divya Prasad Iyer had captured through years of following and living in a real Devi Bhoomi was an unforgettable experience. The distant Himalayas came close, as do the Gods who willingly travel to meet their devotees there.

Kerala’s 13 abodes of Rurujit Kali, and the Kashmiri Tantra in Kerala, the paper on Wayanad – Land of Penance showed how with the small geography lies great treasures for sadhakas to explore.

Last, but an important point to highlight about the Yatra conference is the stage it and scope it offered – For a 19-year old pursuing undergraduate studies in Physics to present a paper, for scholars to speak without hesitation on what happened to a Nalanda, or the temples in Malabar. Prateek Pattanaik, a young student from Odisha sang, showed the representation in art, the Jagannatha kshetra Yatra. Sooraj Rajendran recounted travellers’ tales to show what happened to Nalanda University. Did invaders burn or just the local schism that burnt down the world-famous university Rajendran asked presenting the evidence. Not all Yatras are a celebration, but a soft spoken Aiswarya Mohan had the guts to show what havoc the voyage of Tipu Sultan’s sword wrecked across Malabar. 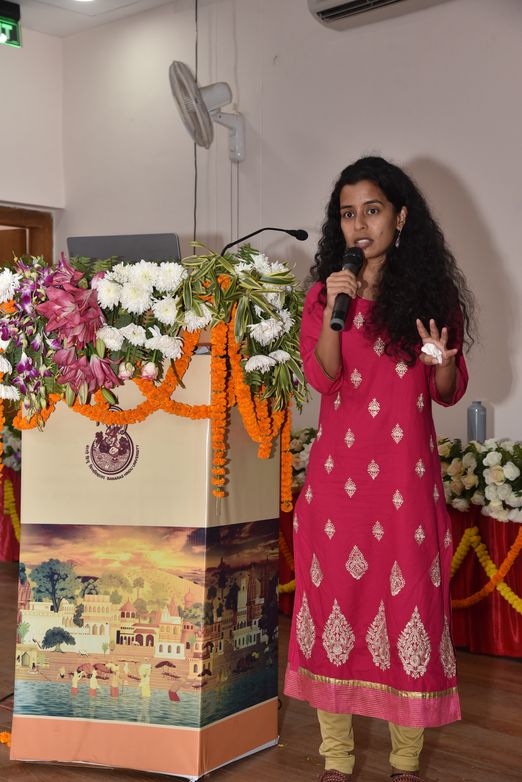 Just one conference has given more routes than what one can journey in a lifetime, several ideas in terms of themes, circuits and excursions to implement. Yet, Indic’s journey one is sure is going to be long – many more conferences to comes, many more texts and travels cover in coming years.

This post is a reflection and report on the recently held Conference On Yatras, which was organized by Indic Academy’s Indica Yatra at BHU, Varanasi.