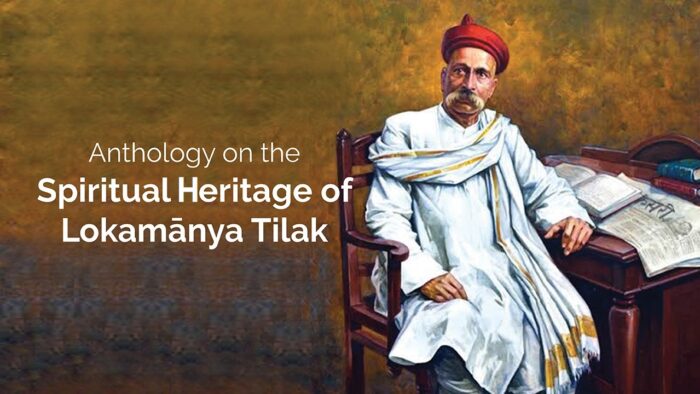 Our great country Bhārata, a home to the oldest living civilization of mankind is celebrating the Amṛta-mahotsava – a journey of 75 years since freedom from centuries of foreign rule.  It is also a good time for self reflection as we endeavour to balance the aspirations of the people going forward with the revival of ancient, yet eternal cultural and spiritual ethos that has guided our polity, economy and society for several millennia. Bhārata’s glory of being the Viśvaguru is essentially due to this eternal ethos that is inherently universal and altruistic.

This puṇyabhūmi has borne many brave-hearts who were even willing for the ultimate sacrifice in the service of the nation – one amongst them was Lokamānya Bāl Gangadhar Tilak.  Popularly known as “The father of Indian unrest” he popularised the quote “Swarajya is my birthright and I shall have it”.  He understood the link between culture and politics and hence he worked towards instilling a sense of pride in the cultural heritage and glorious past among the youth which in turn fuelled the sense of patriotism in them.  Hence Tilak has a unique distinction of being one of the first leaders who envisaged the political freedom of Bhārata to be concurrent with the restoration of its cultural and spiritual ethos. A spiritual, intellectual and political giant that he was, his writings and speeches were heavily influenced by the teachings of the Bhagavad-Gītā, the Vedānta-sūtras and the Mahābhārata. Gītā-rahasya, his magnum opus is the perfect example of his deep understanding and judicious interpretation of Hindu philosophy, especially the karma-yoga. His brand of nationalism was inseparable from the sense of spirituality which is the very Ātmā of our civilization. He was one of the few farsighted political activists who realized the potential of religion and spirituality in nation building and relentlessly strove to build a modern India rooted in its ancient values.

It behoves us as the children of this sacred land to celebrate the unsung legacy of the sagacious leader and draw inspiration from his works to restore and reinvigorate the spirit of Dharmic nationalism as envisaged by the likes of Tilak, Svāmi Vivekānanda and Śrī Aurobindo.

In this 76th year of Independence,  we propose to bring forth an anthology of  commentaries on the Spiritual heritage of Lokamānya Bāl GangadharTilak and  it is our earnest appeal to scholars and authors to study and  to reflect upon the spiritual views of Lokamānya Tilak as reflected in the Gītā-rahasya, his speeches and writings.

The works of Lokamānya Bāl Gangadhar Tilak noted for their profundity of philosophical, spiritual and dharmic thoughts made the ancient wisdom of our Ṛsis relevant in contemporary times. These works provide ample scope to researchers to rephrase some of his ideas for the current times. Some of the themes that may be explored are as follows:

We invite all Indics to submit their articles based on the above or similar themes centred around ‘The Spiritual Heritage Of Lokamānya Bāl Gangadhar Tilak.’

The anthology will be curated by Dr. Yogini Deshpande and Dr. Sriram N Iyer

Articles will be accepted in Word Format only in English submitted to editor@indictoday.com

Please note that the last date for submission has been extended to March 31, 2023