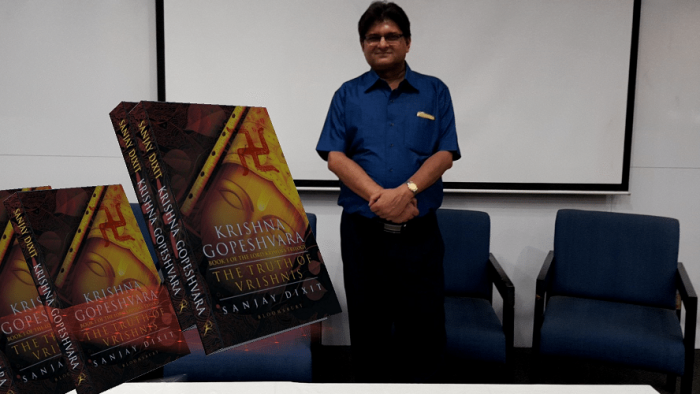 Sanjay Dixit an avid political commentator and now an author is also currently the Additional Chief Secretary to Govt. of Rajasthan.  He is the founder and chairman of The Jaipur Dialogues Forum, that hosts major events on many scholarly topics. He was the Ex-Secretary General and Ex-President of the Rajasthan Cricket Association as well as the Ex-Member of the Finance Committee in the BCCI. He is a frequent columnist, writer, speaker and author. Bloomsbury has published his book on 29th May 2018 and the ebook version was made available on 30th June 2018.

Sri Mohandas Pai was the former Director of Infosys. He also served as its CFO and Board Member as well as worked as the Head of Administration, Education and Research, Financial, Human Resources at Infosys Leadership Institute. Sri Prasanna Viswanathan as the CEO of Swarajya Magazine has recently met and interviewed PM Narendra Modi.

The event was organized at TERI Auditorium in Domlur Bengaluru. Author Sanjay Dixit spoke in the beginning and gave a brief introduction of his book and the motivation behind the book. General apathy and ignorance among practicing Hindus Krishna being Yogeshvara. He felt it was necessary to bring long forgotten lores and Bhakti studies to the younger crowd which lead to the idea of the book. An engaging question and answer session followed in which Dixit explained many aspects of mythology to the audience. 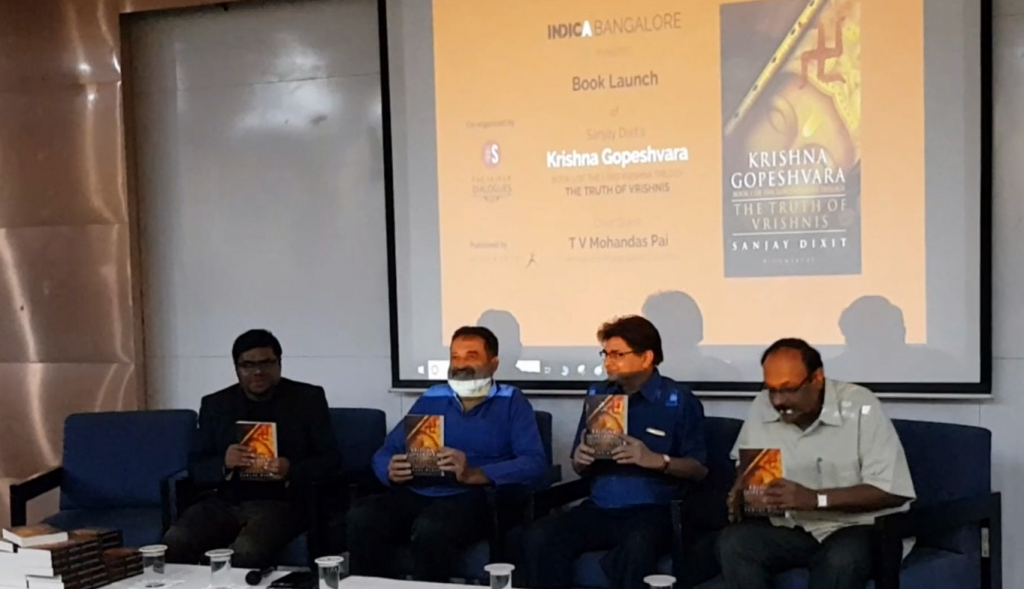 The audience was intrigued by the fictional character Kutil Muni, who is portrayed as the advisor of Kamsa who made him into an evil tyrant. The book has a subtle criticism of the exclusive monotheism of Abrahamic cults through Kutil Muni who is similar to any Abrahamic prophet and consequently Kamsa being similar to any Abrahamic ruler who use the exclusive Abrahamic ideology to spread tyranny in the world for the political domination of the world. Sanjay clarifies that the character represents any person who propagate violent ideologies through physical violence and force irrespective of religion or political affiliations. Thus he could represent the left leaning Breaking India forces in India, the Urban Naxals or the religious extremists like those part of the ISIS.

Other questions made Sanjay to reveal the differences between Dharma as practiced by Yudhisthira which is more idealistic and theoretical in contrast to the Dharma as practiced by Krishna which is more practical and realistic. He stresses that Krishna Dharma is more relevant to the current world than the Yudhisthira Dharma. He also contrast the difference between Rama and Krishna. While Rama is maryada-purushotama and an idealist, Krishna is more practical and solution focused with his principle of Karma Yoga which he explains in his Bhagavat Gita.

Krishna is not an exclusivist, which he reveals in his Gita. Chapter 18, verse 63 of Gita says:-

Thus I have explained to you this highly confidential knowledge. Deliberate on this fully, and then do what you wish to do.

This advice to Arjuna is in stark contrast to the religious exclusivism found in Abrahamic cults, which forcefully proclaims only my way is the true way and others are damned to hell. This is the significance of Gita and the philosophy of Krishna which is also the essence of Sanatana Dharma, which is known to us as Hinduism. A new form of book launching, using digital technologies was tested during this event. A huge sized virtual book was displayed as hovering over the audience crowd as well as in the central hall of the mall. Other features like rendering of virtual event posters, flex and banners of Indic Academy were rendered as if they existed in the real world.

The event was planned for one hour but extended to half an hour more. Subsequent to the event Sanjay was seen signing the books purchased by many among the audience. After spending few more moments with the public he asked leave. On the next day he met more of his fans and signed books for them at Crosswords, Bengaluru.

Apart from Indic Academy, the Jaipur Dialogues contributed for the event. Swarajya was the media partner covering the event and providing publicity. The publisher Bloomsbury provided the copy of books which was displayed at the event.

Indic Academy sincerely thanks all the participants of the event for their time and all those who provided social media support in Facebook and twitter. Indic Academy sincerely thanks TERI auditorium staff for their support and coordination. We thank Sri Mohandas Pai for spending his valuable time with us and becoming the Chief Guest of the event. We wish all the best to Sanjay Dixit for his entire trilogy.